Almost a full year after the release of Episode 1, the Tales from the Borderlands series came to it’s conclusion in Episode 5 in October. The full story arc follows the past exploits of Rhys, struggling mid-level employee of arms manufacturer Hyperion, and Fiona, con woman extraordinaire on the planet Pandora. If you read my first review here on the Game Den, you’ll know I was quite taken with the melding of the deranged Borderlands universe with Telltale’s lovingly crafted storytelling. Here is a look at the entirety of the series. 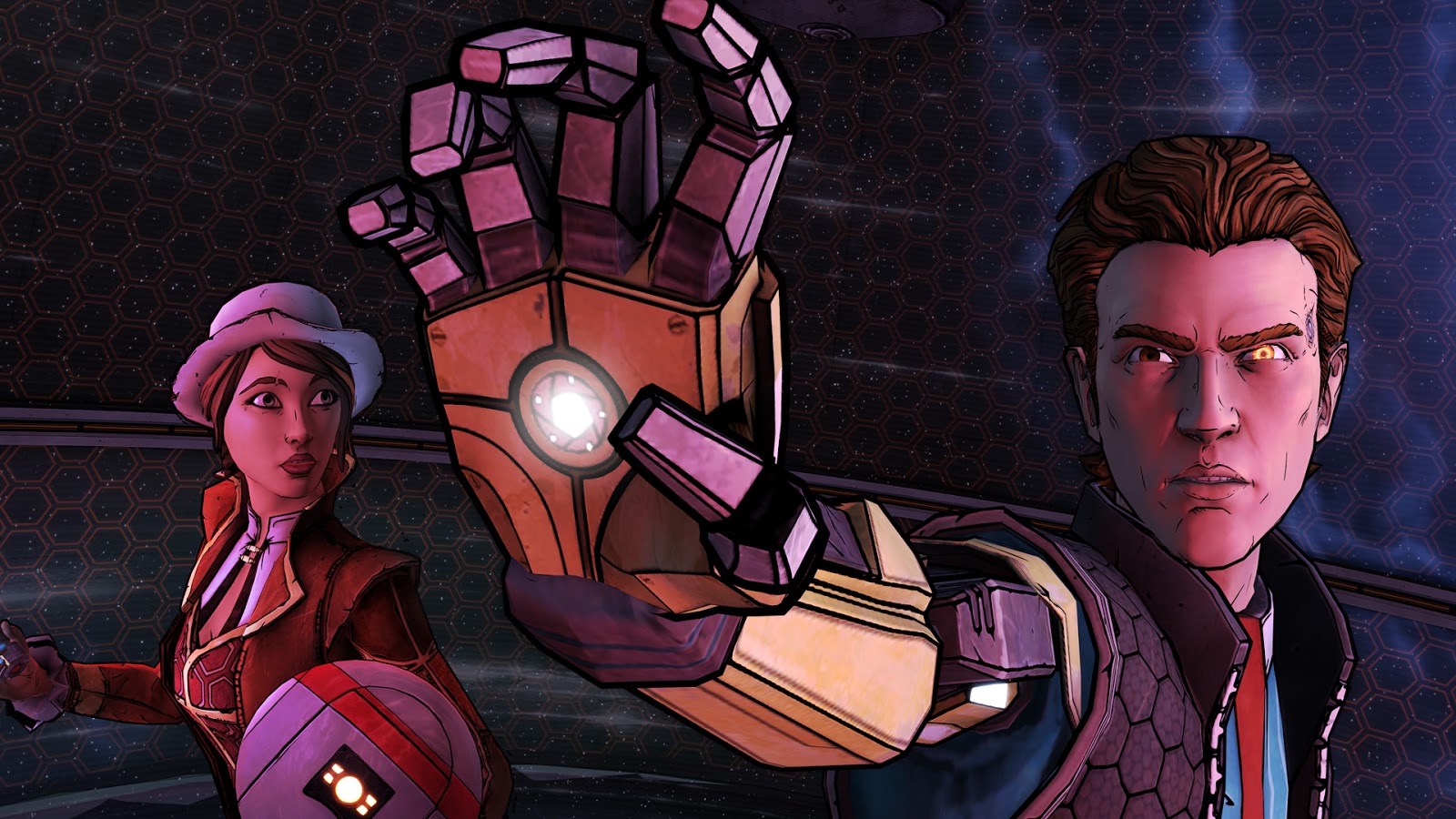 Delving into narrative details is a little tricky with a game like this, as so much rides on the plot as it twists and turns between episodes. The general flow is centered around Rhys, Fiona, and Sasha’s search for the Gortys project, and the elusive vault that it will unlock filled with unfathomable treasure. Stymied by the electronic “ghost” of Handsome Jack stuck inside of Rhys, rival crime queenpin turned vault hunter Vallory, and the vaults beastly guardian, actually seeing your way through to the vaults riches is a tall order requiring the whole games cast to act together. It’s a bit of a winding and bumpy road from onset to conclusion, but one that is generally enjoyable.

Characters and their dialogue being the true driving force of this season is something that cannot be overstated. Troy Baker, Laura Bailey, and Dameon Clarke (as Rhys, Fiona, and Handsome Jack, respectively) bear the brunt of the conversational burden, but are all up to the task in their archetypal roles. The supporting stable of characters are all caricatures with voice talent and script to to fully realize them. Ashley Johnson’s curious and childlike Gortys robot, Chris Hardwick’s enthusiastic assistant and sidekick, Erin Yvette’s strong yet skeptical Sasha, and even Raison Varner’s calculating and concerned Hyperion Loader Bot round out a diverse, exciting main cast. Even some familiar faces from past games make an appearance, with the requisite actors attached – though generally in much smaller roles. 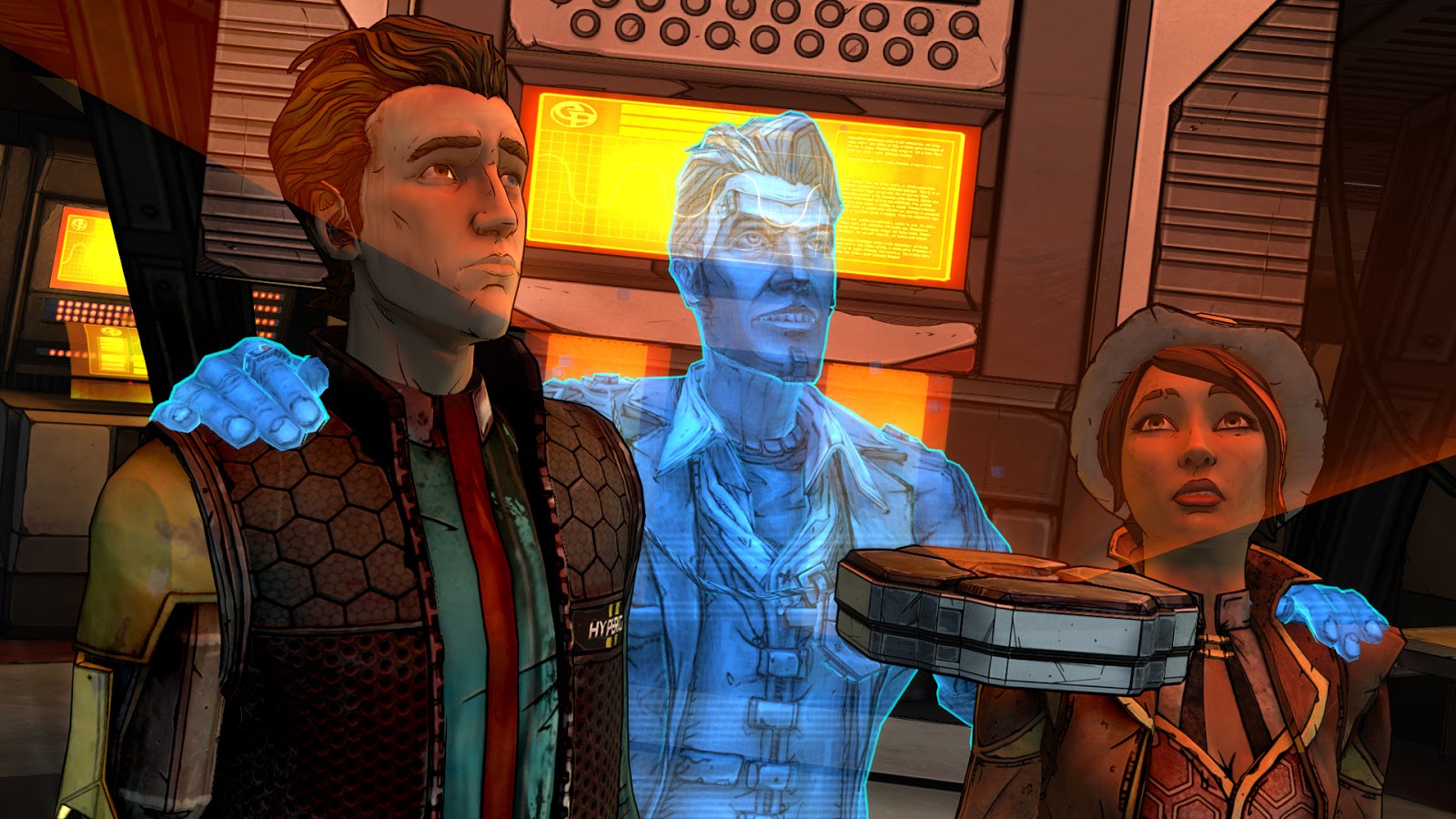 Various set pieces throughout the game, and the ways the player is allowed to interact lead to my favorite scene from a game this year – as well as some very frustrating outcomes. Player interaction is the standard Telltale variety, with heavy focus on choosing between two to four conversation options, with quick time events and super light exploration sprinkled in to keep the player involved. What could have been a fairly throwaway scene in a Hyperion lobby turned into a hilarious action movie montage which I can only describe as “the Finger Gun Massacre.” One new addition is Fiona’s newly acquired ability to better analyze a situation before diving in, taught to her by her custodian Athena. This manifests in two possible outcomes, portrayed by faint silhouettes and still imagery. While these are few and far between, it is quite hard to interpret what those outcomes really are, and it seems that the choice bares no ill consequence for a “wrong” one. More baffling, some outcomes open up loose ends that never resolve.

Concerns with this game don’t stop with unresolved outcome from player choice, but extend much deeper, most notably on the technical side. Some pivotal decisions in the story line have consequences that, as a player, I felt should have been more readily avoidable. And some actions do not even provide player agency at all, when at least two of them should have had wildly different options available – but that can all be chalked up to a desire to tell the story with a set path in mind. What really hinders this game is the engine it is built on, and the production pipeline at Telltale. Animations being herky jerky or lifeless, poor load times, weird texture issues, and wildly varying audio levels (even within the same scene) might be excusable for a first stab at an episodic game on a tight time frame. 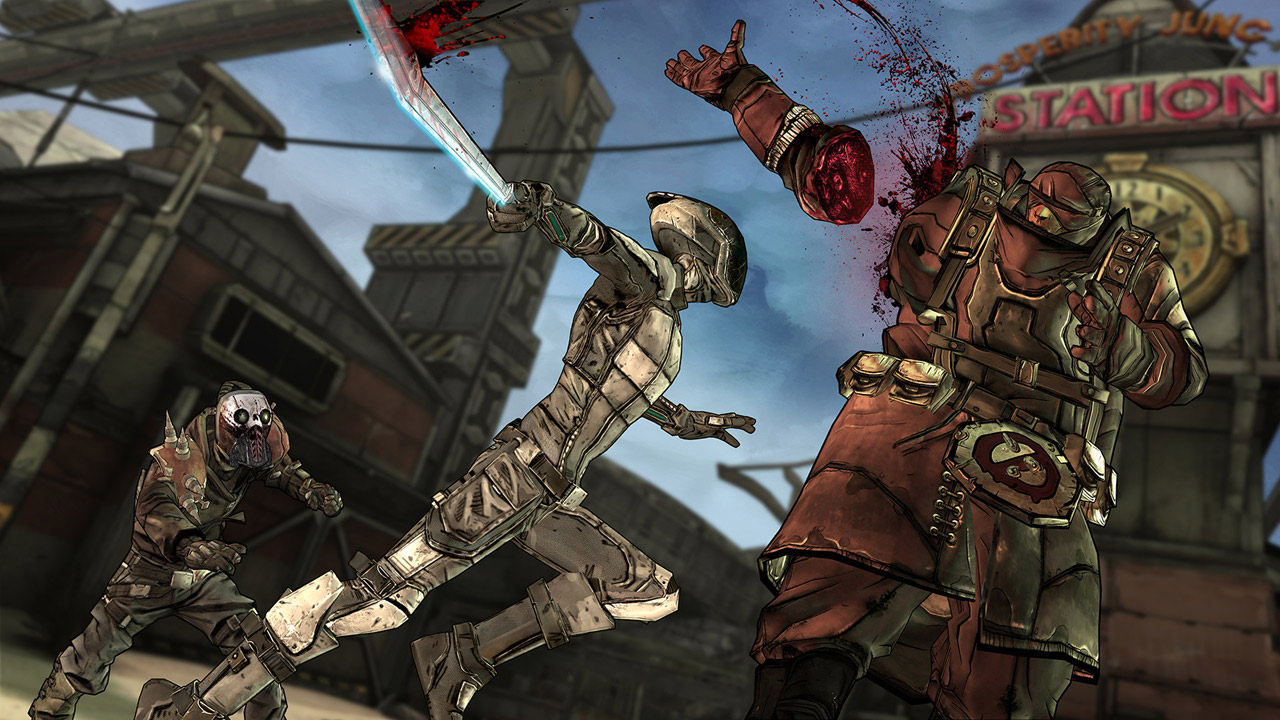 But 5 episodes over 11 months from a company that has many other successful offerings removes that cop out. Worse yet, there were whole lines of dialog where the audio was so low that important plot points would be missed without subtitles. Three times, the game hard locked and required a console restart. Transitions between scenes, even after a long load, ground the game to a halt so often that I frequently thought the game locked up again, and even effected input time for new decisions. A real lack of technical polish shows that the bones of these games are really collecting dust, and truly detract from overall enjoyment.

The whole Tales from the Borderlands season is absolutely worth checking out, but technical issues and odd narrative conceits hold it back from being a first class experience. Excellent dialog, characters, and performances are what really carry the 8 hour experience. The occasional hard-locks, extreme stuttering and hanging between scenes, frequent audio issues, and general age of this engine on the 360 are a frustrating exercise in patience that sully the package. Given the chance, playing on a PC or current gen system is reported to be a smoother experience. This is a series I am excited to see more of, but not without some big changes to their content pipeline and backing technology.