Yoshi might not be the draw that Mario is for Nintendo, but the little guy has a pretty solid history and Yoshi’s Woolly World continues that trend nicely. Visually Yoshi’s Woolly World is a delight and the levels are often creative and most importantly, fun – even if it really is nothing all that revolutionary. There is a comfortable feeling of familiarity that serves as both one of Yoshi’s Woolly World’s greatest strengths, but at the same time, as a weakness as well. You platform about, gobbling up pretty much everything and anything as you take on familiarly adorable bad guys – but now Yoshi’s meals turn into balls of yarn instead of eggs.

The standout feature here is of course the beautiful visuals. At first glance I was reminded of LittleBig Planet, but really Yoshi’s Woolly World is so much more beautiful. The knitted aesthetic stands out with is vibrant colors and intricate levels of detail. A yarn windmill spins platforms in a lazy circle against a backdrop that includes a lush-looking green landscape and impossibly fluffy white clouds set against a gradient blue sky. Charming, downright beautiful, Yoshi’s Woolly World is simply delightful to observe whether you are playing the game or simply an observer. Kirby’s Epic Yarn made good use of this aesthetic when it came out, but Yoshi takes everything further and the result is better by a long mile. 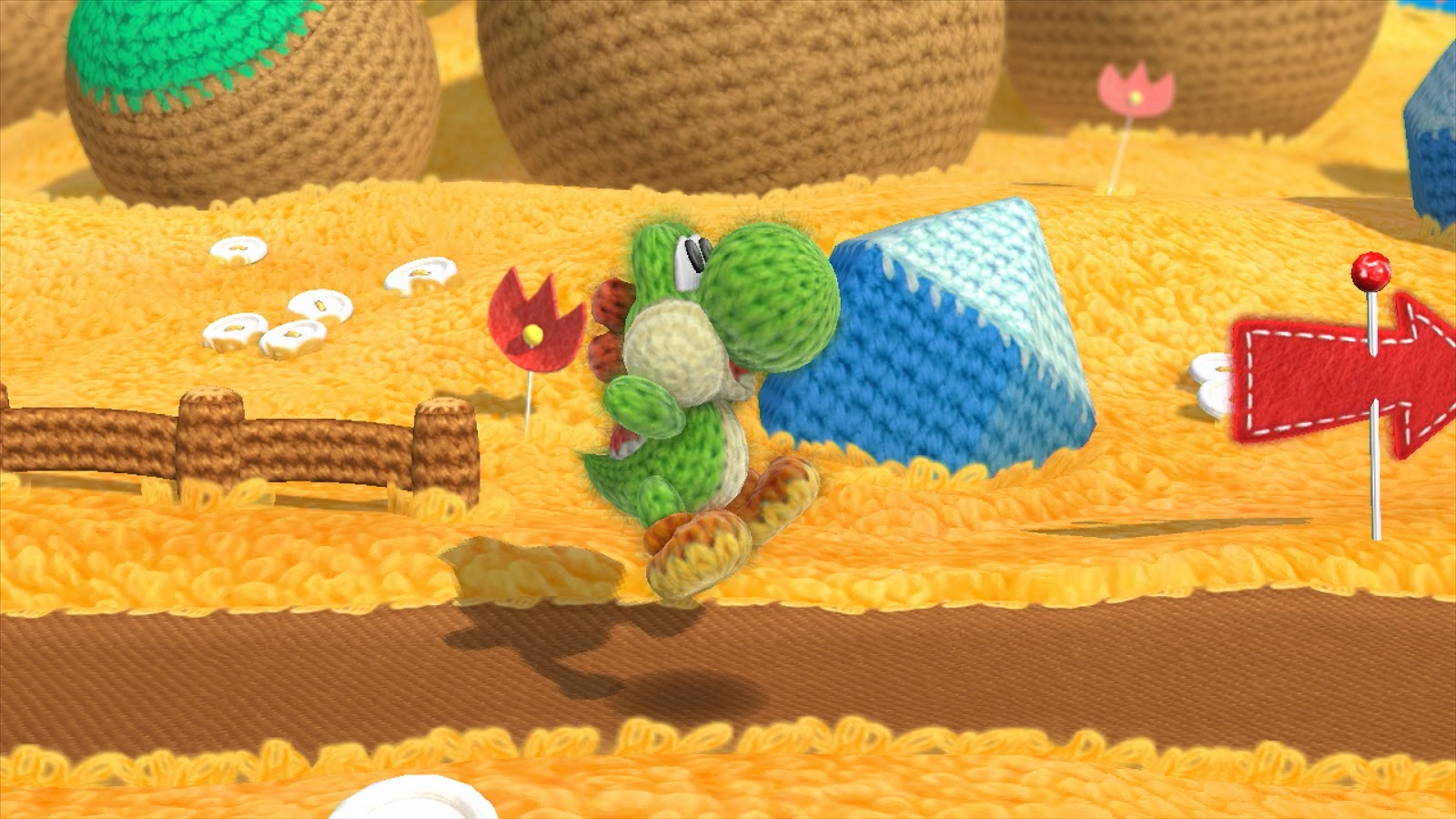 At first blush, the level design appears almost too simple. This is a platformer in every sense of the word. Precision jumps, timing and use of momentum are all factors in your ability to progress, but really Yoshi’s adventure is not a terribly challenging one. However, if you enjoy grabbing collectibles – something that is completely optional, but really provides the only serious challenges in the game – there is plenty more to do. The level design is actually quite clever when you take the time to explore and look for things, allowing it to shine. But for those more interested in simple progression, you might beeline through the stages and miss out on some of the more interesting ideas built into the stages.

The multiplayer component reminds me of so many other similar games. Having two people playing at one is both a curse and a blessing, as it allows for players to work as a team to accomplish certain goals more easily (especially as it pertains to some of the trickier collectibles out there), but of course a partner in crime is also a tax on some of your on-screen resources or impact one another negatively. However, Yoshi’s Woolly World certainly has younger gamers in mind, with options like “Mellow Mode” that allows you to flutter around, or the earning of badges to make stages easier. Of course, like the drive to grab collectibles, this is all completely optional. 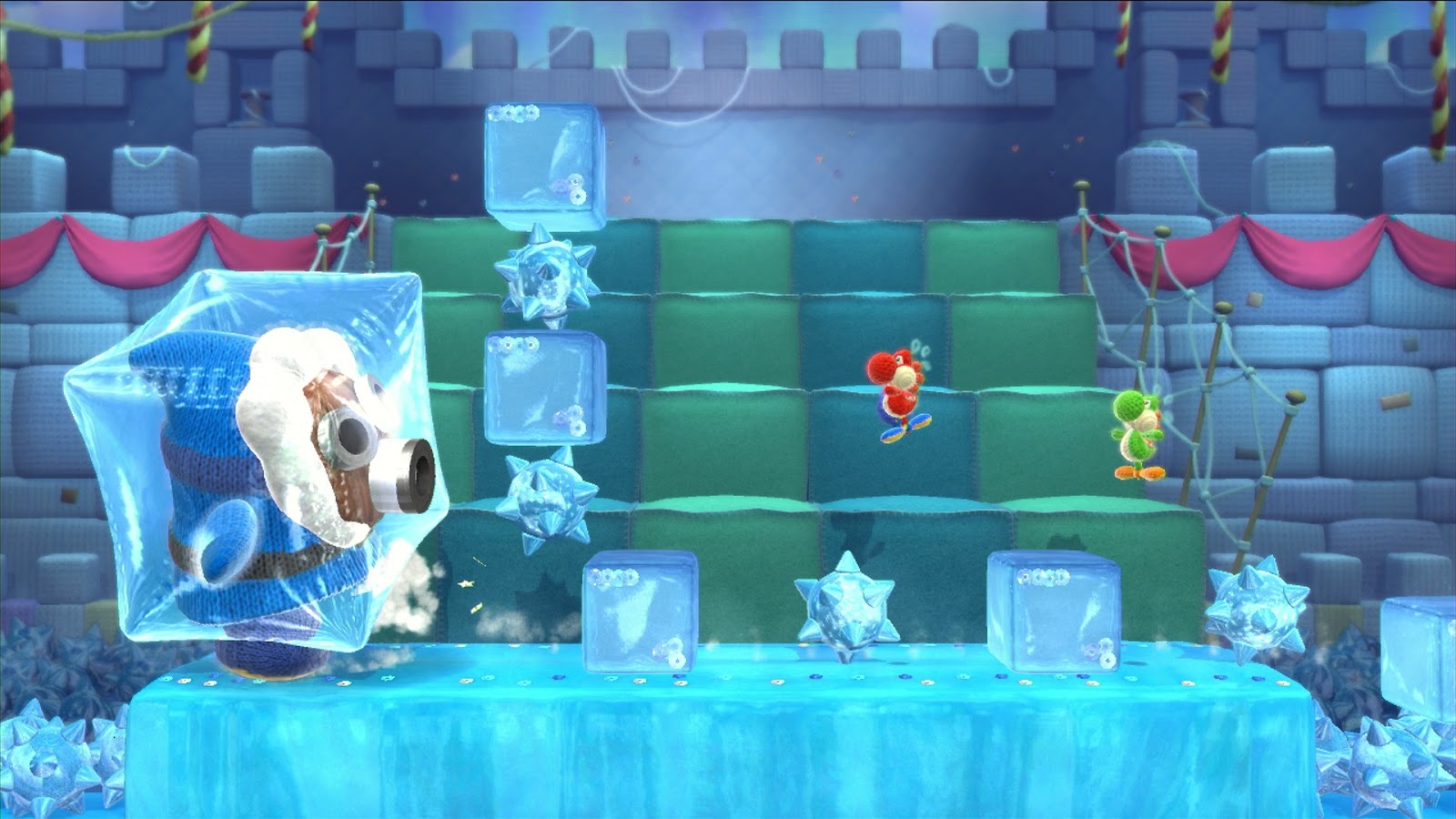 The boss battles however, were a letdown for me. They were easy, which given the target demographic makes sense, but they also feel uninspired. They do not really make use of the knitted world in ways they could have. That means that the level hopping can become somewhat repetitive since the boss battles do little to spruce up things – especially if you decide to forgo the collectible hunting. That leads back to my earlier paragraph – there is just very little new here, outside of the charming visuals. It is still fun – my daughter and I played through it in a couple of days, but after a time that feeling of having been there and done that began to creep into the game and I never really could shake it.

Thankfully for those who have a collection of Amiibos (and we certainly have a sizable one), should enjoy how the feature is leveraged here. For starters, that Woolly Yoshi Amiibo is freaking cute. Scanning in a Yarn-oshi brings in a second Yoshi to mirror you. Obviously this is the most practical application, but if you have other Amiibos, a skin gets applied to your Yoshi – not unlike the mushrooms for the 8-bit Super Mario Bros stages in Super Mario Maker.

Because Yoshi is attempting to be very accessible, its level design can feel almost too simple and forgiving at times. You have to want to collect the items to really get the most out of the stage design. As a game for kids, there is a delightful charm here that when coupled with the ease of gameplay that makes Yoshi’s Woolly World an absolute winner. More skilled, older players will no doubt find the offering to be a cute one, but one that is ultimate slightly lacking once you have spent several hours with the game.