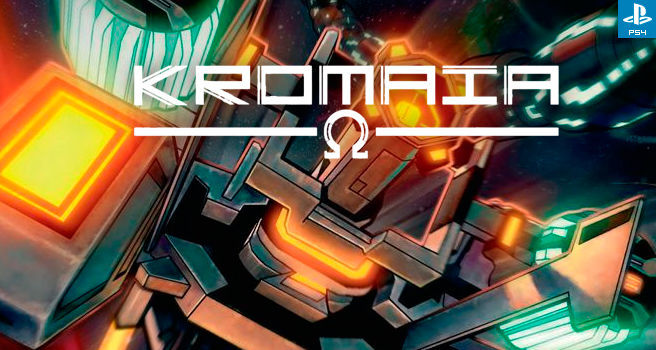 Throughout my early gaming years, Shoot ‘em ups were up there with JRPGs as my favorite and most frequented genre. I owe this affinity to my brother’s copy of Super R-Type, a side-scrolling space shooter that insulted my hand-eye coordination and working memory with swarms of positionally patterned enemies and their respective barrage of blinking bullets. Infuriatingly difficult at all moments and forgiving only when the game’s cartridge was lunatically removed from the SNES, Super R-Type introduced a 7-year-old me to a universe of space battles that required reflexes, patience, and a reluctant acceptance of momentary failure.

While Super R-Type established my relationship with SCHMUPS in the early 90’s, Kromaia Omega currently symbolizes the genre’s diverse design philosophies and continued evolution. Shoot ‘em ups, by broad definition of the sub-genre, can implement a variety of design decisions based on screen movement and point-of-view, both of which assist in granting individuality to each title, despite the shared interest of blasting everything that frolics into and around your crosshairs; however, few combine 6 degrees of freedom with an adapting frontal onslaught in the way KO does: the skirmishes are hectic, the vessels control like a robotic engineer’s daydream, and the visuals, while simplistic, evoke exploration and retro appreciation with sharp geometrical shapes and stage-thematic color palettes. But a lack of weapon, stage, and enemy variety along with a campaign that may seem artificially lengthened keeps KO from completely simulating the enjoyment and longevity of the SCHMUPS it celebrates and expands upon.

If solo civilian space travel existed and I could choose a craft to pilot beyond the sparkling mane of the Horsehead Nebula, I would select one of the vessels, or Armors, in KO as my celestial star chaser — not because of their electric colors or sleek, Tron-esque designs but because these Armors turn, ascend, yaw, and pitch with more precision than a hovering, time-traveling DeLorean. When you need a blast of speed to compliment an evasive maneuver, these Armors zip nearby debris into a blur with frenzied application of the boost feature. And when you require firepower to incinerate a swarm of bogies dumb enough to play Chicken in zero g-force, the four main Armors (I know for certain that one is unlockable) mostly give you what you need. Each craft wields a unique set of primary and secondary weapons that necessitate an attack strategy distinctive to the respective vessel. Where one craft’s machine gun-shotgun combo leaves room for aggressive, improvised dogfights, another craft’s laser cannon begs for an attack stratagem that is a little more thought out and an aim that is a lot more accurate. 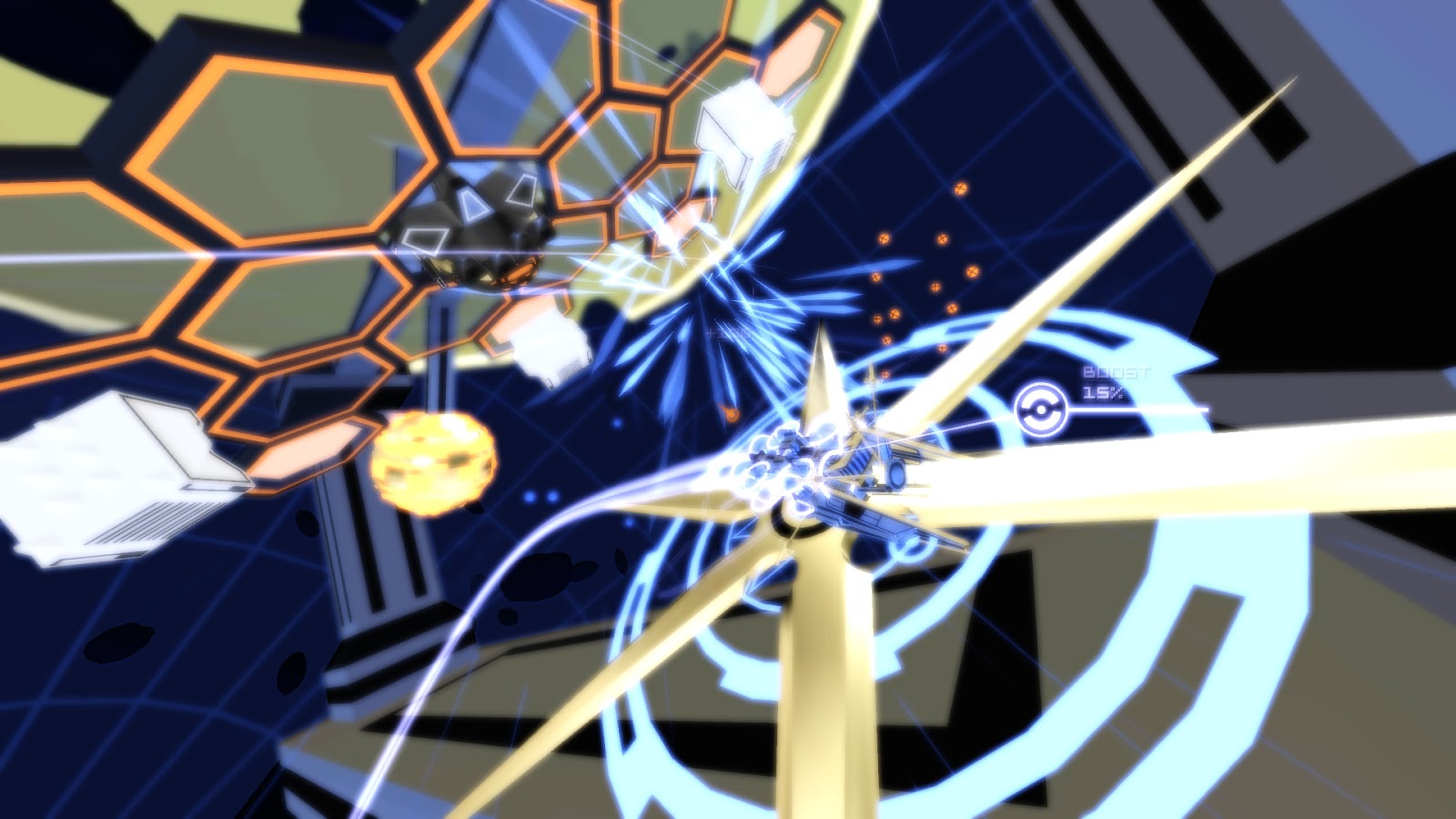 You’ll need both accuracy and shimmering balls of carbon fiber if you want to survive a space skirmish with all of your trigger fingers functional. Well, those attributes plus a reliable navigation tool, for the basic formula of KO goes like this: you soar throughout a dilapidated starscape, twirling and spinning like a bat with malfunctioning sonar (to test out the physics and adjust to the controls, obviously), collect twenty orbs, and on collection of the twentieth orb, a boss battle with a grand but oppressive deity commences. With each orb you collect, the more enemies that crowd your HUD, and the more belligerent they become with the impetus to dismantle your shield with whatever they can use as a projectile. And so, back to the navigation tool I mentioned, your vessel projects a small compass display that keeps tabs not only on your objective (the closest orb) but also on the most threatening enemy or horde of enemies.

This tool is an absolute godsend (unless you enjoy getting riddled from unforeseen directions), since it’s not only the collecting of the orbs that instills a greater sense of antagonism in your foes; the more successful you are at dodging their attacks and firing them into obsolescence, the more enemies and bullets the game lobs at you. Progress and skill, as they are, make the game more difficult, more entertaining, and more SCHMUP-like. Even so, it takes some time to actually experience and appreciate this concept until you replay all four of KO’s stages, and this can also be the point where the adventure’s initial exhilaration can begin to decelerate and possibly plummet.

Upon slaying the final deity in the fourth stage, the cryptic voice that guides you on your quest for deicide basically says, “Great job, you burly-armed celebrity pilot! But didn’t I tell you from the beginning? If you want to REALLY set yourself free, you’ll need to conquer each stage with all four fantastic ships! Only then will you unlock access to the final god, silly.” This is where the sense of artificial padding comes in regarding the length of the campaign, but believe me when I say that if you enjoy the flight and shooting mechanics, you probably won’t mind. The four Armors’ weaponry are unique enough from one another to elicit new strategies for the few distinct enemies, especially the bosses, each stage harbors. 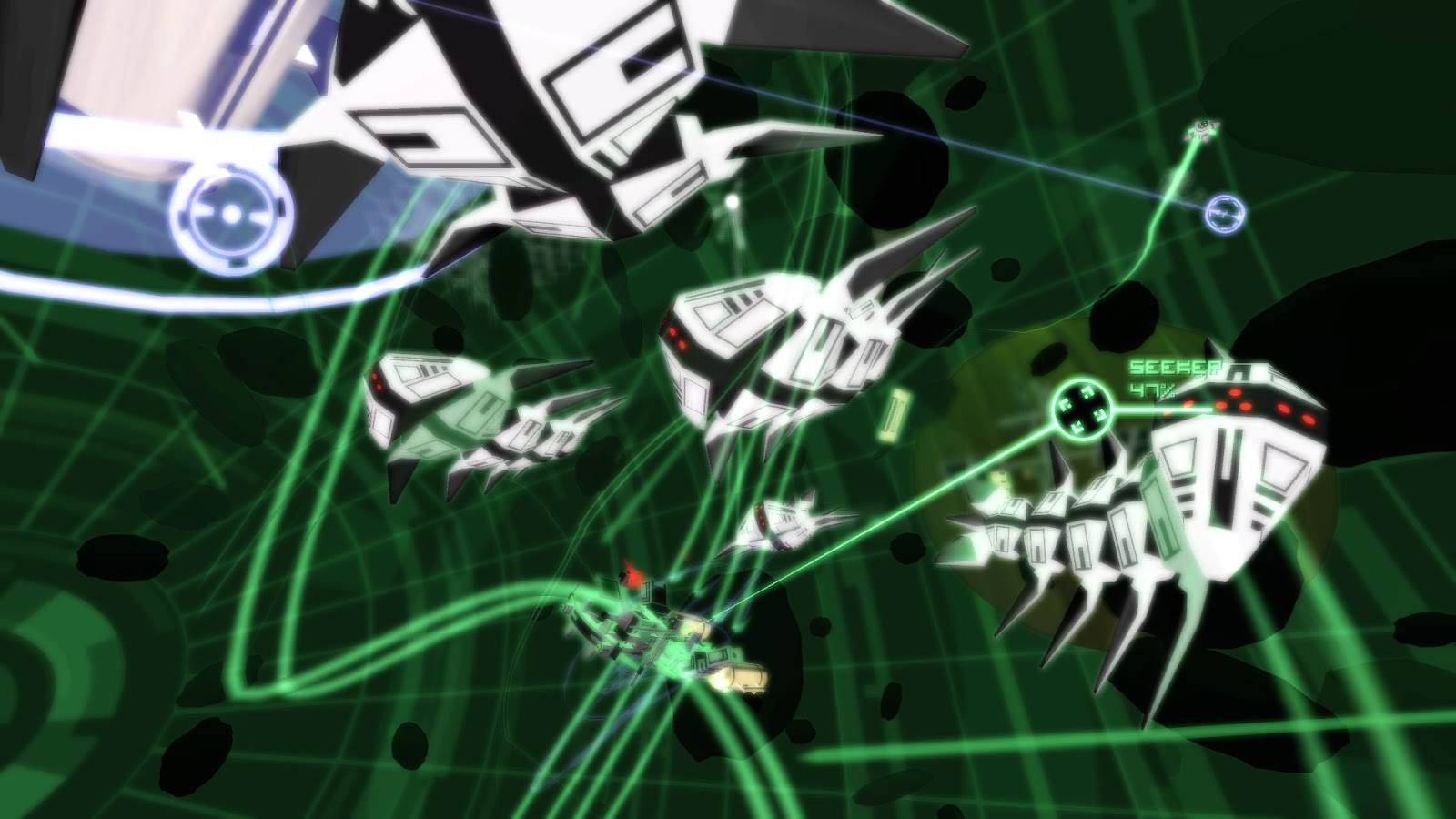 Re-exploring these worlds brings up other issues regarding enemy and weapon variety. For me, the best features of modern Shoot ‘em ups are coming across new and flashy and demolishing weapons, and being gradually introduced to new and threatening and dangerous foes to test them on. While being forced (and feeling compelled) to retrace my steps through the levels, I realized that I never really detected a sense of either aspect in KO. Although there is a semi-effective power-up that morphs your craft into a souped-up facsimile of Galvatron’s cannon form, which sprays what appears to be a purified stream of purple rain, the only guns you’re bestowed with are the ones native to your ship. And on the subject of enemy variety, the bosses are the only ones with designs and attacks riveting enough to really be worthy of recall. It’s not that the regular goons are poorly designed pushovers. It’s just that, after your initial run through the stages, you’ve seen what these guys have to offer, and it would’ve been pretty damn glorious to be gifted with a few additional enemy classes on subsequent playthroughs, especially since said playthroughs are mandatory to truly beat the game.

Even with what I perceive to be shortcomings, I have to recognize that KO isn’t trying to emulate every other Shoot ‘em up. It wishes, with its in-your-freakin’-face shootouts, to pay tribute to the genre and, with its refined directional freedom and adaptive difficulty, contribute its ideas to an established gameplay philosophy. And it’s mostly a success, certainly when it comes to blowing rivals into space particles. Really, if you are a fan of any form of Shoot ‘em up, Kromaia Omega might have the mission that sends you gleefully into bullet hell.