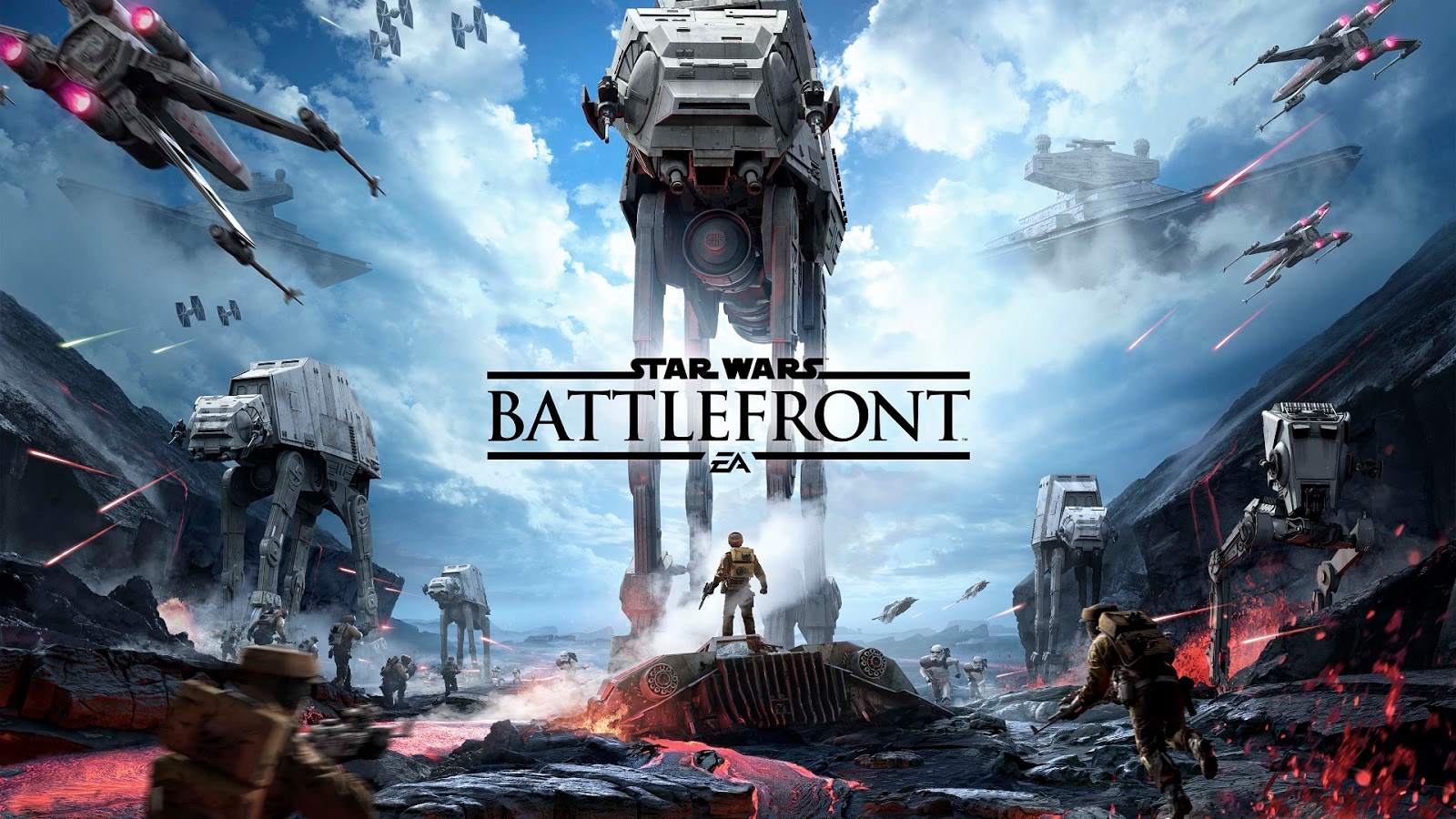 As you might know, there is a little movie called Star Wars that just released. Not too long prior, another small-time video game adaptation of the series also came out. Now of course, I say all of this with tongue firmly planted in cheek, because I am a huge fan of the Star Wars franchise and also thoroughly enjoyed the Battlefront games in years past. As a title paying its respects to the source material, Star Wars Battlefront succeeds on several levels. As an actual shooting game, the offering is solid, but unspectacular.

I grew up on Star Wars. As I near forty, keep in mind that these movies were a tremendous part of my formative youth. My den at home and my office at work is heavily decorated with Star Wars stuff that my wife and kids have picked up for me over the years. I read so many of the now no longer cannon books and comics in years past. Now that we have thoroughly established my adoration for the series itself, I can talk a bit more about this particular game. 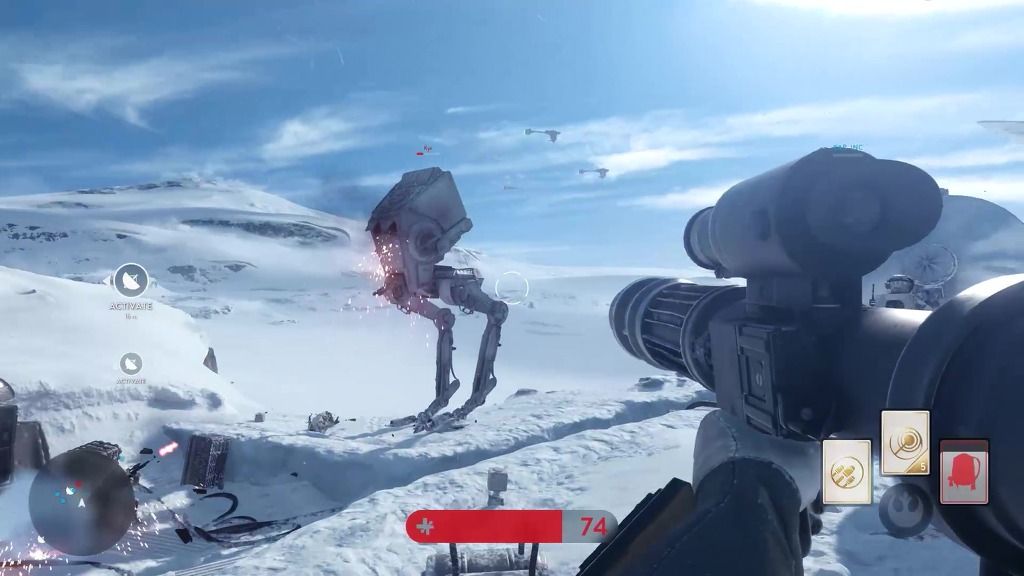 The music, the visuals, the characters – these hit home for me. Back when I previewed the title during its beta, I was blown away by the environments. In my Play Time coverage, I kept talking about little things that caught my eye, and nothing has happened to change my opinion since then. Running around Hoth is the stuff of my childhood imagination. Brightly lit lasers flying around the screen, punctuated by the familiar sound effects from the movies compliment those memories wonderfully. The sound design itself is spectacular. Play with a set of headphones on or in a room with full surround sound, and you will often hear key sound effects that help you determine which direction a threat is coming from. This is a very technically proficient game that is simply a joy to look at and listen to, right down to the little droid playing chicken with the AT-AT walker in the menu screen if you do not press a button within a certain amount of time.

The game itself is where things can get a little more controversial. Why? Not because it is a bad game – in fact, in many ways it is very solid if reminiscent to older shooters. The gunplay is accurate, movement is easy and maps are generally well designed. You gain levels and earn credits to unlock new gear, offering a very limited set of loadout options such as three different cards (think special abilities, like a quick shot pistol or thermal detonator) to a variety of different guns and some cosmetic options to individualize your character. This feels relatively lightweight however, when measured against the more recent Battlefield and Call of Duty games, that offer a good deal more progression with the characters and the weapons, as well as further customization options. 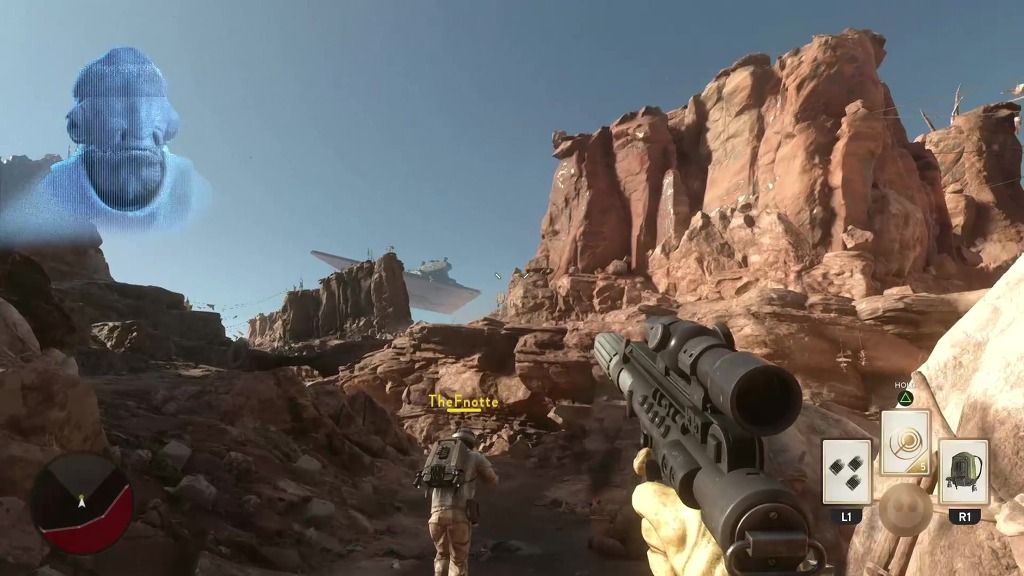 There was much concern over the lack of campaign, and I will admit to being disappointed by that myself. When it comes to shooters, I always start with the single player mode. It serves as a tutorial of sorts, but also helps to set the story and get me in the mood to play. That is completely lacking here. There are tutorial missions. There are a pair of single player modes that really are just ways to kill time – neither one is terribly interesting in and of themselves. The wave move/survival? We have seen that done before and better in other games.

So as expected, the majority of your time will be spent with the online multiplayer component. That makes sense since that is how it usually plays out with this genre anyways. Some of the modes are more entertaining than others. Aircraft took some getting used to on my part, but once I got the hang of them, they were a lot of fun. The heroes are a little janky to control at first, especially the ever popular Luke and Vader ones, but they are entertaining as well. The massive scale Hoth battle is still one of my favorites, just due to the sheer size of it all. Large teams running about shooting at one another is awesome, though admittedly at times there is a lot of somewhat needless running around just to find the action. I was not always impressed with the spawning, but it was not terrible either.

What does all of this mean? Star Wars fans should enjoy the world built around the game, but those players who tend to look for lots of single player depth or the latest and greatest in shooting games might come away disappointed. What is here is fun, but it comes in fairly thin slices, with a questionable number of modes and even fewer progression hooks to keep players coming back for more. It is a good game, but admittedly – I was hoping for better.