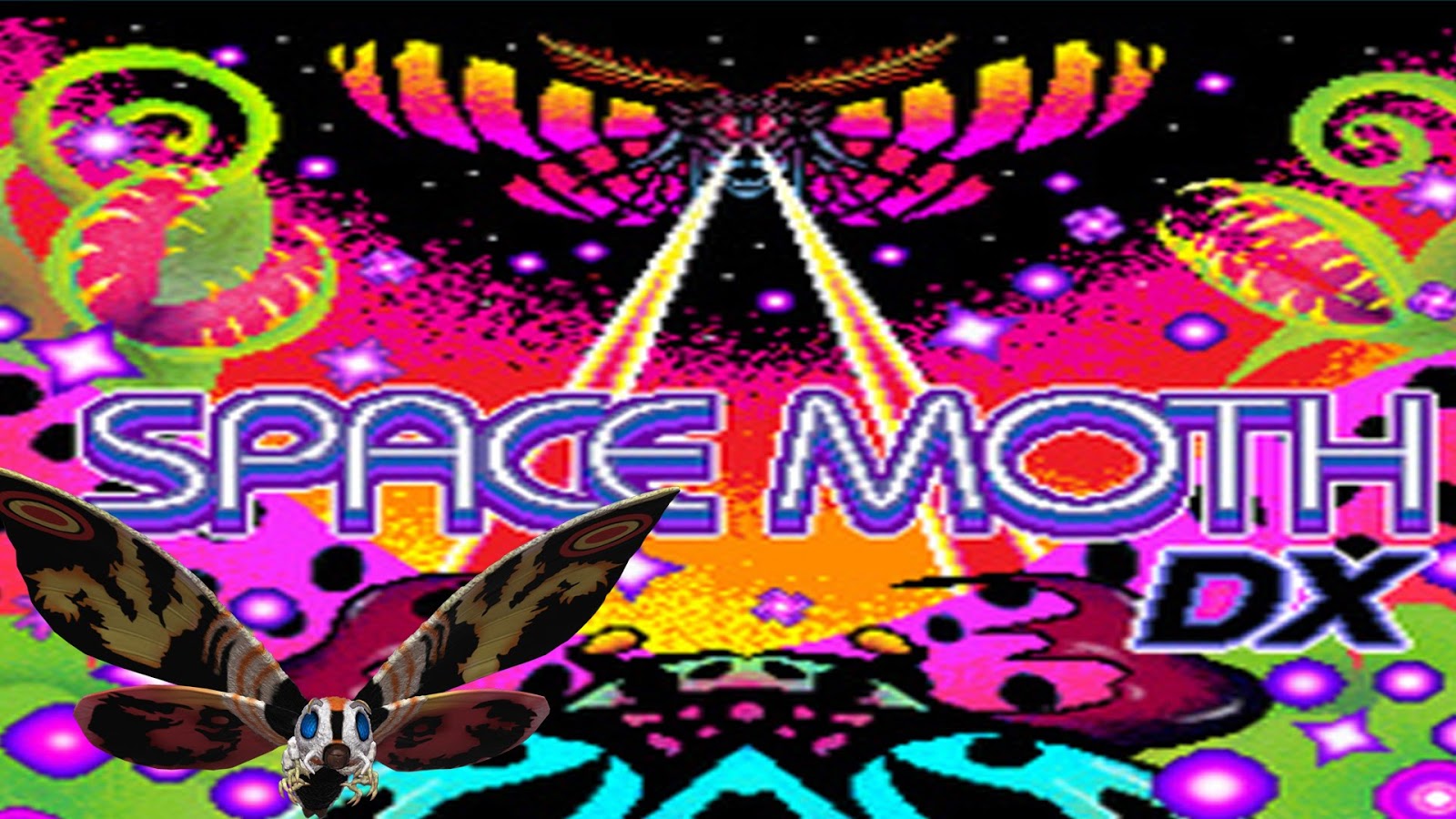 Usually, when someone hands over a game to you describing it to be balls hard and recommended for the more masochistic player, the normal reaction is to sprint in the opposite direction. Since I’ve gained a level of immunity towards them over the years by constantly playing difficult and unfair titles – Dark Souls II, Flappy Bird, Duet, DoDonPachi – I tend to naturally accept games of this nature on a whim… even though I know fully I’ll be snatching the hair out of my head in utter frustration while Phil Collins’ “I Don’t Care Anymore” plays on a loop in the background.

Despite the anger and expletives that follow after my 500th death, games with a challenging difficulty gain my respect. When I quit from the game and jerk my brain back to “rational” mode, I realize there was nothing inherently wrong with the game; the fault lied in my inability to understand that I was rubbing it the wrong way, akin to petting a cat on its belly. Have you ever tried to do that? As someone who once did that and emerged from the aftermath that followed as though slashed all over the body by the machete of  Jason Voorhees, I do not advise it. Nor do I advise playing Space Moth DX – for it will tear your soul apart!

On a good day when I’m not simmering like a kettle pot, Space Moth DX is a dream come true. A vertically scrolling bullet-hell shooter, the game puts you in the, er, wings of a moth. Which shoots lazers. And before you start chastising me for my bizarre dreams, no I never dreamt of a lazer-shooting moth – though I must admit I did once had a dream where I was shooting lazers from a certain area that I cannot spell out due to the relatively family-friendly nature of the website. 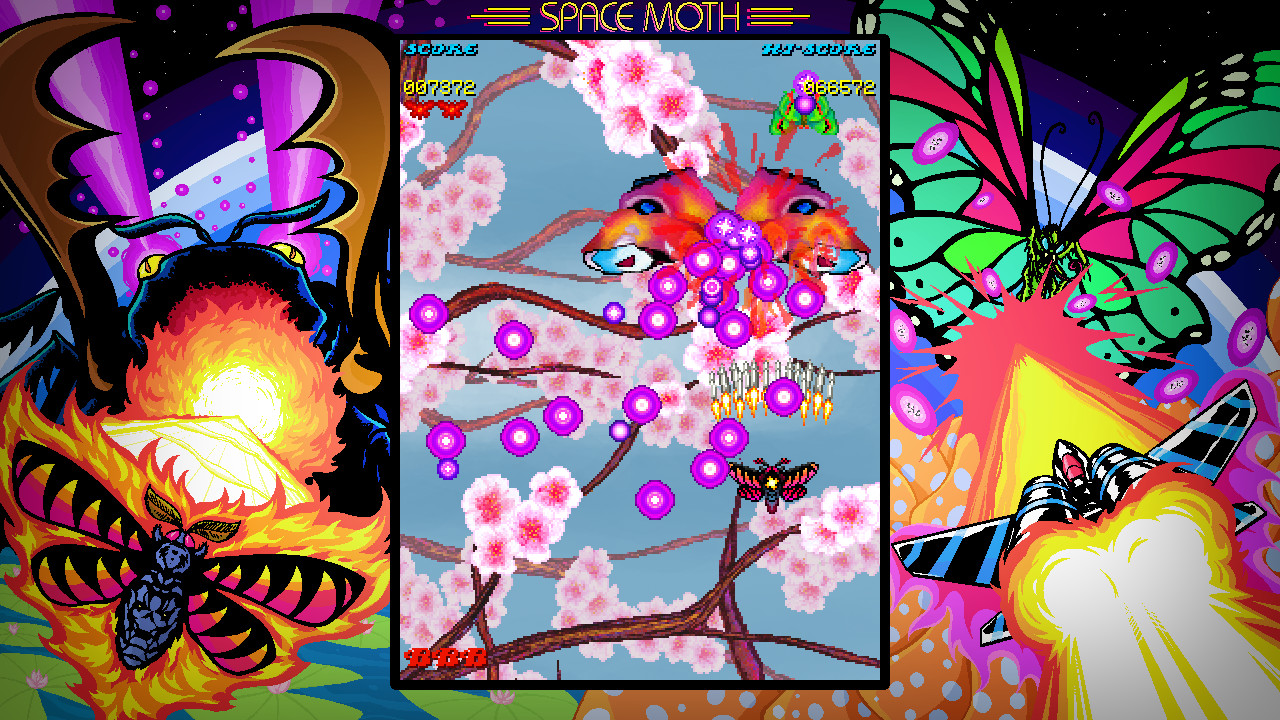 No, it’s the production of Space Moth DX that made me especially happy. Borrowing clear inspirations from bullet-hell shooters of the old – namely, DoDonPachi and the excellent Genesis shooter, Bio-Hazard Battle -, everything is covered from proboscis-to-abdomen in glorious 80’s aesthetic.  The music is reminiscent of the New Wave scene, the graphics employ the same color palette that is so typical of 80’s design and, this is my favorite part, the game even allows you to set the percentage of scanlines visible on-screen. As a graphic designer who regularly does neon-drenched posters peppered with scanlines, I approve of this nifty little feature. While I admit it only makes the game unplayable, with the scanlines being vertical instead of horizontal as they should be, it’s the thought that counts. Oh, and most enemies turn neon when you shoot them enough. Excuse me while I go change my underpants.

It’s too bad, then, Space Moth DX is too brutal and cruel to make it even remotely playable, much less enjoyable. Bullet-hell shooters are known for their notorious difficulty but I’ve never once encountered a danmaku that, despite all the advantages provided to the player, still proved to be a maddening experience. Most shooters of the ilk make the entire ship (or whatever the protagonist is supposed to be) a giant hitbox, vulnerable to enemy fire from every which angle conceivable. Space Moth DX reduces the size of the hitbox to a few pixels located at the middle of the moth – the thorax, if you will. This effectively renders the moth semi-immune to enemy projectiles. But even despite this, the game remains balls hard as ever. Another palliative feature it offers is the option of auto-grenades. What they do is act as ersatz shields to the ship, automatically blasting off and taking nearly all the on-screen enemies with it when you’re hit. However, you only get three of them and if you’re not careful, you will run out of them quicker than you can say blueberry pie. 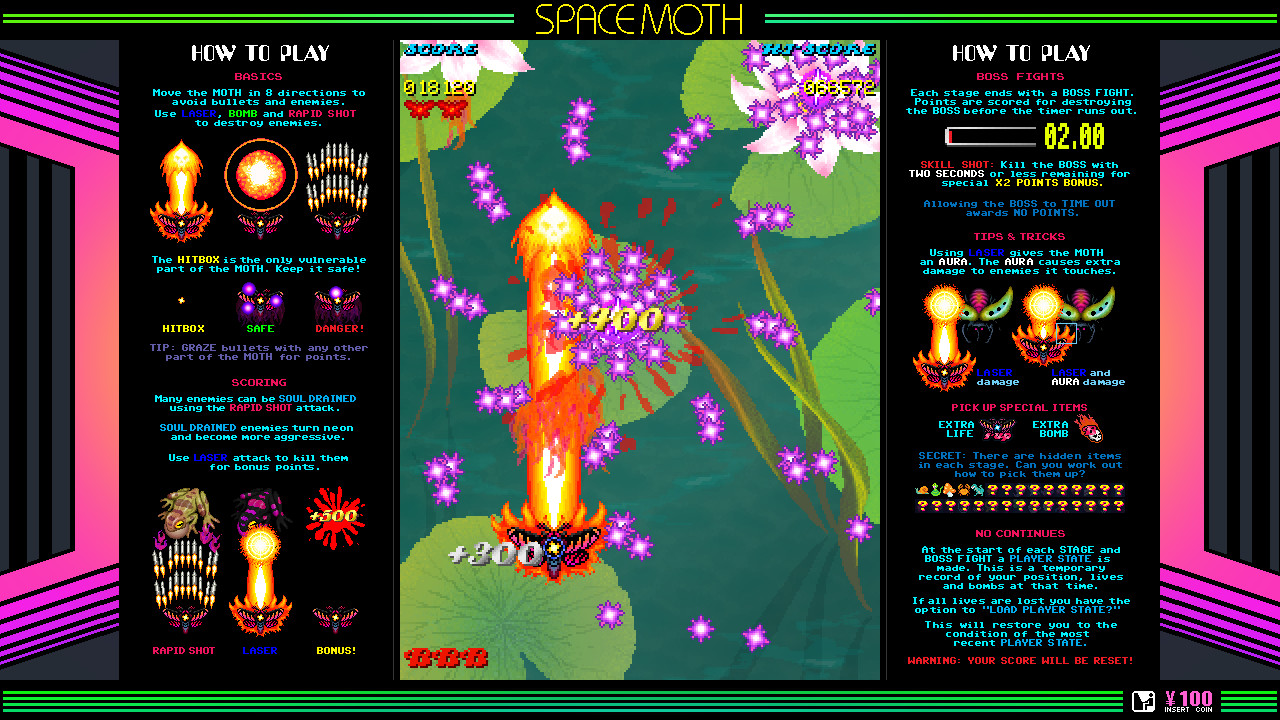 Not unsurprisingly, the enemies in Space Moth DX  are based on entomological creatures: bugs, beetles, dragonflies, moths et al. What it doesn’t do, however, is justify the reasoning of using insects. The developers could have very well gone with spaceships, and while I don’t mind the entomological spin on the genre, there’s virtually no story to tie everything together, so I’ll just label off the use of insects as an interesting gimmick.

The problem with Space Moth DX is that it is impressive on a technical level and not much else. The difficulty is maddening, and while I do enjoy a good challenge every now and then, it’s hardly a rewarding experience when you die for the umpteenth time and still haven’t progressed beyond the third level boss. I kid you not, the third boss you encounter is beyond unfair – it give a whole new meaning to the word cruel and every connotation that goes with it. The game gives you the option to select arcade mode over the masochistic DX mode, but basically this mode removes one thing: enemies don’t explode in a barrage of spreading shots when they die. This actually made the air a little more breathable but even so, I couldn’t get past the third level boss. 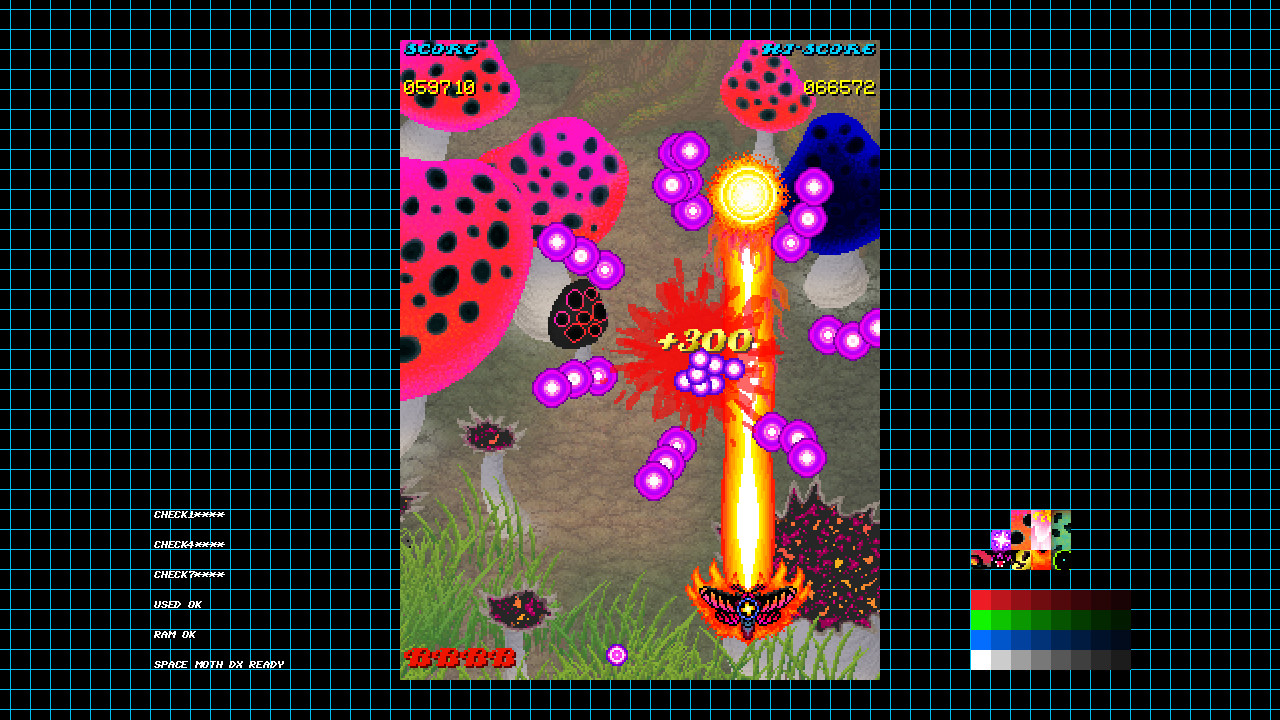 I said the game is impressive on a technical level, and by that I mean the sprites are simply some of the best I’ve seen in recent years. 1CC Games (the developer) say they painstakingly designed the pixel art from scratch, and it shows. The eponymous moth and the enemies, and indeed everything that showed up on-screen in the three levels that I played over and over again, are superbly done with fantastic animations.
In conclusion,

Space Moth DX won me over by its production. I love the 80’s aesthetic and the superb implementation of pixel art. The unrelenting difficulty and lack of narrative, however, turned me off. Now comes the part where I concisely sum up my judgement on the game. Here I’ll just let Phil Collins speak for me: “I got better things to do with my time / I don’t care anymore / do you hear? I don’t care anymore!”