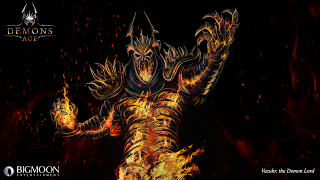 Demons Age is a modern throwback to classic RPG games like Baldur’s Gate and The Temple of Elemental Evil. Set in Moragon, Bigmoon Entertainment’s latest offering throws you into a chaotic world full of elves, dwarves, and monsters galore. The dark, high fantasy atmosphere is married to traditional Dungeons & Dragons archetypes, but with Bigmoons own spin on it. The turn-based RPG is one part tactical, three-parts fantasy and full of challenging fights, interesting characters, and a very, very brown world. Though Demons Age is currently in Early Access on the PC, Bigmoon Entertainment is plugging along with new updates, and an eventual console release; until full release though, you can enjoy the dark and mysterious northern regions of the Abidon Sea on the Moragon peninsula.

While the overarching story surrounding Demons Age is pretty typical fantasy fare (impoverished/amateur/immature fledgling grows into superhero that saves the world), the start of your adventure in Moragon is a wee bit different than your atypical RPG offerings. It starts with an opening salvo of typical “big bad baddie is trying to explode all the things” but then it gets into differing territory; you choose your character from a pile of convicts; you can choose your class from male/female versions of dwarves, humans,or elves, each with a tiny bit of backstory and then it is back to relatively common ground for fantasy games. There is a shipwreck, you are the lone survivor, scavenge some gear from the wreckage, kill a couple monsters in the tutorial and you are on your way to being a fine adventurer.

Since this is an early access build it is pretty common for there to be errors throughout the game, from period crashing (only happened two or three times) to the plethora of grammatical errors, it can be a bit rough.  One thing that surprised me was the voice acting. Not only was it present in the EA build, but it was pretty darn good too. Sad to say but most smaller studios tend to have some pretty crappy voice acting in their games, yet Bigroom had some incredible talent. That said … the regular audio effects are a bit lacking at the moment. The music is nice (and there are a few tracks that are pretty memorable), but there seems to be a significant lack of ambient audio, and that can be a bit odd at times. Sewers should echo, coastlands should, well, sound like being on a coast; its not bad, but I would personally like to see a bit more attention paid to the aural ambiance.

Combat is fun and being the long-standing D&D fan that I am, I am absolutely okay with the dice-rolling mechanic. Some people will be irritated with the idea that your toon can miss the target that is right next to you, but that is a part of the fun of dice-based mechanics. It reminds me of one of the most memorable fights that I had in D&D was where my level 7 Ranger managed to decapitate himself due to some critical failure rolls; it sucked at the time, but holy smokes is it funny to think about after the fact. So the idea of (behind the scenes) dice-based combat is exciting to me, though I doubt you will be able to critically fail and cut your own brain off, but hey, the combat brought up that old memory, so that’s not a bad thing. 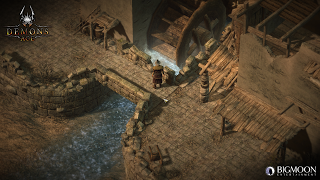 Combat while fun, is not quite all that challenging primarily due to the way I built my followers (who, by the way, will develop relationships with you). My tanks/melee units tended to be quite powerful and while I lined them up on the hex grid to prevent the enemies from going after my squishies (my ranger and mage), and before I could lay waste with my mage … the tank/melee units would smoke the bad guys. Depending on the fight, the melee units would tear down the baddies before my mage or ranger could even take a turn. Sort of sad really, and indicative of some balance issues. I would like to see some nerfing of melee units / weapon bonuses to help force a more tactical aspect.

Demons Age is without a doubt a modern throwback to classic RPG games. Where Torment: Tides of Numenera or Pillars of Eternity use classic systems as a foundation and make that system their own, morphing them into nearly unidentifiable cores (in all the best ways), Demons Age takes the classic D&D-style core and lets it lie, instead focusing on the use of lore (and there is a ton of lore throughout Moragon) and the fun of familiarity, Demons Age is more about honoring the system, not changing it. The fact that Bigroom has embraced the model and are not trying to redefine a genre is a massive selling point; the core genre concept that Demons Age follows was perfected by Baldur’s Gate II and they recognize that and do not attempt to change it.

Though in very Early Access, Demons Age is a solid attempt at honoring core D&D systems while offering a lore-rich turn-based RPG adventure. With time I am hoping that Bigroom evens out combat, adds more voice acting, spends some time on ambient audio, and fleshes out some of the character relationships, and even with the flaws, the current build is an enjoyable experience.