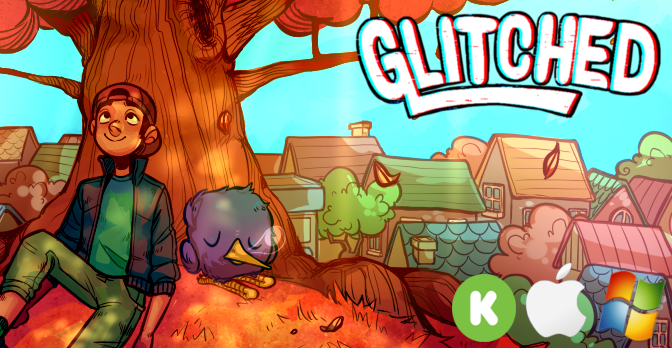 Glitched is a rather interesting looking indie RPG from En House Studios. Upon first taking a look at the demo, the first thing that came to my attention is that it’s also available for Mac, which is nice because that means I don’t have to keep booting in Windows mode to play games. Glitched feels a lot like Earthbound with a hint of Undertale thrown in. It has that nostalgic feeling to it while still offering something new.

In Glitched, you play as, well, you, the player. You follow the tale of Gus, who may or may not be the hero this game deserves. Gus becomes aware of your existence after some unfortunate circumstances, and now you get to follow and help him through his ordeals to save his best fiend Conrad. Or at least, this is what I’ve gathered from the demo. Exploration and combat flow smoothly together, and there are many options available to you, both in battle and out.

Much in the traditional RPG exploration, you can talk to people, explore villages, examine rocks, trees, stumps, heck, pretty much everything has its own flavor text, which is a level of attention to detail that feels really nice to see. You even get items for certain benchmarks when examining objects. Combat is handled in a turn-based format, with a very Earthbound feeling, not that that’s a bad thing. Apart from the standard attacks, skills are on a cooldown basis, instead of an MP or mana basis, where skills become useable again after a few turns. During battle you have the option to interact with enemies, potentially allowing you to end a fight without beating your opponent. Additionally, after battle you are given an option to either spare or kill your opponent, which is where the Undertale tones come from. 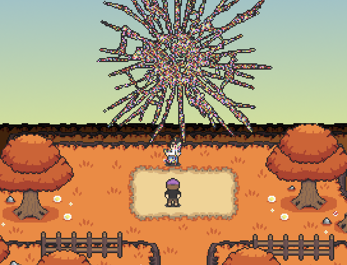 So where is the unique draw? What separates Glitched from other games, or even Earthbound and Undertale? That would be the “essence system”. As you make choices, Gus’ in-game personality starts to reflect said choices, making him stubborn, or passive, or even violent during interactions. During my first play of the demo, I had a nice conversation with one of the characters, but during a subsequent run, Gus automatically started a fight because of the personality difference. This alone provides a wonderful spread of replayability options, not to even mention the wide variety of different approaches you can take to reach your desired goal, either by force or conversation or something else entirely. There are plenty of hidden secrets and branching pathways, and I am really looking forward to see how En House Studios continues to provide their path choices.

The sheer amount of options that alter not only your story route, but also your personality is incredibly amazing. The amount of detail that has gone in to crafting these options immediately made me look forward to future replays, just to see what I could do differently, and what changes that would bring to the world. While the main focus seems to be the breakdown of the fourth wall, Glitched doesn’t rely only on that to provide a story, also opting to focus on gameplay to provide a solid experience. As is often the case in games with many choices, I occasionally found myself not wanting to choose any of the options, as what I would really say would be something entirely different. Glitched strikes a nice happy medium, giving a lot of options that would feel appropriately close to what the player would probably say themselves. 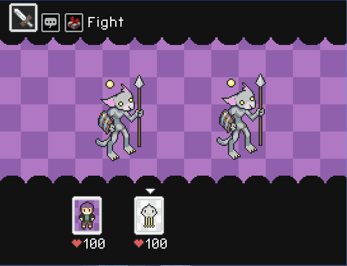 Battles in the demo can be largely avoided, and equipment was quite sparse, making it feel more visual novel-y at times, which gave rise to questions about what the core gameplay element was supposed to be between exploration or combat based gameplay. While there are plenty of options, I worry about whether En House will be able to keep up with the precedent they have given themselves, and not having the choices turn into arbitrary decisions by the end. Personally, I would love to see them implement a run function, at least in towns. New game plus options to keep track of your previous decisions and the impacts they have would also be nice to see in the future installment. I personally look forward to seeing where En House Studios plans on taking Glitched, and I hope I have the chance to review it when the full release becomes available. Please check out the website if you want to try the demo.