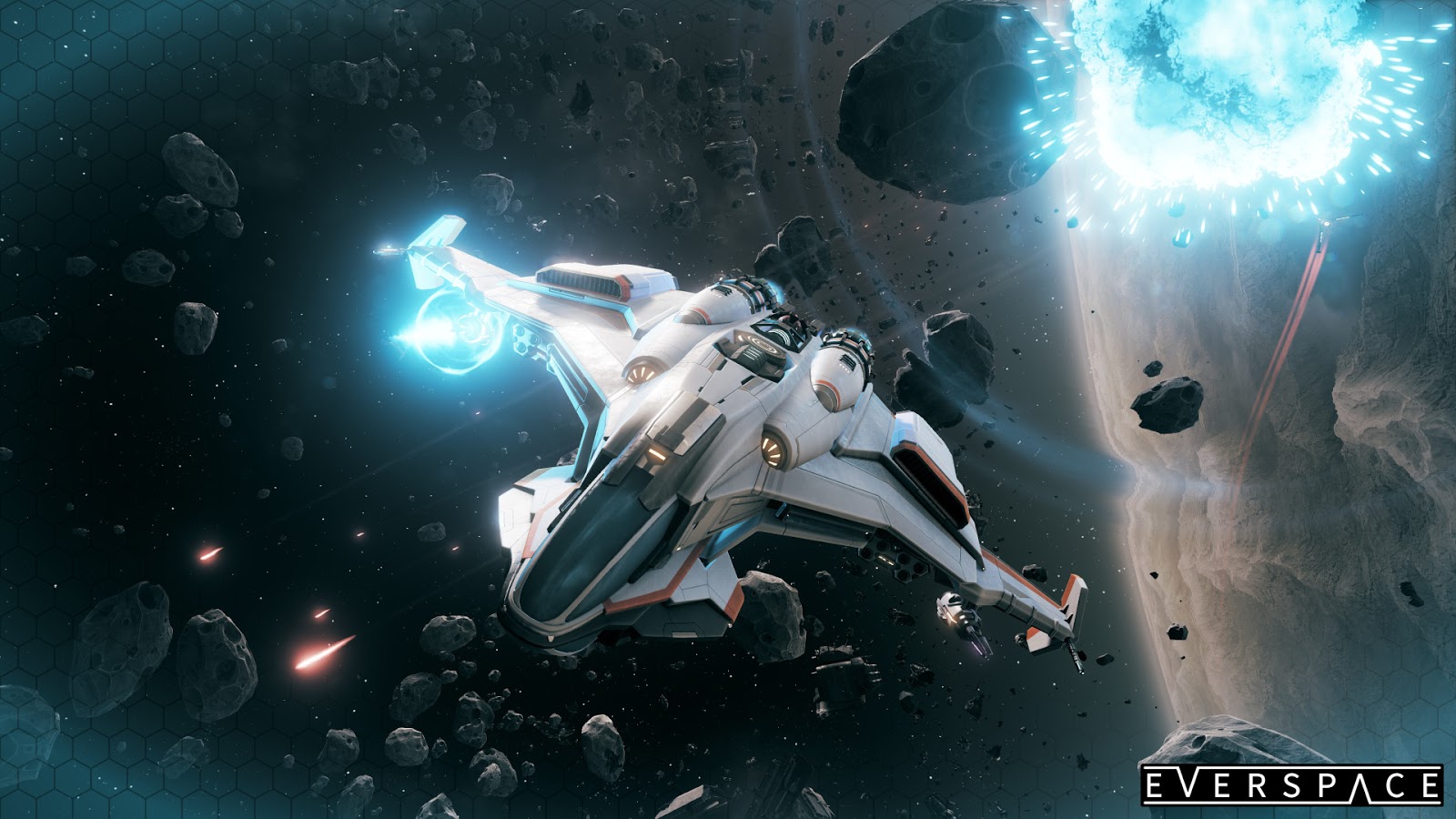 Everspace is a solid rogue-like space shooter with stunning graphics, fantastic ship-to-ship combat, and an interesting, if small universe. Many of you that have been around Chalgyr’s Game Room will know that I am a big fan of space-based games but am so very definitely NOT on the bandwagon when it comes to rogue-like games (I would rather watch Teletubbies or Barney and Friends). The surprisingly simple to pick up, difficult to master Everspace lured even I into its action-packed space-faring goodness.

To start, it is important to note that Everspace is currently in Early Access so it is possible (and likely) that the game may change. It is not uncommon for storylines, combat features, balancing, and ship upgrades to change throughout the course of the Early Access period. Fortunately the great folks behind Everspace, ROCKFISH Games, are incredibly perceptive to gamer feedback and are quite responsive with their updates (in the two short weeks Everspace has been in Early Access, ROCKFISH has released a sizeable update based on gamer input).

At time of this article’s posting, there is only one ship available, but there are a number of new ships that are scheduled to be released. Currently you are able to select what I would concider an interceptor-class ship, small, nimble, fast, and with a light-medium initial loadout (that can be upgraded). 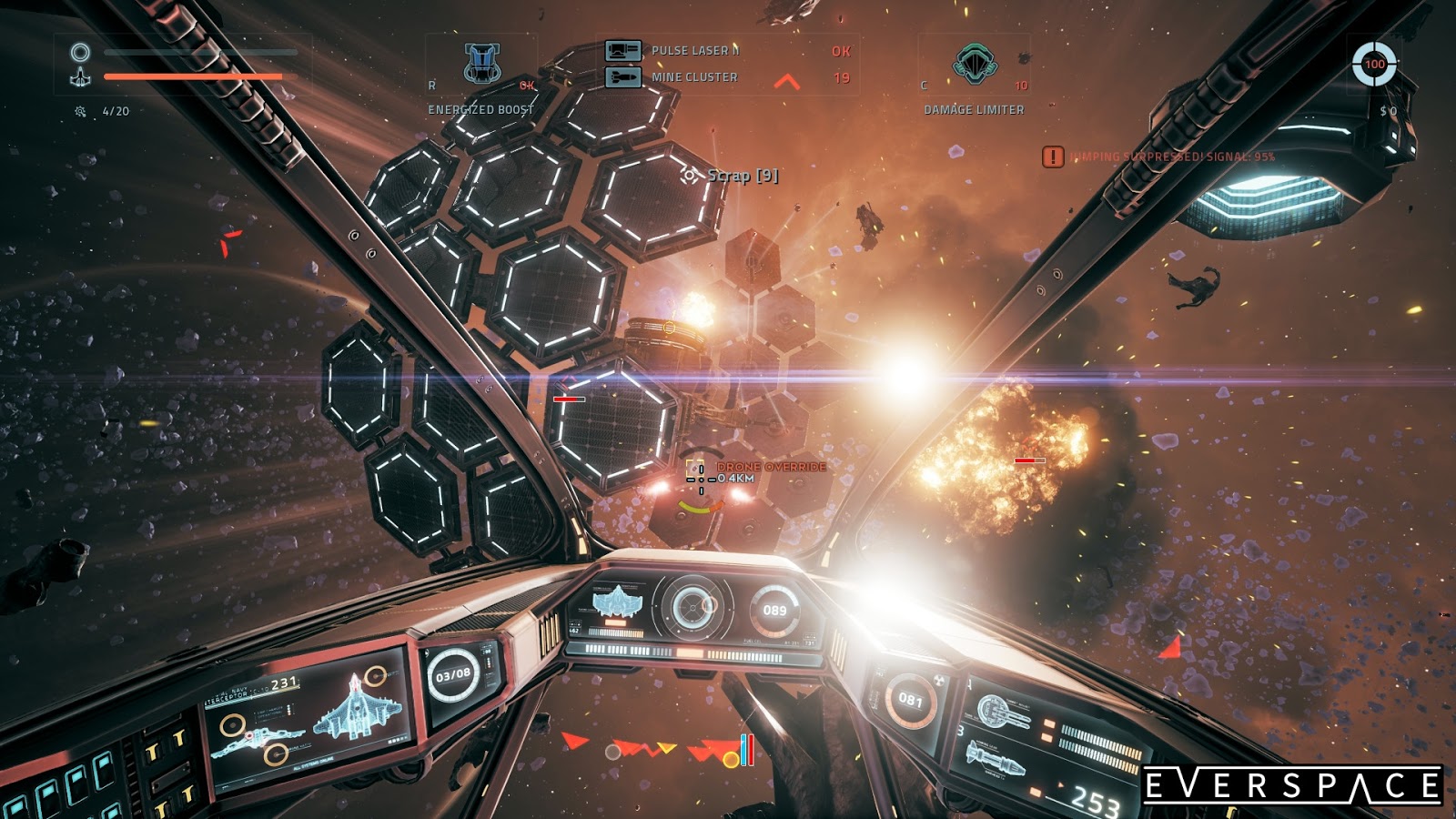 I was actually quite thrilled as Everspace immediately recognized my Xbox One controller and I was immediately thrust into the action. Quick and easy to pick up, Everspace has you jumping through various warp points (and eventually jumpgates) fighting, mining, crafting, and exploring. In true rogue-like form, health is persistent and difficult to regain (for Everspace, you regain hull integrity by picking up and spending nano bots), weapon drops are relatively rare, but there are plenty of minerals to mine throughout each of the maps. Once you gather enough resources you can hop into your ship menu where you can craft new shield generators, new missiles, upgrade existing weapons, craft scanning probes, or craft the new items that you pick up in the form of the very rare blueprint.

Amidst the mining and combat there are little extras like communication and jump inhibitor antennae that you need to clear of enemies (often an elite enemy or three) and then get EXTREMELY close to so you can initiate an automatic hacking procedure which allows you to tap into the communications network (which is effectively a free region scan, which is crucial) or to disable a jump inhibitor which is preventing you from moving on to the next region. The deeper you go into the galaxy, the more you will come across traders, service stations, and non-hostile NPCs. The NPCs, both hostile and neutral are neat in Everspace; I actually had some outlaws, who are hostile, come in and save me from a hostile 3rd party, which allowed me to jump to a new region, spend nano bots to heal, and move on. These 3-way dogfights are actually pretty common, and a neat site to behold … that is until a fleet of capital ships is called in as reinforcements. Unless you spot them quick and are in an asteroid field when they warp in (which is an AWESOME sight to see), you might as well resign yourself to an explode-y death.

While content might be a bit shallow (though the first tier of upgrading is fully available), the Early Access build of Everspace is a prime example of Early Access done right. ROCKFISH released a solid, working sample of their gorgeous rogue-like space combat game and are regularly updating it with promised features and tweaking existing functions based on community feedback.

Well done, ROCKFISH, well done; everyone should do themselves a favor and go pick up Everspace right now from the Steam store.