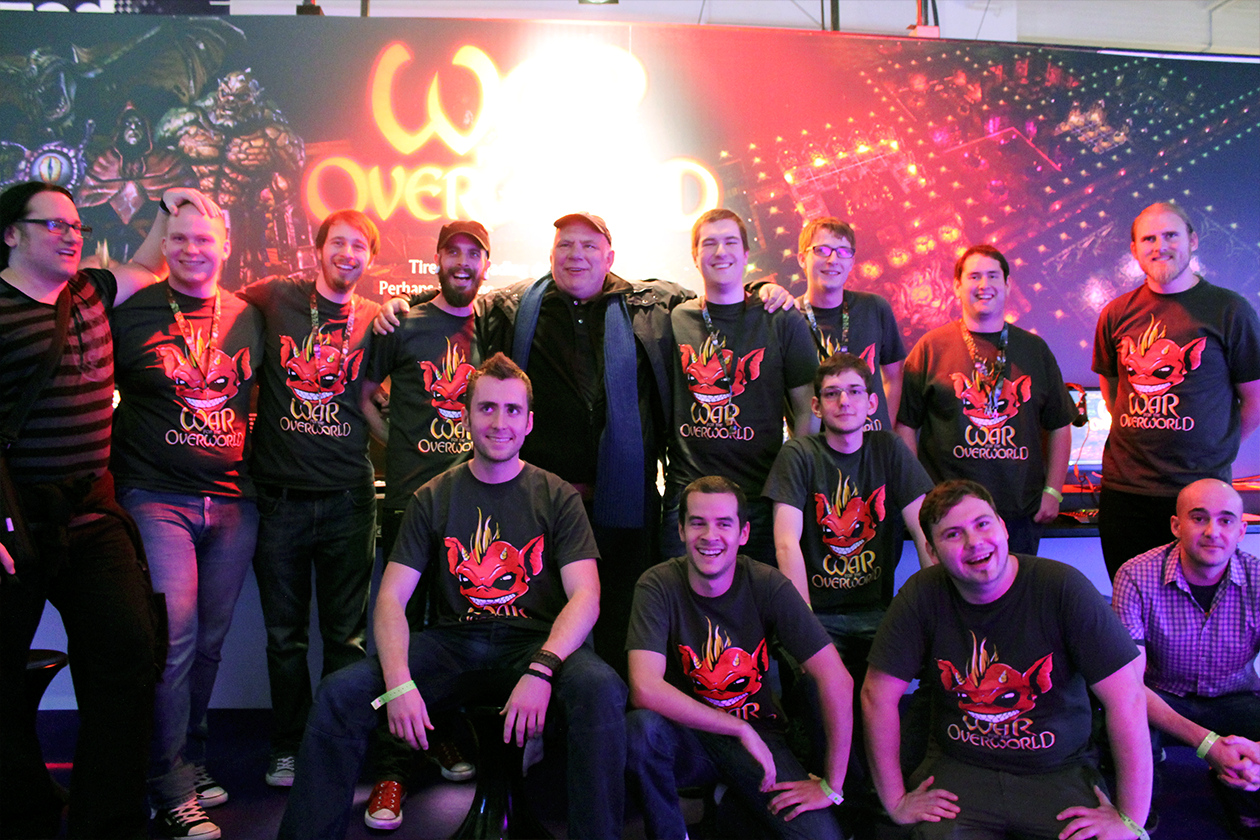 The WFTO Team & Volunteers with Richard Ridings at EGX 2013

We recently had the chance to sit down to both War for the Overworld and the new Survival Mode content known as the Crucible. Curious on how things came to be we reached out to Brightrock Games to see what they had to say about their adventure and this is what the Managing Director Josh Bishop had to say!

1- Thanks you for taking the time to answer our questions. Starting at the beginning, what made you set out to develop War for the Overworld?

There were a couple of things that set us on the path to developing WFTO, but if I had to narrow it down I’d say that for over a decade the industry hadn’t delivered a great Dungeon Management Game. There was a huge hole in the market and an eager fanbase waiting for something to come along and fill that gap.

Although there were a few games out there which had tried to fill the void, none of them seemed to have captured the core gameplay that made that type of game so much fun. As huge fans of the genre and games such as Dungeon Keeper and Evil Genius we were tired of waiting. We decided it was time to do something ourselves so we came together on a fan forum called Keeper Klan and the rest is history. 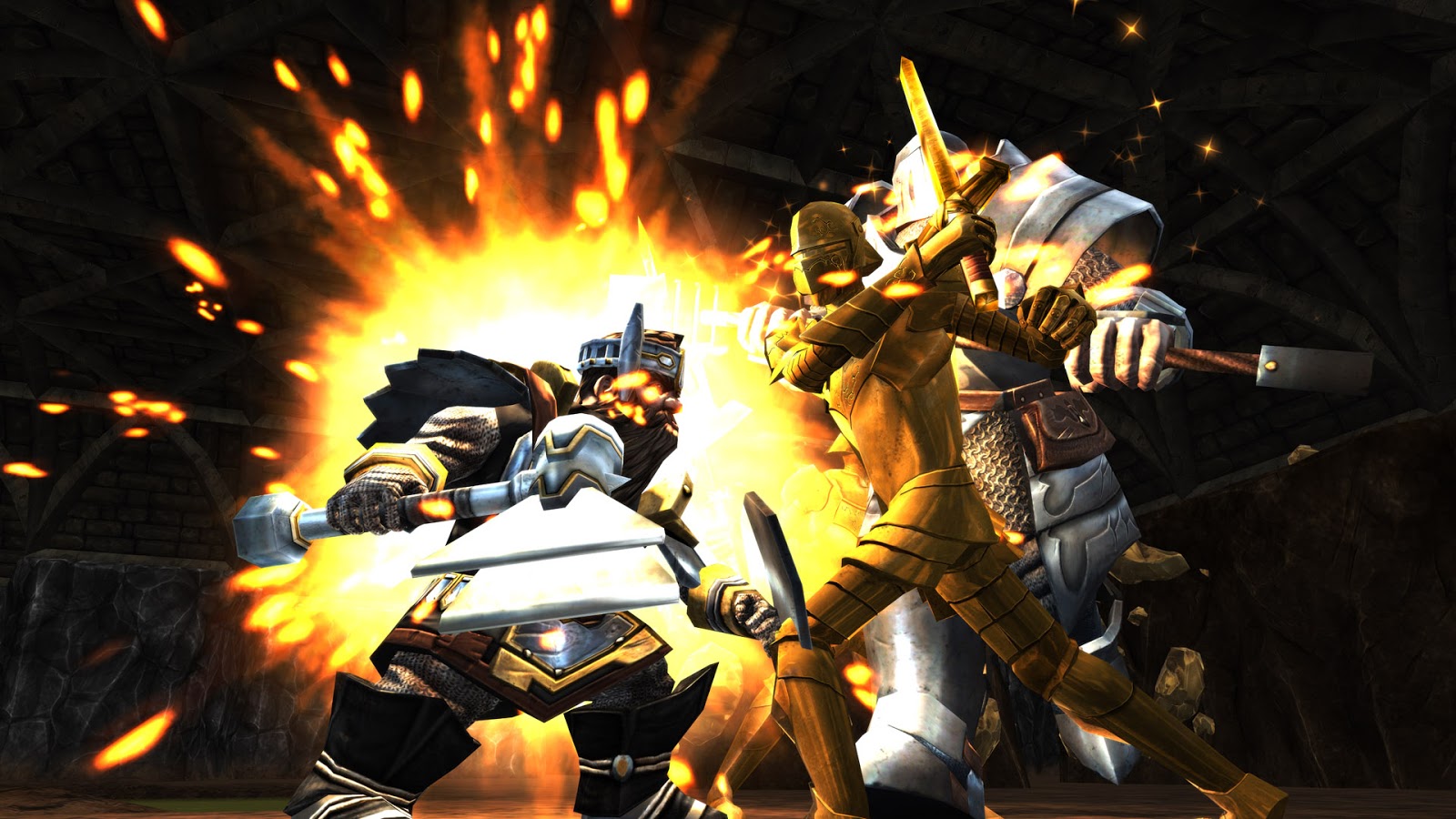 2- With the direction of the core game / Heart of Gold what prompted the move to a pure Tower Defense style for the Crucible?

The very first iteration of what became the Crucible was released in Patch 0.4 under the name “Stumpy’s challenge”, a reference to our Blood Imp mascot. It was a simple mode primarily developed to refine the capabilities of our custom scripting engine. We were surprised when the mode became very popular within the community.

Later that year we took the game to the Eurogamer Expo 2013 (now called EGX) in London and we decided to issue a challenge: anyone who could beat our high score would win a T-shirt. It was tough, we were asking people with little to no experience of the game to try and beat us at our own game. Amazingly everyone loved it! We even had people coming back every day of the four day event just to try, and we had to cycle people off our four PCs lest they hog them for hours.

I remember in particular this one guy came by each day and on the last day at the final hour he beat the score and set an all-time record! We were all yelling and pointing at the screen to get him those last few points with some choice lightning casts! With that energy circulating about the mode we knew we were onto a winner.

It’s been a long road but we always intended to return to the mode, and we’re glad to have built something that feels as tight as Crucible does. But if you feel like playing a bit of history we even left the old prototype in the Extras menu! 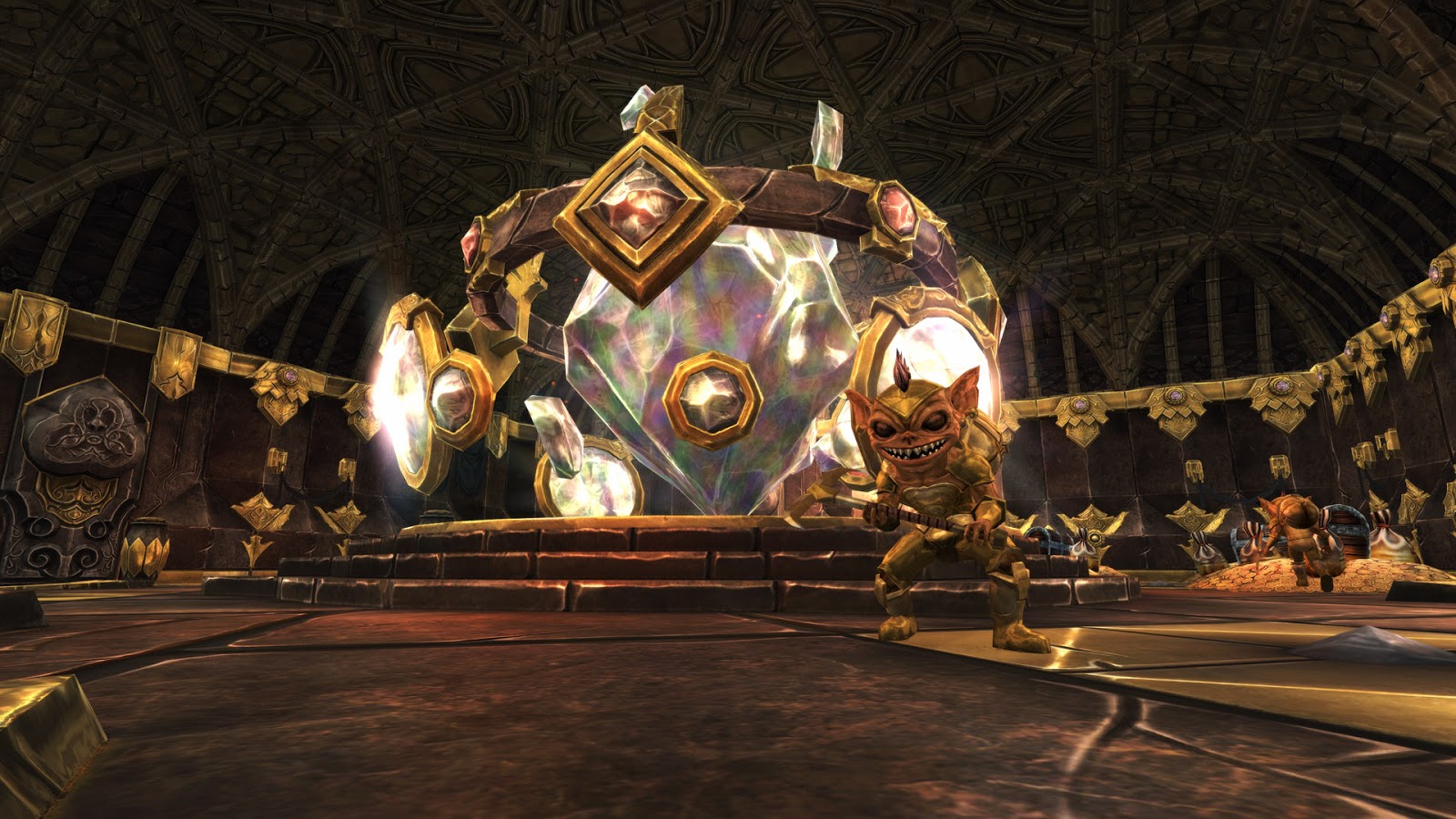 3- Between the original’s development, Kickstarter, and the Crucible, is there anything you wish that you would have done differently knowing what you know now?

Definitely, that’s the thing about game development you always feel like you could have done more when you get to the end. But WFTO has this more than other games. It was a behemoth undertaking at the time and we didn’t really appreciate the complexity of what we were setting out to do – it was a risky endeavour for a small team with everyone spread across the world.

There was a lot on the line with WFTO and we had so little in the way of resources and time, especially after some early development disasters. There was a great pressure with the ever-present spectre of financial bankruptcy pressing down on us, even without the overhead of an office.

In a way early development was a lot like a game jam – we had to experiment a lot, quickly correct mistakes and hack a lot of stuff together to get it to work in time. We incurred a lot of technical debt that makes some parts of WFTO tricky to edit, even to this day.

If we could do it all again with the resources, knowledge and experience we have now and all the team in the same building, WFTO would be a totally different beast. There’s so much we’d love to tidy up from the original development – in particular developing a more cohesive art direction, and injecting more personality into the dungeon and its denizens. We’d also probably shift to a slightly slower-paced, more simulation-focussed game design.

But with all that said we’re proud of what we achieved and we’re pleased with how WFTO turned out and how it continues to evolve. More than anything we’re proud we’ve delivered a game that so many fans of this lost genre are satisfied with. That’s been our goal all along: to create a game for the fans, by the fans. 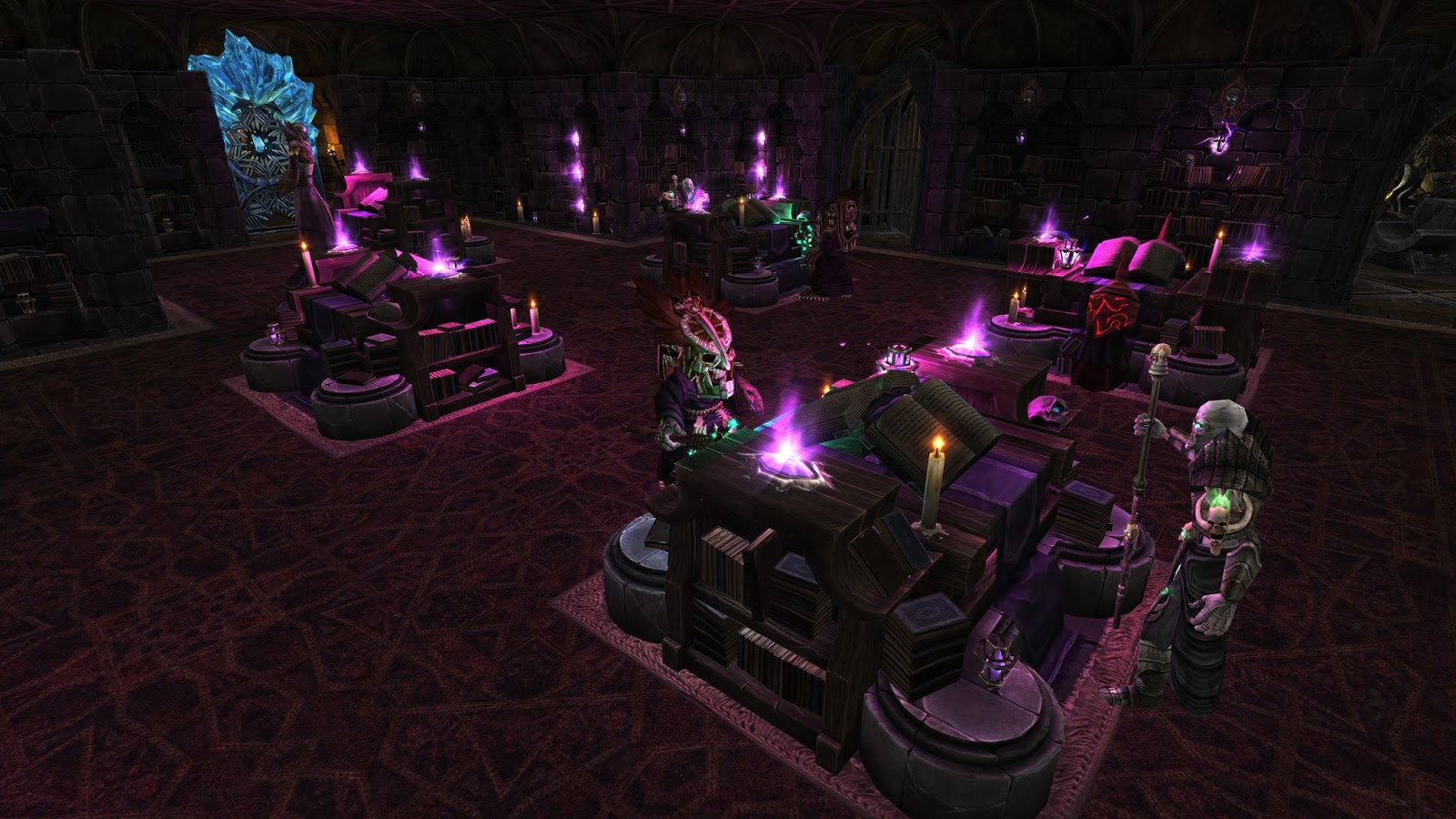 4- With both sets of content now behind you, what are your plans for the future? Can we expect new content and games modes or did you think of trying your hands at something new?

There’s so much going on it’s difficult to know where to begin. In November we made a statement on our plans for the future and the endgame for WFTO, but things have changed a little since then.

Originally we were planning to release one more major update early this year with a whole suite of changes – in particular a complete AI overhaul for Skirmish that would release alongside WFTO’s second paid expansion (new campaign, new mechanics and much more). But since the incredible success of Crucible, plans have changed. We’re now expanding the scope of the original plan with extra content throughout the year.

I can’t speak on what exactly is coming beyond what’s already announced, but the expansion will be releasing a little further down the line than originally planned. In its place we’ll be releasing a whole new and oft-requested game mode in the first half of this year. Beyond that there’s even more exciting stuff in the pipeline that I just wish I could share, but I promise as soon as we’re confident in it we’ll be sharing news.

We’re also looking beyond WFTO itself. Our next game, codenamed “Project Aftercare”, has been in pre-production for nearly a year now and it’s really shaping up to be something exciting, although full-time development is not likely to begin while we’re working on WFTO. So far we have designed a new software architecture, as well as developed the lore, art direction and overall game design. Honestly we’re really excited for it and can’t wait to start sharing details with our community. 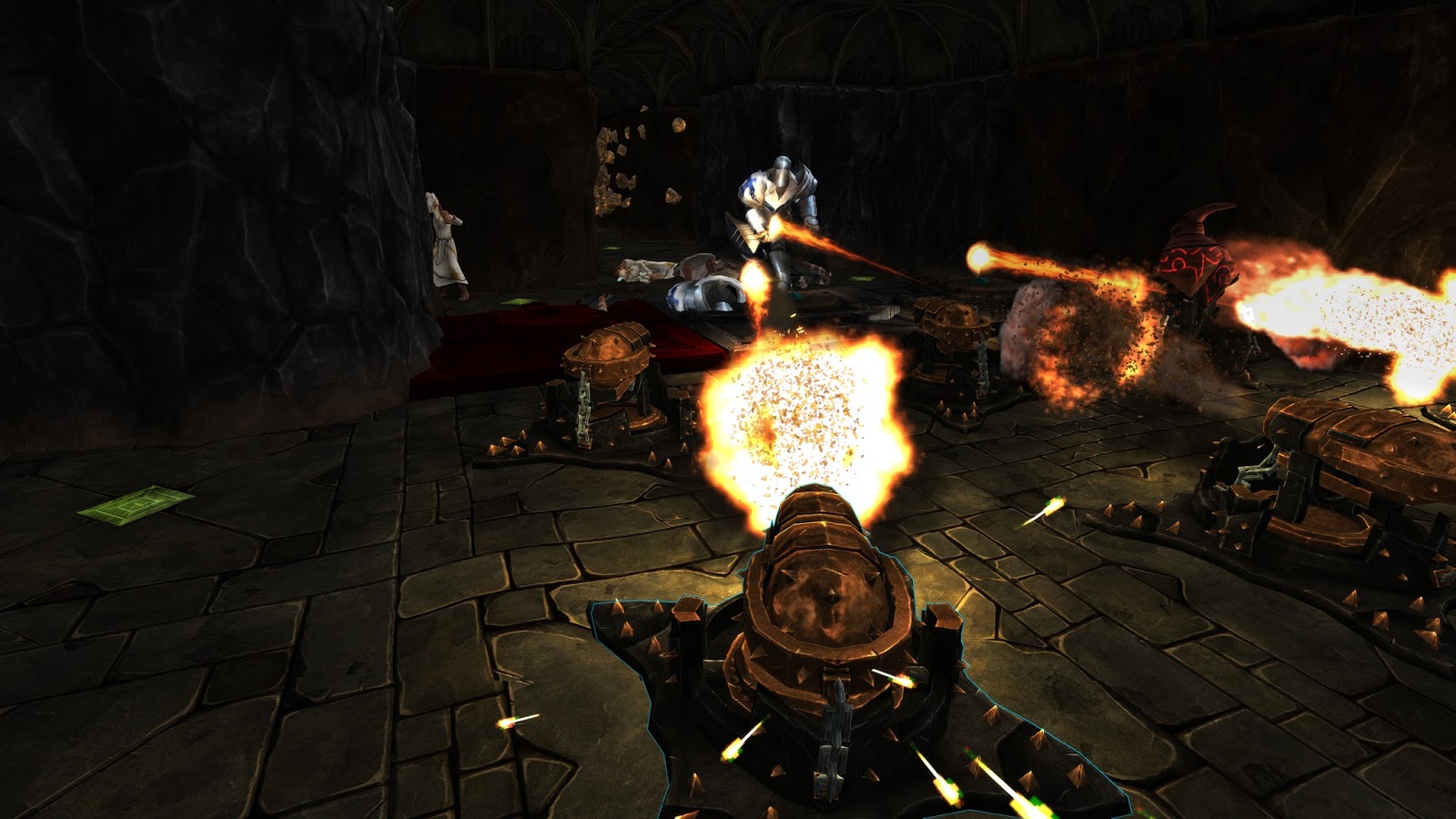 5- A little less about what you’ve done and more about what you like to do, what does the team like to do for fun? I’m pretty sure, and I hope, that the bosses are not like the overlords causing you to constantly work!

We’ve got a pretty diverse set of hobbies over here, even amongst a team of only nine people. Obviously there’s the video games, and in particular a few of us spend a lot of time with the Blizzard titles. We also host board game nights at our office a few nights a month for all members of the Brighton indie game community.

Our Community Manager runs a fortnightly D&D session for the team and friends – with a party of eight it gets pretty hectic but it’s always great fun, though nothing ever seems to go according to plan for us. You would have thought that a bunch of game developers would be good at something like this, but after our Art Director eviscerated my character, it seems we evidently are not. He says the axe slipped – I’m not so sure.

Recently some of the team have taken up weekly badminton sessions too – who says gamers can’t do sports? 😉 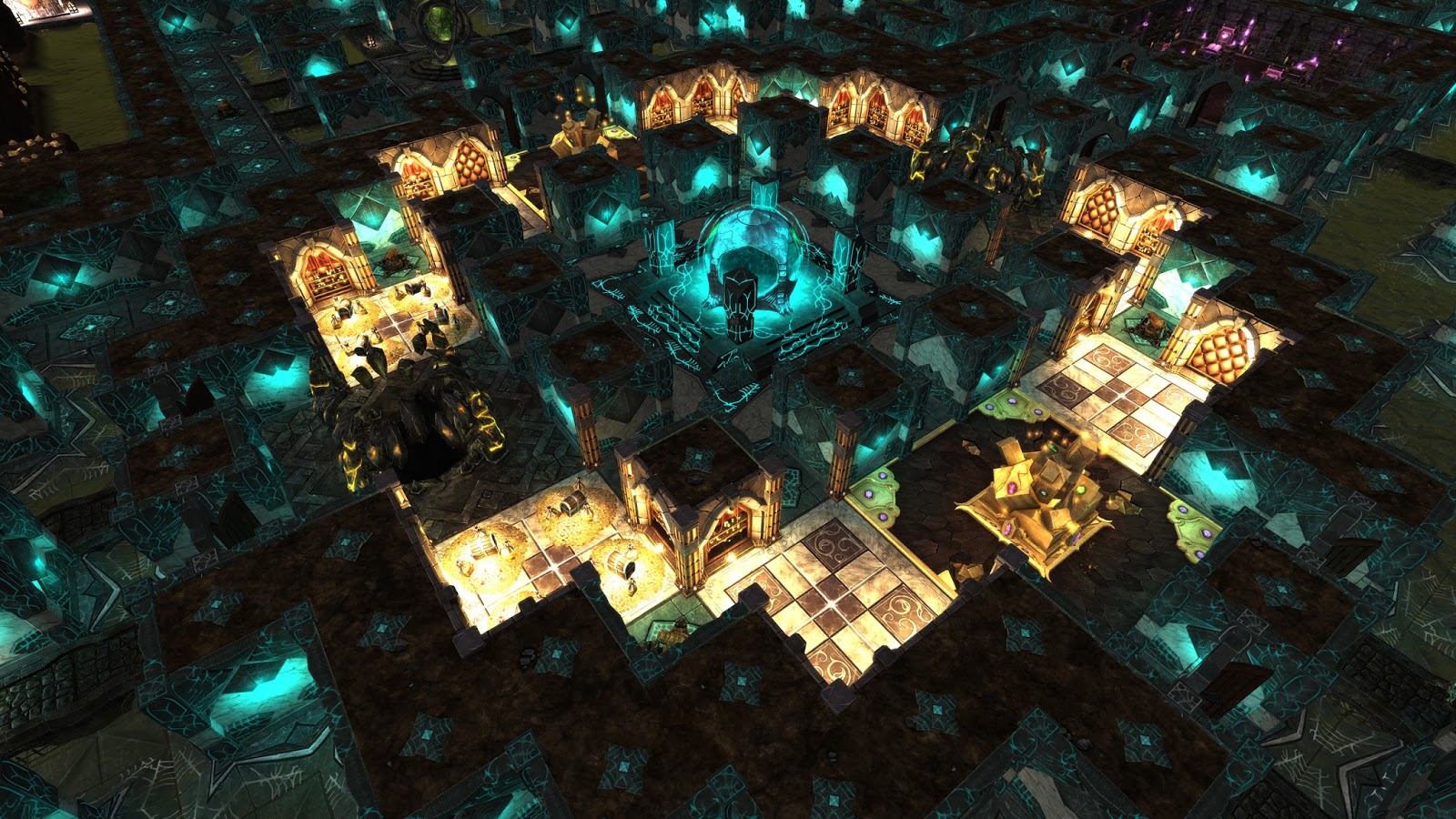 6- Finally, because I need to know, how much fun was it writing the dialog for the narrator? More than that, how long did it take you to convince the man behind the voice to do it?

Working with Richard Ridings is an absolute pleasure – he’s as much a personality in real life as he is when he steps into the disembodied narrator’s shoes (but a bit less evil). In fact he’s one of the nicest chaps we’ve met on our long journey with WFTO. When he walks into a room you take notice, and his voice is even more incredible in person. In a way it’s also very surreal – for many of us on the team Richard’s voice is counted amongst our fondest childhood memories. So you could say it really is a dream come true.

Richard was on board with the project from the early days, and we can’t thank him enough – his voice has really taken the game to the next level and brought back that special Dungeon Keeper feeling. He even joined us at EGX 2013 to check out the game for himself!

From our writer:
Scripting lines for Richard’s character is as much fun as you can imagine. Writing comedy is liberating at the best of times – even more so when you’re dealing with someone so despicably malevolent. I’m sure Richard feels just as liberated when he steps into the booth to bellow out the lines!