Huh… so that’s how Matt Damon felt in the Martian. Having crash landed on the Red Planet it won’t take long to get moving because the Oxygen levels and the Battery life of your suit won’t last forever. Don’t worry though, there’s no potato farming!

Lacuna Passage is an Early Access Simulation of what it would be like to walk on Mars after your pod face planted into it’s surface. Currently there is only a Sandbox Mode in place as the Story Mode is not currently available. The Sandbox mode however is more than enough to get a sense of the direction of a final product and even if there are some rough spots with the controls, the whole package looks like it’s in a good shape.

Waking up and seeing the oxygen and battery gauges to the left and the right of your helmet for the first time a small sense of urgency pops up as you know that time is not with you. Given instructions to on how to turn on your scanners in order to find, fix, and turn on the nearest habitat, you start hoofing it towards your destination. What are you supposed to do? There’s a ton of stuff lying around everywhere! Following your given instructions you head into the offline habitat to see what can be done. Oh, don’t forget, you’re running out of air. 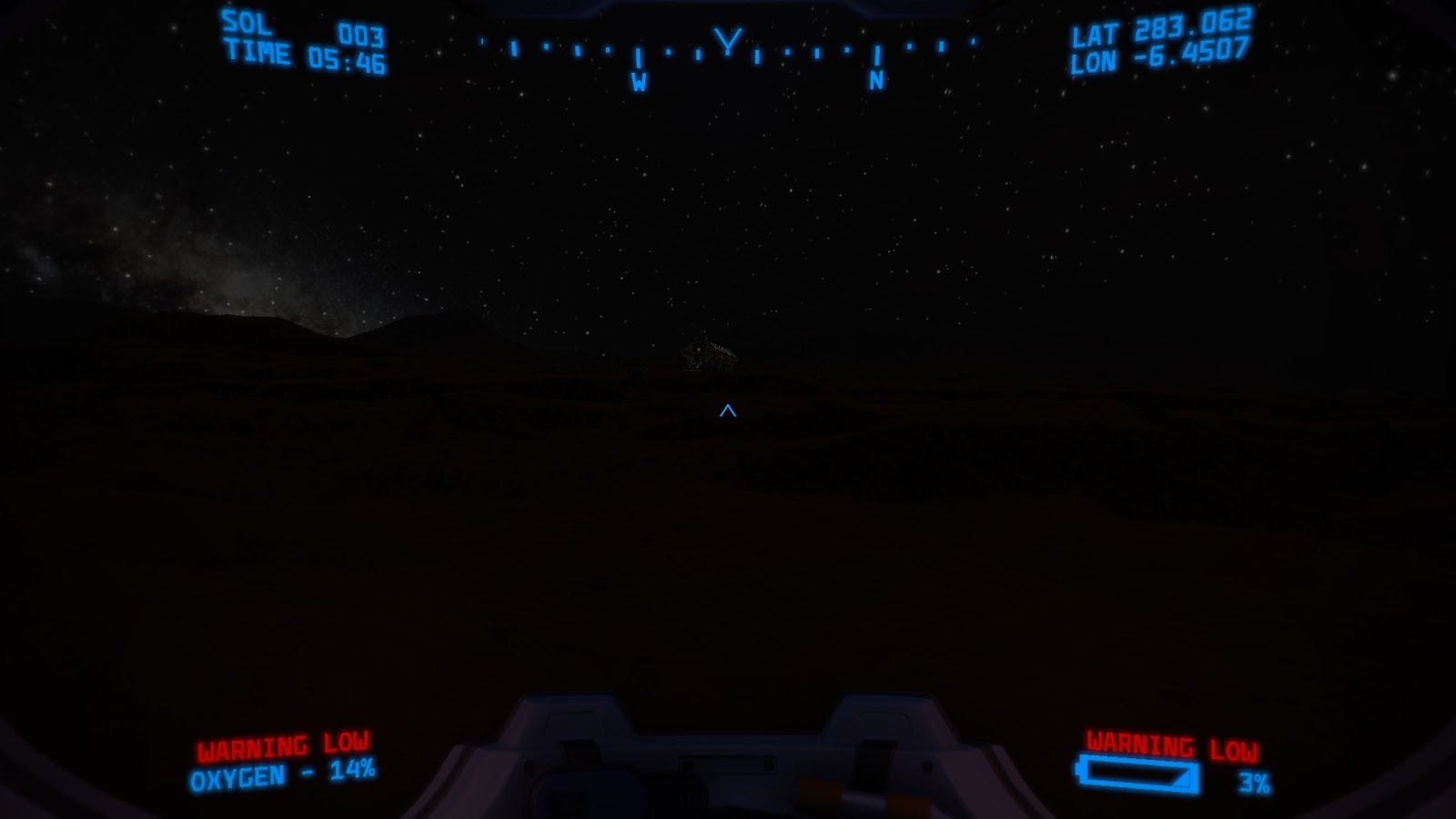 There’s going to be a fair amount of reading involved in order to figure out exactly what you’re supposed to do or none at all if things simply click. Putting the habitat back together is your first priority and ABOVE ALL ELSE, turn the systems on. I died after my first day as I didn’t realize that each station that needs to be repaired from the water pumps to the power and air filters, all need to be turned on. I repaired them but was looking for a central location on the switch without realizing that each station has their own. Whoops. I ran out of air. Apparently I’m not suited to go to Mars…

On my second try, I went back to each station, checked the diagnostics for what was damaged and it surprisingly changed. It wasn’t the same parts that needing fixing or swapping out to get the Habitats systems back online. This was good because it meant that you couldn’t just rush through your initial starting point every time. Repairing these systems is very hands on. You need to have the parts on you and you need to click out the exact parts in question. Fuses 2 and 5 need to be replaced? Air filter 3 needs to be fixed and replaced? You have to interact with these portions that are behind panels specifically. Once they are all up and running, AND you’ve turned on the power, it’s time to head into the habitat to see what can be done.

Once inside the for the moment heated safety of your Habitat, there’s not much to do. You can check your food stores, check out your resources, make new parts to fix things or sleep. You’ll need to sleep, you’ll need to eat, and you’ll need to keep track of how you eat as you’ll need the calories to burn off while outside the habitat just as much as you need your vitamins and nutrients. Eating itself is just as easy as clicking on the item in your inventory and chowing down on it. The same can be said about drinking water that unlike eating can be done outside of the habitat as your suit apparently has a hose for that. 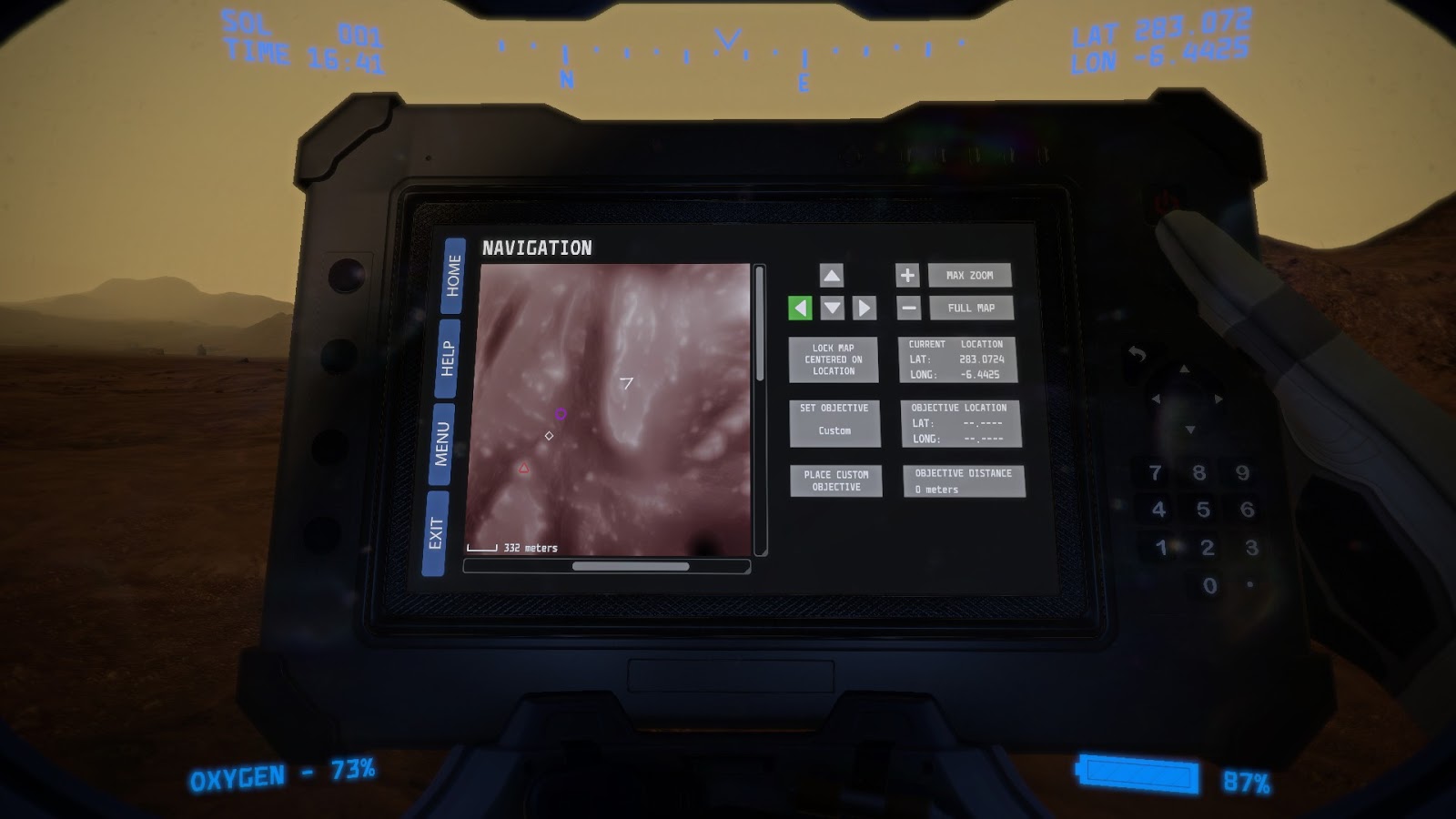 After you’ve gotten the place running and you’ve taken stock of what’s left, there are two other habitats to be found and your survival to think of. This is where things got a bit… boring. Being hands on with the habitat is great. Finding crashed supply drops or other unfortunate souls that didn’t make it back and taking their supplies is good and all but Mars is nothing but a floating ball of dust and other than a day and night cycle there’s nothing to see. Some of the views are great but there’s nothing else in the meantime. There are no sandstorms, no solar flares and you’ve got to essentially walk slowly as you can’t run forever and running depletes your air faster. There’s also no auto-walk meaning that you’ve got to hold your fingers on the direction you’re moving in.

The complaint that I have about Lacuna Passage is the manner in which you can interact with your inventory. The mouse for some reason is disabled meaning that everything has to be done with the keyboard and generally one item at a time or more keyboard manipulation. It makes things take longer than they should and there’s really no possible added value to disabling the mouse.

Being Early Access there’s plenty of time to spice up a bit on the survival aspect. The beginning is great but it dies off fast enough as it’s no longer a hands on but a boring solo walk with nothing much to look at. I do hope to see more content added such as storms, flares, falling rocks, or even creatures from underground coming up to see what is prowling around in their territory.