Accel World vs Sword Art Online: Millennium Twilight is the latest in the SAO series’ original entries. Merging both SAO and Accel World, it is up to both sets of characters to save Kirito and Asuna’s beloved Yui and both groups’ respective Online Worlds.

What I love about the SAO series, at least in regards to the gaming entries, is their willingness to explore brand new ideas instead of sticking too close to the anime seasons or the manga. Because of this the stories can be developed as the developers see fit while still using the characters and ideas that make the series was it is. Millennium Twilight is no exception – especially since they explore the idea of one digital VR MMO world invading another. After seeing the original SAO location of Aincard from the first season appear at the end of it inside of Alfheim Online the idea isn’t out of the question so to add some depth and craziness to the mix, enter time travel as the invading MMO world is from the future.

All of these factors have allowed to create an experience that is both new yet familiar as the world of Alfheim Online is still there but different. While familiar characters will be making their appearance both inside and out of the game through communication, the inside has gone through a bit of overhauling as the two worlds have started to merge. What does that mean for the players still left inside? Nobody wants to leave as this “new event” looks too cool to pass up. Unlike Aincard and those kept within once Kirito beat the game, players can log out but once they do they can’t log back in making this a quest that the main cast need to see through to the end regardless of what it does to their outside selves. It’s a neat approach and it really comes together once you get fully hands on and get to start exploring the fields and the new city hub that is a result of the world mergers. The city offers up shops to buy new equipment and items as well as connect up online and play with other players. While there is an autosave, there’s also a location in order to manually save which lets you know for absolute certainty that your file and progress have been preserved. Finally there’s the most important factor that comes through the Quest Board that should be frequently visited between story sections in order to get the most out of it and obvious rewards for your efforts!

Now while this next statement is just a personal thing, I would love to play an original SAO title with a brand new self created character not unlike Dragon Ball Xenoverse. The reason for this is that once again with Kirito in hand you start off in the level one-hundreds. Not much is going to kill you and the beginning monsters and even boss fights are a bit of a joke because of how strong you are. That said the system in place while being in the level one-hundreds is fun.

Starting off with Kirito and Asuna it’s not long until you have Black Lotus from Accel World in your party and then other members start to trickle in from both sides. Only being able to take three members out at a time you’ll soon have enough choice for exactly how you wish to fight. Dual-wielding, larger two-handed swords, bows, quick rapiers so on and so forth are all at your disposal once they’ve joined your party. Switching between these characters is also fairly easy and once the meter is filled up joint attacks can be used for loads of damage. 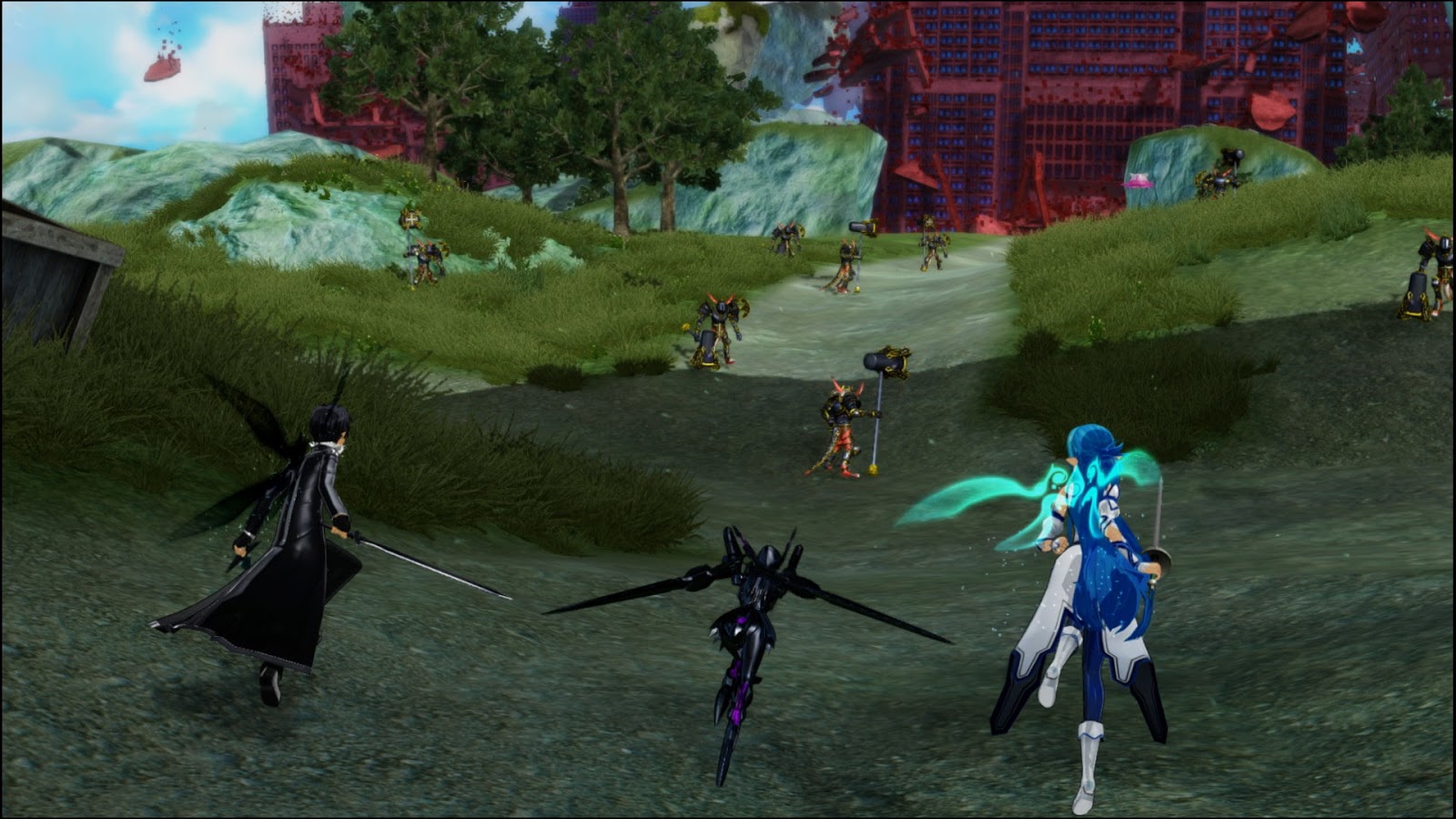 There are some gameplay elements that while they work, you can tell that they were either designed for the PS4’s touchpad or were designed that way to supplement for the lacking L2/R2 buttons. While most of what you need will be found between the L or R shoulders and both sides of the controller, switching between characters and putting things in focus require tapping the screen. Now these work for the most part as long as you remember that you need to hit the screen in order to perform this actions.

Combat is smooth with a ton of skills that can be assigned to the above mentioned L and R shortcuts. Between these and your regular attacks your arsenal won’t be lacking. As characters level up and use these skills they’ll obtain new ones and make the ones that they currently have more powerful. The only issue is that because of how high of a level your party is most of these mobs are basically just hanging about for you to create new skills or obtain materials as they really don’t pose a threat or a challenge and are really there for filler between main story events.

The one thing that I loved above all else are the flying mechanics. These can honestly be so hit and miss that it was awesome to be able to fly around either slowly or quickly and then just swap into battle mode without your toes ever hitting the ground if you didn’t want them to. Boss battles the same could be said with them flying around and you could attack from either above or below as you saw fit. It felt natural even inside of caves where you were limited to how high you could go since they don’t let you simply fly to the end instead of trudging over the pathways. 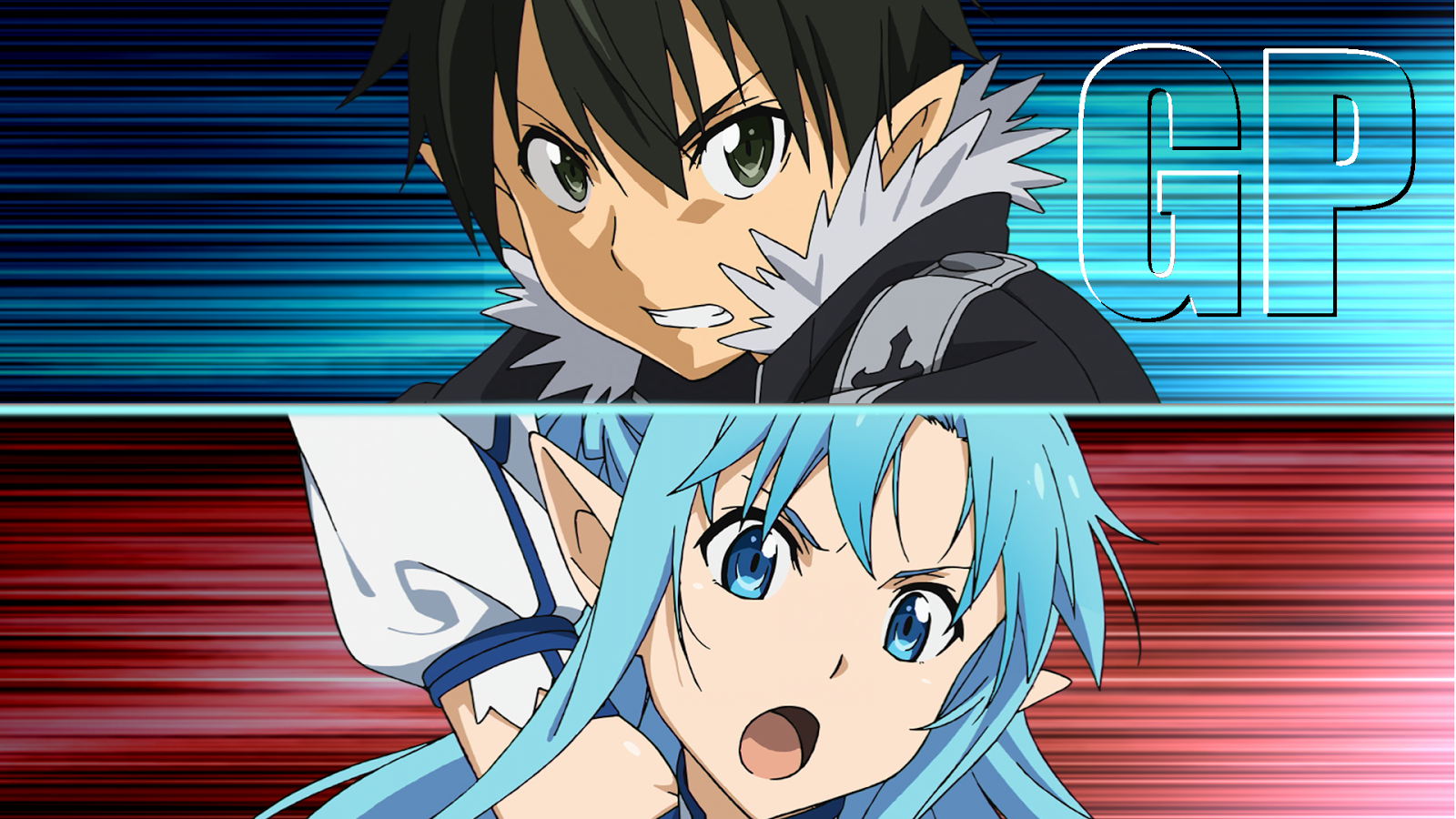 One major downside is that regardless of how hard they tried to make the Vita version work, the limitations of the system can be seen in the performance. Not currently having the PS4 version to compare it to, AW vs SAO can often be laggy once things come into focus or make their appearance on the maps. Monsters in the field is a common example as you are often out there and when flying around you can have multiple levels appear causing the system to slow down.

Even in town when walking into a building it can take time for some characters to finally load which wouldn’t really be such a bad thing if you didn’t need to talk to them in order to initiate a quest. While I appreciate the continuous love for the system, this is not the first time that the Vita version suffers because they tried to pack just as much in as they did on the much larger and more powerful home console.

Accel World vs Sword Art Online: Millennium Twilight is a great title though the smaller platform suffers from the lack of power that the larger one benefits from. Is it worth diving into? Definitely. If you don’t have a PS4 then I would recommend picking this one up on the Vita. If you do have a PS4 it’s probably a safer bet to take to the skies on the bigger platform unless you really enjoy the portability factor. One way or the other it should not be passed up on for fans of the series. 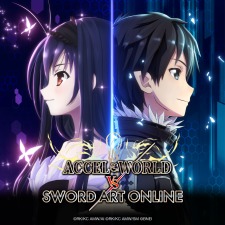