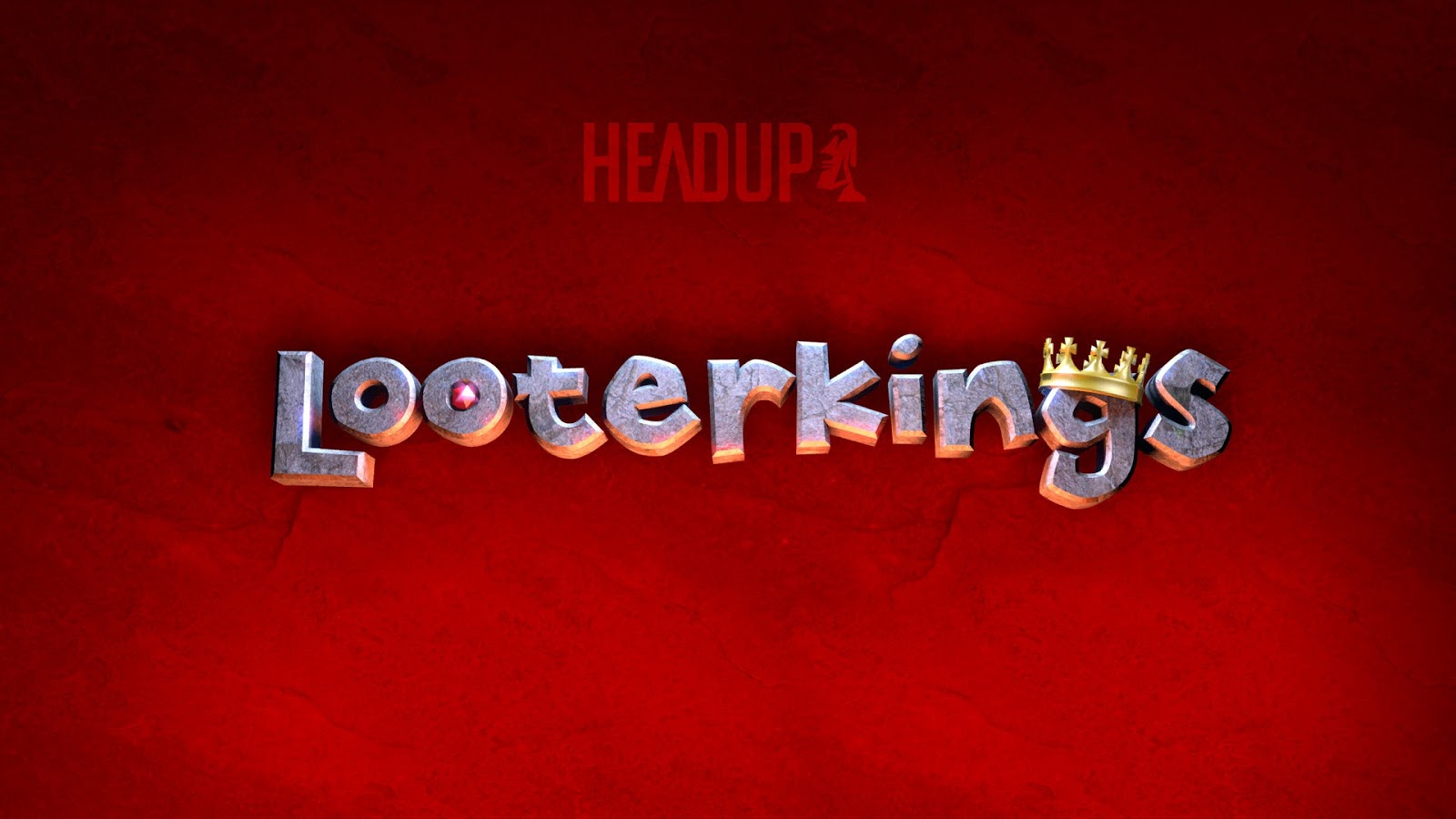 Looterkings, like Voodoo, is giving new meaning to starting off with nothing at all. Quite literally, you and up to three friends get to run around a dungeon naked while starting off with a random weapon to assist you in collecting experience. With these experience points you get to level up and acquire enough gold in order to at least put some pants on for a bit of modesty.

The premise behind the dungeon crawl is not a new one, but it’s implementation has some thought put into it. If you really want to, you can explore the dungeons on your own but with the amount of enemies that spawn even in the beginning room coupled with how fast they move, you’ll want friends or even some random people along for the ride. Looterkings really is a co-op experience and with permadeath turned on even just on a normal difficulty? You’ll need it.

Every character starts off with a naked goblin, a random weapon and a God Power before they start to kill off the dungeon’s residents and loot their hordes. While not being so bad with a melee weapon, this can take some time to get used to with a ranged one as there is no reticle or cross-hairs available. You have to guesswork how to fire and the angle that should be taken for your shots. It eventually becomes second nature but in the beginning, especially if you decided to try at it on your own before embarrassing yourself online, it’s not easy. 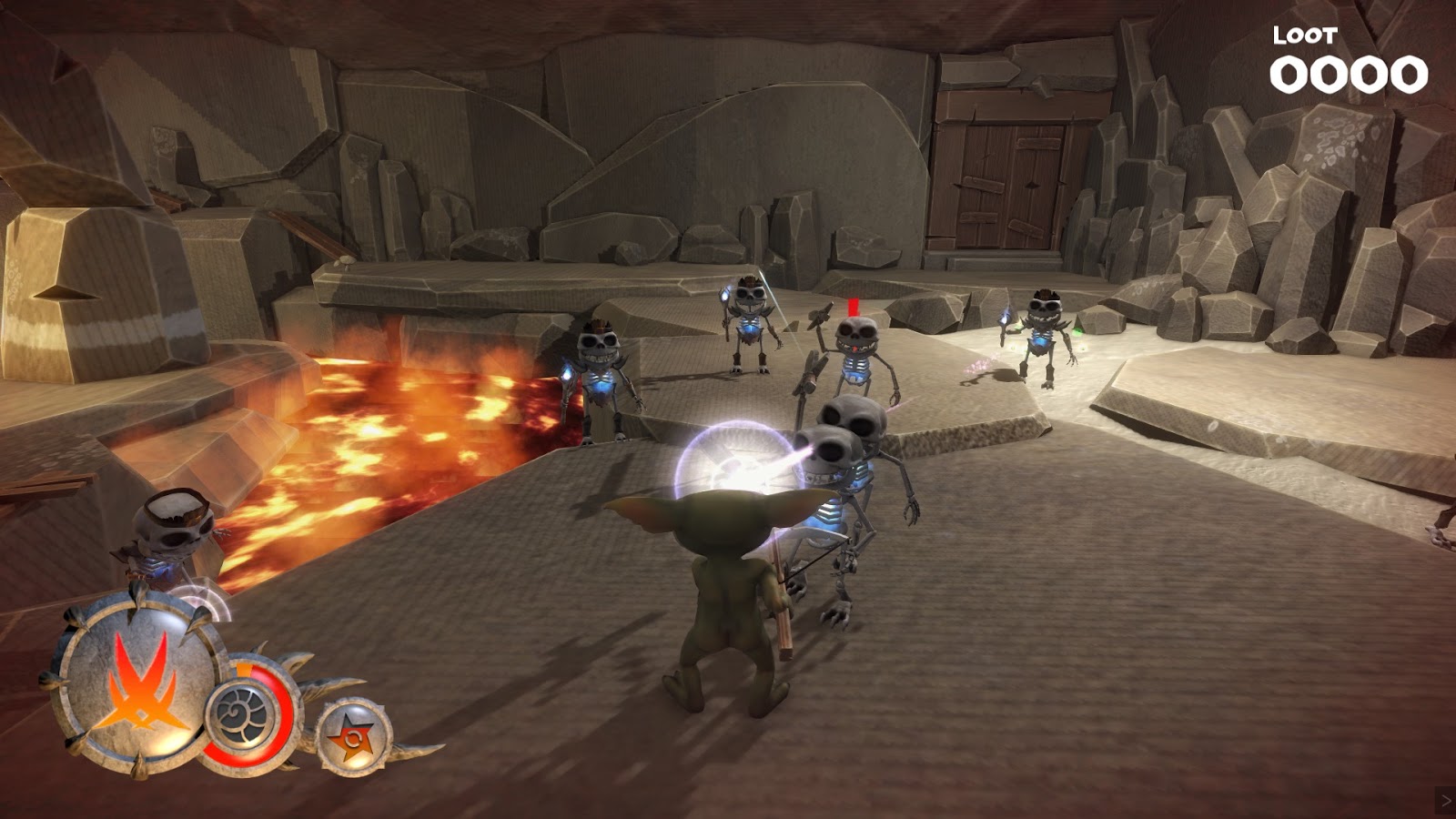 The dungeons that you’ll be exploring are a tad on the crazy side. Split into a slew of different rooms on different floors, you’ll never know what’s behind the next door. Is it fiery exploding rats? Elemental crazy knights? Goblin Skeletons? Wizards? Rivers of freaking lava which was not cool to fall into or spikes that are only waiting for you to miss your jump across a set of chains. Does the room make it easy to move around in or is it designed to allow the enemy to swarm you and your group if you have one? The answers to these you’ll never know until you open the door which makes the whole thing exhilarating.

As you move through the room, kill off the residents and loot their stashes, you’ll need to spend some of that hard earned cash. Available whenever you’re not walking into a brand new room because you get locked into a death match, you can either go about it the old fashioned way and walk back or you can simply teleport and hopefully remember the path to where you’ve already been. By the way there’s no map and everything looks alike so finding your way around can take some time.

The shop itself is a simple interface with multiple tabs for the different types of gear that can be acquired. You want swords, go to the swords tab. You want headgear, go to the headgear tab. It is designed to allow players to quickly go in and out and not waste time that could otherwise be spent inside of the rest of the dungeon. This said, the starting inventory of the shop has some rather slim pickings which is where leveling up comes into play. The more that you level up the more than the shop opens its inventory over to you. You’ll still need to loot the hell out of the dungeon mind you to afford anything but I mean one problem at a time right? 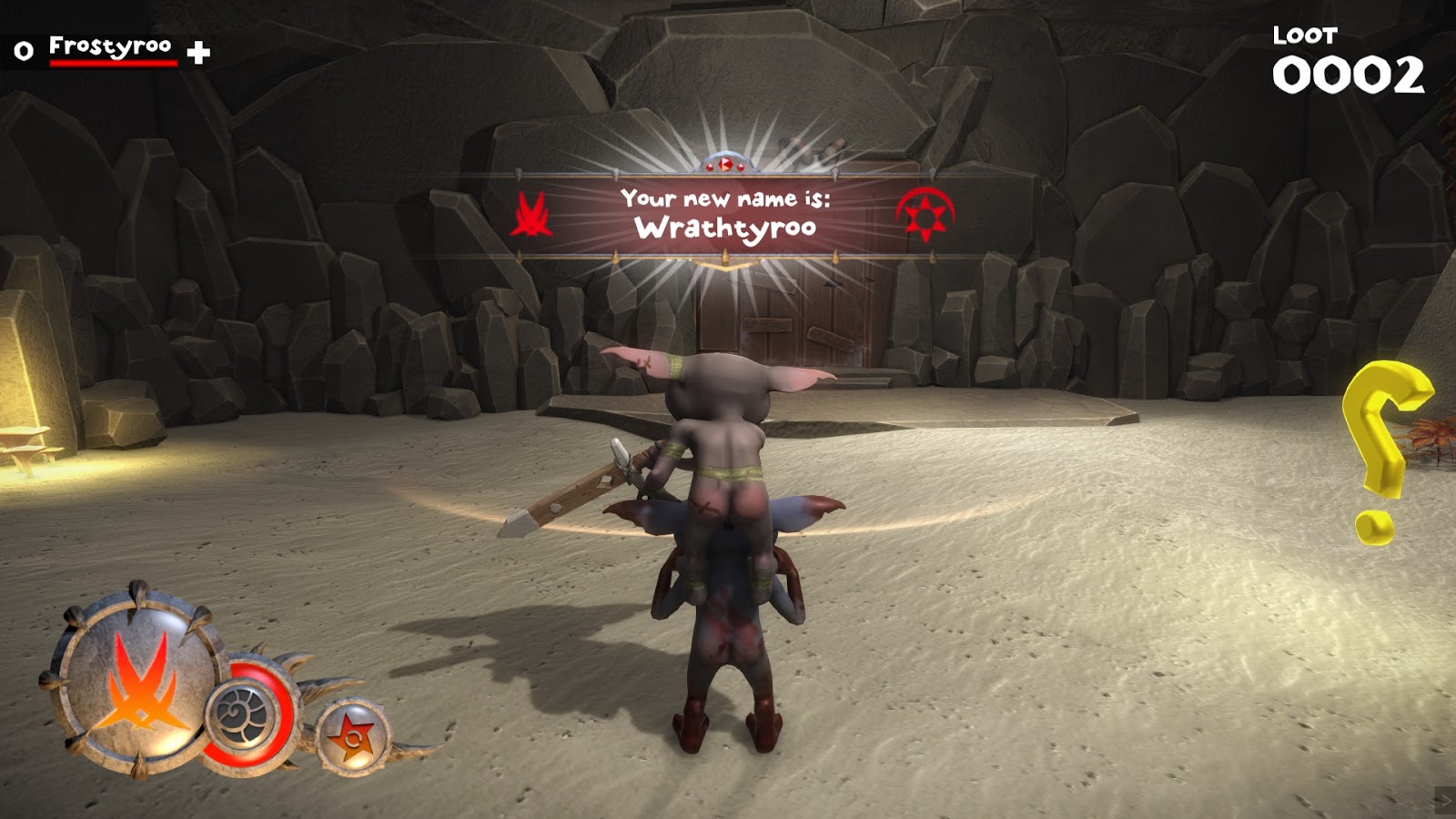 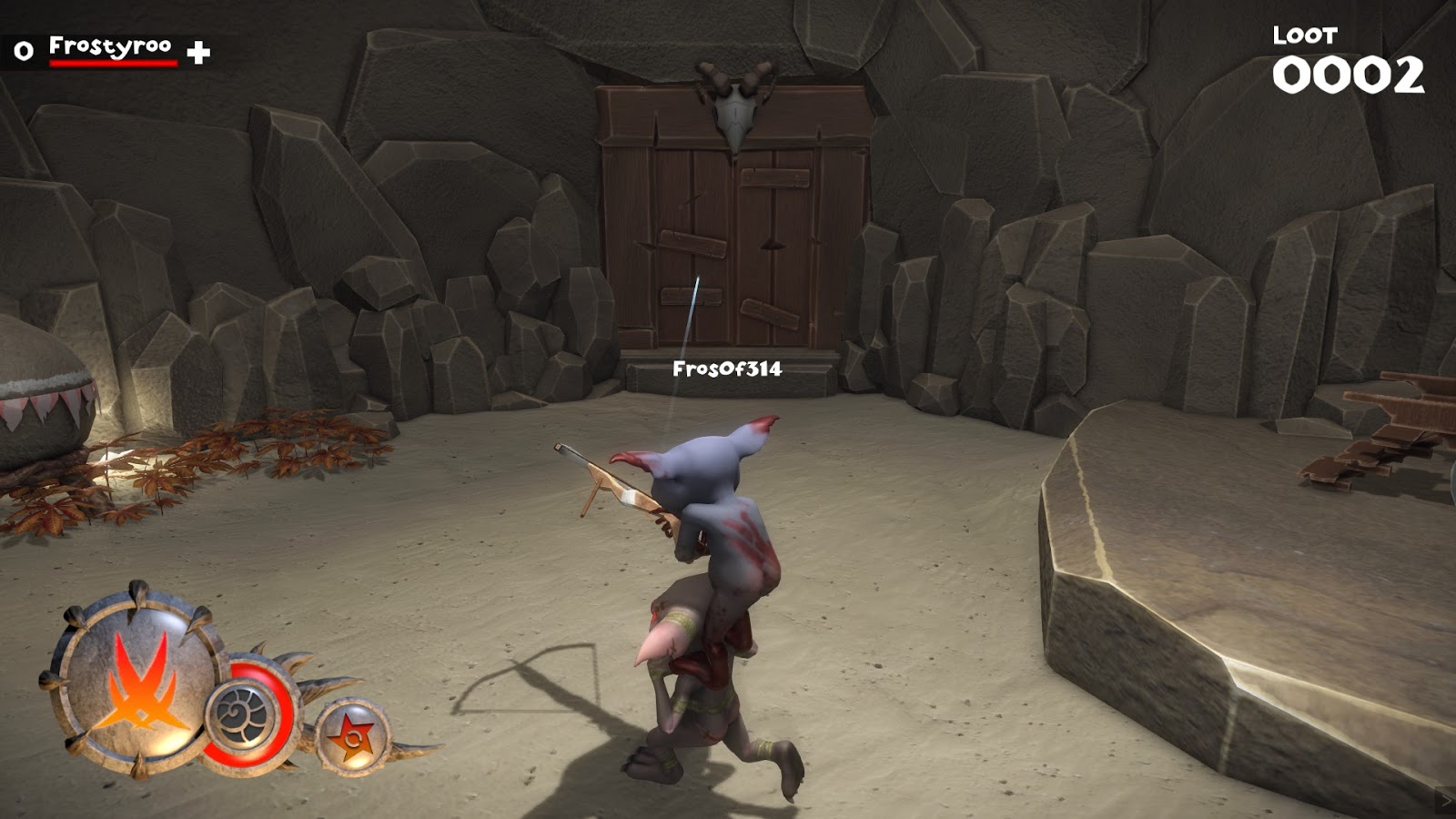 Something interesting, and another reason to play co-op, is that one player can jump onto another player’s shoulders to piggyback around the dungeon through a “two is better than one” approach in a literal sense. Together you not only become stronger but your abilities are also boosted meaning that if you used to summon one ghost of the last thing you killed to act as a decoy you’ll now summon two. Other God Powers such as turning invisible and healing up are also powered up making it easier to stay alive. As a last note on the subject, the names are merged and change depending who is on the top and who is on the bottom.

Other interesting elements are more from a streaming perspective and players have the chance to join in on their favorite streamer’s, if they play, channels and either help them out or make them lose. Like Fortnite it’s interesting to see that developers are adding in that little bit extra to bridge in those that do use services like Twitch for a bit of a different experience.

The one thing that I constantly kept coming back to while going through Looterkings is how awesome this could be in a Virtual Reality environment. While I myself don’t yet have one it feels like the type of experience that could be really cool to run around in even if it’s in a third person view. 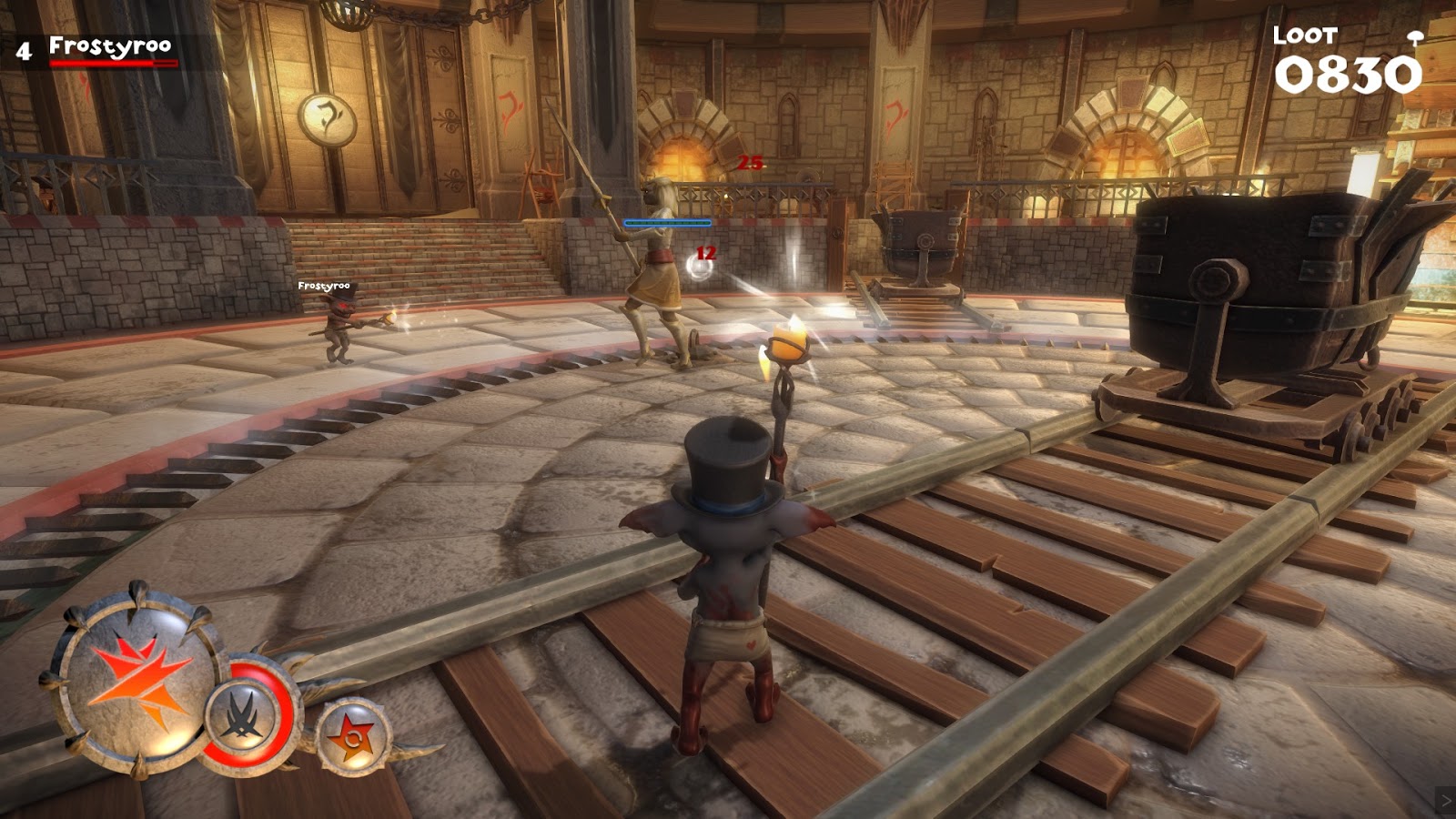 Overall Looterkings is a lot of fun especially since it’s designed to make you compete to come out on top. The present formula is a good one and the permadeath aspect really makes you think about how you go about it. If I could wish for anything else it would be better ranged combat as even if you get used to it, it’s hard to aim your special abilities.

Article by Pierre-Yves
Lots of time dedicated to playing coop by Marc L.