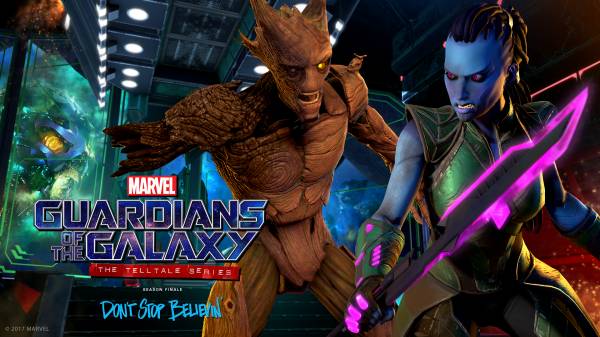 And that is a wrap – our trouble-making Guardians provide a satisfying conclusion in  Marvel’s Guardians of the Galaxy – Episode 5: Don’t Stop Believin’. A pretty predictable ending does not diminish the great overall story arc punctuated by some genuinely entertaining moments for several of our characters, leaving me to hope that there will be more seasons to come.

The shining standard for Telltale Games between myself and Chris has been Tales From the Borderlands (Chris scored it a 9.5/10). That series had brilliant voice acting that helped to prop up a story that seemed to perfectly walk the fine line between funny and serious, investing me emotionally as I waited to see how the game would conclude.

This Guardians of the Galaxy series shares many of those same traits, with characters I cared about partaking in a series of challenging events that were serious, but also punctuated by moments of humorous levity. Toss in some colorful visuals and a fantasy / science fiction theme and it is easy to see why I have been comparing the two different series a great deal during my reviews.

That being said, I think the finale of Borderlands was better, in part because there were more surprises in store. Elements of that final episode were perhaps predictable, but this is where a property like Guardians of the Galaxy probably can’t compete with that level of unpredictability. Still, kudos to the team for surprising me a few more times than I would have expected.

Luckily, the overall episode is still a really good one. At the end of chapter 4, the party was all but torn apart. Try as he might, Peter was in an impossible spot where he could not hope to make everyone happy. We continued to gain insight into members of the party, helping to better illustrate why they do the things they do (after all, Rocket is not known for his cool, calm way of thinking). These moments tend to be very emotional and are when this series has been at its best. Now Peter finds himself having to reflect on his decisions up until now as he tries to figure out a way to get the band back together, so to speak.

Without spoiling anything, the trend of party flashback continues, this time with Groot. I saw this coming, as he was the only member of the party left, but I had my doubts how a guy with a vocabulary of exactly three words would carry a scene like this, but I have to say it worked better than expected with some very creative handling by the team. 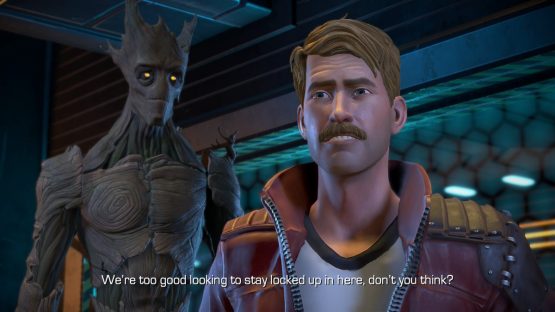 The good news is there are plenty of choices to be made in this episode, though the amount of impact they have is somewhat dubious. This also felt like a somewhat more linear episode in general, with only one point of real exploration, which is not necessarily a bad thing but something to note. As with the prior episodes, a major shout out for the fantastic soundtrack here, ranking it as one of the best Telltale Games has used to date.

Marvel’s Guardians of the Galaxy – Episode 5: Don’t Stop Believin’ continued the great overall season and provided a comfortable, fitting end to everything. A few spots were slightly glossed over here and there, but overall I found this to be a satisfying conclusion to one of the better series that Telltale Games has authored. Hopefully we will see more of the Guardians and their antics in future seasons.