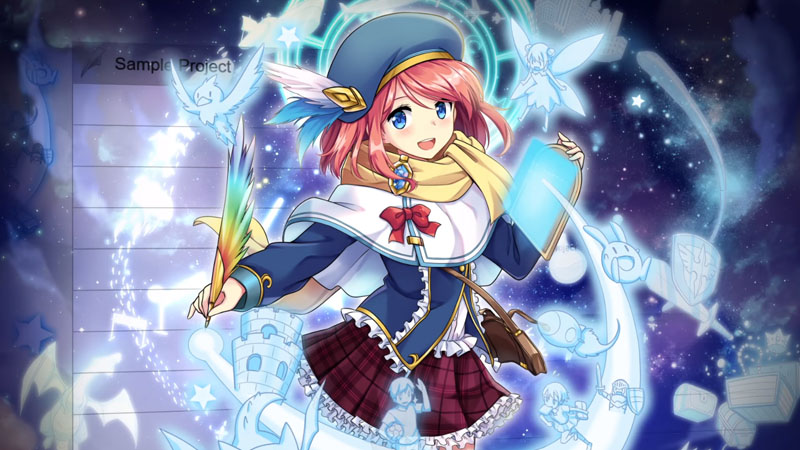 Maker programs are hardly new, but admittedly most of my time has been spent with those of the RPG variety (though I have dabbled in other types as well). To its credit, Visual Novel Maker actually surprised me in some good ways. I had no idea what to expect going into it, but all in alll I found the software pretty accessible while remaining rather powerful for fans of the visual novel genre.

Degica has a long history with this kind of software, as well as publishing titles made in their RPG Maker series. I am a huge fan of RPG Maker, having used the software in different versions throughout nearly two decades now. Here at CGR, arguably our team’s favorite genre is the RPG one, so the software has always been a good fit. A genre that we are fond of here but that gets far less attention is the Visual Novel one. By default, this makes Visual Novel Maker something of a niche piece of software, but it is a polished, clean bit of software that delivers what it promises.

For one, you start things up and what you see are your most recent projects (unless this is your first time with the software). Here is where the ‘Maker’ games could use some improvement – onboarding. I’ve been using this type of software for nearly two years, I have some experience coding, so none of this is terribly daunting for me, but truth be told – the Maker games are not overly accessible to newcomers. Instead of having a proper tutorial, you have access to a handful of very simple projects that help you to understand how the software can be used. On the one hand, I do like this sort of real world application ‘show and tell’, but on the other more training resources right out of the gates would not be a bad thing. 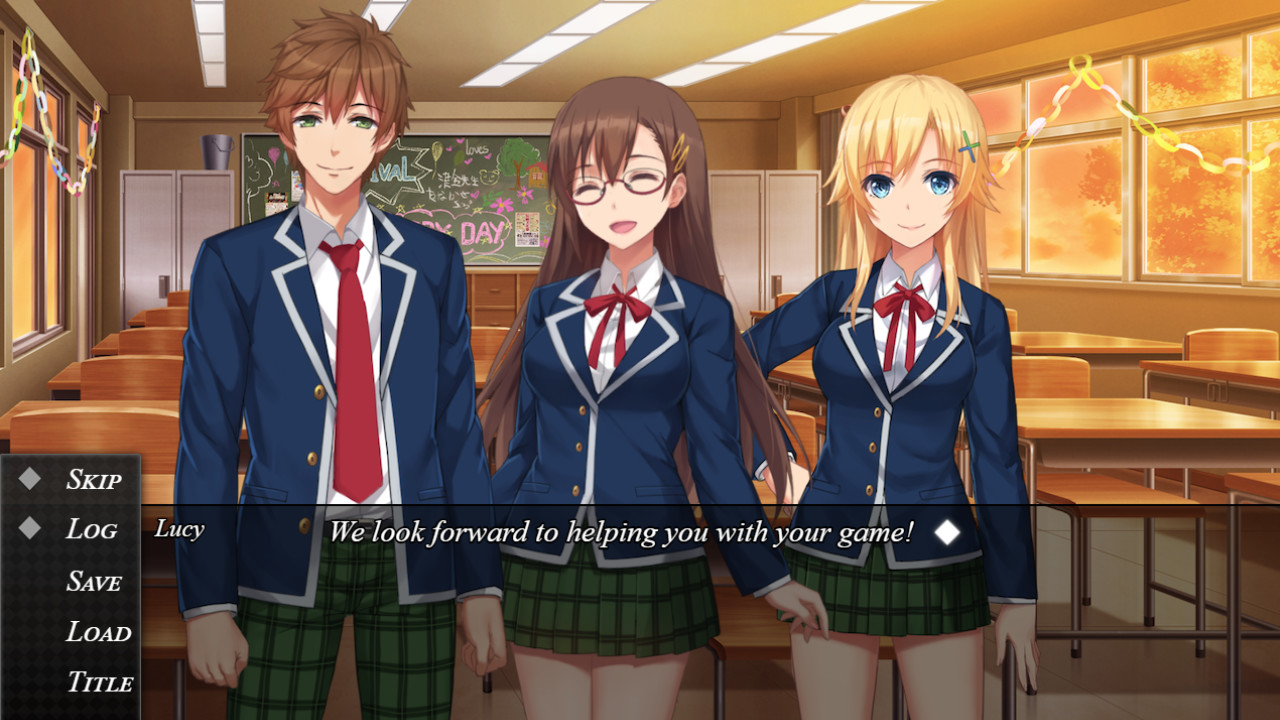 However, once you understand your way around the software, you can start focusing on what kind of game you wish to make. The asset library looks good, as they generally do in the Maker games, and they work for your first couple of projects because they have a nice uniform look and feel to them that gives your end project a nice sense of consistency. Dragging and dropping assets and figuring out how and when to play music and sound effects all works pretty well with the menu-heavy system that shares a lot of similarities with the RPG Maker engine.

These tools allow for a pretty simple but effective framework for building out games. There are deeper options for those who have a desire to create or incorporate existing scripts (I suspect that the community is going to be a big factor here, but more on that in a bit) that allow you to sort of ‘break the mold’ and do some interesting new things with the game. This is great for those who want to create something that is a bit different than the default setting of scenes and choices that can give the games a somewhat Choose Your Own Adventure style to it. There is a lot of selecting, variable setting, lots of timing (these are visual ‘novels’ after all), but for those who would rather tell a story, I can see where Visual Novel Maker might be more appealing than Degica’s RPG Maker software (which tends to be a good deal less linear, whether it is creating maps to walk through, customizing classes, modifying subsystems and more – on top of telling a story). One of the trends I have noticed over the years with RPG Maker is that a lot of people struggle to finish their projects. I think the more linear, focused narrative nature of Visual Novel Maker means we’ll see a lot more completed projects, which I think is actually really cool. 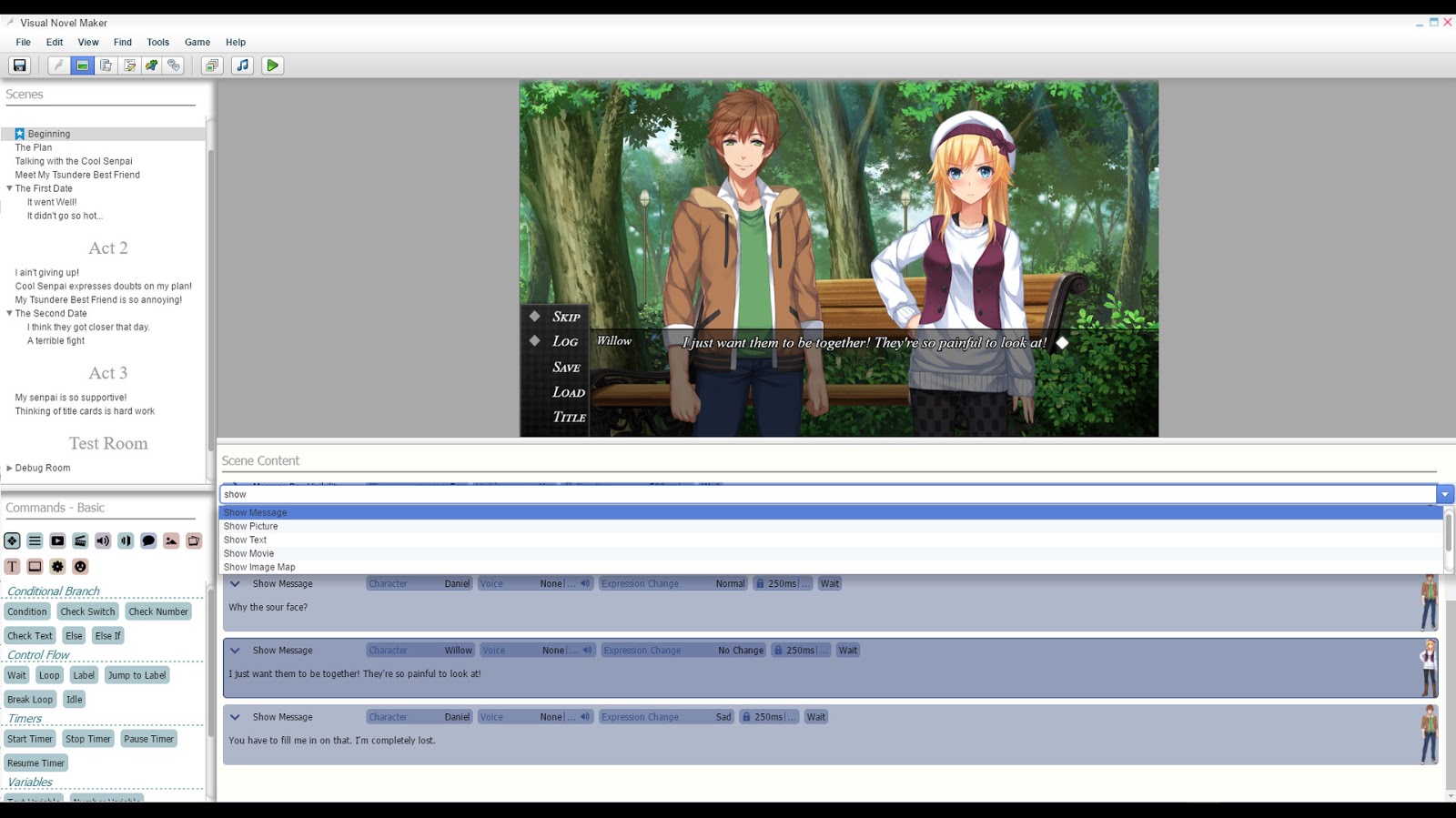 So I touched on community earlier, and that is because community has been huge for keeping the RPG Maker series relevant over the years. Eventually people want to move away from the RTP or default assets (otherwise no matter how unique the words you type for your story, in the end everything ‘looks and sounds’ pretty samey by the time a few hundred projects from the community are released). One way to add variety to the game is the aforementioned scripts, but another is going to be in importing assets. Now personally, I can’t draw worth a crap, so if I decide to step out of the default asset arena, I’ll have to rely heavily on more talented people than myself to share their resources down the road. Ditto the music. Chris on our team is actually really good at that, but I am not. I’ve always considered my strong suits to be the writing, the story direction and the scripting and I think Visual Novel Maker really plays to those strengths, but I look forward to what the community produces over the coming weeks and months.

This is a tool, and to that end, it is a good one in that it does a nice job of streamlining your decisions and making it easy to produce a playable product. However, Visual Novel Maker does rely heavily on logic, even if you are not asked to do any programming. You have to possess a pretty solid understanding of if > then in order to make the most of the software. Sure, you can essentially just storyboard things from start to finish in a linear fashion, but if you want to make any kind of game experience out of this where those who play it have some degree of control over the story and its outcomes, you will have to commit a decent chunk of time to almost developing a flowchart of events. I found myself spending probably 15% or so of my time outside of the actual software, just making sure I had my events lined up in logical fashion, and that made things much easier for me when it came time for my to try and actually use the software to fashion my stories. 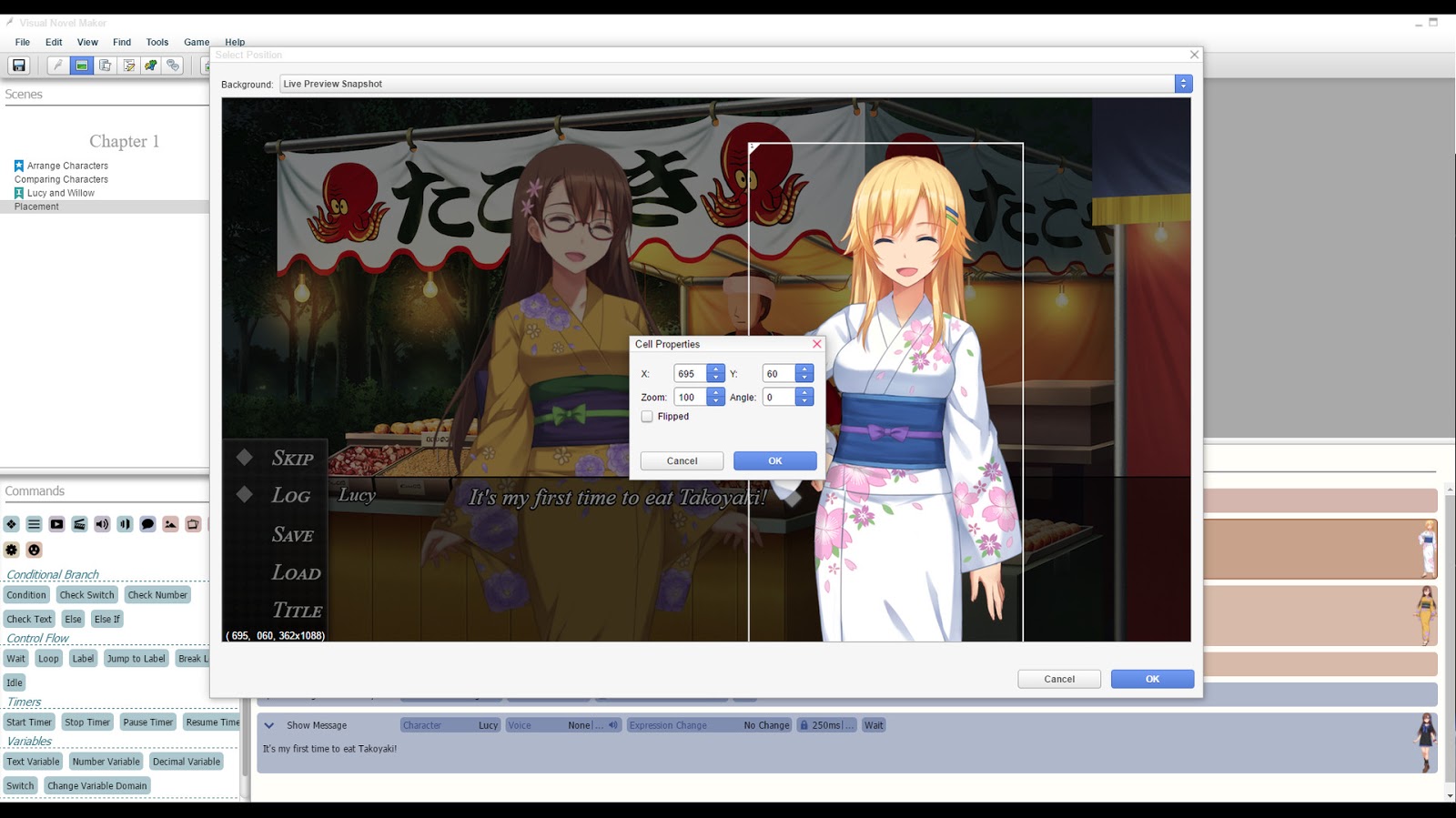 So while I do have a quibble about the lack of actual training materials, I do want to call out how good the overall UI here is. Hovering over items often reveals a short box that explains how it works. Navigation is clean and the color coding used to help identify items and demonstrate linkages go a long ways toward keeping projects organized. This is the kind of software that requires some trial and error, and perhaps my experience with prior ‘Maker’ programs means I am going to be quicker to pick things up here, but once a concept clicked for me, it was easy to apply it.

Visual Novel Maker is not going to be for everyone, simply because the genre of Visual Novels is still seen as being incredibly niche. That being said, I have to say I was pleasantly surprised by what Visual Novel Maker had to offer. I thought perhaps it would prove to simply be a narrow slice of what RPG Maker has had to offer before – focusing on scenes and text boxes and little else. I’m glad to have been proven wrong, because the engine is more robust in its offering of features than I had anticipated. I think the software would have benefited from more numerous and varied assets as well as some proper tutorials, but the overall package is still a really solid offering from those who have an itch to create and tell their own tales. 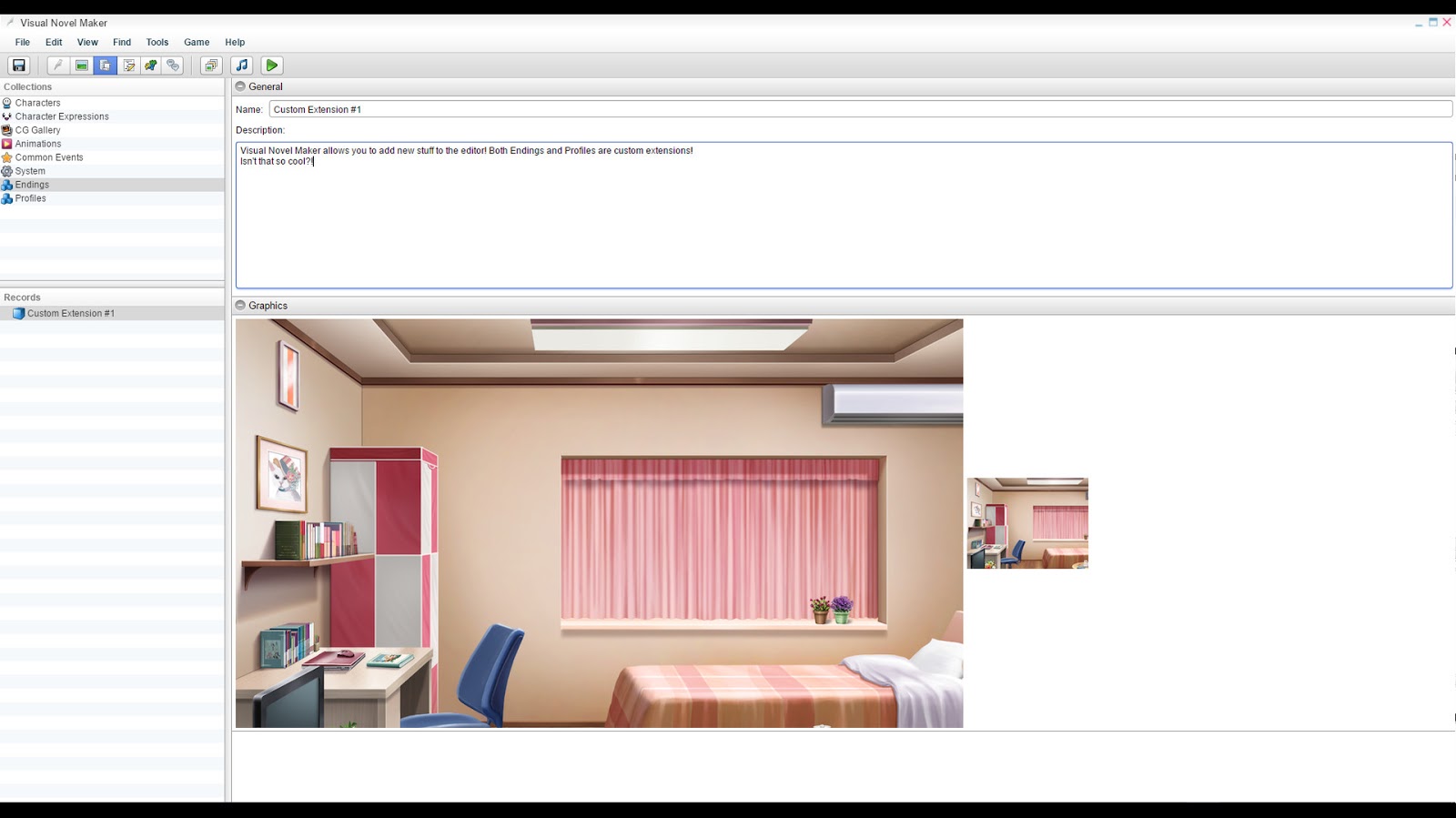 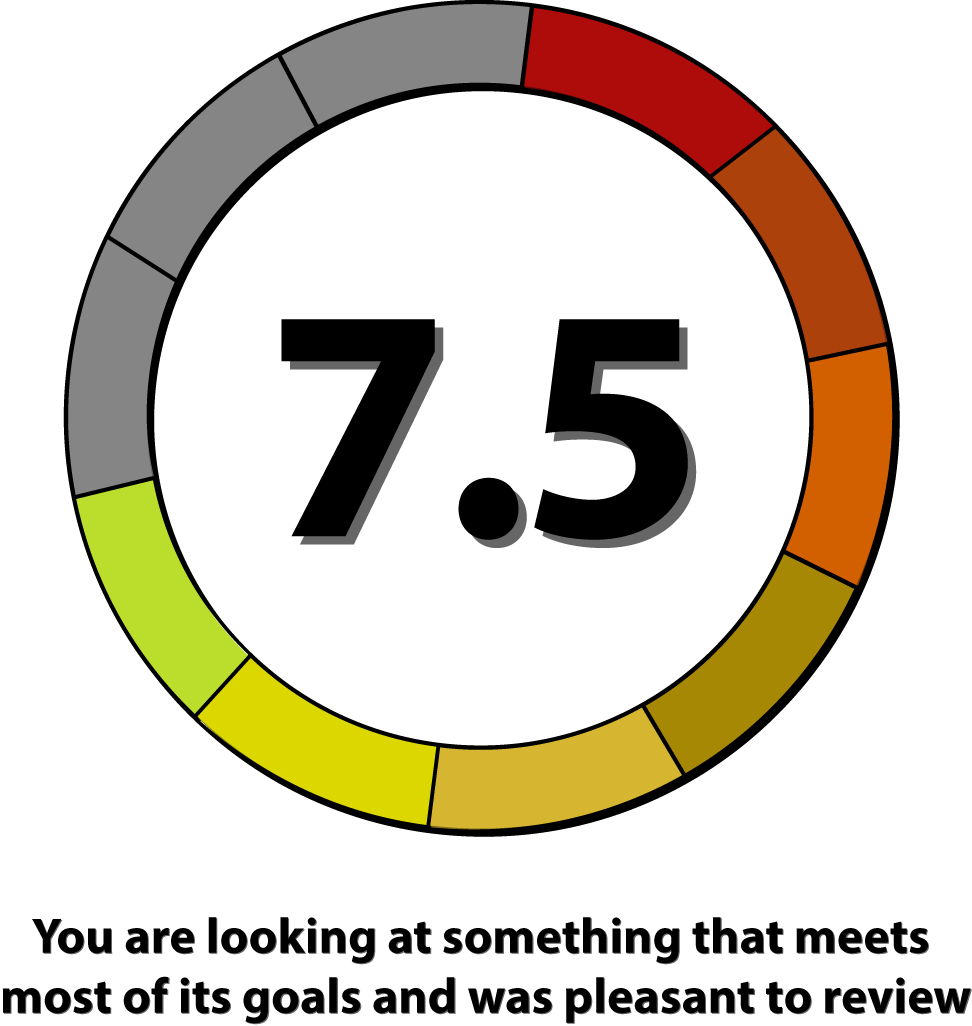