Rainbow Skies is the sequel to EastAsiaSoft’s Rainbow Moon that originally released for the Vita years ago before finding its way over to the PS4. Taking a new direction, you no longer have a single protagonist but instead a true party of three brought together by some careless magical casting binding them together until they can finally break the magic spell that holds them together.

Starting off after having made a bad decision, Damien wakes up to a legendary hangover right before his exam being given to him by none other than his friend Layne. Starting off the exam with the knowledge that if he doesn’t ace it with high marks, Damien will be cast out as the worthless bum that he’s been up to this point in his life, he gets right to it hangover and all. Turning things from bad to worse with what should have been a series of “good ideas”, the boys both fall to their deaths off of the flying island that they’ve called their home for the past nineteen plus years into the perfectly timed casting of a binding spell meant for a monster cast by Ashly on the ground below. Who said JRPGs can’t bring about a wacky good time?

Stuck together, the three adventurers set out in this brand new world for the two of them that have been told since childhood was an uninhabitable region that would kill them simply by breathing the air found there. Rainbow Moon was all about a warrior cast into another world when he acceptable a duel and was tricked and punted into another world where he eventually picks up others to join him. Rainbow Skies takes a much better direction by having a cast come together rather comically with plenty of humor and dialog making it feel much more like an adventure than simply a really bloody hard grindfest. 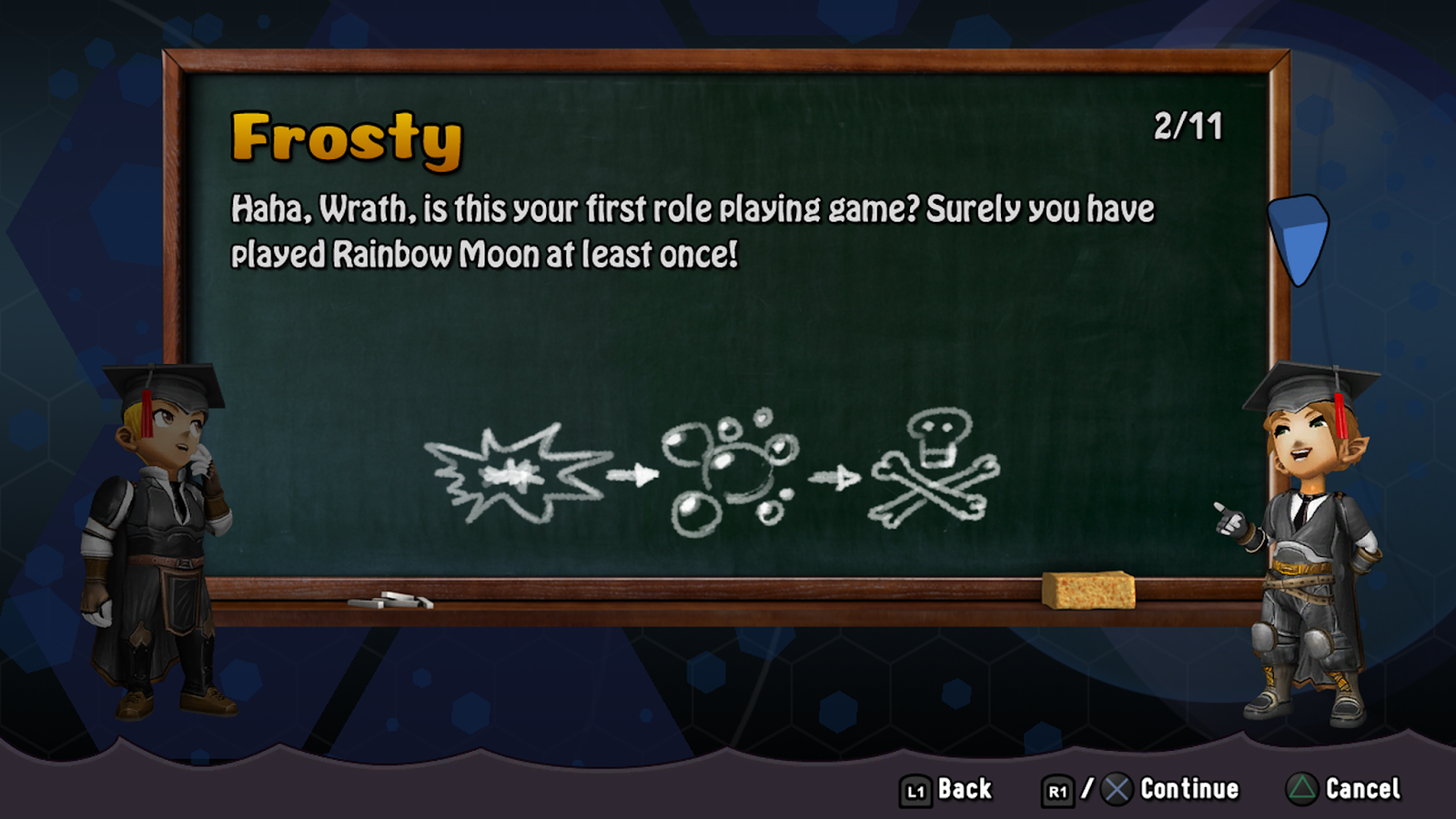 Rainbow Moon was bloody hard. Seriously it was not easy to get into as you had to fight for everything. Wanted to move forward? Combat. Wanted to get just a few coins to heal up? Combat. Died? Had to fight more money to heal up and buy new healing supplies. Rainbow Skies in comparison, is much less of a grindfest as things are a lot more balanced especially with the fact that you start off fairly early on with all three of your adventurers. If you want to grind to get more powerful, if you want a challenge in order to really test your mettle, there’s an option for that but it isn’t mandatory. If things get too hard, the difficulty can always be dropped from your main menu but in a good twist, you’ll have to re-unlock the harder difficulty which can only be changed from specific NPCs.

Having gone with the fantasy trifecta, your three characters can fully support one another between the Warrior (Damien), the Ranger (Layne) and the Wizard (Ashly). Each have types of enemies that they are strong and weak against before even taking into account their individual skills. You’ll really need to capitalize on these because often there’ll be battles of the three versus ten or twelve enemies and even if they are weaker, there are more of them than there are of your which is where upgrades come into play. The upgrade system unlocks as your party’s levels grow. Adding in points for attacking, points for defense and surprisingly extremely useful, hit points. Because of the often 3v12, you’ll need to survive the hits from multiple sources if you’re going to counter attack and win the fight. Each of these upgrades require a skill point that is dropped by enemies alongside other materials that you can use in order to upgrade equipment which is also a must and should not be ignored especially if you plan on upping the difficulty.

Everyone in this world wants something whether big or small. So because of this there’ll be plenty of back and forths when it comes to acquiring quests and submitting them. With all of these opportunities, it was great to see the whole party involved in the discussion instead of a one sided affair from the “main protagonist” since they are all in the driver’s seat. What I really appreciated was that EastAsiaSoft weren’t afraid of a little bit of Meta and referencing Rainbow Moon through their tutorials which have the character don university graduate robes and hats as mechanics or theories on mechanics are explained to both you, the player, and to Damien who’s a bit on the slow side. It’s a good thing that he’s good with his swords! Now, the biggest factor to Rainbow Skies isn’t its gameplay, but how you can actually experience the gameplay. Rainbow Skies is a shining example of what a cross-play title should be. Loading it onto both my PS4 and my Vita, I currently have my PS3 in a non-gaming location, I could play either comfortably at home on the big screen or on the go while on the bus to work in the morning or in someone else living room while getting ready to do whatever it was that we had set out to do. It’s also hassle free. When you go to save, you can either save to the HDD / SD Card, or, you save save straight to the server. The same can be done with loading which makes it fantastic to move around while you play. Just prepare yourself if you’ve moving from a 103” screen to that of the Vita’s 5”.

Rainbow Skies is a perfect example of a sequel that takes everything from its predecessor and does it better. From the dialog to the various system enhancements and the sheer ease of playing on the platform you want when you want. This is a sequel worth looking into and the best part is that you don’t have to play Rainbow Moon to enjoy it as the adventure itself only references its predecessor in passing meta dialog.