Total War Saga: Thrones of Britannia is an excellent, if rough, Total War title. While I am not personally fond of the Attila engine, Thrones of Britannia gets on well enough as another entry in the long-standing Total War franchise. Though it feels smaller in scale than the other titles, the sheer number of settlements and counties within Britannia can be daunting at first, however as the game wears on it generally falls to one of three different factions. With the added complexity of Viking invasions that release hordes of screaming axemen throughout the isles, Total War Saga: Thrones of Britannia feels a bit like an experiment and one that may or may not pay off. From the 80 or so hours I have put into it, I can say that it is incredibly fun, if sluggish at times, and often ends with me losing yet feeling fully satisfied with my attempt to unite the islands under a single banner.

Though the number of cultures you can choose from seem relatively small, the diversity between them is great indeed, with each culture home to two similar yet wildly different factions. Each faction, like Total War titles in the past, have their own unique pros and cons, though I rarely saw the cons as you can generally strong-arm your way through nearly any scenario. In fact Thrones of Britannia feels far more focused on the (albeit wonderful) combat and less on the diplomatic / economic sides of the franchise. I myself would like to see more diplomatic victory conditions or the ability to use spymasters for subterfuge within foreign lands.

Though missing depth in those areas, Thrones of Britannia is still a great title and out of the long history in the franchise, I feel it is the one most easily picked-up by newcomers. Perhaps that is the goal here; with a smaller, more focused title, Creative Assembly might be able to bring in new players and if that is the case then there is most certainly great hope for the franchise. I partially wonder if the “saga” that is Throne of Britannia is the first of the smaller more intimate style of Total War titles to come. I mean, it would be pretty great to see future “Total War Saga” franchises focusing on smaller areas, perhaps covering North America or even Africa. Food for thought, if you ask me … 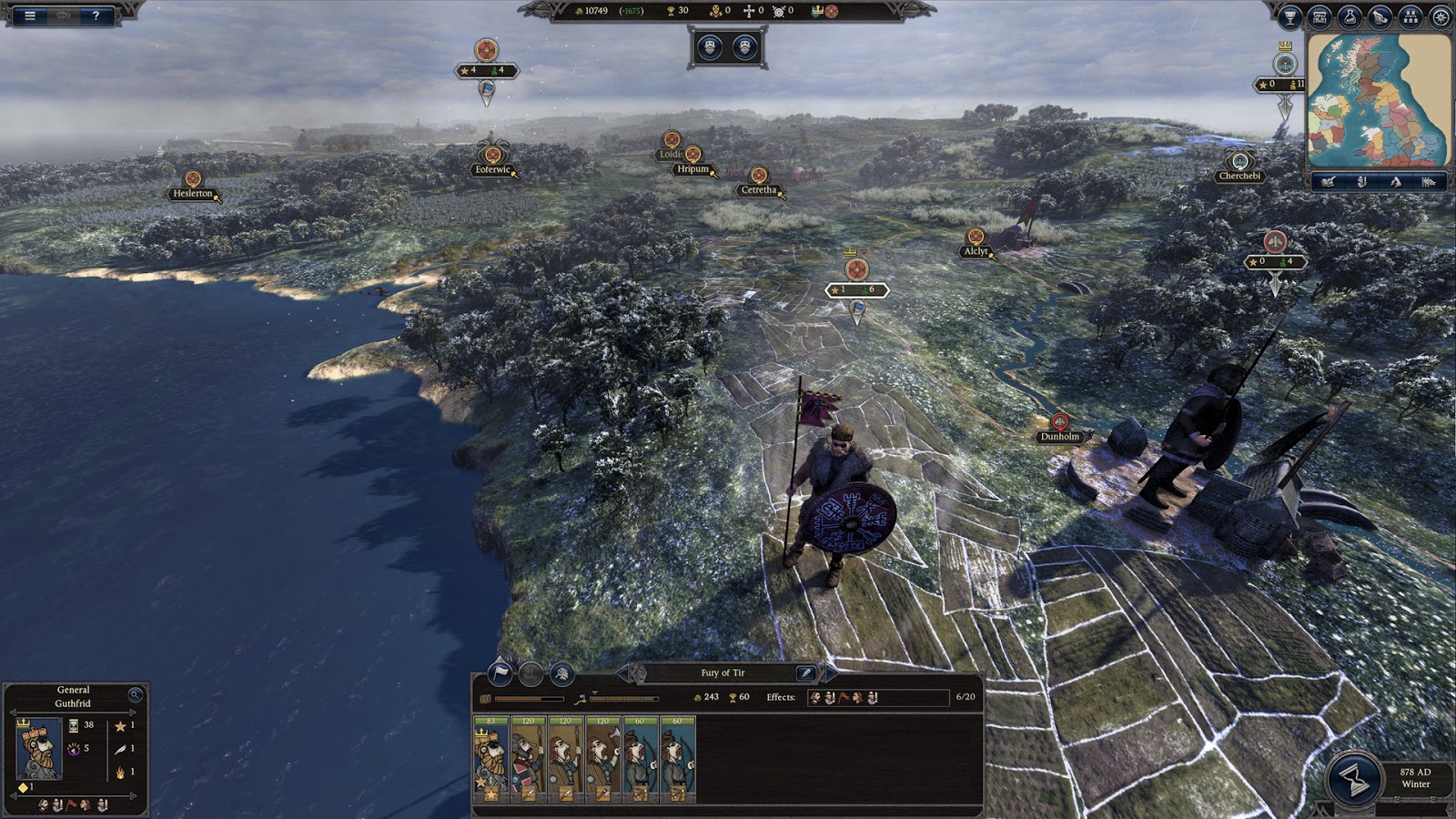 Gameplay is similar to Total War: Attila, which is a relative change from my preferred Total War franchise, the Shogun series, but is still relatively easy to pick up. Reinforcing your armies takes place within the army itself rather than in towns and villages like the previous Total War titles and is something of a dividing aspect of the title; I myself prefer Shogun 2’s method where you do your recruiting in towns/fortresses then merge with the commanding officers as it seems to make more sense when looking at the relative realism / world-building of the game. I just feel more “at home” by going to a settlement and hiring/recruiting new units since that is where, realistically, you would do the hiring of said army. It is just … weird. However, many players will enjoy that method of recruitment and I say more power to them! The more people that purchase Total War games, the more Total War games might be released! Win-Win if you ask me…

Combat, as mentioned, seems to be the big focus of Thrones of Britannia and outside of performance issues and some seriously intellectually-stunted pathfinding, it is pretty excellent. Unit details are clearer and more graphically fantastic than ever before and it is so wonderfully fantastic seeing the *CRUNCH* of a cavalry charge into a bunch of hapless archers … I could watch highlights of cavalry charges all day long. So satisfying. What is even more satisfying is watching a massive heavy cavalry charge being thwarted by a bristling spearwall … so cool. 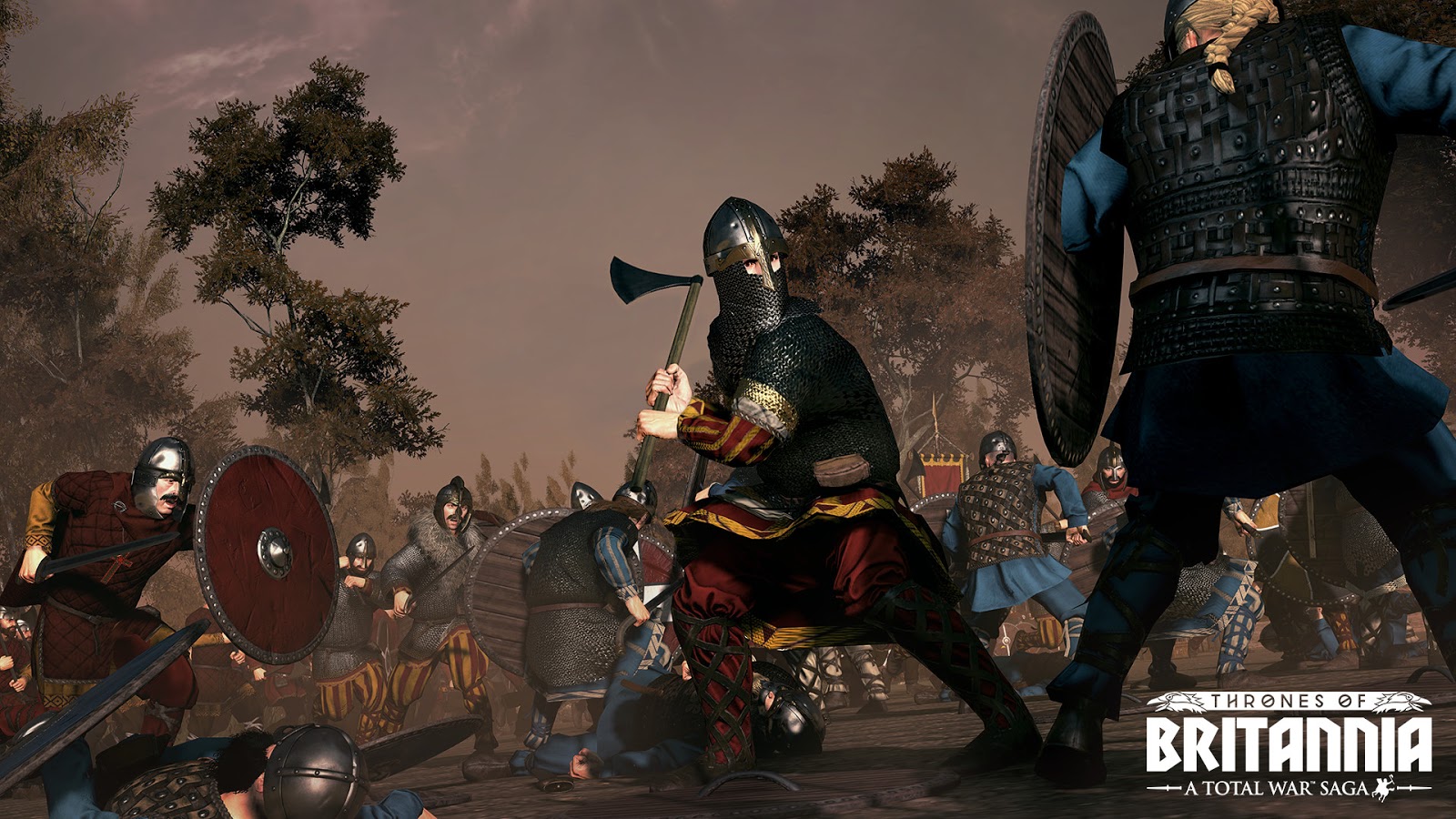 The best parts of the combat though are those taking places in settlements or while sieging; lining up units along your outer defenses while you see the siege towers (if the siege armies built them, which they should) rolling in ever closer is an incredibly tense moment. While I was sieging foreign cities I would often run mounted archers up near the walls in skirmish mode to allow them to draw enemy fire in the hopes that they expend their arrow supply so I can quickly move my light infantry in for the taking of walls / opening of gates. Sieges are epic and often provide the biggest rush with regard to combat. Where I truly struggled was in the use of catapults; whether it was in open field or in a siege, my catapults were always useless. I must suck …