comments Share
You are reading
Salt and Sanctuary – Switch Review 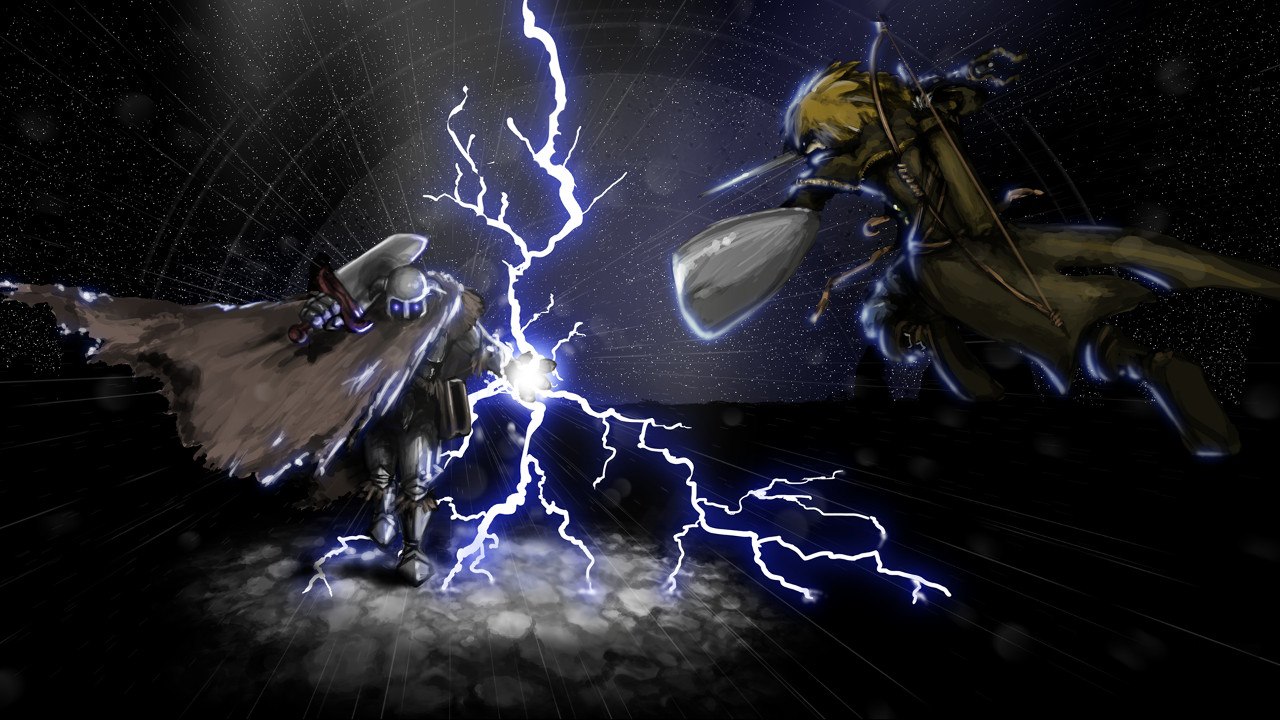 The mind remembers but the fingers forget. Having released back in 2016 for the PlayStation 4, this side-scrolling homage to Dark Souls gave me many nightmares before I finally conquered all and got the platinum trophy just a few months after my brother. Re-releasing both as handheld and console format on the Nintendo Switch, this quest for a princess and the defeat of those that lay between you and her is back to torment you as you collect their salt to make yourself that much more powerful for your daring rescue of a woman you have never met.

Before even getting into what Salt and Sanctuary is, the mind remembers but the fingers forgot. Remembering where a good deal of things are, what item upgrades lead to what, what spells may be useful in a melee build, what classes are good starting points before re-specing entirely, it took me a good dozen times before taking out the Unspeakable Deep. The very first boss. This boss, the first times, felt like a creature being reproach. This massive being that lies as a mix of a Kraken and Cthulhu can waste your physical form in nothing more than a single hit. You’ll just get him on your next playthrough you tell yourself. Yeah. You’ll know what you’re doing and you’ll square up the accounts.

This boss can only be fought when you have nothing more than what your class starts you off with. Manual dexterity is required and you’ll need to be careful. Once you take him out though? The rest of the adventure falls into place rather smoothly. Or does it? 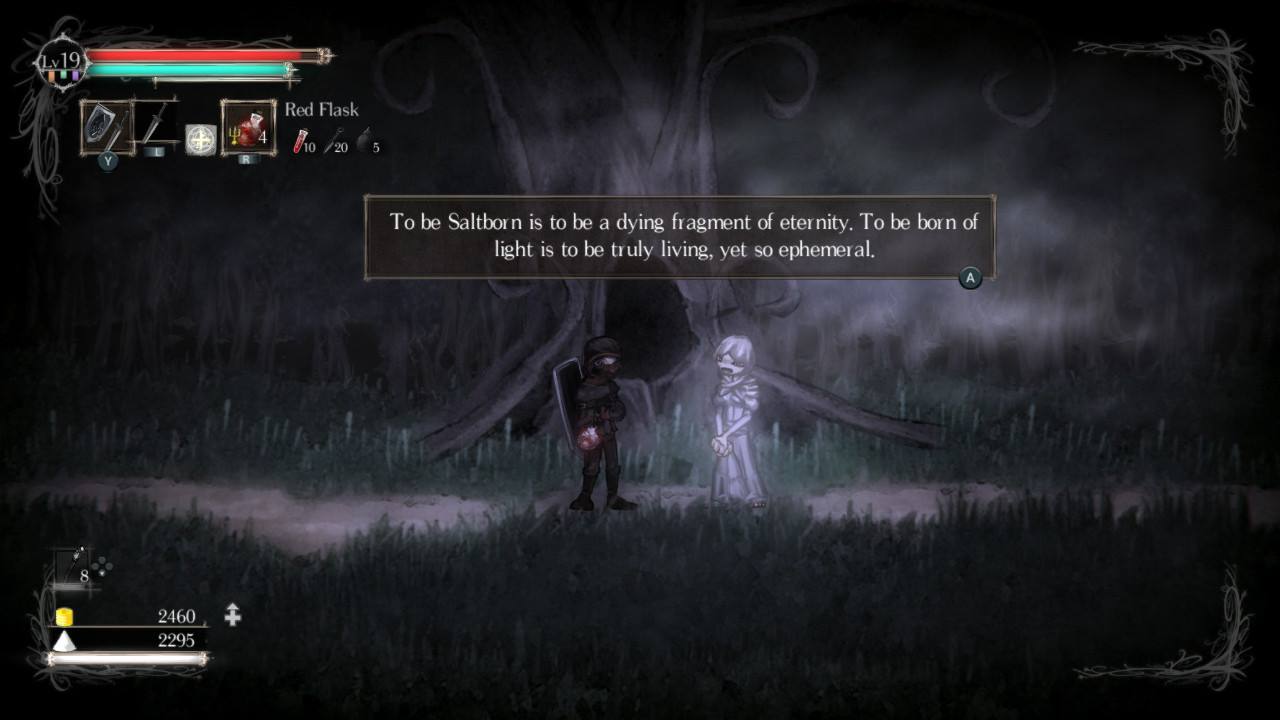 Salt and Sanctuary is a somber tale in both narrative and graphics that pays homage to the Souls series that has come so far from its once niche bearings. Having set sail with a Princess on board, the ship is attacked by both humans and a deadly creature alike. Win or lose, you’ll find yourself washing ashore with nothing but what you started off with as you are lead into your first sanctuary. This somber, yet relaxing location, is where you’ll find a moments peace on your quest as you move further into the island conquering those that stand against you and collect their salt to bring back to the sanctuary to make yourself ever stronger.

Like Demon’s / Dark Souls or Bloodborne, Salt and Sanctuary’s name says a lot about the title. Knowing your quest and the way in order to accomplish it, you set out from that first sanctuary in search of a way forward. Designed as a Metroidvania, there’s more than one way to get around the island though several locations will be barred until you can either find the key or the powers required in order to move forward. Don’t be surprised through if you find yourself up against a boss with no warning as you didn’t come in the originally intended way. It happens. More than I like to admit as I got lost and still don’t know the real ways into several locations. I found work around that while harder, do the job.

Visually, the direction that was taken for the adventure lends to creepy, and often unsettling, feelings as you traverse forwards. Living essentially in a world of grey with black and white very rarely allowing color to bleed through, the world is just as deadly and willing to impart dread upon you just as it would in a 3D rendered world. With the artstyle and the musical scores, there’s still plenty to worry about as while something cannot exactly “sneak up” on you, it can come from underneath or simply hide in the shadows for you to pass as it descends in order to eat your face off. I hate the “Alien” based xenomorphs. 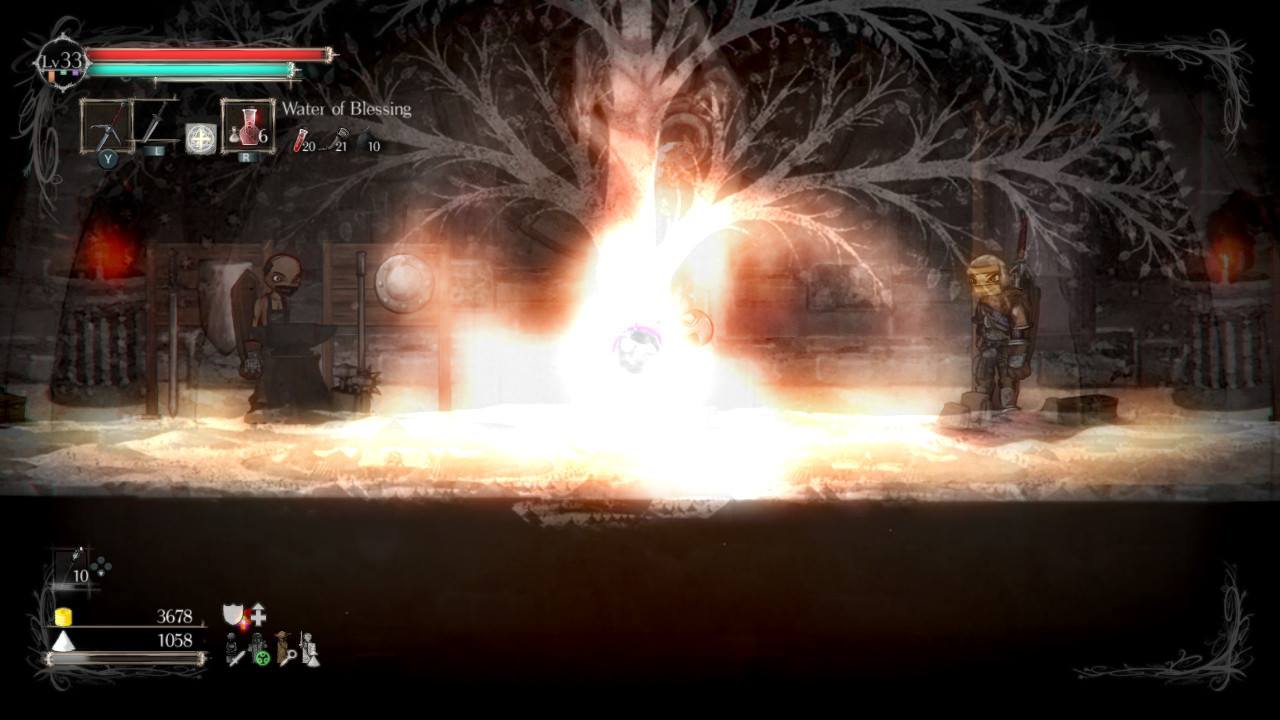 On your adventure you’ll find plenty of ways to die, plenty of beings willing to kill you, and then plenty of bosses that actually will the first time around as you fumble trying to figure out how to take them on. What is a little bit interesting is that while you have your equipment limit for how much you can carry while still being agile, you have two weapon loadouts in which you can decide there if it’ll be a one-handed or a two-handed affair. This isn’t something that can be swapped on the go but instead has to be set up from inside the menu. This allows you to either wield a sword and a shield in one set and a two-handed weapon in another, or to simply hold your one-handed weapon in two hands for more damage. Adding to the complexity are charms that can add status effects like poison or increase damage / attack speed.

When it comes to your gear you won’t be able to simply upgrade the hell out of it because you have a crazy amount of salt. Instead, like all good things in life, you have to earn the right to upgrade them with materials that can sometimes be a bit harder to come by especially if you’ve made it further along the island. Backtracking will often be involved especially when upgrading a new piece of gear that you’ve obtained from it’s basic level into something brand new and powerful like a greatsword that acts as a pair of scissors. Yes you read that right and it’s my favorite weapon in the entire game. 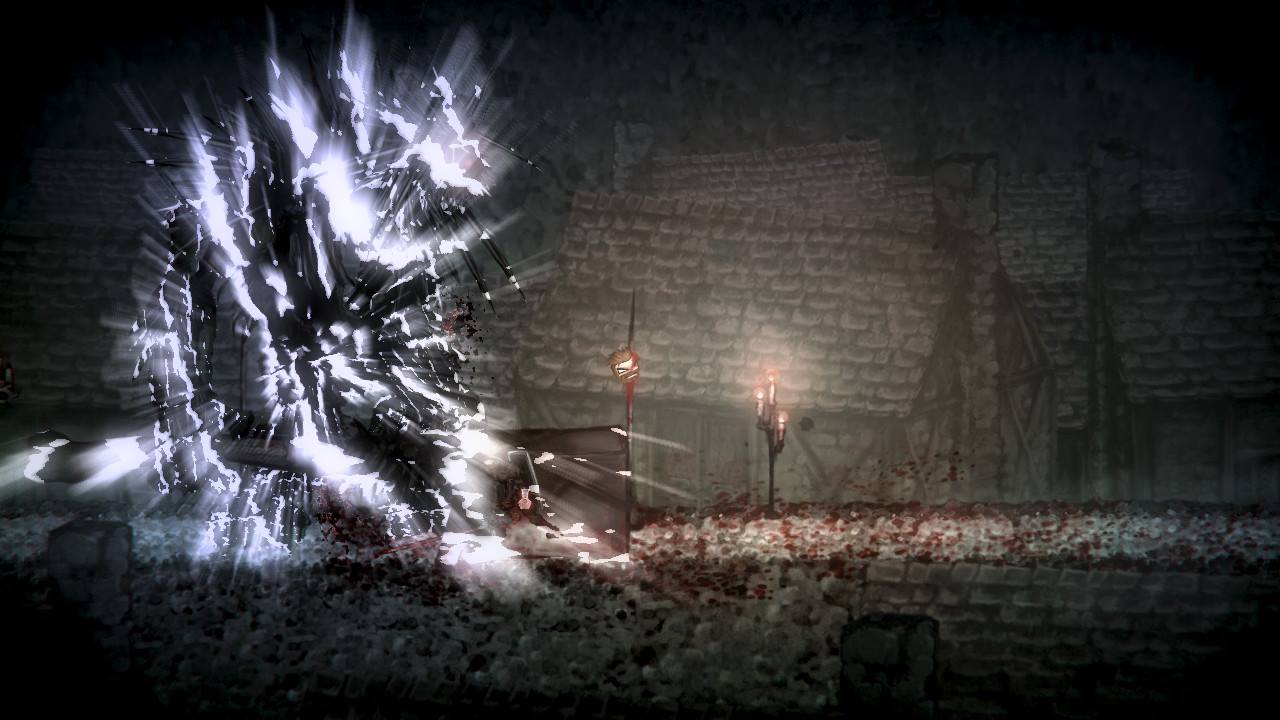 The overall length of the adventure is maybe a good ten to twelve hours IF, and I say IF, you know what you’re doing. Otherwise the first time through could take upwards of a good twenty or thirty trying to find everything and everyone as there are plenty of NPCs with stories to tell and paths to follow if you want to see them through to the end. Missing some of these opportunities will often make you have to go through a new game+ in order to restart and figure out where you went wrong the first time. Having gone through it more than once by this point and again on the Switch, I highly recommend it as speaking with these NPCs is what gives the world its true substance and making it more than an already epic grayscaled 2D adventure.

Salt and Sanctuary for the Switch is a great port. Everything is smooth and it works just as I had expected it to be. There are no slowdowns, the graphics look just as good, the audio is just as chilling as ever, and the adventure is still an awesome one to be had. If you haven’t already had the chance to dive into this comber, and woeful tale, you should. It’s worth it. 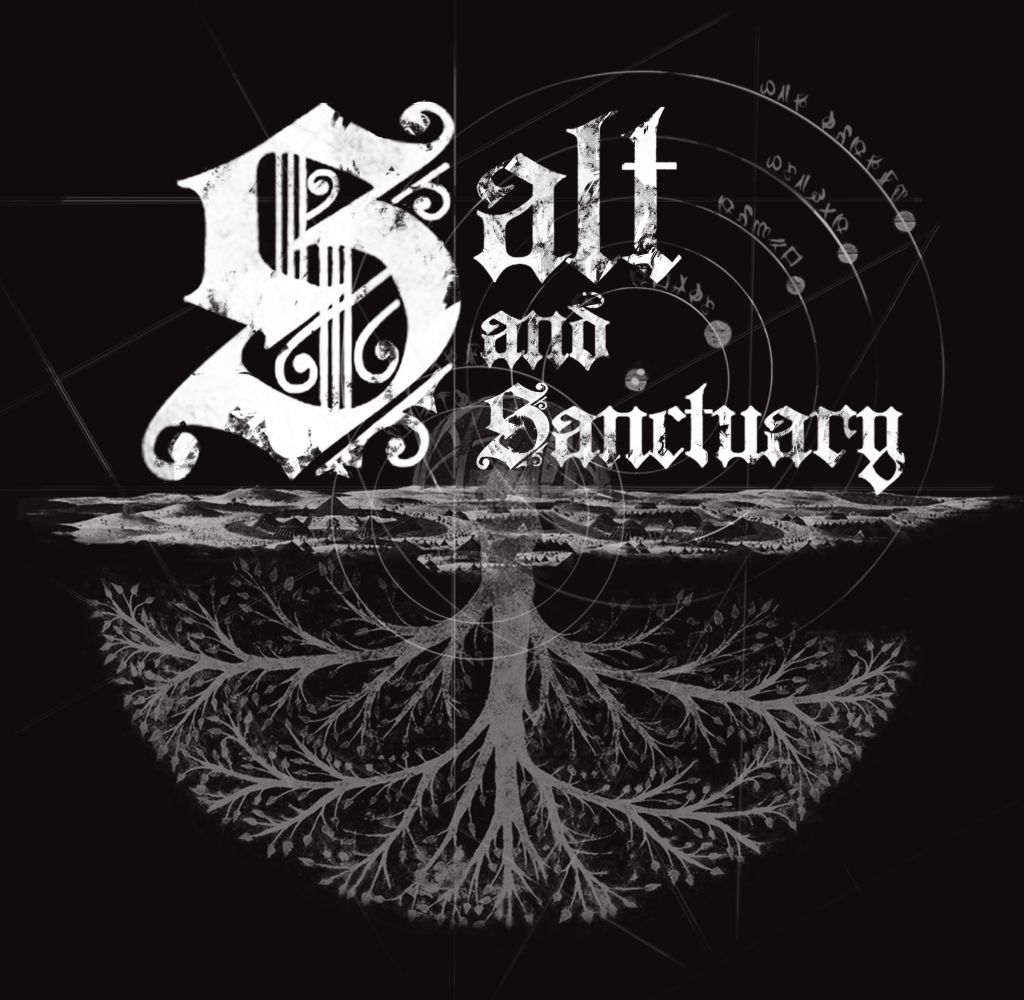 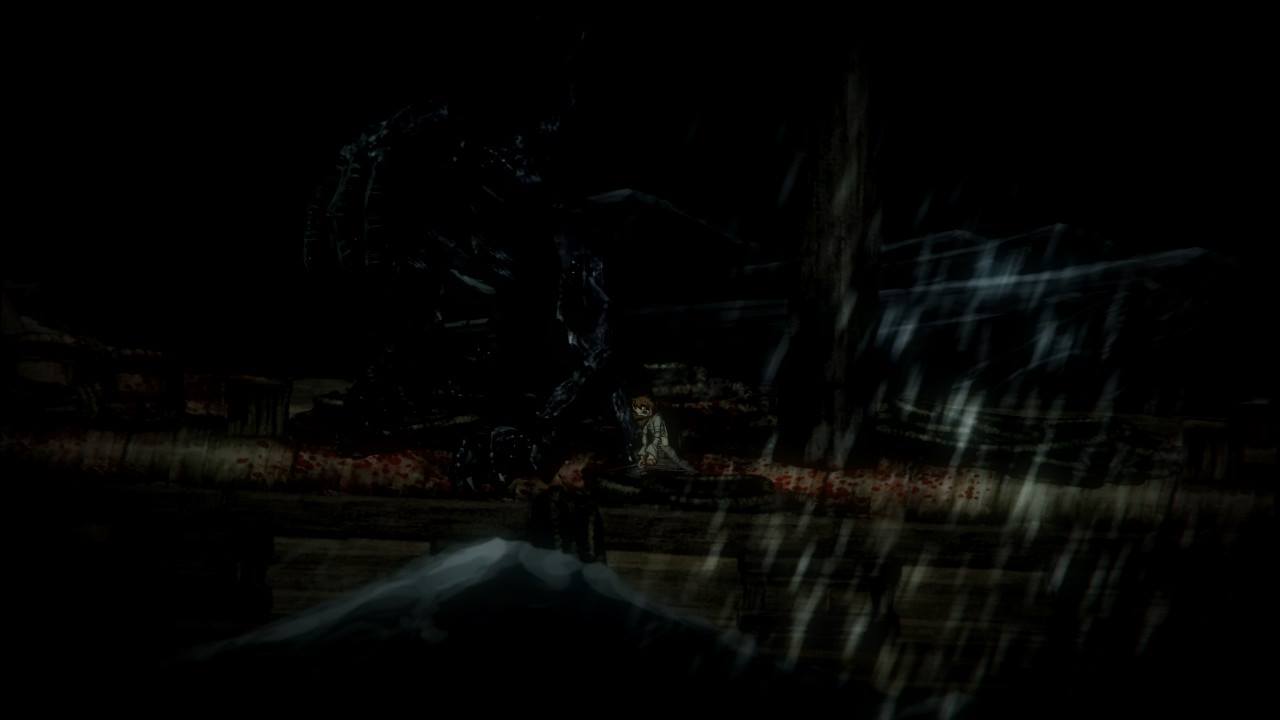 It was a dark and stormy night but the first boss went down!