You are reading
This War of Mine: Complete Edition – Switch Review

Though the core game has been out on other platforms for some time, This War of Mine: Complete Edition is still a welcome addition to my Nintendo Switch collection. It is though-provoking in a way that not a lot of games manages to take a lot of chances that pay off for more frequently than not.

When Jeff had a chance to cover This War of Mine a few years ago on PC when it first released, he came away thoroughly impressed with this indie title. This has been one of those games I kept meaning to play over the last few years, but just never really got around to until this release. I probably did myself something of a disservice by waiting so long to try it out, because This War of Mine: Complete Edition is a harrowing, gripping game that I had a difficult time putting down.

With a title like this, one could be forgiven for thinking that they were going to be playing a game about a soldier looking to kill all of the bad guys. That is usually how war gets portrayed in most video games, and with good reason. They provide plenty of action and oftentimes, very clear cut moral lines that make it easy to jump into the starring role. However, This War of Mine is a completely different type of game that doesn’t throw you into the role of some 80’s action hero, but instead puts you in charge of civilians doing their best to survive a fictional war. Instead of running around corners blasting Nazis in Wolfenstein, this is a strategy simulation that sees you managing resources and morale. Sometimes the decisions you make are easy, because you are being assailed by those with ill intent. However, there are other times where you are tasked with keeping your ragtag group alive, and the only way to do that is to take resources from others. It raises the eternal moral question: is it better to do the right thing for the wrong reasons, or to do the wrong thing for the right reasons? Personally, I tend to gravitate towards these types of dark, gritty tales. When The Last of Us came out years ago, I found the narrative incredibly compelling, and while This War of Mine: Complete Edition does not compare in terms of production or even telling a tight narrative, a lot of similar themes surface because at the end of the day you are tasked with finding a way to survive in a world that seems hellbent on killing those you hold dear.

From a gameplay perspective, there are a lot of roguelike elements at play here with the randomized starting characters and locations. That being said, you still have the same basic objectives regardless of your ragtag team’s talents: you are attempting to survive the war that is taking place. That generally takes about a month, and the way you do so comes down to making decisions. There are the obvious needs, such as food and heat, but also the ability to defend yourself from looters and keeping morale up as well. There are numerous things to juggle, and This War of Mine is built knowing that you can’t keep all of those balls in the air at once. Sometimes they will hit the ground and there will be consequences.

The gameplay is broken up into two halves. During the day your characters stay to their abode, leaving you to wait for time to pass while doing what little you can to manage the living conditions. Nighttime provides the most actual gameplay and also the greatest opportunity for things to go wrong. Characters have different skills, and the trick is in understanding how to get the most out of them as you attempt to find food, medicine, building supplies and more while keeping your intrepid explorer out of harm’s way to the best of your ability. 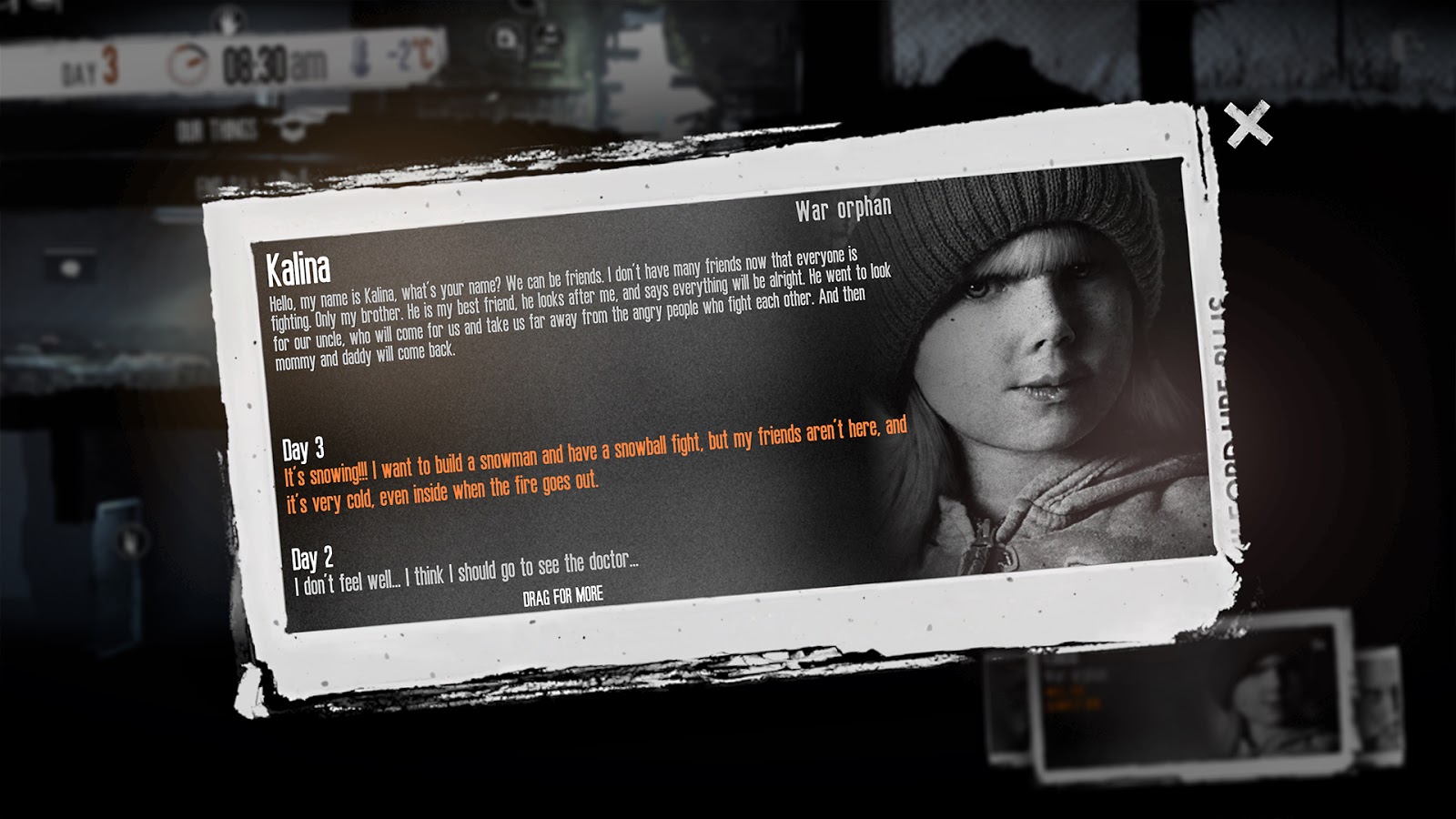 This is basically the same game that has been out for years now, just repackaged on a different system with the previously released DLC stories either included or soon to come free. From a presentation standpoint, this is clearly an indie game, so it lacks AAA production values and polish. Sometimes character interactions are just a bit off visually, but the overall style, subtle use of music and appropriate ambient sound effects certainly do the job well. This is a grim, gritty portrayal of war where people are just trying to make the best out of a very bleak situation. The gameplay pacing can be a little uneven, but the development team clearly had a vision they wanted to share and tonally they absolutely nailed it. This War of Mine: Complete Edition is a unique experience that rises well above some of the limitations of its indie development and manages to deliver an affecting, emotional gameplay experience.