You are reading
Guacamelee! 2 – Switch Review

Drinkbox Studios know how to make a game. Having originally blown me away with the first, Juan is back again for more Mexican fantasy Metroidvania nonsense as he re-takes up the magical Luchador mask in order to save the Mexiverse. Having been seven years since his epic victory though, Juan has gotten chubby, become a father of two, and will need a bit of work in order to get him back up to fighting strength. But first? He’s got to die and go to the land of the dead!

The original Guacamelee was solid. Starting off a bit flabby around the waist as Juan hasn’t really moved in almost a decade, it doesn’t take long for Guacamelee! 2 to show off its pecks as Jaun works off that fat to once again become his previously solid self. Having taken this direction made for a much better storytelling approach than it would otherwise have with some random loss of powers. Juan got older. Juan didn’t need to fight anymore. Jaun needs to get back into shape. This also allowed for DrinkBox to use the same man, the same location and the same people with it making sense other than trying to have to invent someone new to take the reins of the adventure. 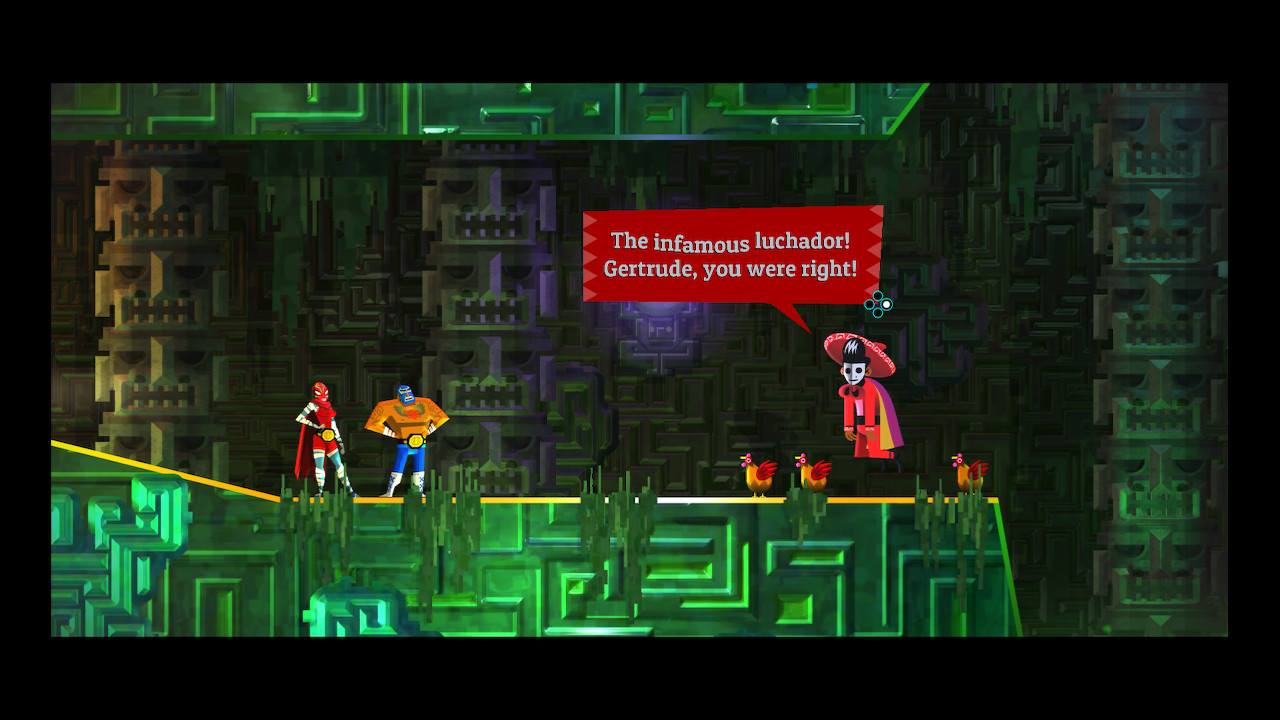 The driving force this time around is a bit different however. Juan isn’t fighting to save the woman he loves from being sacrificed. Instead, he’s fighting to save EVERYONE. The love of his life, his kids, his neighbours and those versions of them that live throughout the Mexiverse as your Juan is the last Juan alive. No pressure right? With guidance from multiple different sages coming from multiple different universes to find the ultimate guacamole recipe, what could go wrong right?

There’s no slow start to Guacamelee! 2 which is something that I appreciated. While showing you the ropes “slowly” over the period of a dungeon or three, it doesn’t exactly take it easy on you in the meantime while needing to use what you have in order to break in some heads. Now while it may not take it easy on you, never is it unfair. Through Jaun you always have the tools required to combat your foes and make it through the environments over to your goal. If you can’t make it to where you want? That’s because you don’t have the powers meaning that you’ll have to find another way for the current moment in time but remember where you were because you’ll be back and you’ll make it through later. 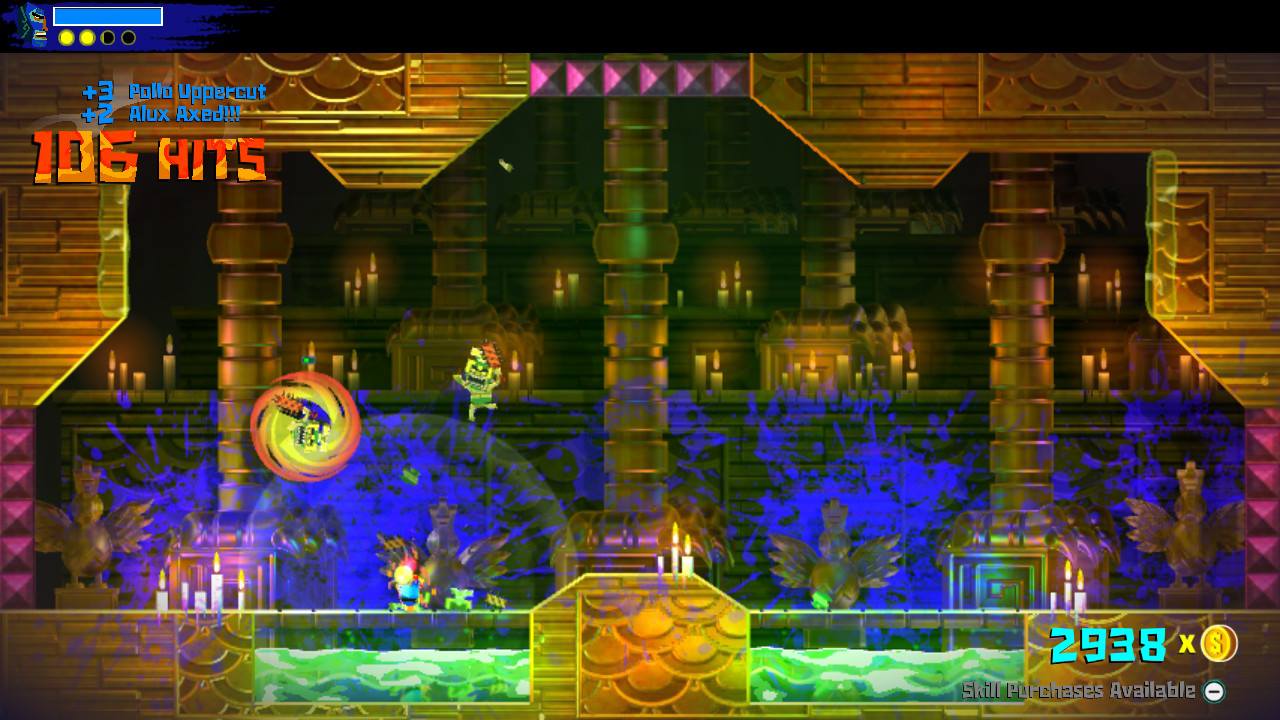 Juan powers are, if nothing else, flashy. In order to keep track of what does what however, each power is color coded to the environment so you’ll know exactly what you’ll need at all times. Dash punching forward is blue, uppercutting is red, floor slamming is green and headbutting is yellow. Add in your “chicken” powers in which your polo shot is purple and you’ll easily be able to keep track of what moves you need for what obstacles stand in your way.

With all of these powers to get you through the lands of both the living and the dead though, you’ll also get to use these powers to knock out your foes. So basically the fun part! That said however, Jaun can’t just repeatedly use and abuse these powers. What he can do however is to chain them all together for some massive amounts of damage which will also augment the combo counter faster which in turn give you more money for the defeat of your foes. What does money do? Think of it as experience that you use to pay off the various people willing to teach you new moves or abilities for the right price! 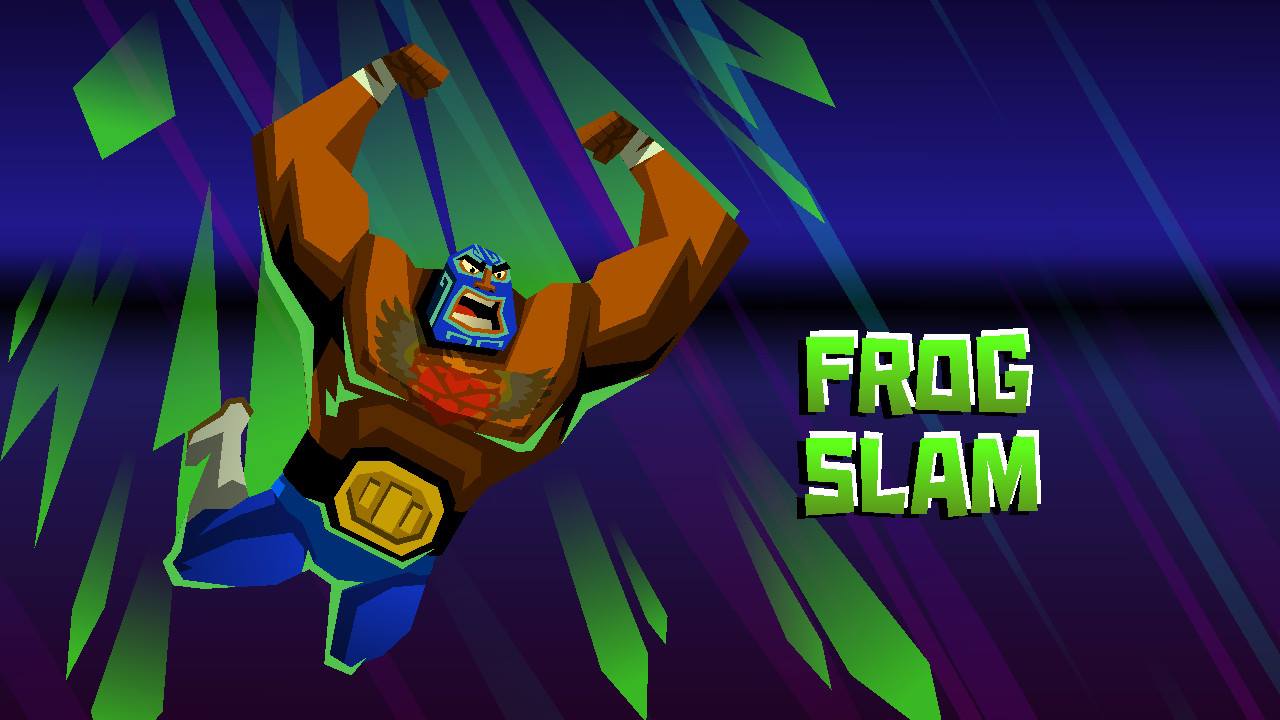 Fighting, exploration and the witty dialog all come together once again for another brilliant adventure. The best part? You don’t need to go at it alone. After the beginning segment you are given the option to add up to three others in order to join you for some mayhem right there on your very own couch! Why go outside when you and your friends can hang out where it’s safe inside.

Overall Guacamelee! 2 is a fantastic sequel to the first. Just by playing through you can see the love that DrinkBox Games have mixed into this wonderful bowl of avocado filled amazingness as you search for the keys to unlock the guac recipe that has no rival. With the amazing artstyle back once again, the epic music tracks, flying through the air as a luchadorian chicken and simply kicking the crap out of things as you search both high and low for where to go? This is one bowl that you’ll want to dip your controllers into!