Achtung! Cthulhu Tactics is a wonderful semi turn-based squad-focused strategy title focusing deeply on tactical setup and execution. The unfortunate thing about this alternative take on World War II is that it will be inevitably compared to the revamped XCOM franchise and that does Achtung! Cthulhu Tactics a bit of a disservice because while similar, it still feels and behaves very, very differently. There are certainly similarities, and the inspiration of the venerable XCOM franchise is easily spotted in Achtung!, it is still very much its own brand of strategy gaming … and though wonderful at time, still has a bit of a way to go to fully mature into a household brand.

Alternative-history games have been done countless times and one of the most notorious eras would be the horrific years between the early 1930’s to mid/late 1940’s commonly referred to as “World War II.” From zombie Nazis to superpowered Nazis, to generally just the fight against Nazis in any form or faction; it has literally all been done before. Almost. Achtung! Cthulhu Tactics is something fresh and new in the alternative WWII history genre; they add XCOM-style tactical gameplay and mix it up with a little Lovecraftian devilry … the notorious Cthulhu. The refreshing take on World War II though, wears off its novelty with a bit of repetitive gameplay; each mission (main story of side mission) feels the same with only the end objective being slightly different from others. 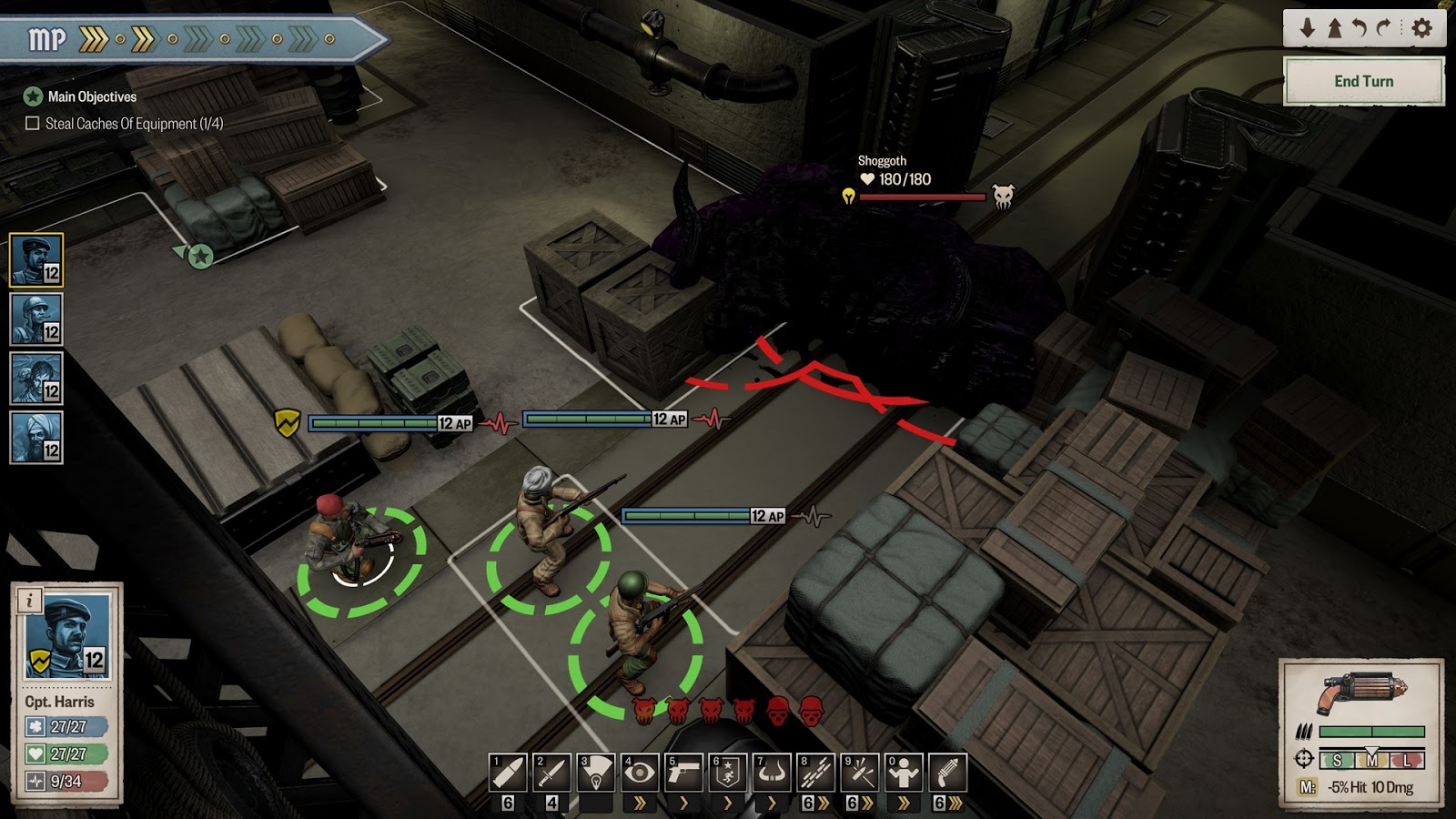 Though a bit shallow, I do have to say that the game runs wonderfully on Xbox One; rarely do multi-platform releases run so smoothly on all platforms but Achtung! Seems to have taken care to ensure each platform looks gorgeous and runs smoothly. This is doubly-impressive given what I believe is the single best implementation of “fog of war.” FoW in games has been around since the dawn of time it seems; I have fond memories of WarCraft: Orcs & Humans, WarCraft II: Tides of Darkness, and Command & Conquer campaigns where I would, in my youth and immaturity, simply find the cheat code to remove the FoW because I wanted to see what was going on.

That practice of mine has since gone by the wayside unless I am replaying a campaign for the umpteenth time and I simply want to see how the AI reacts to me (for science, you know?), but with Achtung! I could watch replay after replay of enemies being vaguely represented in the “lite” fog of war, as darkened, misshapen blurbs until you get into a closer sight radius, is wonderful. As you move free-form through the linear maps, until you come into combat where it then goes more traditionally turn-based, the black FoW disperses to this shallow “lite” fog of war that is simply gorgeous. If an enemy takes an action while in that fog, their model comes into a clearer view, but then goes back to this darkened shade. It is great to behold. 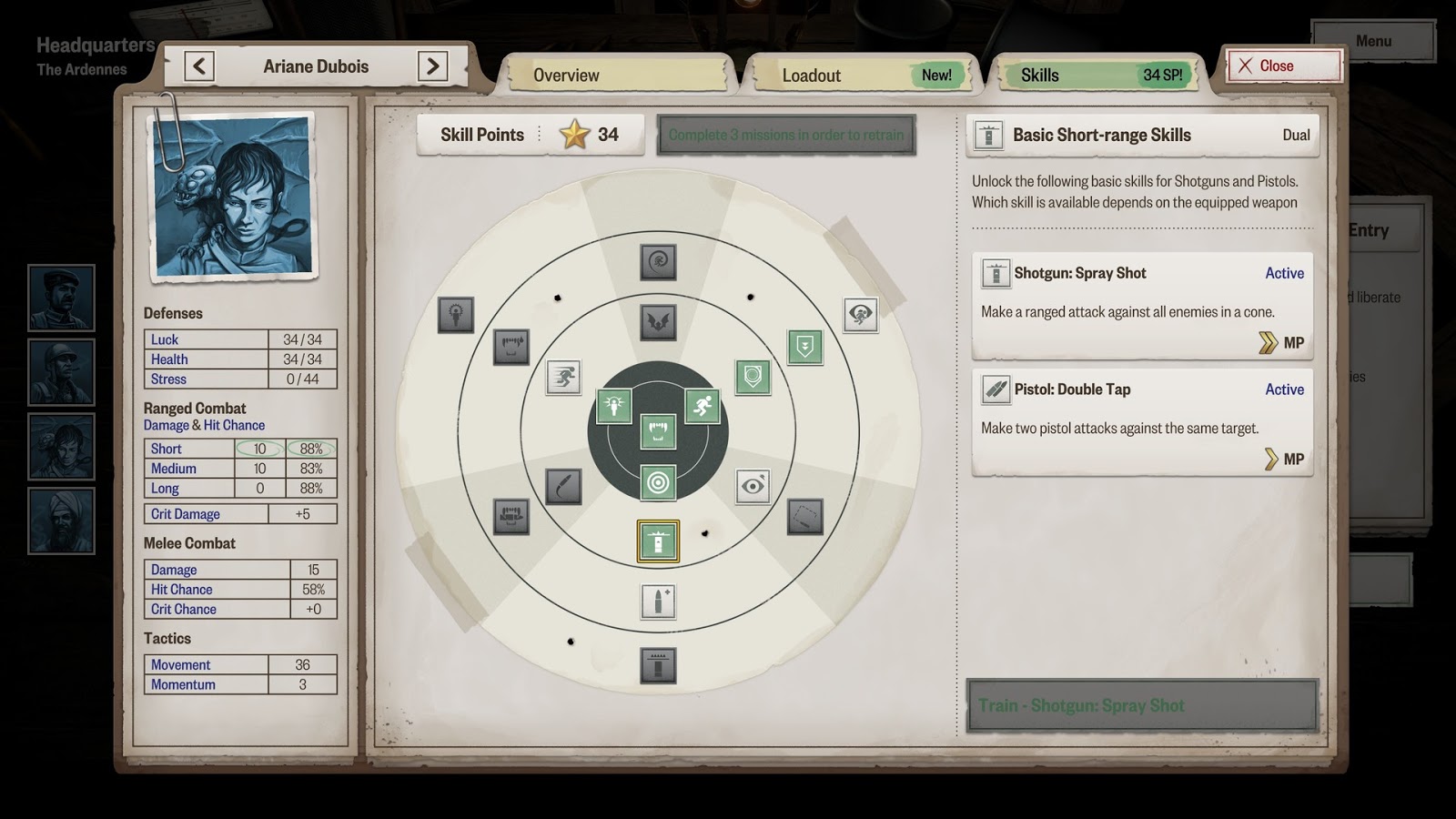 Each mission briefing/setup honestly feels like it could be a more serious entry into the wonderful Inglorious Basterds film, with a rugged table, a map that has objective pins into it, and WWII-era accoutrements throughout the screen. I love looking at it, even if it is a bit bland after you have seen it a dozen times, but it serves its purpose and allows you to choose the mission, kit out your team, then drop into a fairly straightforward map that has you running from cover-to-cover with the hopes of destroying any resistance while keeping your team alive. The first half-dozen missions are exciting, but as you progress it just feels … the same. Run to cover, set up overwatch, hope to the heavens that you hit whatever nastiness is coming your way, then move to the next rock formation or sandbag setup. But hey, at least your soldiers have a far better hit percentage / possibility than those in XCOM …

As you progress through Achtung! Cthulhu Tactics's Cthulhu-riddled campaign the repetitive and generally shallow nature of the gameplay rears its ugly head early, however it is still an enjoyable romp through a new take on an alternative World War II outcome. It helps that it runs like silky-smooth butter and has some wonderful models in it, though it does feel a little too linear in its encounters and does not scale well with different difficulty settings. Achtung! Cthulhu Tactics is, I hope, the start of an interesting genre that blends relatively free-form movement until turn-based tactical combat rears its bestial head. A perfect title for those that are itching something different than their three hundredth playthrough of XCOM 2, Achtung! Cthulhu Tactics is a great way to pass the long days of your holiday vacation.