You are reading
Kenshi – PC Review

I have struggled to truly define what Kenshi is; based on the tags and general definition by the good folks at Lo-Fi Games, it is a “free-roaming squad based RPG” and while that is absolutely true, it is so much more. Set in a massive open world, Kenshi is more than a simple open world, it is a pure sandbox adventure where prison, starvation, and war are around every corner. You do not need to partake in glorious battle or skulk through the night thieving your way to riches, oh no … you can be an adventure, exploring new areas and peoples, you can be a trader, hawking wares to settlements far and wide, or you can take the route I most commonly did, and simply work to crush anyone that stood in my way of world domination … Kenshi is huge, complex, and though extraordinarily difficult at times, a wonderful way to pass the long hours of a weekend.

Kenshi is almost exclusively about trial and error, where “error” is the name of the game. You will, without a doubt, be crushed by a band of roving slavers, bandits, or one of the opposing factions. Failing that, you will most certainly end up in prison on account of the fact you will most certainly screw up and steal or attack someone you should not have. If you have managed to avoid those fates in the early days, then in the early days, you will probably be eaten by the roaming packs of wild dog-things (seriously, those things suck). 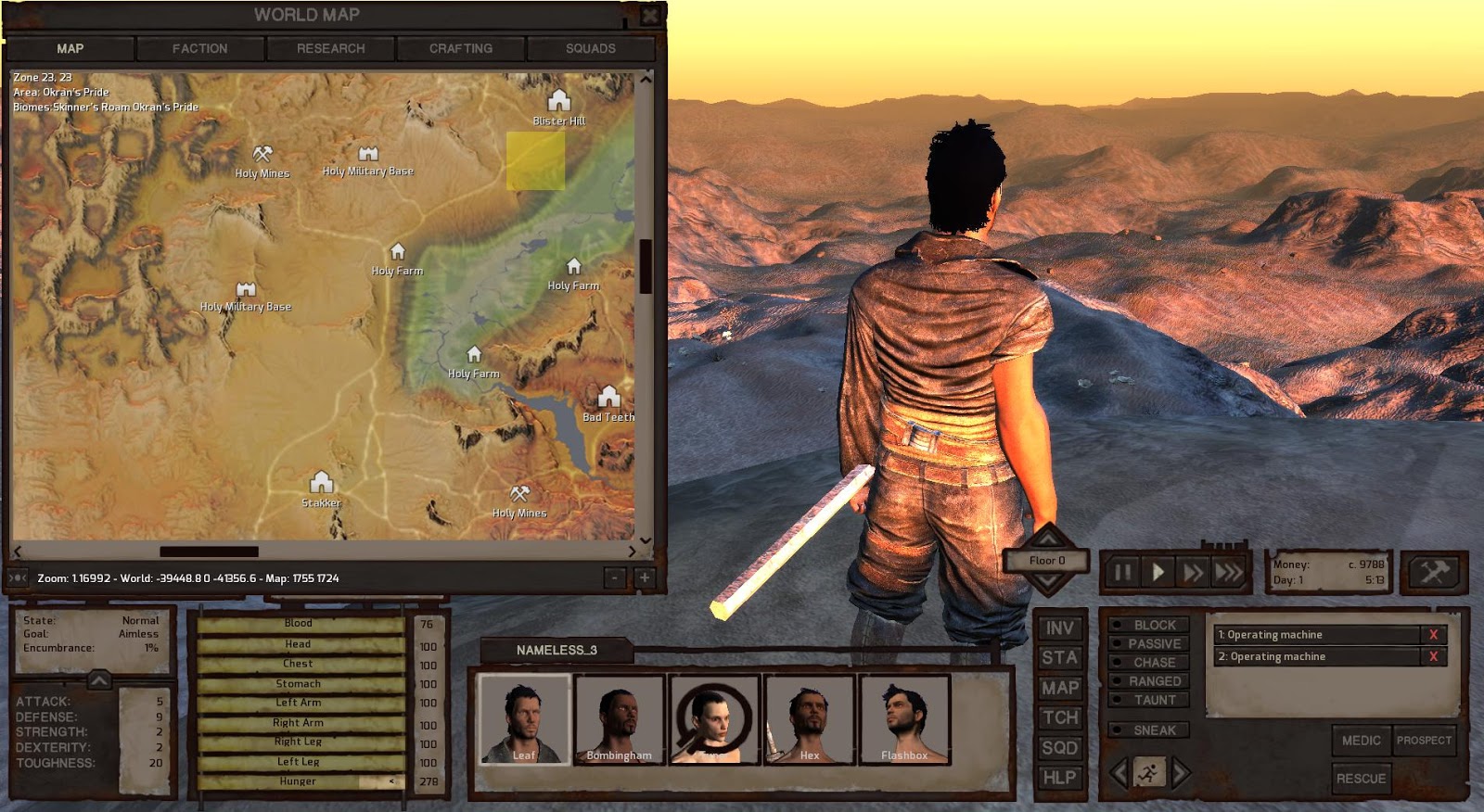 Character setup is huge and intricate with a pile of races to choose, from the bug-like weird-o’s, to spikey tentacle-faced oddities, to standard humans. Each race has their pros and cons, but for pure aesthetics, I ran with humans as they are the most neutral throughout Kenshi. Fun fact about the character creator … you can make some truly horrific looking and malformed characters. After spending a solid thirty minutes deciding your race, name, and other attributes, you will pop right into the game.

Kenshi is a huge game; not necessarily in the scale of the world, though that is impressive, but in the idea that every attribute or skill available in game, such as athletics, strength, stamina, sneaking, crafting, etc. are leveled up by actually doing the desired skill. One thing I strongly recommend when you first load in, is to simply run. Building your athletics skill will be crucial to your survival in the hours to come… While you are working on building up your skills you will also need to dig deep into your Diablo 1 inventory management skills as Kenshi’s inventory is intentionally small. The higher your strength then the more that you can carry, but I swear the UI for your backpack could be damn-near identical to Diablo 1 (or really, even just the Diablo trilogy) and you will be spending a significant amount of time swapping items around in your party, assuming you survive any battles in the early hours … It may even be a better idea, to start, to simply run around and follow the patrolling bands of Holy Empire groups (assuming you did not choose The Hive as your race, since they start with a bounty on them) and simply scavenge (if you can) the bodies of the enemies that they drop. 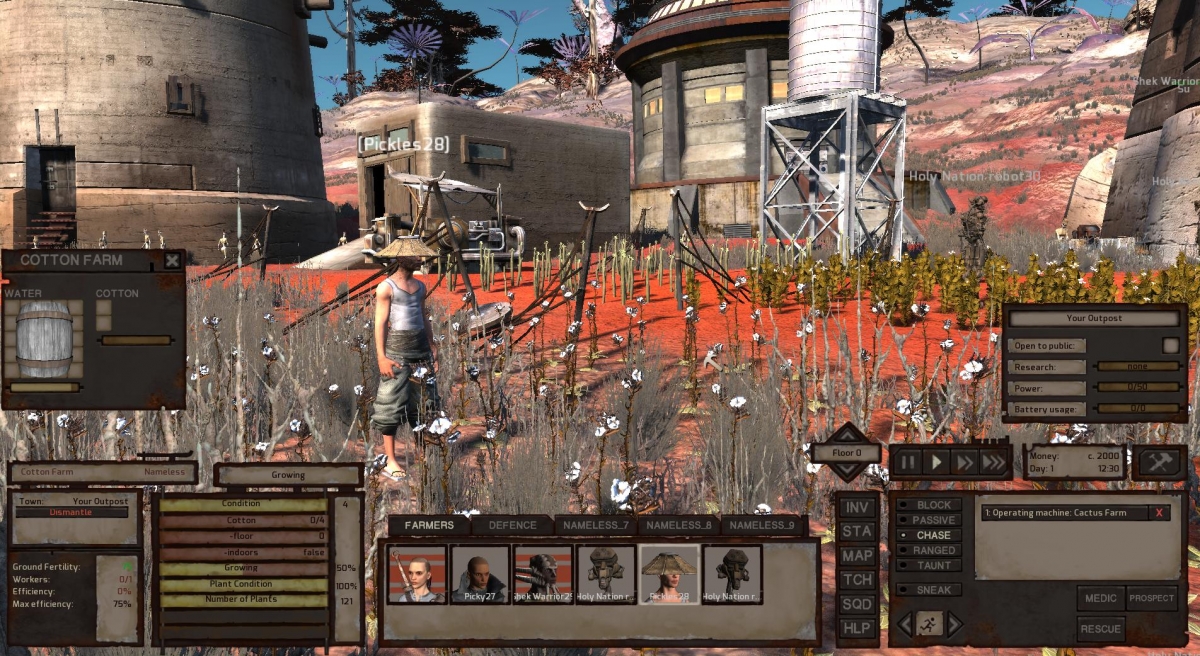 It is not all doom and gloom though and if you play your cards right by setting out and immediately setting up a base in fertile land, then you can have a solid location to set out from and a place to return to when you are injured / loaded up on inventory. However where gameplay itself might be an exciting and admittedly, daunting, experience, it does often take a back seat to some serious issues. Kenshi, though in full release (and being diligently updated) is in rough shape. Save game bugs, regular crashing, horrific optimization (my i7 w/ 16GB RAM, M2.e drive, and a 1060 GTX would run like absolute and utter garbage at times), and some mind-boggling pop-in (whole settlements would suddenly just … appear).

In truth I am a bit surprised that Kenshi was fully released; another month or two in Early Access would have been good for it, no matter the fact it has spent a number of months in EA, in its current state it is hard to justify a full release. Honestly it is the only thing holding the game back, and that is a dirty shame as it could be an utterly fantastic sandbox title. Having to download mods just to run the game properly bring back vile tastes of The Elder Scrolls V: Skyrim, Dark Souls: Prepare to Die Edition, and the Grand Theft Auto franchise as it often feels like the developers just figure that someone else will fix it (that is NOT the case here as Lo-Fi games have been aggressively attacking these issues as they come in, but the feeling is there and it might, unfortunately, turn people away).

Kenshi is a unique blend of pure squad-based RPG leveling set in a sandbox world where your goal is to first survive then thrive and it is an extremely difficult title. Not only is it difficult it is also extraordinarily complex yet with an dated but useful user interface that leaves no vital information too far out of grasp, with graphics that are both complex and at times, stunning while reminiscent of mid-late 2000's isometric viewpoint RPG titles (I believe it has graphics comparable to those found in the Dungeon Siege franchise) yet do not let the graphics fool you; Kenshi is deep and highly complex and at times feels like a management / sim game with RPG aspects built into it. This is a good thing and the brilliant mix of various game genres has me eyeballing their update notes as I am itching to get back in there … even if it means my squad ends up eaten by cannibals.