You are reading
Tales of Vesperia: Definitive Edition – XB1 Review

Tales of Vesperia: Definitive Edition is the hotly awaited remaster of 2009’s utterly fantastic Xbox 360 exclusive Tales of Vesperia. While the original was released in other parts of the world for numerous platforms, it was, in the West, exclusive to the Xbox 360, for which is set an unattainable bar for JRPGs on that system. Ten years later and Bandai Namco decided to remaster it, and much to the delight of its fans, released it across all platforms. Now a new generation of consoles and new gamers can reexperience the excellence of Yuri, Repede, Estelle, and gang, as they live the life of adventurers, monster hunters, thief-catchers, and more.

The real question though, is does it still live up to today’s standards, and are the changes in the Definitive Edition really all that they are made out to be? Those are incredibly difficult questions to answer and while I thoroughly enjoyed another run, I can see now, in a world post-The Witcher III, Dark Souls III, Final Fantasy XV, Ni No Kuni II, and Persona 5, that Tales of Vesperia does not quite stand the test of time… Though it is still an excellent game; just not quite the perfect ten It might have been in 2009.

While I will likely be burned at the stake for my opinions on Tales of Vesperia as the fanbase is utterly crazed and can be hostile towards anyone looking to say any sort of criticism against their beloved Vesperia. While Tales of Vesperia might have been an excellent entry into the JRPG genre in 2009, ten years is a long time and growth in gamer appetite as well as trends within the genre itself have taken wild leaps in progress. Though the story is enjoyable, it also feels beyond-cliché, even boring at times, and is predictable from start to finish (even to those that may not have played Vesperia).

Growth in the Tales franchise itself also contribute to this somewhat backwards feel; if you did not have a Xbox 360 growing up, but did have a PlayStation 3, then you would have missed out on Vesperia’s launch, but you would have otherwise gotten, were you a fan, both Tales of Symphonia games, both Tales of Xillia, and my personal favorite, Tales of Graces F; additionally, if you have a PlayStation 4 (but still no Xbox 360), then you might have also picked up Tales of Zestiria and Tales of Berseria, plus there was Tales of Hearts R on the Vita!

That is eight Tales of games, six of which are post-original Vesperia’s launch. A lot can happen in franchise evolution in that time (and it does). In terms of story maturity, complexity, and overall tone, Tales of Vesperia is the weakest link when compared to modern Tales titles. This leaves gamers that have played the PlayStation 3 and PlayStation 4 Tales games (like me) feeling a bit mystified and, at times bored, with the story. After all, we had seen all of these things already… 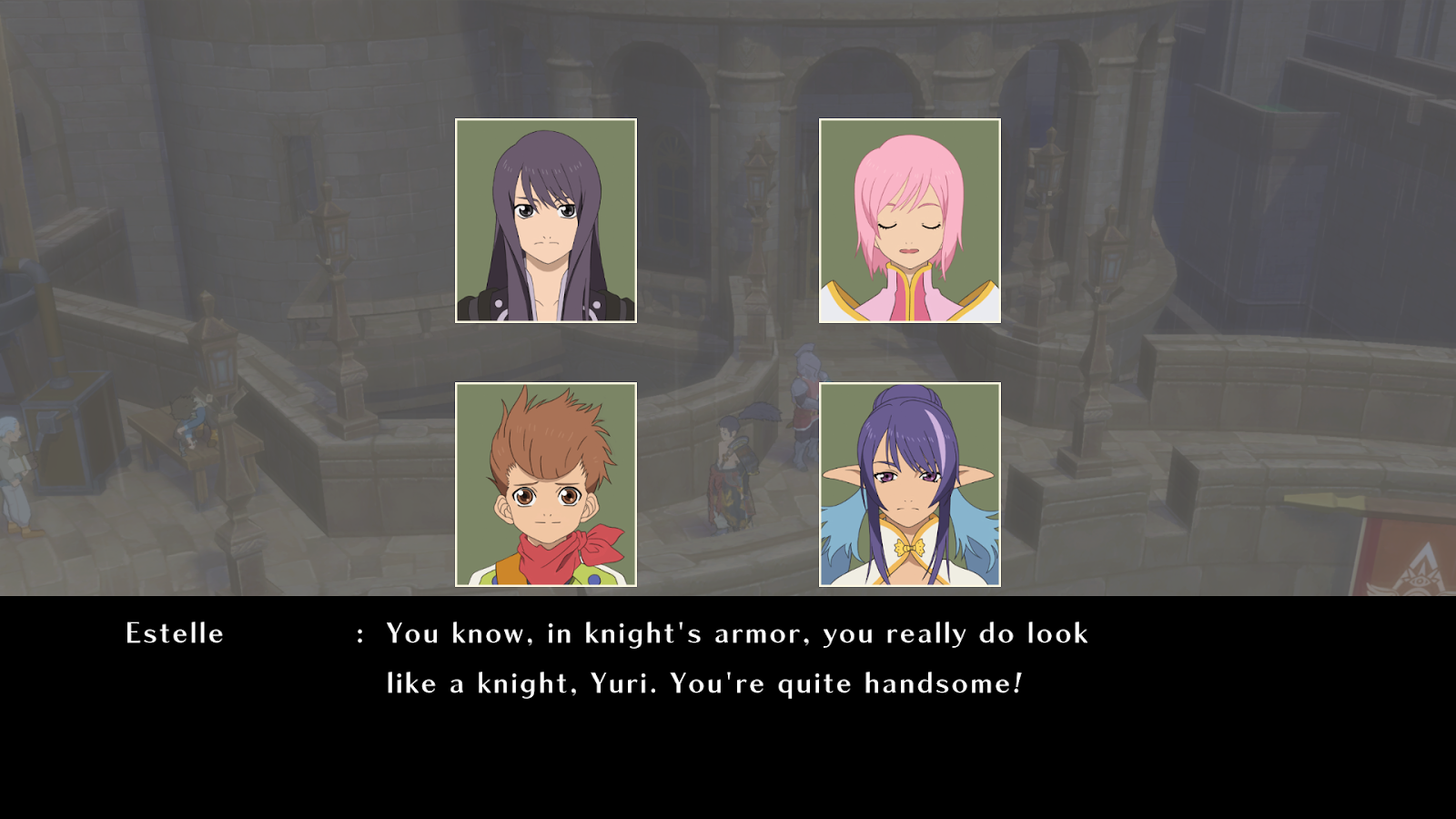 What that means though, is that Vesperia is one of the founding titles for many of the aspects, both in gameplay and in story, for the Tales franchise. Prior to Vesperia’s release the Tales franchise, for the most part, was relatively juvenile with regard to its story, and it relied on its unique realtime-combat system to gain headway in a genre literally dominated by Square Enix’s flagship Final Fantasy franchise. Post-original Vesperia’s launch though, focus on meaningful relationships between characters (enriched via the Skit feature, which is awesome) became a staple in the franchise, tied to the wonderful Artes system and its action-oriented combat, set forth a winning formula.

Truthfully, Tales of Vesperia: Definitive Edition feels a bit bizarre now; the story is, in retrospect, quite immature, though there are a few jaw-dropping moments, but the overall tone and direction tend to be relatively face-palm inducing. However, if Tales of Vesperia: Definitive Edition is your first foray into the Tales franchise, then it will be a wonderful journey of growth and acceptance.

This is where the Tales franchise sets itself apart from the majority of JRPGs out there. Where, at the time (mid-90s), the majority of JRPG titles were still turn-based, a few franchises went by way of action-oriented gameplay. The Tales and the Star Ocean franchises being the two that deviated from the turn-based gameplay, instead focusing on the ability to move your characters while mashing buttons in a fashion not all dissimilar from traditional fighting games.

Since its early days in the mid-90’s, the Tales franchise has remained true to its action-oriented combat and it, to this day, remains a beloved aspect of the long-running franchise. With Tales of Berseria’s release, many gamers were quite critical of the combat system and how it has largely remained the same after two and a half decades; I for one love it and see it as a staple of the franchise. Tales of Vesperia: Definitive Edition, being from 2009, has no real change in its combat system, simply a remastered version is not expected to though, so I am fine with it.

I do have to say, though, that the sensitivity of the Jump direction on an analog stick is way too high. It is extremely difficult, on Xbox One, to move left or right on the battlefield as it takes naught more than a breath on the analog stick, to make Yuri or your chosen character to jump. Given that the left analog stick is sort of important for both moving and performing Artes/attacks, this is horrifically problematic. Thirty plus hours in and I simply use the left analog stick to get close to an enemy then use the right analog stick for my shortcuts; it is a workaround that limits the total number of useable Artes to only five rather than the 8-9 useable Artes. It is a huge pain in the ass. Another grievance I have is that, when starting battles, your chosen character might simply walk around the battlefield rather than run and the fix is to wildly thrash around on the left analog stick until your character decides to get a move on. Not the end of the world but definitely annoying.

That said, Tales of Vesperia: Definitive Edition is easily seen as the strong foundation with which the later titles were built on; sure, there are older games in the franchise that did the same (or similar), but Vesperia really feels like the parent title. That says a lot about a title that was released a decade ago while the franchise is nearing its 30-year mark.

Beyond the issues I found with the controls and relatively juvenile primary arc, I also want to take a moment to discuss the graphics. There are parts of Vesperia’s Definitive Edition that utterly blow my mind … Take for instance the city of Dahngrest, the home of the Guilds. The depth of field used here is mindblowing and it looks gorgeous in the remastered version. Maybe I am just aging a bit, but I do not recall the original looking this damned good… However, there are times where there is this sort of … hatching … that appears on screen that makes everything super duper fuzzy. Here is a screenshot of how gorgeous Dahngrest is: Yet this is a picture of Deidon Hold, an area near the start of the game: 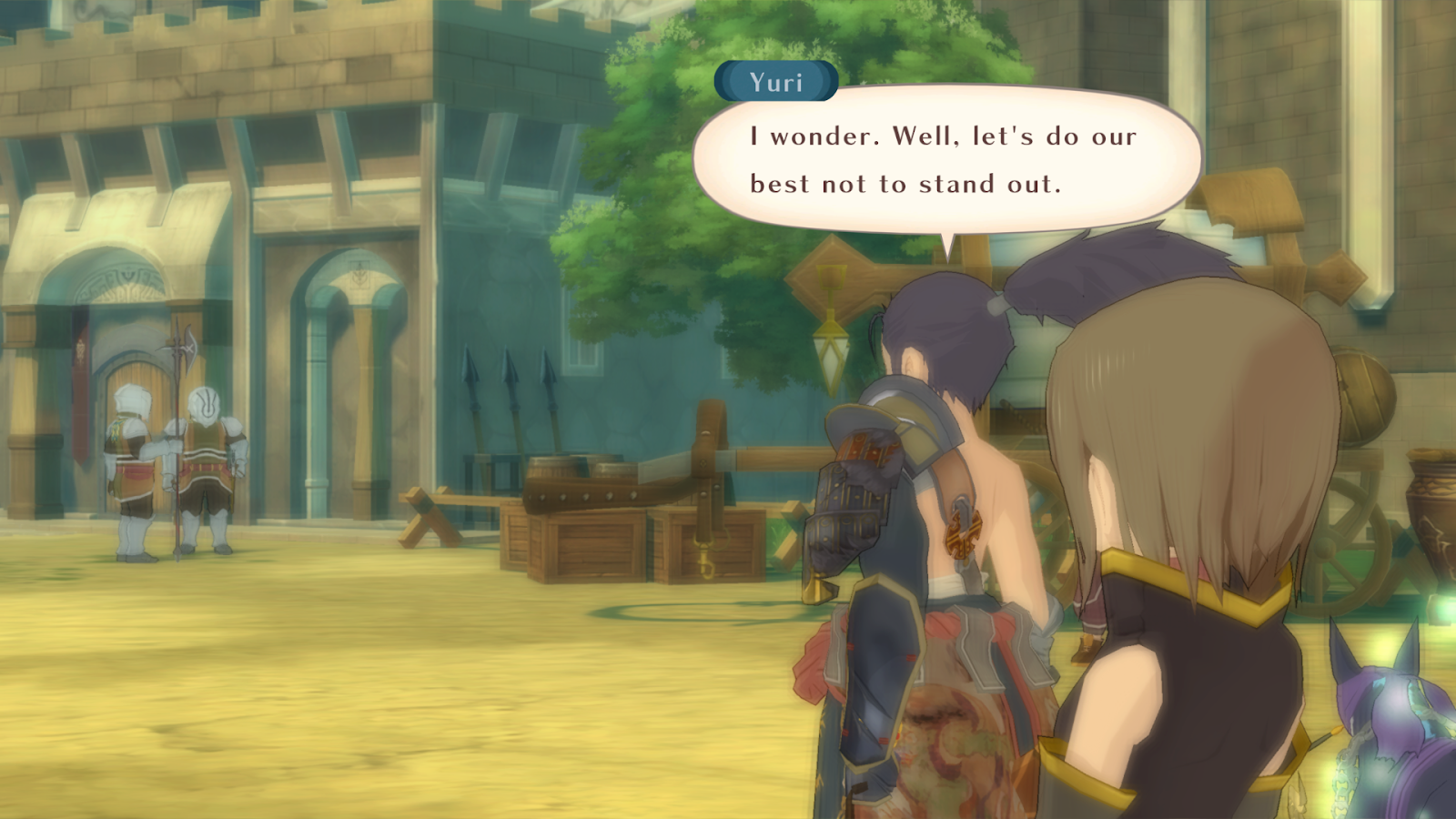 There is a clear difference in quality and it sucks because it is jarring. In the second screenshot, the one of Deidon Hold, the text is super crisp yet the entirety of the screen is hazy (and it is not simply the depth of field) with this patchwork oddness. Shots like these two are common throughout the entirety of the game; one moment stunning, the next moment looking nothing more than just a poorly attempted upscaling of the original version. It is a bit jarring.

Now many people are thrashing about Troy Baker not reprising his role as Yuri for new scenes that were added to the Definitive Edition and to be frank, they need to shut the hell up. Grant George has done a miraculous job filling in as Yuri, it is damn-near impossible to tell unless you are specifically trying to find the difference. Here is a sample between the two.

I urge you to take a few seconds to listen then try to tell me which is which. Unless you are really paying attention, it is hard to really tell. Sure, Namco Bandai should have approached Troy Baker, but they did a wonderful job with Grant George, so, to be honest, shut your traps; at least you are able to play Vesperia on modern consoles (plus with the additional content we never got in the West), and hey, if it is that much of a problem or that you are that much of a purist? Just change the voice-over to Japanese so you can hear the original seiyū and keep your mouth shut so you can listen to the glory of the original cast and an utterly amazing soundtrack.

As expected, Tales of Vesperia: Definitive Edition does not bring anything truly new to the original experience, nor to modern gaming as a whole. What it does do is bring a JRPG title that easily fits well within the annals of roleplaying masterclass games. Originally released in 2009 to the Xbox 360, where it was an exclusive here in the West, Tales of Vesperia defined excellence for the time. In 2019 though, things are slightly different; with franchises, including its own Tales franchise, making leaps and bounds within their evolutionary pathways, Tales of Vesperia: Definitive Edition is a throwback to a more straightforward era. 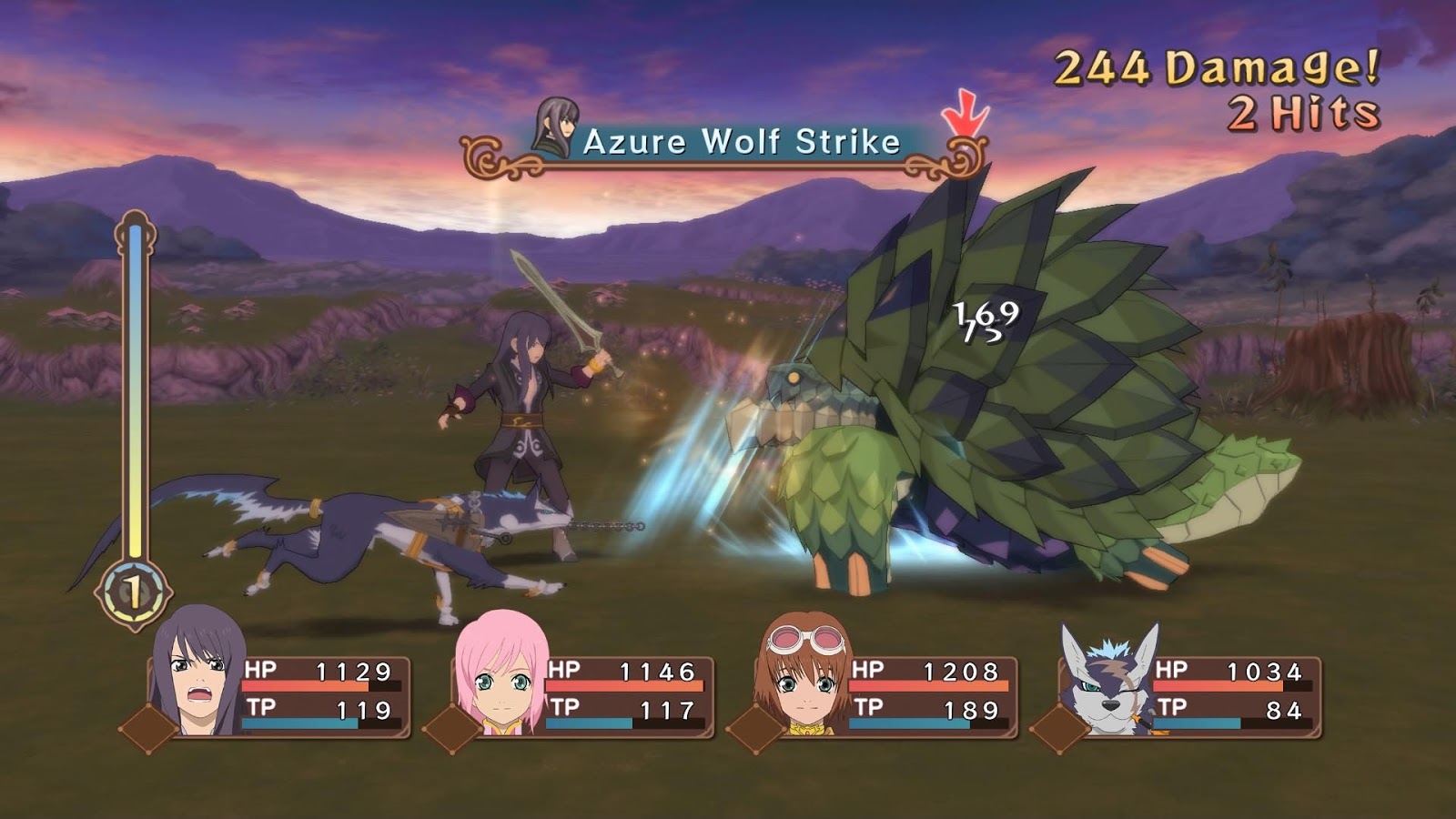