You are reading
Darksiders 3 – PS4 Review

Darksiders 3 is a title that I never thought that I would have the chance to sit down to. After THQ closed it doors years ago, this was the series that I was most disappointed that I would never get to know the end of. With Nordic however having picked up THQ’s IPs and then slowly re-releasing them before re-branding themselves as THQ Nordic and picking up where the other company left off, Darksiders 3 was put into the hands of Gunfire Games and the result? The result was a good one!

Starting back on the PS3, Darksiders: Wrath of War kicked off what could only have really been described as an “adult” version of the Legend of Zelda. Wronged and blamed for the Apocalypse, one of the four Horsemen of the Apocalypse, War, is put on trial until after one-hundred years he is let free to find out what really happened and clear his name. Darksiders 2, which was more in line with the more open world Prince of Persia, saw the Horsemen Death on his journey to clear his brother’s name. Finally moving into the third of the four chapters, Fury gives about zero of any measurement of what could happen to her brothers and will blast anyone out of her way. Acting a bit like a loose cannon, and in this case of gameplay a glass cannon, Fury is hella powerful but if she gets hit that’s pretty much it. Welcome to Bloodborne people!

Darksiders 3 picks up time wise after the imprisonment of War near the beginning of the Apocalypse. Not giving a crap about her brother or how he claims that he was wrongly imprisoned, *spoiler if you haven’t played the previous ones* he was *end spoiler*, Fury is tasked by the Charred Council to re-defeat and re-capture the seven sins that have escaped their custody and are now lose in the human world. Setting off with a purpose as it sounds so much better than sitting around bored with her horse even if it is a suicide mission as it once took all four to pull it off, it doesn’t take long for things to go sideways. 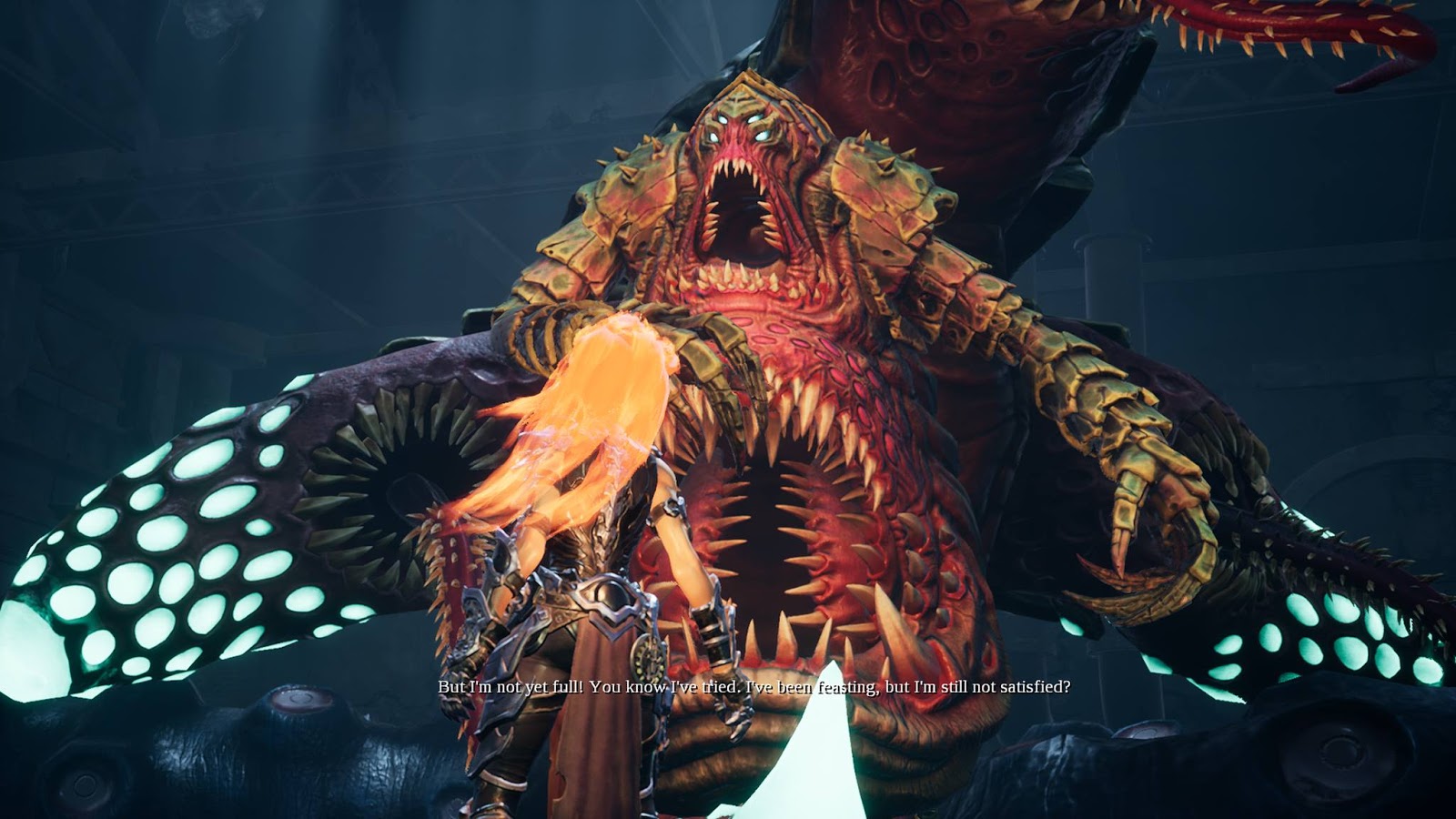 One of the first aspects that comes out to play as you head out on your journey with Fury is that the experience is, to a fair degree, a rather linear one. Puzzles are not the most in depth or complicated. Compared to the first two, the environments have a little bit of a metroidvania feel but just barely. Where Darksiders 3 really shines is that it is very combat heavy and the level of detail into that point shows. Equipped with her Whip as a default weapon, it isn’t long before Fury is granted different elemental forms that grant her new melee weapons as well as elemental attacks. Fire grants her knives, Wind grants her a spear, Force grants her a hammer (they skip Earth and the purple glow is worth it), and Ice grants her an awesome sword.

Each element over the course of the journey will have its role to play. Certain monsters will be weaker to one over another and certain players will be more proficient with one set of weapons over another. Personally by the end I was hopping between the dual knives for a flurry of attacks and the sword for a slower, but much more satisfying crunch that was faster than a hammer. Regardless of your weapon choices however, you’ll want to be fast on your feet as Fury because often enough fights are many against one and if you’re not dodging around or trying to parry, hard enough to dodge much less parry at times, you’ll wind up dying. Again. So you’ll need a bit of help. 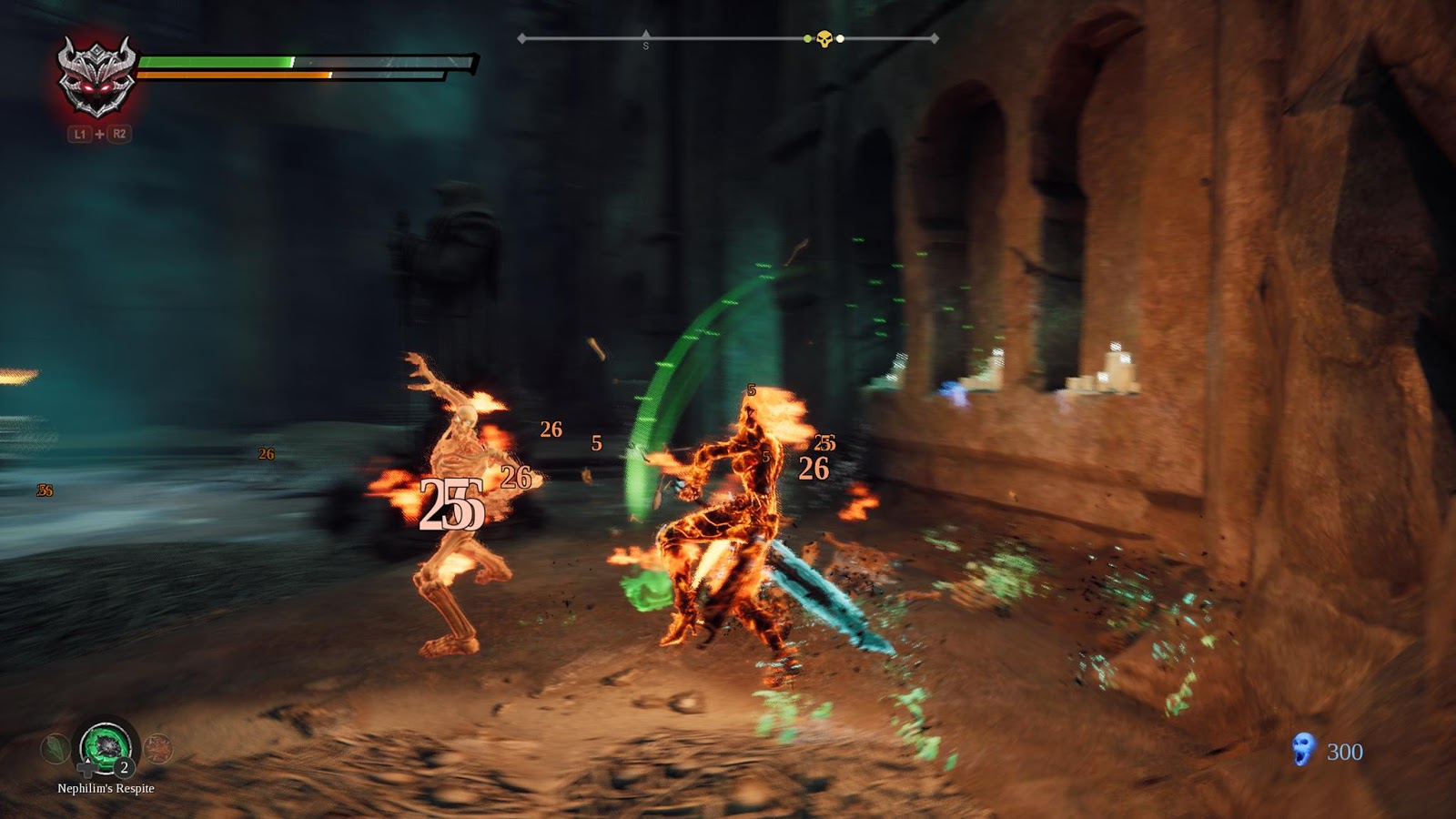 Coming across one of the makers who re-makes his appearance from the original Darksiders, Ulthane challenges Fury to find those left out in the now wasteland. Promising to reward her for doing so, he also offers to upgrade her equipment if she brings him the materials that he requires in order to do so. Upgrading equipment is easy. You find the materials, Ulthane will make the upgrades at no other cost. Finding those left out in the wastelands however is a whole other story. Humanity isn’t completely lost, not yet, not like when both War and Death roam the lands. Fury has the chance to save some that survived but it won’t be easy as they are seriously not easy to find which makes sense as to how they have survived so long. Find enough of them though and the rewards are honestly quite worth it making it seriously worth your time.

Still speaking of those that offer their services to Fury, the demon merchant Vulgrim is also back for his obnoxious, yet hilarious, commentary on just about whatever he wants to say. Trading in Human souls, Fury can through Vulgrim buy items that can be used for upgrades, items that can be used for healing in combat and finally, Fury can sacrifice souls in order to level herself up to greater strengths! Basically, this, with a couple other features are why I said welcome to Bloodborne, but Darksiders style.

One of the other reasons that I had mentioned Bloodborne was because when you die, you don’t “lose” the souls that you collected. Instead, you are given a chance in order to get them back by going back to the location that you died and eliminating the floating spirit that now holds them. What was really cool about this spirit is that you could use it to your advantage especially if a lurking foe was a tough one as while the spirit is floating around, it will be the one collecting souls and not Fury. So the more it collects as you rinse and repeat, the less you have to worry because all of that currency is going into one spot. 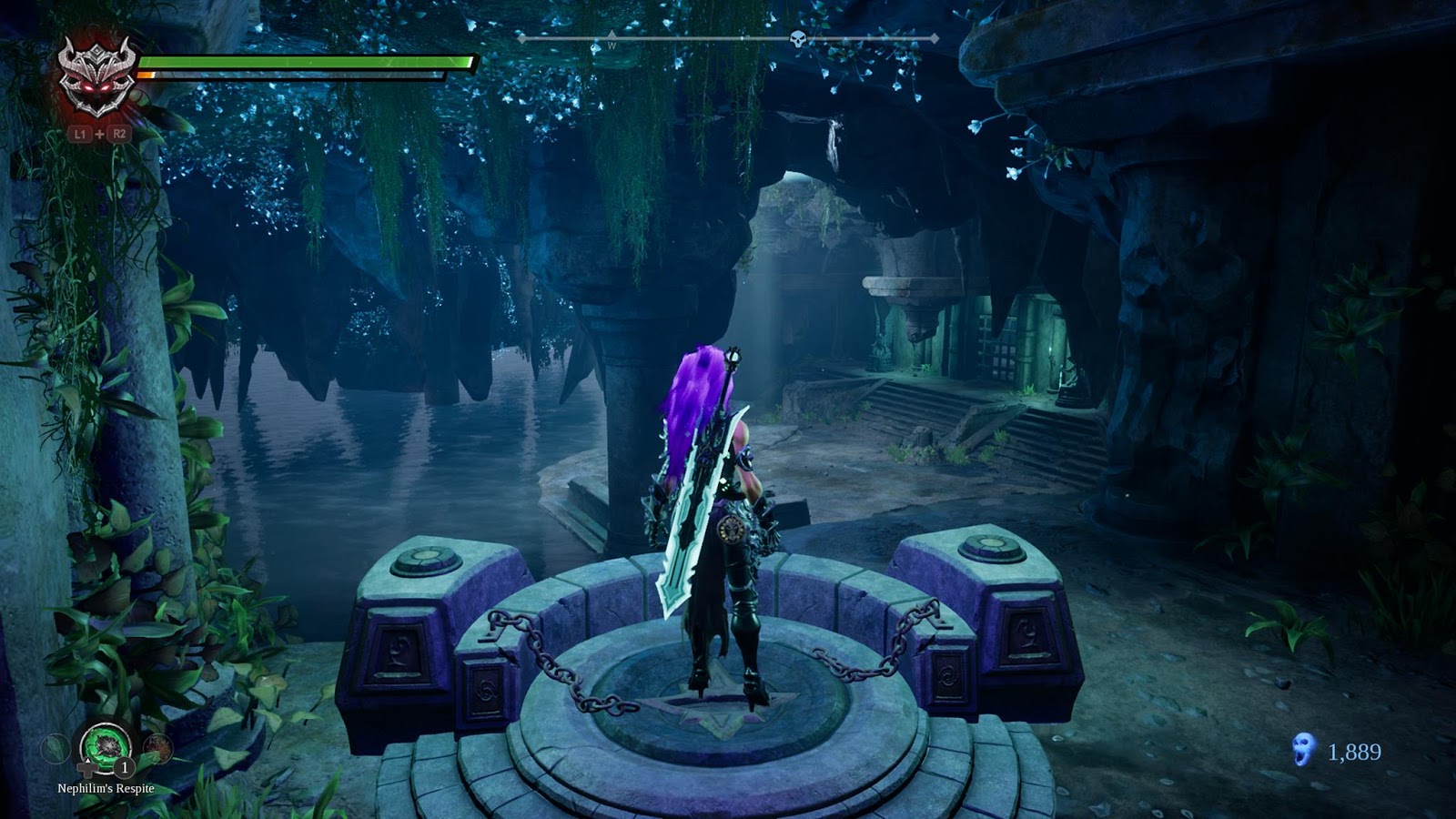 Now to the good stuff. The Seven Sins. Darksiders 3 is all about hunting these badasses down. War was out to clear his name. Death was out in order to help clear his brother’s name. Fury? Well she’s out to hurt someone and it just so happens that she was given seven priority targets and anyone else standing in her way. Now while the adventure is a combat heavy one and that the puzzles are not the most in depth, the story behind it all isn’t a bad one. It won’t win awards for screenwriting, but seeing how Fury herself goes from the hottest loose cannon to a reasonably, and I may use the word a little loosely, level headed being while hunting down her targets is kind of neat. It’s a slow change but the small prods to her character showed that the writers didn’t sit idly by and let this newest adventure.

As for the Seven Sins, the developers get all of the praise. Wow. I’ll be honest that stepping into this latest entry I thought that I knew what to expect and for a few, like Greed, Envy, and Wrath I knew what was coming but for Pride, Lust and to a degree Gluttony and Sloth? Damn. What impressed me the most, and maybe this is a bit of a spoiler, but Pride, who you come across early enough, basically laughs in Fury’s face as she is nowhere near being close to being able to take her on in a fight. This obviously pisses Fury off but Pride shrugs it off and walks through a portal to her own domain basically telling Fury to come get her if she will, but that she’d better be ready. I honestly wish I had run through the portal to see how I would fair but I basically left her for last. 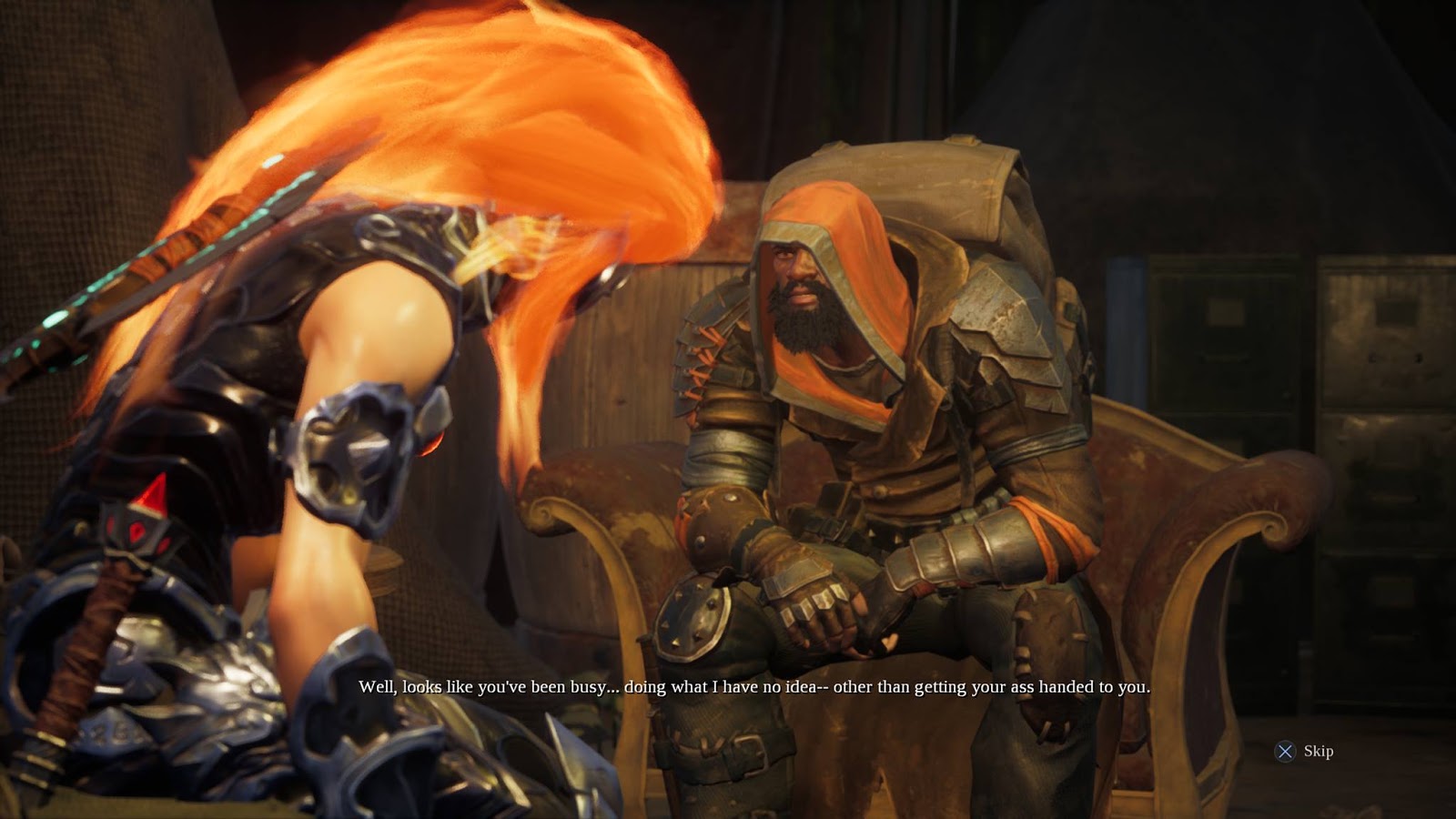 What impressed me the most was Lust. I know what you’re probably thinking. Hell it’s probably what I had been thinking. A den of sex and anything sex related. If that’s the case then you would be as wrong as I was. And I was happily wrong. Lust isn’t about sex, it’s about everything. Lust for power. Lust for Wealth. Lust for whatever you want most. Her speech was one of the best and I’ll be damned if it wasn’t one of the best boss fights in the whole game. Her character was amazing, her dialog was amazing, her boss fight was amazing. All in all she above all else surpassed any expectations that I had had.

The journey isn’t all about just the seven sins though. There are also a few others along the way and here’s where it gets interesting. There are a few other characters than the makers that Fury can meet with and though while one is mandatory and the means in which Fury will gain her elemental powers, the final encounter and the choice made therein isn’t. There is also a Demon which sits on a throne building a tower or a castle that War will visit in a hundred year’s time. You can fight him, or you can let him be. The choice is yours just as it is with the previous one. Mechanically they are both possible optional bosses. Story wise? Story wise fighting either is a choice to be made and it defines exactly who “your” Fury is.

Darksiders 3 was worth waiting for. Is it as good as the first? No, but neither was the second but it was also worth playing through. Clocking in more or less around the twenty hour mark, and that's with most of the trophies, which honestly just happened, it may take about thirty hours for two playthroughs if you want to platinum it unless you start on the harder difficulty. Having having seen three of the four Horsemen of the Apocalypse, Strife is the last one remaining and we've already seen his gunslinger design.

The only remaining question is, will we see more of Darksiders 3? Or is the post credit ending a lead in to the fourth? Guess we'll just have to find out!