The Roccat Renga Boost Headset fills a void that largely gets ignored. There are numerous $100+ headsets out there that promise a flashy design and tons of features, and there are entirely too many $25 headsets that provide tinny sound and cheap materials that help to keep the price down for those gaming on an extreme budget. The Renga Boost lands solidly in the middle, delivering relatively solid performance at a fair price for those who want a bit more from their hardware without breaking the bank.

There are a few things I try to keep in mind when reviewing a headset: how is it made, how does it sound and how will I use it (if at all)?

To start things off, the Roccat Renga Boost Headset is a really basic-looking headset, which is not necessarily a bad thing. We have covered some very flashy (literally) headsets in the past with products by companies such as Afterglow, and while I do not mind a bit of glowing goodness, the fact of the matter is those bells and whistles really do not move the needle for me. As such, a simple, sleek and all-black design does not bother me in the least.

The first thing I noticed when I pulled this headset out of the box was how light it felt. I did not see an ounce of metal in the design, which is not a bad thing in and of itself, so long as the plastic design is well-made. The flexible quick-adjust band is a good start, because it is not only comfortable, but feels like it is built to last. Also, another area where the design saves some weight is in the earcups. There is no horizontal swivel on them, which unfortunately keeps them from being pressed fully flush up around my ears if I move my head around too much. Combine that with the open backs (that sort of look like spokes on a hubcap or bike wheel), and it is easy to see why this headset can feel light but not necessarily cheap.

Whether the open back design is a smart choice or not depends heavily on your use and environment. I say use, because it keeps the cups more open, with air capable of circulating in. If you plan to wear these for hours on end? The light weight and the open backs are going to be a win for you. I tend to play my games in my room with the door closed on the second floor of a house where most of the occupants are on the main floor. Moral of the story? I don’t have a lot of noise around me (unless I am running a fan in the summer). These work well for me. However, I would not want to use these if I had a dorm roommate or four, because they let air in and out – and the Roccat Renga Boost Headset earcups let sound in and out as well.

Those looking for a USB headset may want to look elsewhere, but if you are okay using the separate 3.5mm headphone and mic jacks on your desktop should find this easy to use (complete with a long 8 foot cable). There is also a Y-adapter that you can use to pare this down to a single jack that you can use with mobile devices or console. That being said, some gaming headsets work well on the go, but I do not think that the Roccat Renga Boost Headset fits that category. The microphone does not detach and as I mentioned above, the earcups do not really do a good job of canceling out environmental sound. I would not bring this on the subway to listen to my iPhone.The in-line microphone and volume controls are perfectly functional and keep operation streamlined. 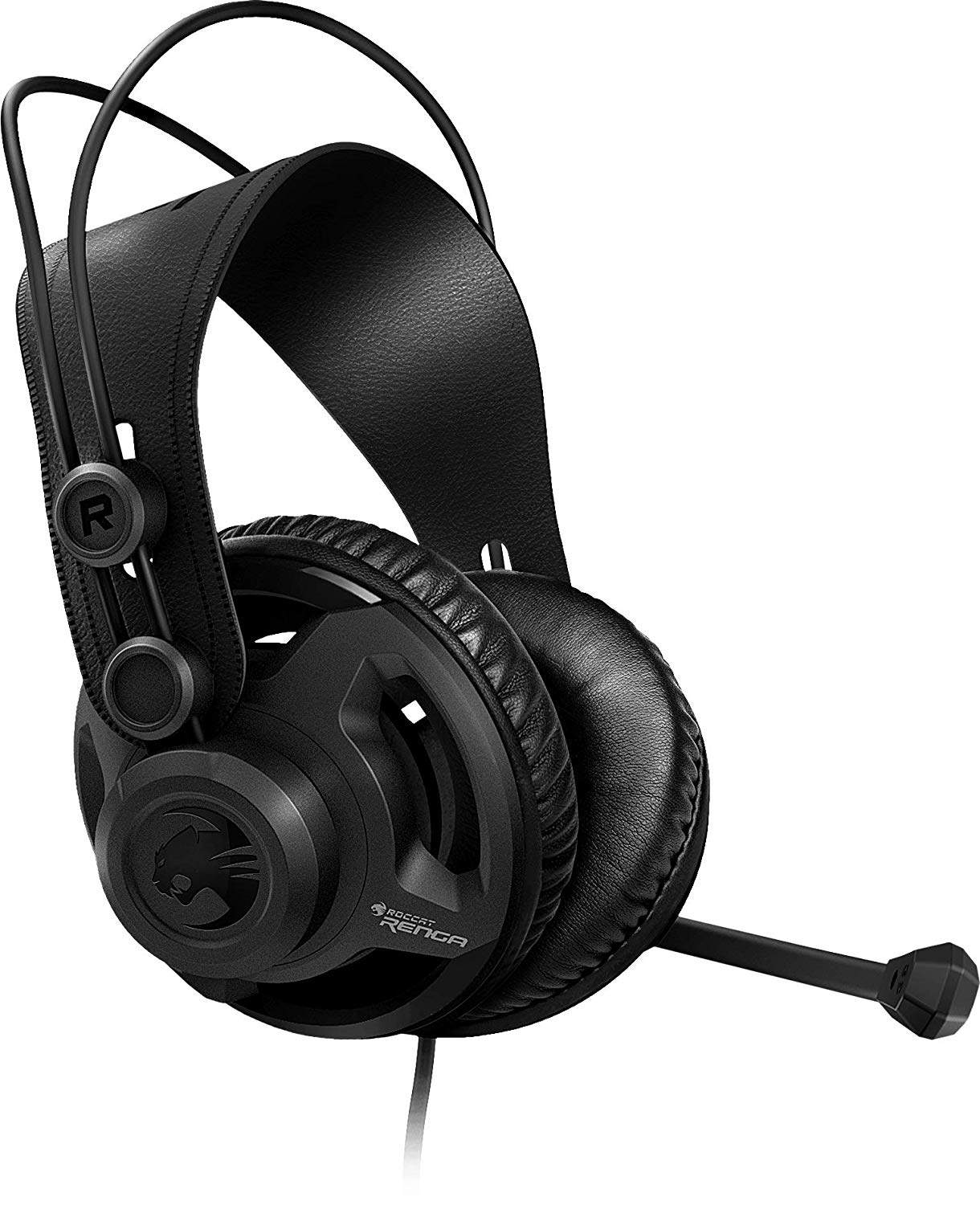 The sound was better than expected. It is not uncommon in these mid-range headsets to see 40mm drivers, so that Roccat has 50mm drivers in was a pleasant surprise that provided some pretty beefy audio. Loud, crisp and with solid range, this headset works well for music, movies and games. The only caveat is if you are listening to something with ample bass, the Renga Boost can struggle to limbo into those low levels. A disaster movie with lots of rumbling or a growling singer with emphasized lows does lose some of that aforementioned crispness to the sound. However, in games with a lot of dialog and lighter music (RPGs come to mind), the flutes and horns sound great and I was able to make out every spoken word. I do wish that the microphone held up a bit better, as it seems to have the opposite issue. I do not have a deep voice, but this microphone was providing more bass than I expected when recording my voice, and in group play my friends said I sounded just a bit ‘off’ when compared to my usual headsets. It was still performant, just not natural-sounding.

So what about games? Well, that depends on the types you play. Walking around Skyrim listening to Jeremy Soule’s fabulous soundtrack and conversing with citizens feels like the perfect compliment to this headset. Where I would not break this out is a game of Call of Duty where footfalls and bullet trajectories are important. While the Roccat Renga Boost Headset delivers excellent sound quality overall, the directional audio is somewhat off. There were times I was looking directly at the source of a sound, and it just felt a smidgen off-center.

The key when shopping in the middle range of gaming headsets is understanding your needs, as your mileage will vary. I can easily recommend the Roccat Renga Boost Headset for those in an environment where ambient noises are controlled and for playing games where directional sound does not matter. This might be a bit more of a dicey prospect if you occupy a noisy area or rely on your audio accuracy for gaming success. I do however, think that this headset deserves a nod of the head towards the comfortable design and flexibility to use it on more than just a PC. That value is here, just be aware of how you plan to use them.