You are reading
ToeJam & Earl: Back in the Groove – PS4 review

I must admit, I never thought I would see a new ToeJam & Earl after part 3 on the original Xbox but here we are 17 years later with a new installment. I played a lot of the two ToeJam & Earl games on the Sega Genesis when I was a kid so you could say I was excited to try Back in the Groove, especially knowing that Greg Johnson, the original creator, was also making this one.

Upon starting, the first thing you’re greeted by is the games first and only cut scene. Let’s start with the story itself. ToeJam, Earl, Latisha, and Lewanda head back to earth just so ToeJam can impress Lewanda. Once they get to earth in the Rapmaster Rocket they find things too quiet so ToeJam tells Earl to turn on the sub and to hit the red button that says don’t press. Of course, Earl presses it which makes a black hole that sucks earth and the Rapmaster Rocket in. Now the ship is in pieces and they must find all the pieces to get back to Funkatron.

Luckily no one plays ToeJam & Earl games for their story but that wasn’t the only thing that made this scene so bad. I found the animation to be of poor quality and then there’s the sound issue. The scene plays music and there is different background music playing at the same time. The sound problem could be fixed with a day one patch but as of this writing, it has not been fixed. (Note game just update and the problem has been fixed) The voice acting in this short scene is decent enough with singer Tonez the Prince as ToeJam and Greg Brown reprising his role as Earl. 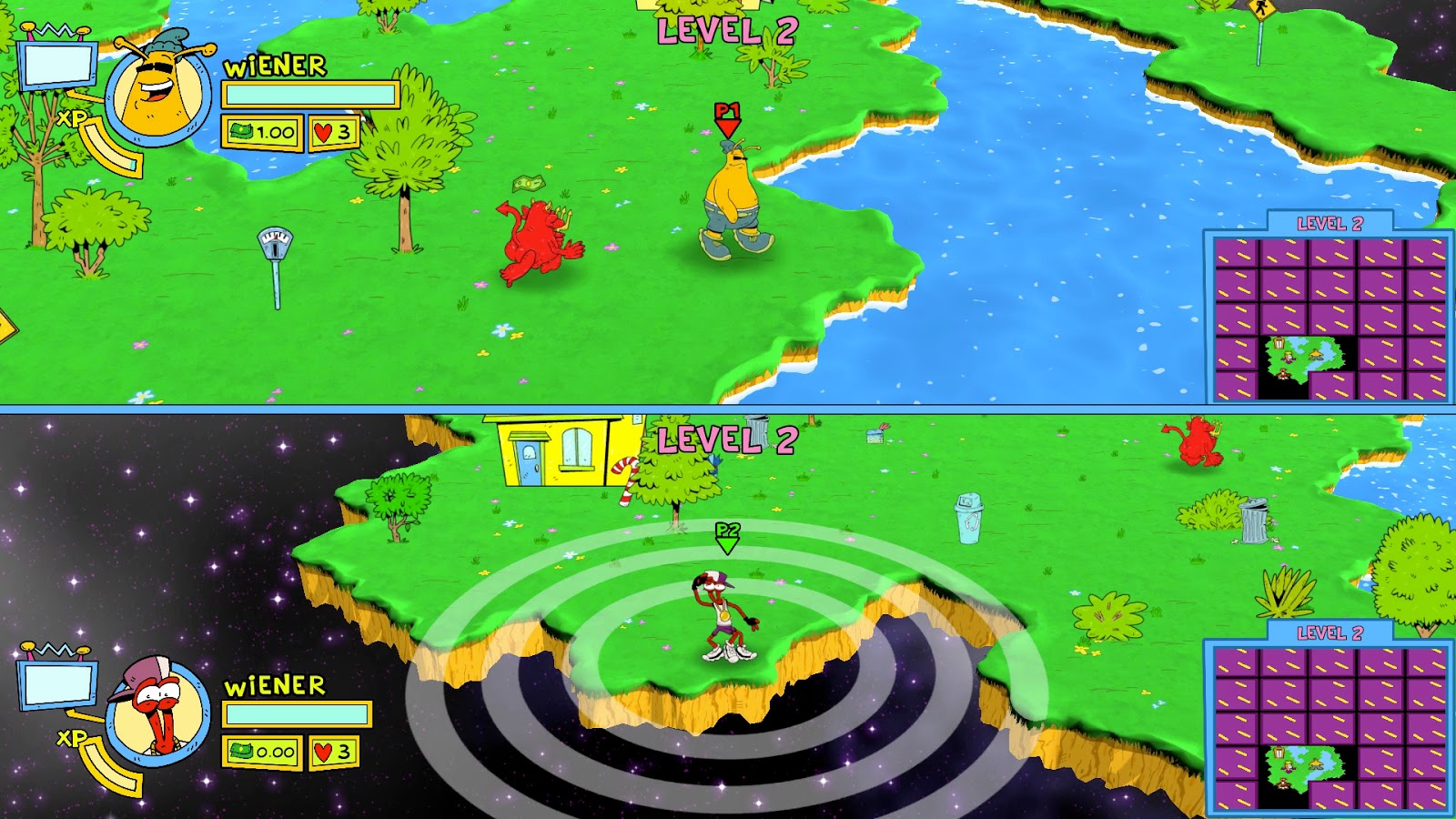 The player can pick from six characters to start with and three others that can be unlocked. There are two versions of Toejam & Earl to pick from. The new ones or the old school versions where they look like they did back in the original game. Each character has their own skills and presents they start with. ToeJam starts with the hi-tops present that lets him run and one of his special skills lets him have double time with them. Earl starts with food presents that restore health and his skill lets him eat any food without hurting him.

After selecting a character, you can pick the difficulty level for that character. If playing multiplayer, both players pick their own difficulty level. You can pick normal, Easy-Farty, or Toddler. I played and beat all game modes on normal but I did try out the easier difficulty settings. Each one lets you take less damage from enemies and on toddler mode, you take almost no damage and can swim for as long as you want without needing air. Toddler mode was in fact so easy that I let my four-year-old nephew give the game a try and he didn’t die once… and this was the first video game he has ever played. These settings allow anyone to play, whether you’re a young gamer, new to ToeJam & Earl or someone who has played them all like me. 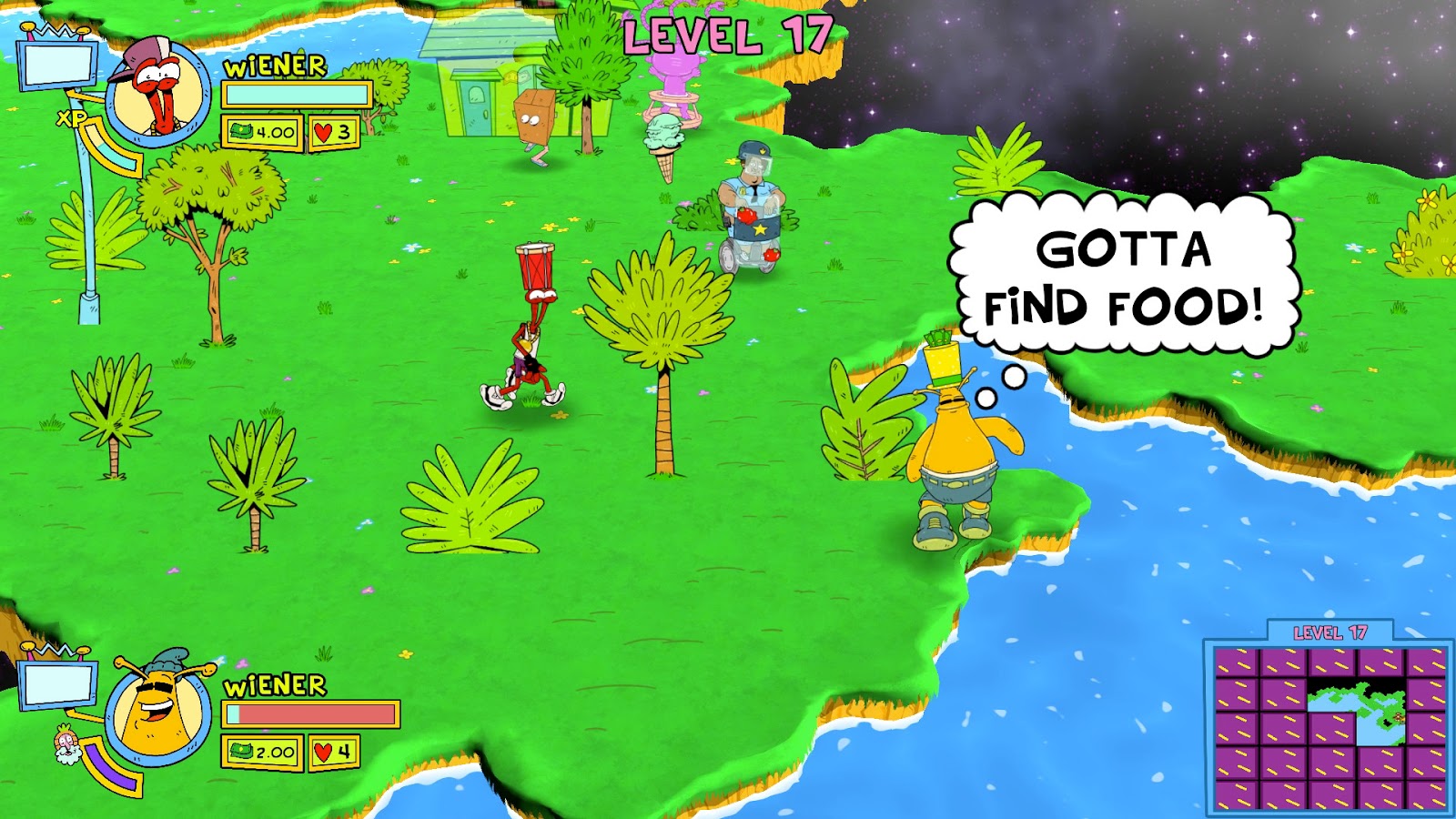 Back in the Groove plays much like the original game with some features from the second. You are tasked with finding ten ship pieces strewn across twenty-five levels. Some of the features added let you search trees, bushes, and even houses by shaking them. Sometimes you may find something good like a present, food or money. Other times you may find something bad such as a bad earthling or a bowling ball that hurts you if you get hit by it. Thankfully, bowling balls can also be used to take out bad earthlings if it hits one of them… be sure to spare the good earthlings. A few mini-games from earlier installments return in a rhythm game where you match button presses and the return of the Hyperfunk Zone. An endless runner type mini-game that fans will remember from the second game.

Doing well in these games can give you money, experience points, and presents. You also can get experience points for almost everything you do in the game like opening presents, opening a part of the map or finding something hidden. All these points let you level up by visiting a Wise Man in a Carrot Suit. Much like the original game, you level up from wiener to dufus and so on. Leveling up randomly picks three stats to go up. You could end up with more speed, health, or room for more presents to name a few. To advance to the next stage you must find an elevator, again like the original game but this time instead of it going up really fast which too me gave me a headache, this time around it goes slow. Also, you will get text in the elevator of what your characters are saying. Some of these can be funny and they change depending on whether there are two players or not.

Multiplayer is where this game shines. I knew exactly who I wanted to try this game with, the person who played the Sega game with me all those years before, my Dad. In split screen couch co-op you can do much more than in single player. Running low on health? You can hi-five the other player to share health. Ran out of lives? You can give one of your lives to your friend to bring them back! Even some of the presents are for multiplayer like the present that heals your partner. At the time of playing the game, there was no online multiplayer until a new update that just came out today. Due to this I was unable to test out online play. 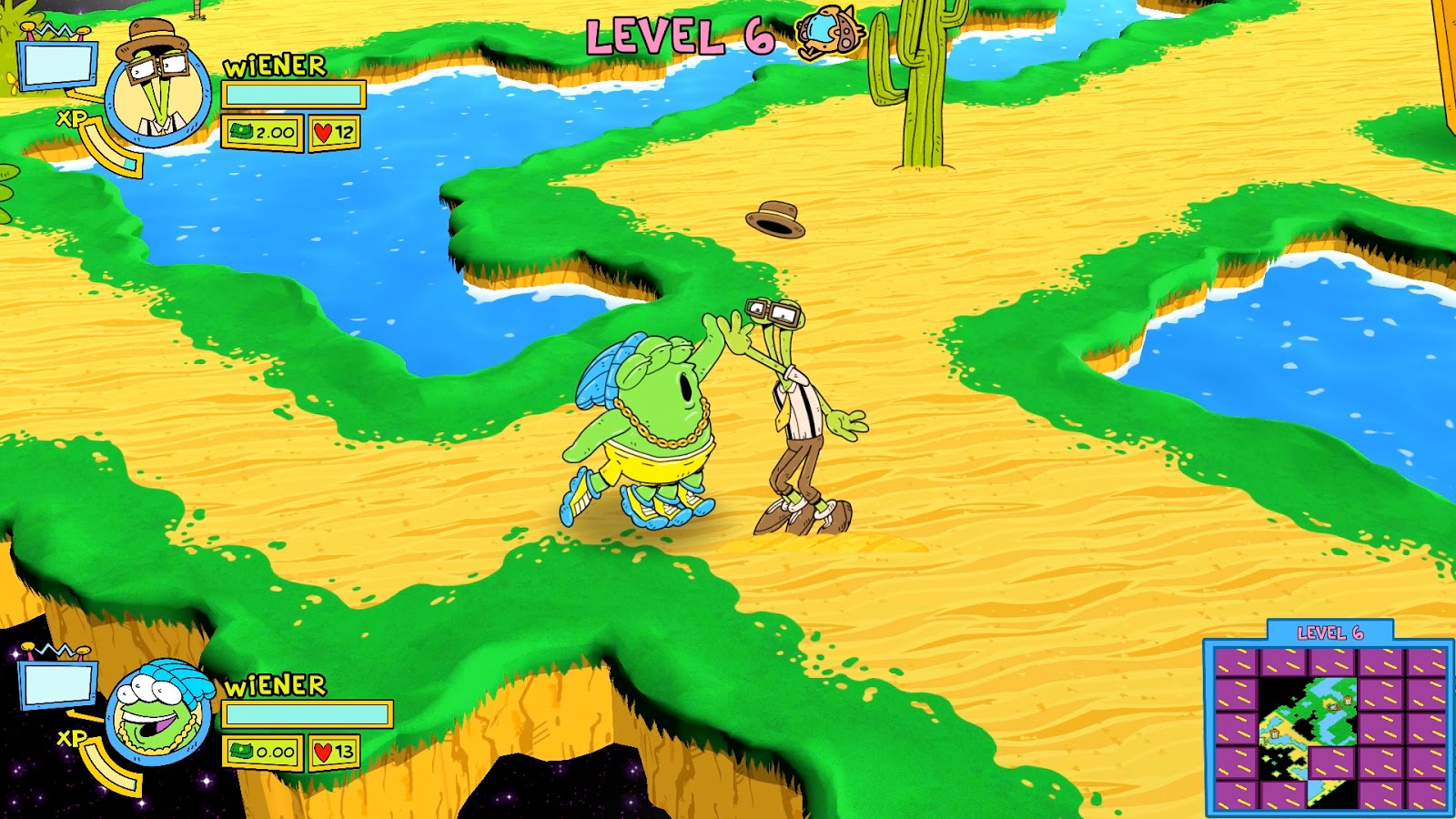 The remixes of some of the songs from the older games are really good. Cody Wright did an amazing job updating these classic game songs. If you beat the game, you get an awesome song sung by ToeJam & Earl. Beating the game is worth this song alone but you also can unlock one of three new characters to play as each time you beat the game. Upon completion you also unlock “power hats”. You pick one of three power hats every-time you beat the game. Power hats give you power-ups like being able to eat any food even if you’re not playing as Earl, allow you to walk on sand, snow, water and many more hats can be unlocked. At the start of the second stage, the game asks if you would like to enable them. You can also do this in the menu so you are not forced to use them if you would rather play it old school. One other thing about power hats is they are randomly picked at the beginning of each level. So the more you unlock, the more random your picks become. Sometimes you might get none at all.

Back in the Groove can also be humorous at times. Opening the present gassy tummy makes your character fart randomly for a time and when you do, it sends the earthlings running away. Sometimes you can get amped presents which are more powerful versions of the normal ones and the farts are much bigger! Call me juvenile but I couldn’t help but laugh at this. One other thing that I found hilarious was the earthlings “scientific names” like the Clipboard Volunteer who, if she catches you, takes your money. Well her scientific name is “Standaroundus Takeyermoneyum” and the Cosplay Nerds are known as “Embarracus Awkwardicus”. So be sure to look at the ‘how to play’ and read the names, you won’t regret it.

Back in the Groove is a great throwback to the original game. So great you could almost say this was a remake and not a sequel. It's a lot of fun to play with another person but when playing alone it can get old fast. After beating the game multiple times, I just got bored of doing the same thing over and over. On the whole, the game is fun for short bursts or with a friend but there's little reason to play repeatedly unless you want to unlock all of the power hats. I also didn't like that they used the same old mini-games. They could have added something cool or neat but instead used something that has been done before. ToeJam & Earl Back in the Groove is not a bad game and the nostalgia you feel while playing the game is great. Still, it left me wanting more from it.