You are reading
Dragon Quest XI: Echoes of an Elusive Age – PS4 Review

Dating back to the first days of the NES, Enix came up with a series that while not as popular as Square’s Final Fantasy “in the West”, would be very popular back home. Having released the latest entry late last year and having recently announced the revamped version coming out by the fall for the Nintendo Switch, here is one of the best damned adventures that I’ve had in a long while.

After several long years of quiet for the main line of the series, Square Enix’s Dragon Quest XI: Echos of an Elusive Age brought the series back to the front and center of RPGs minds. Having been in development for both the Nintendo 3DS and PS4 it was unclear of which we would receive until the decision was finally made for a PS4 and PC release giving us the more modern graphical look instead of the more retro one that the handheld provided. Don’t worry if you did in fact want that retro style as the Nintendo Switch version later this year will have the option to switch between the two.

A large appeal to this series, for me, has always been the cohesive style and approach that each entry has provided. It isn’t just iconic monsters that come back for a cameo, but all of them alongside new ones. Slimes, Golems, Armored Knights, Saber Cats and so much more keep making returns but in higher quality. Combined with sound effects and background music that also keep making returns but with their own refinement and one could question if the series really does anything new. 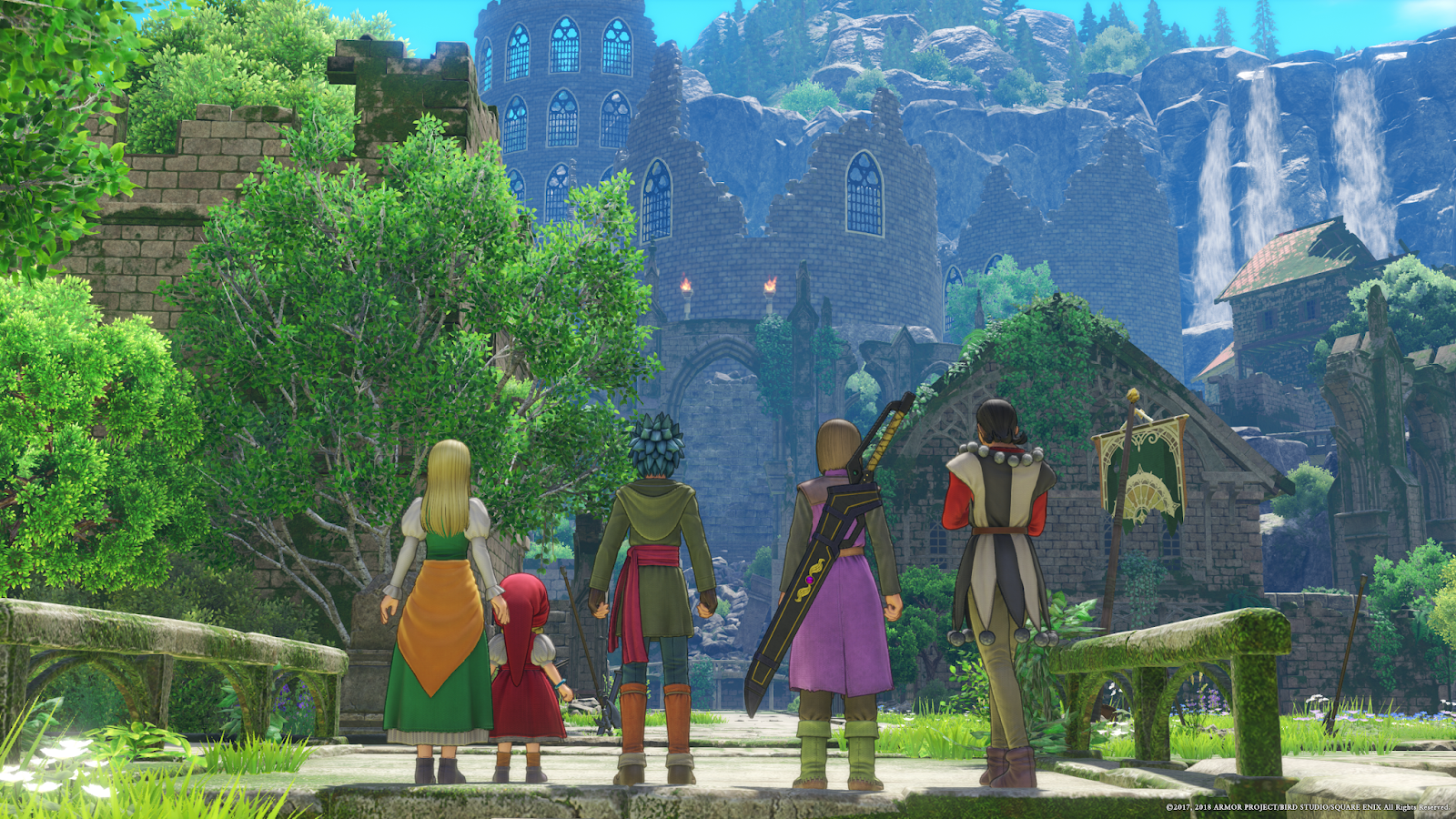 In case you may be wondering it does. Compared to so many other franchises that make new, bigger, better, flashier styles and gameplay innovations, the Dragon Quest Series both holds on to classics JRPG styles while also inputting modern elements to make it smoother and more enjoyable to play. Featuring some of the smoothest gameplay yet, Dragon Quest XI is a classic turned based RPG designed for today. You can explore vast environments, climb up cliff sides, ride monsters in order to discover new areas, summon a horse and as a blessed first, save in locations other than a church. But maybe that’s getting ahead a bit, let’s take it from the top shall we?

Dragon Quest XI: Echos of an Illusive Age sets you into the role of The Luminary. Prince of a now fallen kingdom, you’ve grown up in a small and quaint village knowing nothing of your heritage other than now is the time in which you must perform the coming of age ceremony with one of your best friends and her dog. Or “your” dog as the two of you are rather close and the loading screens mentioned that you’ve rescued her together.

Completing the ceremony and heading off towards the capital after having read a letter left to you by your adoptive grandfather, things soon turn sour and set the adventure into its proper pace as the King has denounced you as Darkspawn and not Hero of Light after the hero Erdwin from Dragon Quest III which was a prequel to the original Dragon Quest. Rushing back to the village after pulling a jailbreak with a new found friend and party member, you find the village raised to the ground and there’s no other real option than to set out into the world in order to fully come into the Luminary’s power and once again banish the encroaching darkness. 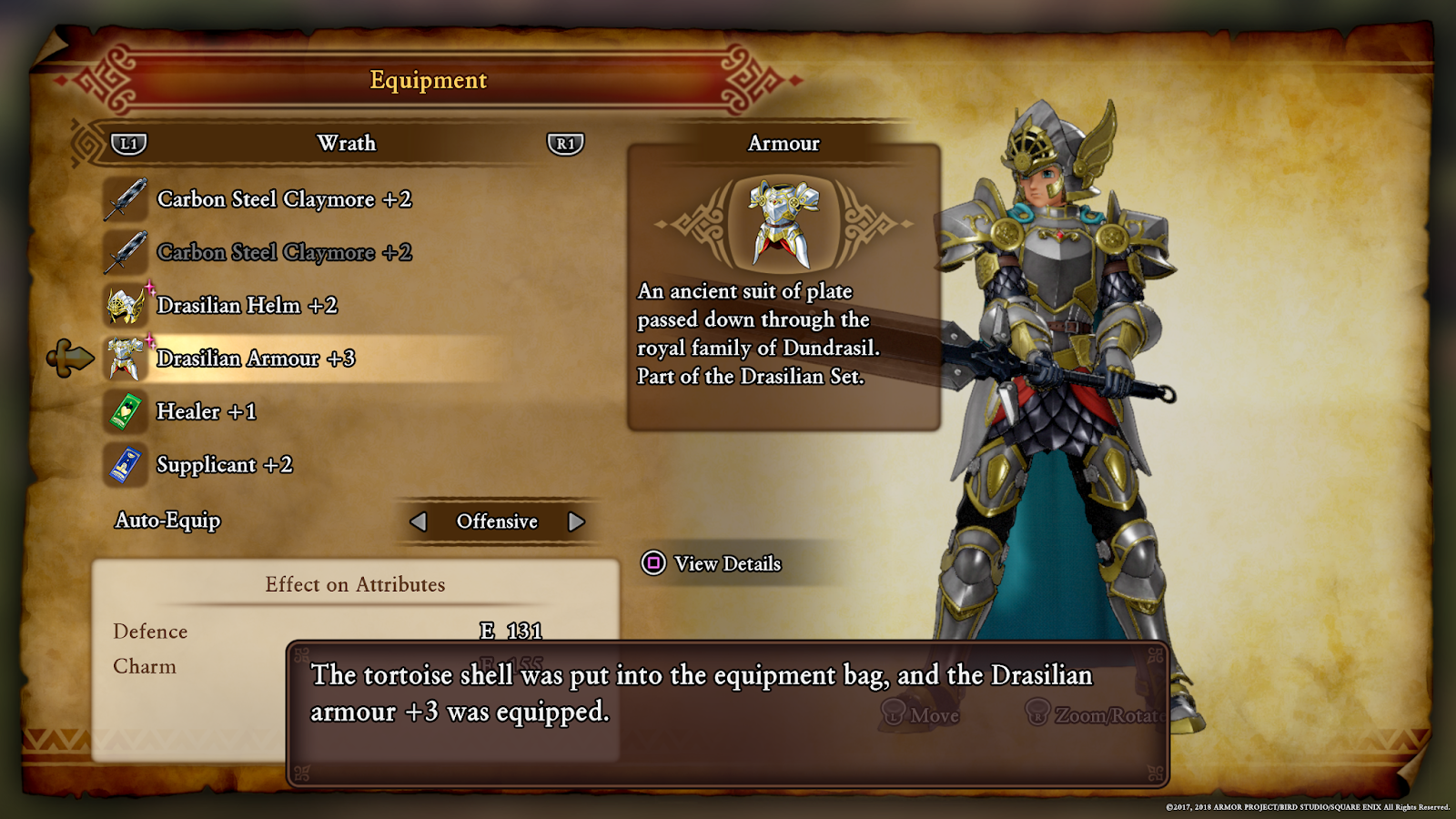 While Dragon Quest, like Dragon Ball as they share multiple similarities in their artstyle and visual creators, looks all nice and cuddly, it really often showcases a rather dark story with plenty of tragedy and sorrow. The visuals help soften these blows but often you’re left wondering if you shouldn’t just go cuddle something fluffy for five minutes in order to get over what you’ve just witnessed. This is honestly the sign of great storytelling and the overall writing of the characters only supports this as the hours go on.

Starting off with only one available party member, you’ll soon be putting a full cast of characters together that only ever compliment one another both in terms of combat and in terms of the story. What impressed me with DQXI is that while they’ve thrown in your typical stereotypes, they aren’t exactly your stereotypical characters. They’ve got depth and they aren’t always what they seem like your most powerful mage Veronica.

Measuring a grand total of three foot nothing, anyone seeing her for the first time would say, oh hey, there’s the loli character that every JRPG seems to have. “Waves a Monty Python flag” yaaaaaaay. However you would be wrong. While Veronica is a grand total of three feet tall, she’s was a fully grown adult like her softer mannered twin sister Serena until a group of monsters stole her age as well as her magic. With only her magic returning, Veronica is kind of stuck that way which suits her better as she’s now got a longer lease on time in order to perfect her craft. 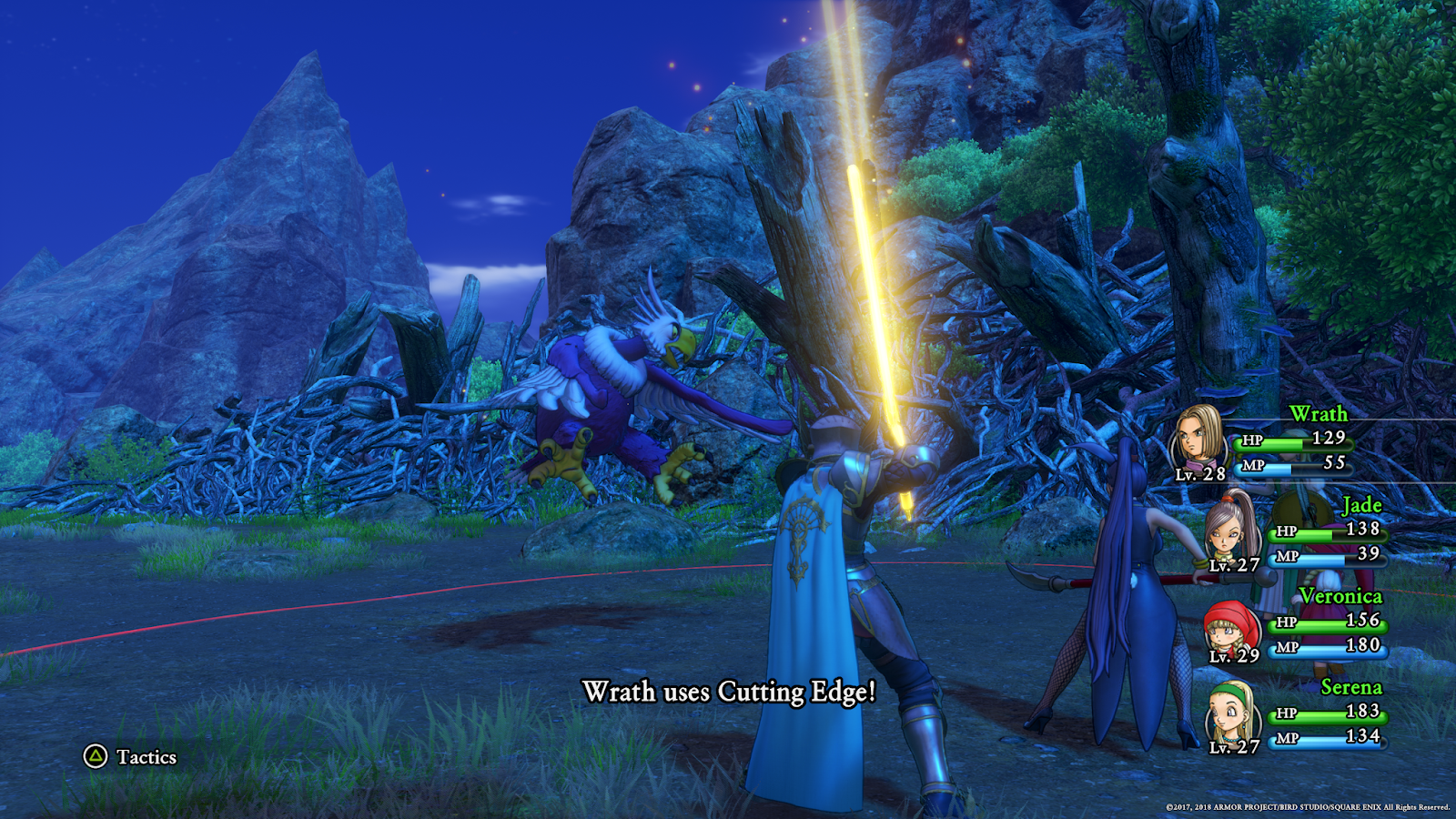 A lot of the other characters are like Veronica in which they aren’t what they seem to be. Erick the thief I kept expecting to stab me in the back or turn tail because no one can act that charming and laid back while easily holding a dagger. He doesn’t. He genuinely follows you because you are the Luminary. Sylvando the flamboyant jester warrior, follows your party because he knows it’s the right thing to do for the rest of the world because of the quest you’re on. Like Erick though you keep waiting for the other shoe to drop but it doesn’t.

This is just a two second recap of characters that take hours, if not dozens of hours in order to truly see why they do what they do. The pacing is perfect and just when you think you have everything figured out? The end of the world happens. Cue Act 2.

Whether in act one or two though, the dialog and the gameplay showed the same level of care. Exploring the world, whether in the starting kingdom or the surrounding ones, the world feels alive and vibrant even if the only thing you ever really see are tons and tons of monsters. The colors that are used for the series are bright so even in the darkest of days, there’s a bright color palette that stays appealing to the eyes. Where some of the quality of life improvements come in are mostly within the exploration of the world. Returning from the mobile version of Dragon Quest VIII is the auto run feature which lets you take your hands off the controller for a little bit while exploring but what improves upon it is the dash feature that lets you spring across the fields in order to get there that much faster. Adding onto even that is the ability to summon your horse from any campsite which speeds the above up even further including allowing to run over and dispatch smaller monsters that you may not be in the mood to fight.

Being able to explore in peace is a huge bonus as DQXI has done away with random encounters but has amply put in enough goes into the field to help you if you’re grinding for experience but not enough that they’ll get in the way if you simply want to explore. The balance was great and as mentioned above, having the monsters on the field makes the world feel more alive.

Fighting monsters is pretty standard. You can attack, use magic or use an ability to defeat the foes that come your way. Another returning staple of the series are the bubbly numbers that appear above both allies and enemies heads for both healing and damage. Abilities tend to be a bit more showy than magic and back again in the more fun style of the series is that even if characters have the same moves, they perform them a bit differently than one another which is another small added detail that just improved the overall experience. Where things change a bit is now instead of learning abilities on certain level ups or by learning abilities from points that you acquire from leveling up, you now do both which is honestly a lot more fun. Points have always been a bit limited and having to save up for abilities that you want has always been a bit tedious. Having moved this new system that expands as you unlock skills instead if a list, characters are all fairly customization with the skills that they also learn as they level up. And to sound like a broken record, the best part is that you can undo these changes for a monetary compensation to the church who will pray to the Goddess on your behalf as they reset you points.

Speaking of the church, it is finally not the only method in which you can save the game, remove curses, check your level status or redirect your allies short of very expensive items. Now instead of only having the church, characters will pick back up once the battle is over as also for a first in the series, you can swap your characters in and out of the entire roster. No longer do you need to figure out who you truly want as a main party.

So what do you do now instead of having to always run back to a church to pray to the Goddess in order to save your progress? You can now pray to her yourself through various statues that grace the lands that you’ll explore which leads into the last of the quality of life additions. Each of these statues can be found by campsites that allow your party to set up camp, rest the length of time you want without an Inn, buy items from a travelling merchant, and finally create items that you find recipes for on what is known as the fun sized forge. Item creation has always been around but what makes it all the more important this time is that often you can create items that you wouldn’t find otherwise. These items are worth the material cost and the exploration that you’ll need to perform the basic synthesis which does not guarantee a success. Once you have what you need you’ll have to hammer in the details on your own which involve working on the heat of your forge and keeping in mind how many points each of your hammer strikes will cost. The closer you get to perfect, the higher the value of the item going all the way up to +3.

Having these tools makes grinding levels to prepare for bosses that much easier as you can even go as far as to modify any equipment that you’ve purchased as long as you have perfection pearls. These pearls come from either successful forging of items or by a particular merchant that you can find if you make sure to visit every store in every location that you visit.

Between all of the new features, the same robust gameplay that Dragon Quest has always presented and the wonderful story and characters, Dragon Quest XI: Echoes of an Elusive Age is the best in the series yet. So how does something get even better than this? It may be better on the Switch later this year when new features are added including elements that had only previously been available in the Japanese only 3DS version.