You are reading
The Walking Dead: The Telltale Series – The Final Season – PS4 Review

Clementine has made for an interesting character over the last seven years, showing a great deal of growth in multiple ways. I never expected this small girl I encountered back during the first season of The Walking Dead to wind up becoming the primary one who would serve as the connective tissue for so many more episodes and seasons. The Walking Dead: The Telltale Series – The Final Season is laser-focused on Clementine and her relationship with adopted son A.J. and how eerily similar Clementine’s life has come to mimicking her early protector, Lee.

For a series built around the fear of an untimely demise, I suppose it is almost poetic that this season almost never reached a proper conclusion. Major kudos to Skybound for jumping in and helping to make sure that we get closure for Clementine and this series of games. Whether or not you are okay with the way the series ends will likely be a matter of personal taste, but I for one was very appreciative to at least get the opportunity.

It is interesting to see how the first episode kicks things off, with Clementine in a car (not unlike Lee, though he was in the back seat of a police cruiser) all those years ago. There are constant call-backs (even the image I used at the top of this article is purposely similar to the one we saw for season one where Lee was standing protectively next to Clem against a bright orange background while surrounded by walkers), some more subtle than others, that hang over the entire four episode arc. After all, things did not end well for Lee. He accomplished something important – without him Clementine would most certainly have perished multiple times during the first season, and were it not for the life lessons he instilled in her, likely Clementine would not have survived the subsequent seasons either. 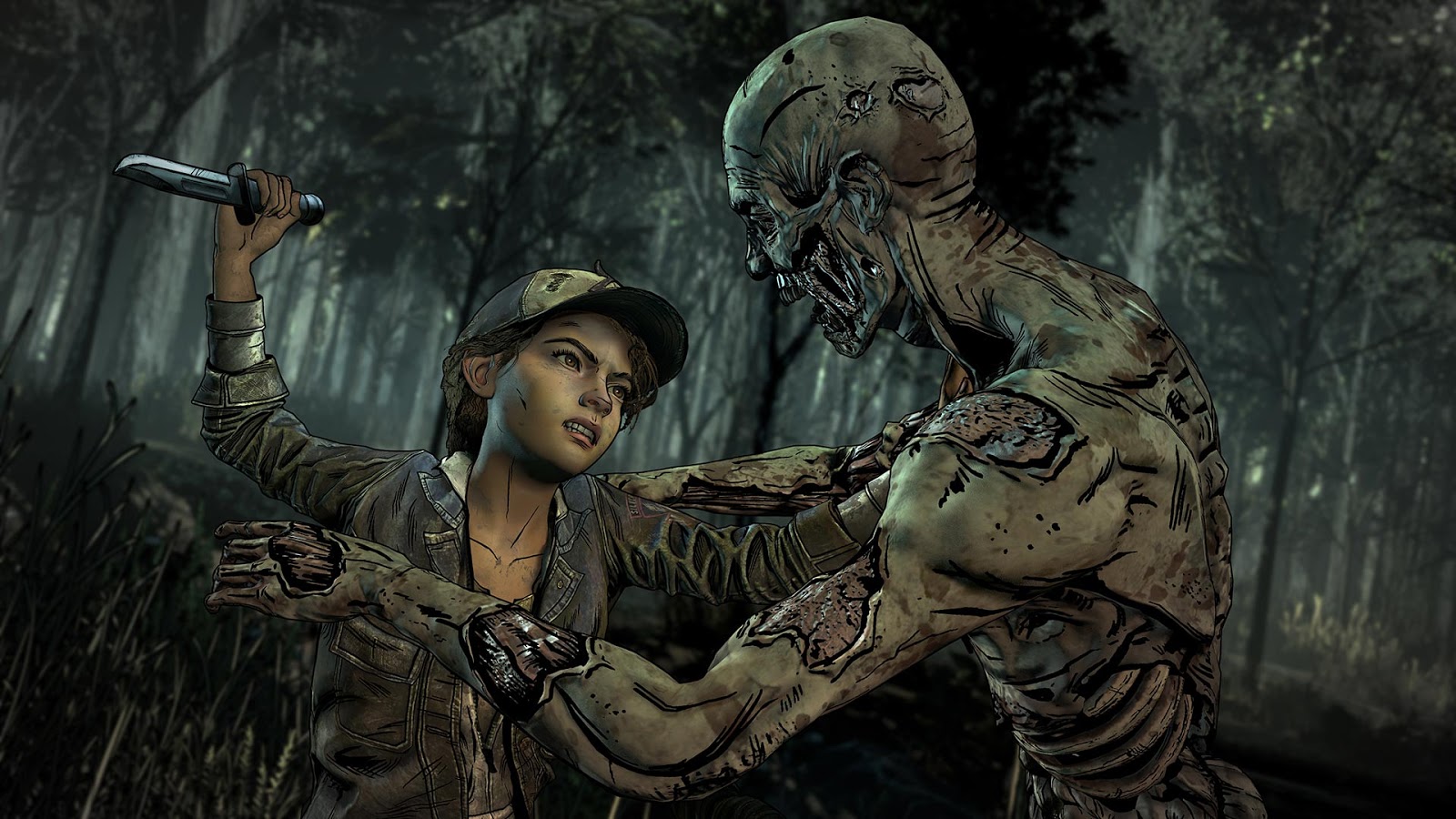 So while the specter of Lee hangs over everything, it is important to note that Clementine is also her own person, and her challenges with A.J. are quite different than Lee’s challenges with her all of those years ago. Lee only knew Clementine a short duration when he became something of an adopted father figure to her, but Clementine has been with A.J. by and large since the beginning. She is not his actual family, but she is as close as he has ever known. Clementine had her childhood cut tragically short by the initial zombie events, but she had experienced some life before the zombie apocalypse. For A.J., this is all the life he has ever known. So while there are parallels to be had here, it is not a 1-to-1 translation, which certainly gives the events told in the final season their own slant.

Of course, the zombies have been the catalyst for what has gone wrong in this world, but as has been the case many times before – despite their undead, shambling state, the walkers are in many ways far less of a threat than people are. Many times desperate measures are understood – after all, early on Clem and A.J. are investigating a house looking for food. Through a particular lens, many actions can be seen as understandable as people try to survive or to provide for their loved ones. However, there are still plenty of instances where people are their worst simply because they can be, because the circumstances that have been depicted allow for those with questionable consciences to excel in this kind of world because they can more easily do unsavory things.

At the core of the long-running Telltale experience is the ability to make choices – or at least the illusion of choices. The vast majority of those made along the way have little to no real impact on what happens next, but I think with this being the final season, the developers had a bit more freedom to try and make decisions carry a bit more weight. In the earlier seasons, you would often pick one person’s side in an argument – or perhaps in a fight – but it might not matter because in three episodes they would both be dead anyways. In subsequent seasons many of these decisions began to feel as though they carried more weight, but the truth of the matter was this: the directions of the paths along the way might change a little here or there, but in the end they all led to roughly the same place. I suspect that this realization is part of what did Telltale in, as their titles were probably no longer selling the way that they used to. 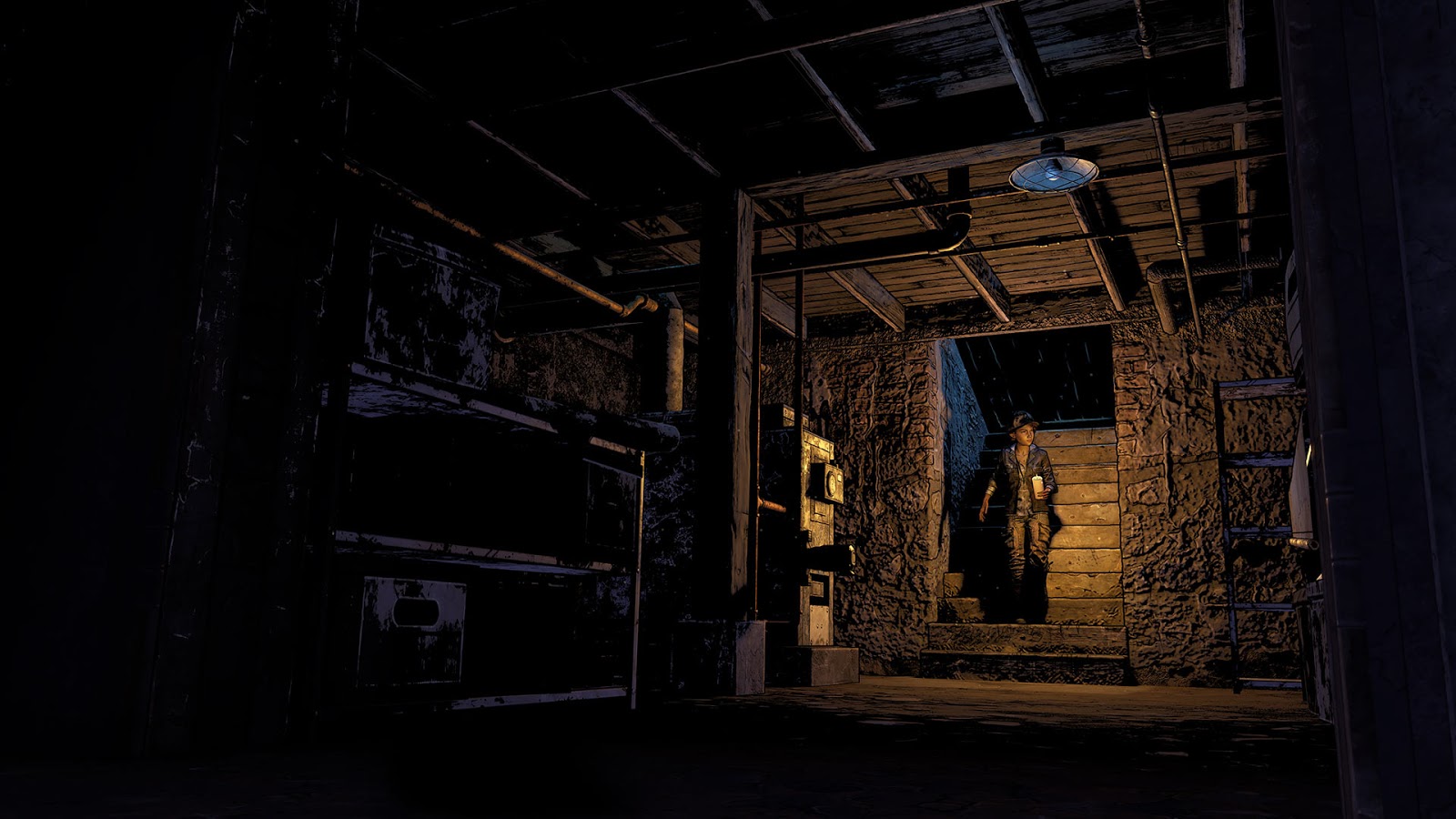 Still, in this season there was more heft to some of the bigger decisions, and it seemed to trickle into the events just a bit more than I previously recall. One of the other gameplay changes comes in the more free-moving action sequences. These are still glorified quick time events, and they are still basically on rails, but the rails have been loosened up a bit with a more free-moving camera and it is a nice change of pace, even if the end result is not overly game-changing.

That this final season is only four episodes is probably a good thing as well. There are some really poignant moments that had me reconsidering what I thought I knew about the walkers, about this reformed society in general. That being said, the pacing is always a little hit and miss in these games, and that still happens here – though by only being four episodes I think by and large the developers were able to make sure that they hit the narrative notes they really wanted to, without a ton of padding in between.

The ending is interesting, and I suspect it will resonate with people differently. I enjoyed it - oddly bittersweet in part because this is a character I have been following now for the better part of a decade, but also because of what it represents for Telltale games. While the studio had been around for years before The Walking Dead, it was really Clementine's and Lee's initial adventure that won the studio lots of acclaim and put them on the map. There were likely many ups and downs for the studio in between, diverging paths that all led to this - the end of the studio as well as The Walking Dead series. So I got to say goodbye to both a studio and a character I cared about when I put down the controller, thankful for the opportunity to be there from beginning to end, even if I might have personally wished a few things had turned out somewhat differently.