A Spinoff That Makes It Rain and (Mostly) Brings the Pain

Over the course of time (30+ hours), I’ve developed a bit of a crush on Earth Defense Force: Iron Rain. If the game were a potential romantic interest, I’d of already invited it out for a night of rooftop dancing, so as to woo it with my patented Dragon Shuffle, as the starlight draws attention to my insecticidal shoulders, organic boulders broadened by countless battles with blood-thirsty bugs. But I need to be real with you, soldier. As a decorated veteran trooper who has been enlisted in the Earth Defense Force for 12 glorious years, I didn’t think too highly of Earth Defense Force: Iron Rain when I first witnessed it in action.

It was a recon mission, two days before the title’s official release. Armed with a buck knife clenched between my teeth and a tank top that made my chest worthy of its own biannual birthday celebration, I army-crawled into a Twitch stream of EDF: IR. With my binoculars set to “open-minded excitement,” I observed gameplay of the title’s first ten stages. Initially, torrents of astonishment harmoniously babbled from my chest to my trigger finger; the disgusting and demonic enemy designs, the newly implemented character customization, the sleek and stable presentation – oh, behold how the EDF has evolved!

That was my impression, anyway, until I looked past the novelty of these additions and improvements and came to a realization that bit me like a chomp from a two-story ant: In order for the game to uphold this fresh graphical fidelity and solid performance, drastic reductions had to be made to both the size of the stages and the quantity of threats on the battlefield. 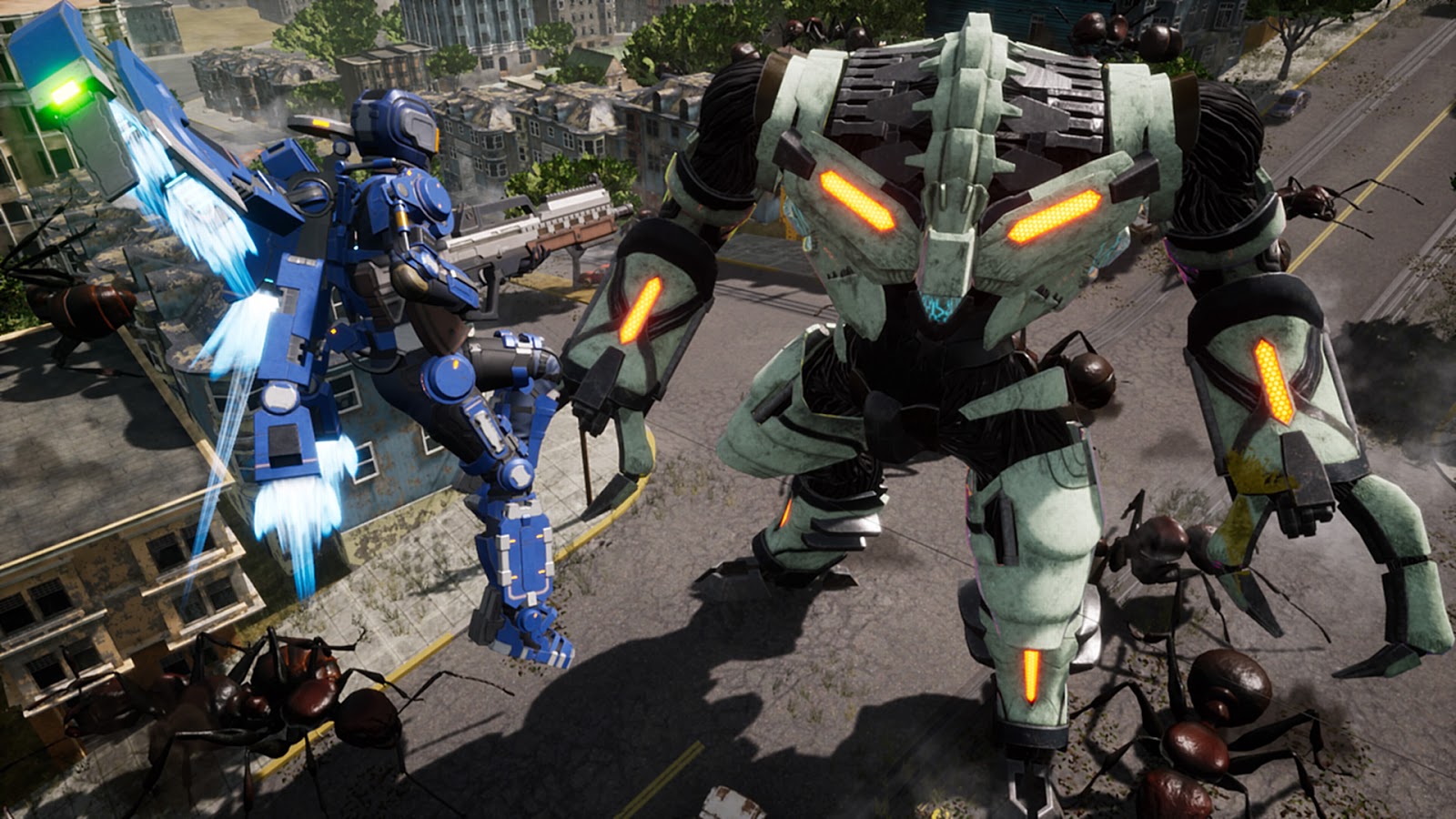 Those of us who have blasted a trail of Earthly justice in prior EDF installments can easily visualize the severe impact these reductions can have on the frantic yet overpowering gunplay the series has become admired for. However, to actually see Iron Rain stripped of these elements, well, I damn near orchestrated a plot to get myself dishonorably discharged from The Force. Miraculously, once I got my hands on the game and adventured through one-fourth of its online campaign, I developed a searing fondness and appreciation for its attempts to mechanically and aesthetically progress the EDF foundation. Even if, as a spinoff that’s reaching for wider Western appeal, it had to take a big step back to do so.

As an enlistee in EDF: Iron Rain, you live for one purpose: to defend our mother Earth from alien attack, while utilizing a selection of high tech weaponry to blow those bastards back. You begin your service by customizing the gender, look, and outfit of your soldier; choosing between one of three powered exoskeletons (a fourth is unlocked in the later missions), which determines the the abilities and weight limit of your soldier class; and selecting a loadout of guns, grenades, healing items, turrets, traps, battle vehicles, and air raids (these items affect your weight limit). Once you’re properly attired and locked and loaded, you’ll be prepared to deploy on a 52 mission campaign that will see you bombarding the Aggressors, war-bred extraterrestrials that consist of everything from Walmart-sized insects and arachnids to walking, skyscraper-esque battle stations.

While Iron Rain adheres to the same basic rules and principles of the primary EDF titles, it also strives to experiment with the formula by adding elements that will most likely become fundamental features in the series going forward. For example, each exoskeleton now comes equipped with useful energy move that’s unique to its class: the Trooper, the basic ground unit, can dash and dodge her way through and around enemies’ melee attacks and projectiles; the Jet Lifter, the airborne unit, can hover just beyond a swarms reach while thinning it out with rocket fire; the Heavy Striker, the bulky tank unit, can dual wield any weapon in the game and emit a forcefield that deflects projectiles and explosions; and the Prowl Rider, the extreme mobility unit, can dart around the battlefield at breakneck speeds by attaching grappling wires to terrain, buildings, and enemy bodies. Also, you are no longer fixed to a specific class for the duration of the campaign; you can change exoskeletons in between missions, allowing you to adapt to a stages’ specific dangers as you see fit. 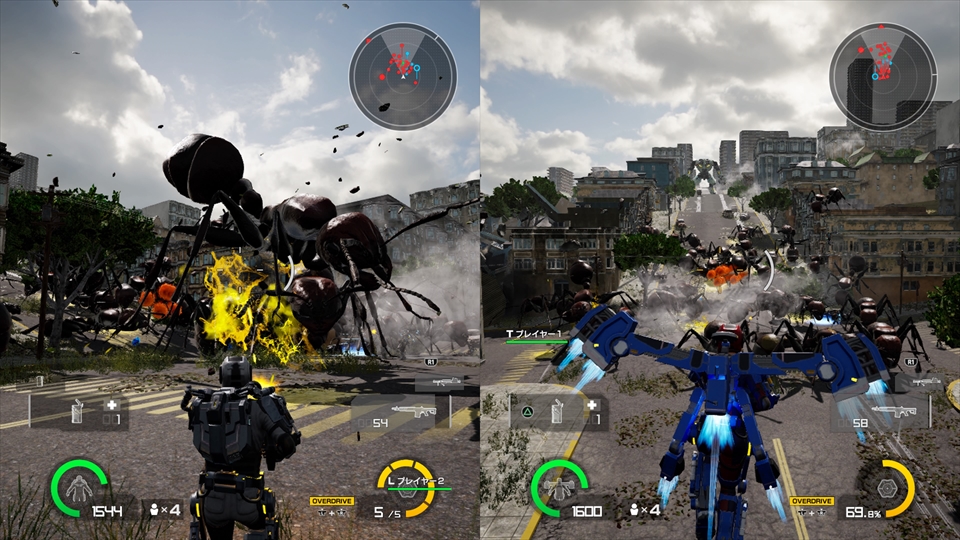 Some other additions to Iron Rain that make it unique to the main series include: an active reload system, which grants the opportunity to reload some weapons faster with a timed button press; down-the-sights aiming for certain weapons; enemies and weapons that deal and are weak to elemental damage; Overdrive, the ability to, for a limited time, imbue your exoskeleton with unbounded energy, increasing your firing rate and defense while granting the power to spam your energy move; a gem-based currency system for purchasing health increases, new weapons, items, and attire; the aforementioned character customization system; and, most noticeably, graphical detail beyond what any EDF title has yet managed.

Unfortunately, as stated earlier, the improved and relatively impressive jump in graphical quality did not come without major compromises. The enemy swarms in Iron Rain are not nearly as massive nor do they create the same awestruck sensation as the ones in EDF 5 or EDF 4.1. To address this flaw, your opposition is more aggressive and resilient, and the stages are much smaller and more thoroughly constructed, with buildings that give off a piercing feeling of verticality. However, this reduction in space creates a reduction in boundaries, meaning that you will either constantly dash or fly out of bounds while trying to escape a Kaiju’s area-of-effect butt slam, or be repeatedly juggled or knocked out of bounds by self-assured insects with a propensity to charge attack (an issue that becomes even more prevalent on harder difficulties).

Despite the disappointment I, as a veteran EDF trooper, endured at first glimpse of Earth Defense Force: Iron Rain in action, it soon grew into one of my favorite EDF games in the series, right behind EDF 4.1 and 5. And even with the reduction in the enormity of enemy swarms, it still offers the fun and frantic bug genocide that only the EDF really knows how to provide. Now, not all fans or newcomers will value the compromises Iron Rain makes; however, it cannot be denied that this spinoff was a necessity. In time, it may prove to be filled with a lot of great ideas that progress this underappreciated franchise in profound directions.