The RPG / strategy genre is arguably my favorite, dating all the way back to the Sega Genesis. To that end, Fell Seal: Arbiter’s Mark is a glorious love letter to games like Fire Emblem, Final Fantasy Tactics, Warsong and Tactics Ogre to name a few of my favorites. The narrative has a few puzzling moments here and there along the way, but overall the story and the tactical gameplay come together to create a memorable experience.

While Fell Seal: Arbiter’s Mark is a fantasy title, almost immediately we are introduced to a story that is certainly a bit darker than the old school titles I mentioned above. This is a tale rife with bloodshed and political intrigue as our primary character, Kyrie, is a newly Arbiter who has a duty to investigate matters such as the murder that takes place right out of the gates. The thing is, it becomes quickly apparent to Kyrie that there is more going on here that meets the eye as the matter becomes a more politically driven story.

The visual style is interesting, but overall I am a big fan of how it looks. It leverages a bright, hand-drawn aesthetic that looks nostalgic without settling for over-pixilated. The number of customization options (and there are loads of them) in the character creation process are well-represented on the character designs. There are many aspects of Fell Seal: Arbiter’s Mark that call back to the Final Fantasy Tactics games, including its 2/3 overhead, isometric view. If there is a quibble with this perspective, it is that I never found a way to spin the camera, which can be somewhat annoying if you are trying to line up attacks and see what / who is around the corner. That being said, I like the tall, more elegant-looking character designs than what we often see from this genre. I will say that as charming and distinctive as I found the visuals, the audio was perfectly suitable if somewhat forgettable. Some of my favorite video game soundtracks have come from this genre, where you tend to spend a lot of time on the same screen crawling through expansive battles, and while the music in Fell Seal: Arbiter’s Mark was never bad, it is not going to be remembered as one of my favorites, either. 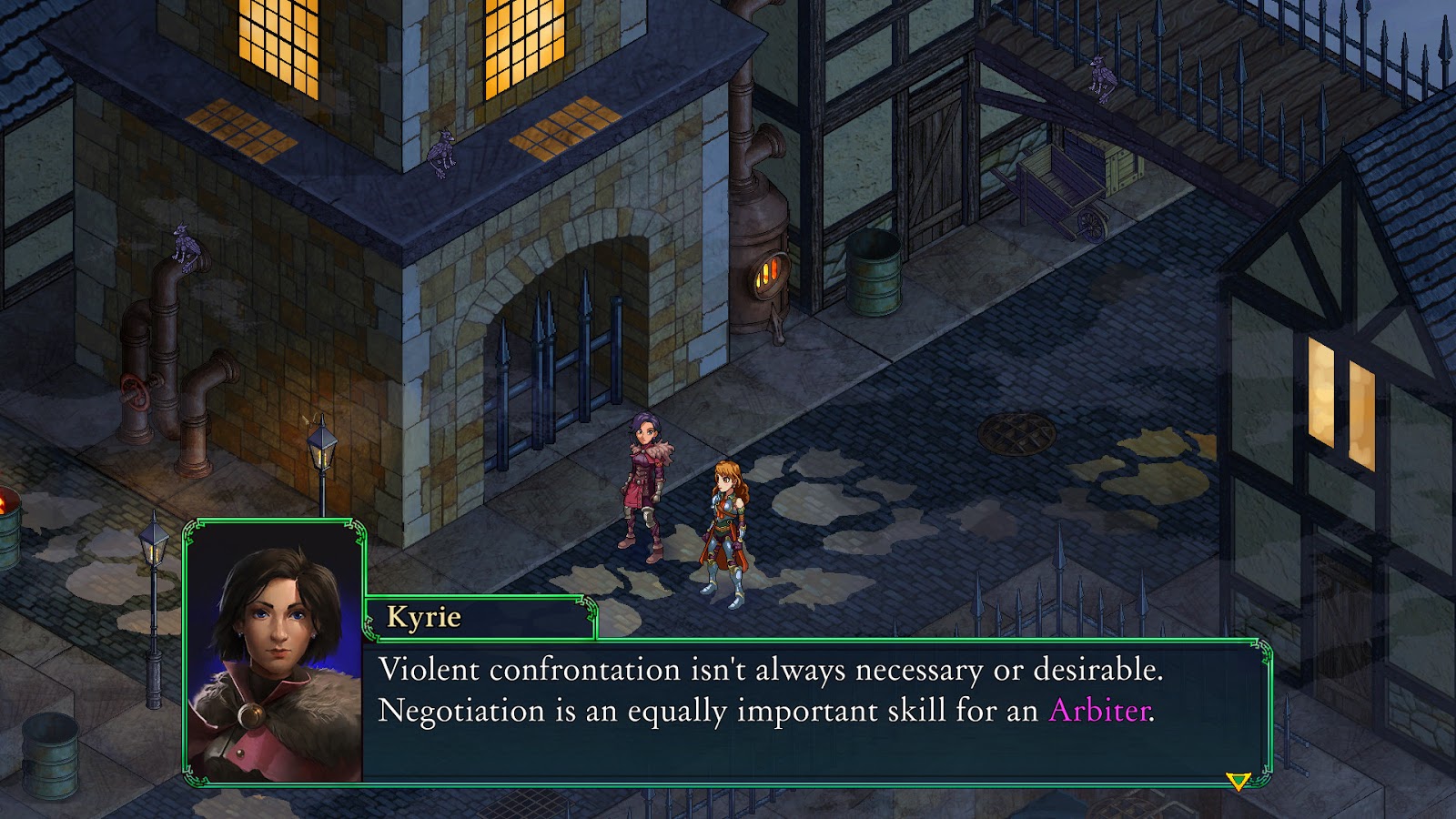 Speaking earlier of the character customization – there are a plethora of options available here. For those who just want to get into the action, hit the randomize button a few times until you settle on a design you like. For people like me who have a metric ton of characters in my head over decades of video game and tabletop gaming to draw from, I had a lot of fun fleshing out my characters here. A lot of fun – and honestly a lot of time spent doing so.

Games like Warsong and Fire Emblem have been notorious for their difficulties, and while Fell Seal: Arbiter’s Mark is not quite to that level of challenge, it is pretty easy to get caught making mistakes that the AI is more than willing to take advantage of. While the developers clearly have respect for those aforementioned games that came before this one, that is not to say they brought no new ideas to the table. One of the most interesting is the penalty system for characters falling in combat. While less severe than Fire Emblem’s permanent removal of the character from your roster, Fell Seal: Arbiter’s Mark goes a slightly different rout in having that character acquire an injury. You can choose to try and plow through that injury, but the character will be doing so at diminished capacity. Or you can choose to rest the character, but obviously then you need someone new in your lineup during that time. Oh, and if an injured character falls in battle again while injured – which is increasingly likely given their diminished state – then they need an additional day to rest and get over their wounds.

Combat is what I think most people would expect from this type of turn-based game. Your units try to attain favorable positions so they can successfully trade blows with AI opponents on the way to clearing the map or reaching a specified objective. There is a bit of a grind to be had here, but similar to other tactics games that give you access to maps you have previously beaten, you can revisit those stages and smack around those enemies again for some more experience. It is also a welcome quality of life item that your new hires over time (useful if you are resting characters due to injury) start at higher levels that better reflect where your party is currently at, and not just starting at level one and forcing you to grind them some levels. 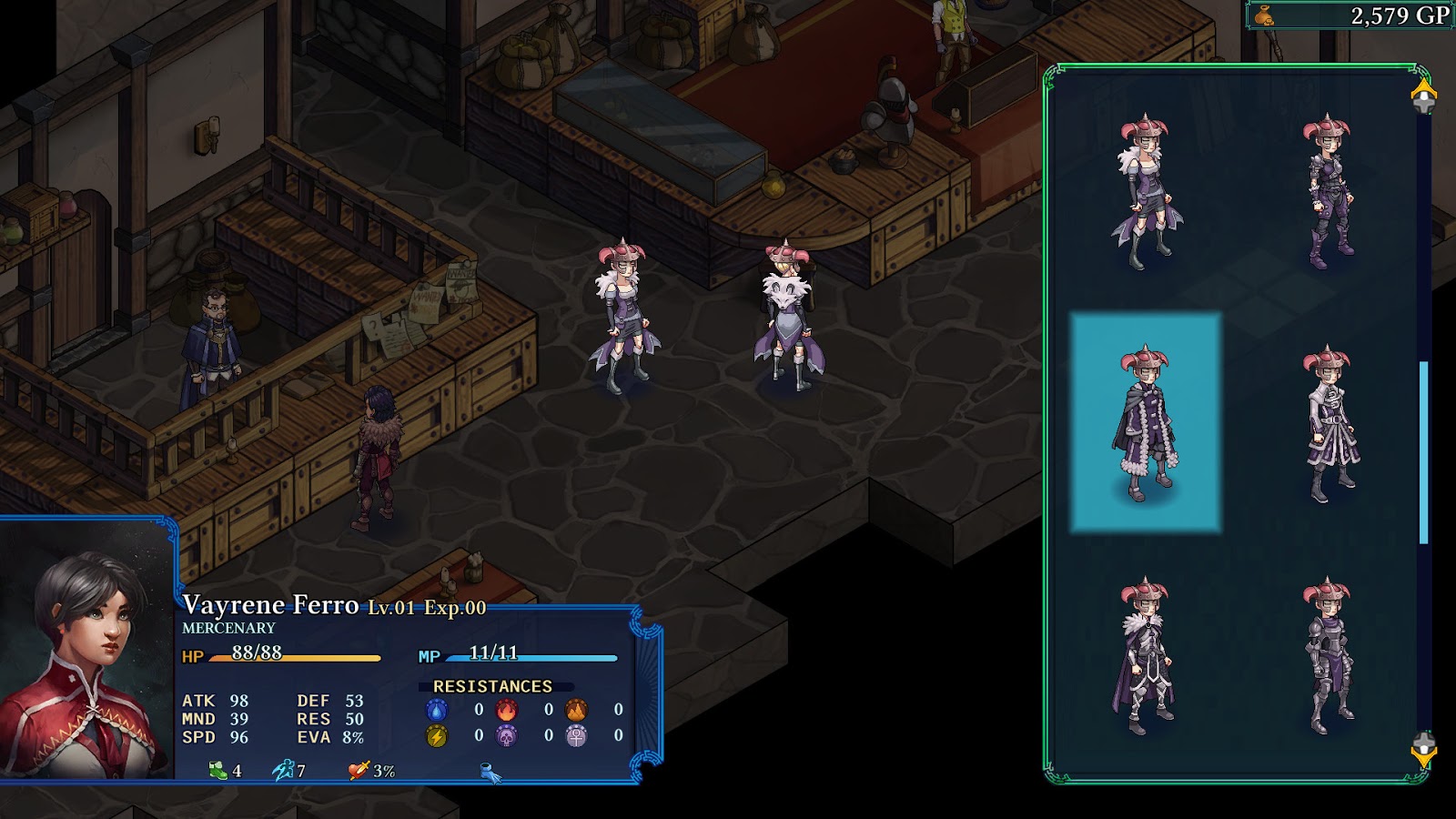 Character progression is one of the greater strengths here as well, as there are numerous ways to grow your characters, from active to passive skills. Experimenting with these different jobs and characters was one of the most entertaining parts of the game and lends itself to a solid sense of progress. There is a lot of text here, and the game certainly has an intentional, slower pacing that may not sit well with everyone, but I enjoyed it all the same. Despite this, it is fair to say that I wish the game was a bit longer, and had a little more meat on its bones. If this title is the success that it should be, my hope is that we will see more of this world courtesy of 6 Eyes Studio sooner than later.

Excellent visuals, a well-thought out system of combat and character progression compliment a mostly good if sometimes inconsistent story to make Fell Seal: Arbiter's Mark one of the most entertaining strategy games I have played in some time. There is room for improvement in a few areas, but the overall package is certainly an impressive, enjoyable one that I can easily recommend to fans of the genre.