Stellaris: Console Edition is a very acceptable port of a genre that one would think would not work on a console. Given the intricacies and ultimate reliance on menu navigation within a 4X or Grand Strategy title, the general thought process was “Really? On console?” Fortunately, Paradox and Tantalus have managed to make a menu navigation relatively painless, plus the more I play strategy games on console the more I realize that screen navigation with analog sticks are not entirely horrible, in fact, with Stellaris, I think it really shows that the genre could flourish on consoles.

Stellaris, for those unaware, is massive in its ambitions and scale; easily the largest in years with regard to your ability to fine tweak your government options during setup to the Policies and Edicts you select (or research) while playing the actual game. With the level of depth one might be concerned with the accessibility of Stellaris but it is actually quite easy to get into as a new user; the help options are deep, well written/voiced, and easily point new players to new features, ideas, or concepts within the massive empire builder game.

Veteran fans, more specifically those of us that have the PC version of Stellaris, might be a bit taken aback about the version that the console edition launched at. Whereas the PC version, as of time of this writing, is 2.2 to 2.3, the Console Edition launched at version 1.7. The reasoning behind the varied versions and not launching at the latest is, according to Paradox, related to start of development dates; development for the console version started during the 1.7 PC lifespan and that is where the branches split. However, it should be noted that they are working towards releasing updates to bring it current/in line with the PC version; it is just a matter of hunkering down and waiting for any updates. 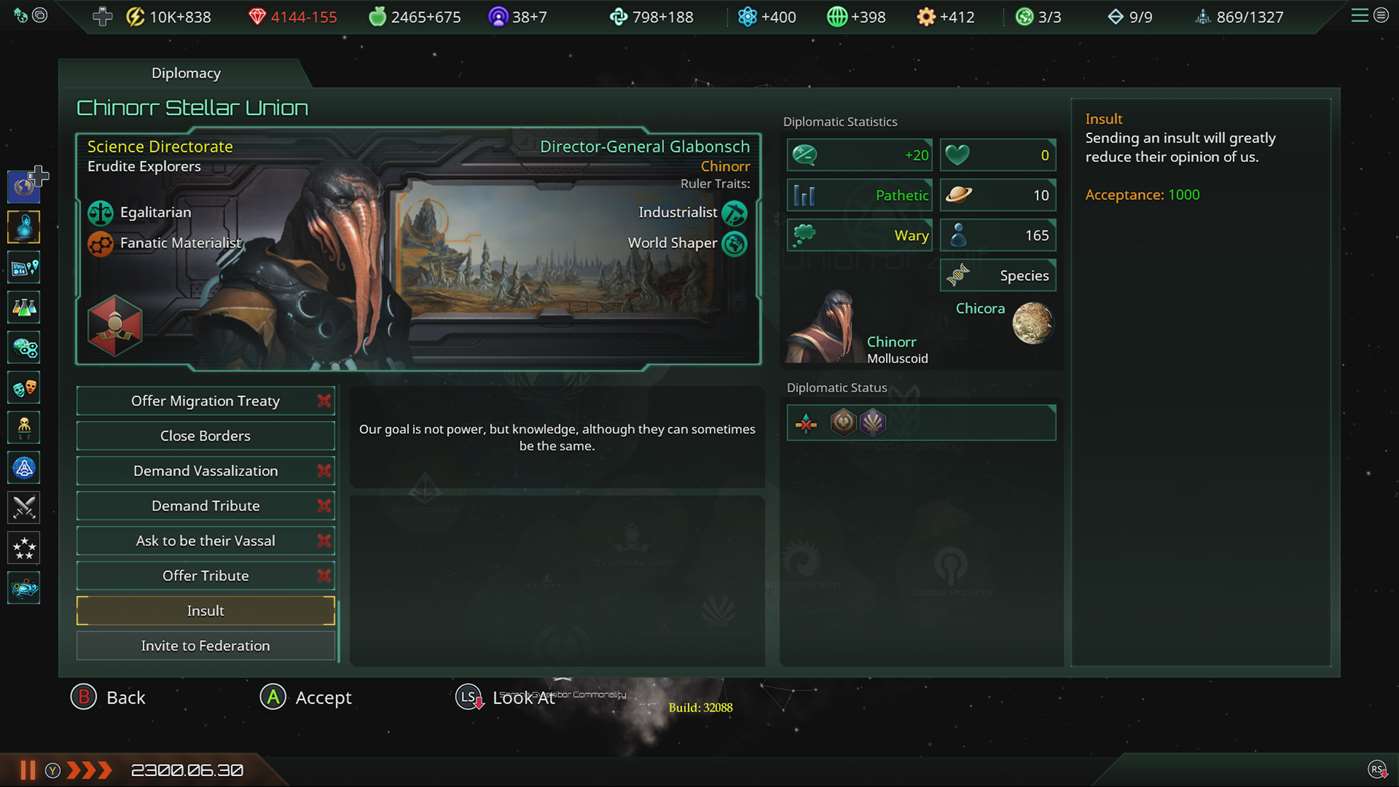 Stellaris is a game about telling stories, though not in the same vein as those told in a traditional sense, where a game puts forth an arc or sub-chapter surrounding a primary plot point. Instead it is a deft combination of the player telling their story of conquering the galaxy (primary arc) dotted with dozens of small, interesting stories (sub-chapter arcs). The player is largely in charge of how they go about telling their story; from using the Federation function to fold others into their empire to all-out galactic war.

The smaller stories though, are handled via Research projects that your science vessels will come across as they scan new systems. Some of these can be as simple as finding out that there was an ancient civilization that ended its own existence via nuclear war to far, far more intricate (and interesting) Research projects following precursor civilizations through their histories, leading up to extinction or survival.

These little stories, though scripted, have a certain … sense … about them that really bring them to life while simultaneously being a sobering element on the excitement that comes from expanding through the stars. Research projects are not the only source of stories as each fleet engagement can result in its own small and more personal story, though it is one told more by the player (as the primary arc is) and less by the game. 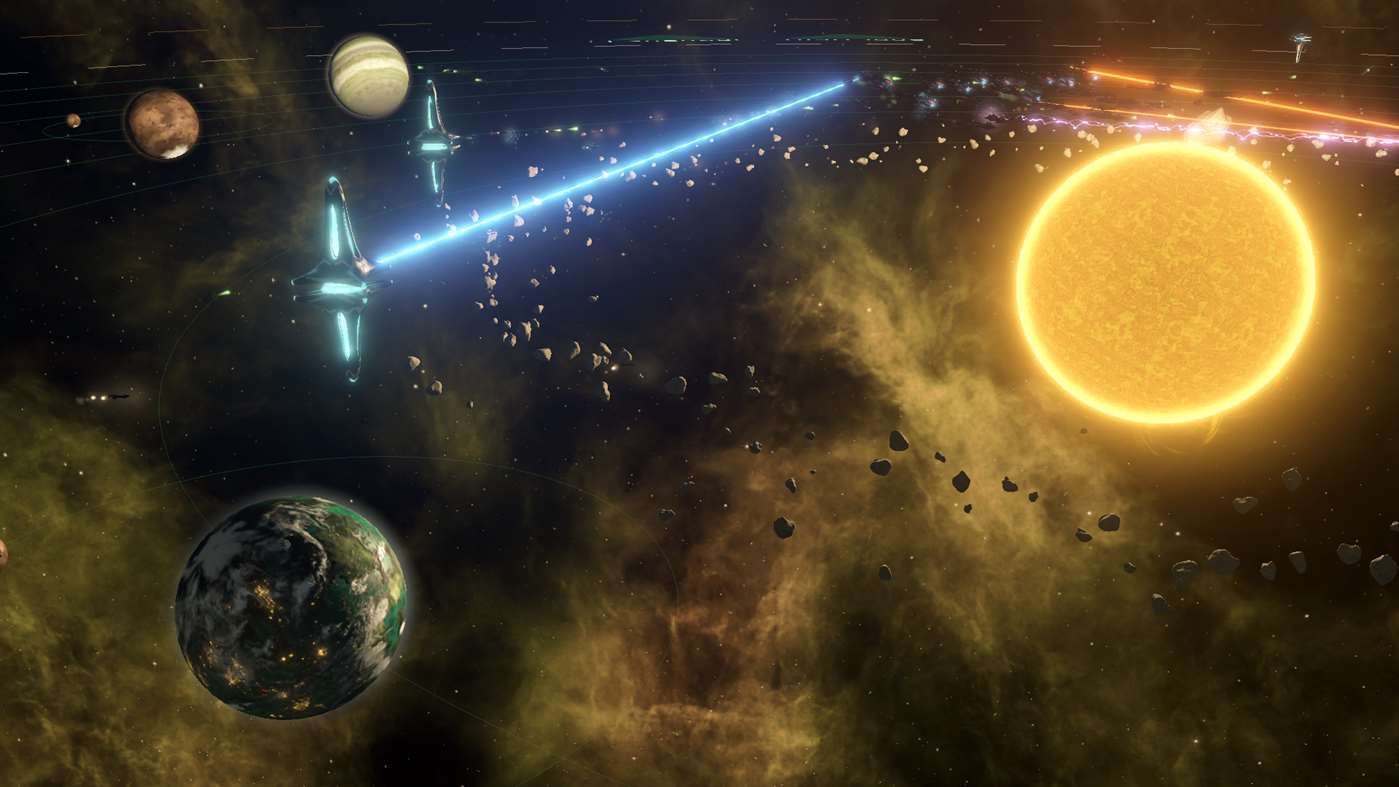 As an example, I had the System Defense Fleet, a small fleet that started off with just a handful of corvettes and grew to a massive armada full of every ship available. The SDF worked primarily as a local defense fleet, never leaving the borders of my galactic property but instead focusing solely on the defense of our colonies. Over the course of my 40+ hour game this fleet survived longest, was pushed hardest, and often came down to being one of the last fleets (sometimes THE last fleet) that stood between certain defeat and survival.

I like to envision that its fleet commander is a tired old Admiral, sent back from the front-lines and had risen through the ranks largely because they simply survived. From there he began collecting his band of misfits, being handed the “junk of the fleet” with random ship commanders and loadouts, only to end up coming to humanity’s defense time and time again and winning out. As of my last log in, the SDF was still going strong as they held orbit over Pandora Prime, their staging area near the core of my galactic empire. Each of my fleets, in some way, hold stories similar. With these types of stories comes attachment, meaning I am far more critical of how I use them in combat, how willing I am to let them die, and how far I am willing to push them.

These little off-script stories are made more intimate due to the level of ship customization allowed in Stellaris. Rather than predefined units and a simple tech tree, Stellaris allows you to research various technologies (assuming they come up in the random research queue) that will see you research cruisers, carriers, or new science vessels, each with their own potential loadouts. Once you research the core ship you can research new weapons technologies, from missiles to alien tech (like the void lightning!), to upgraded lasers. Then you can head on over to the Ship Designer to well … design ships! 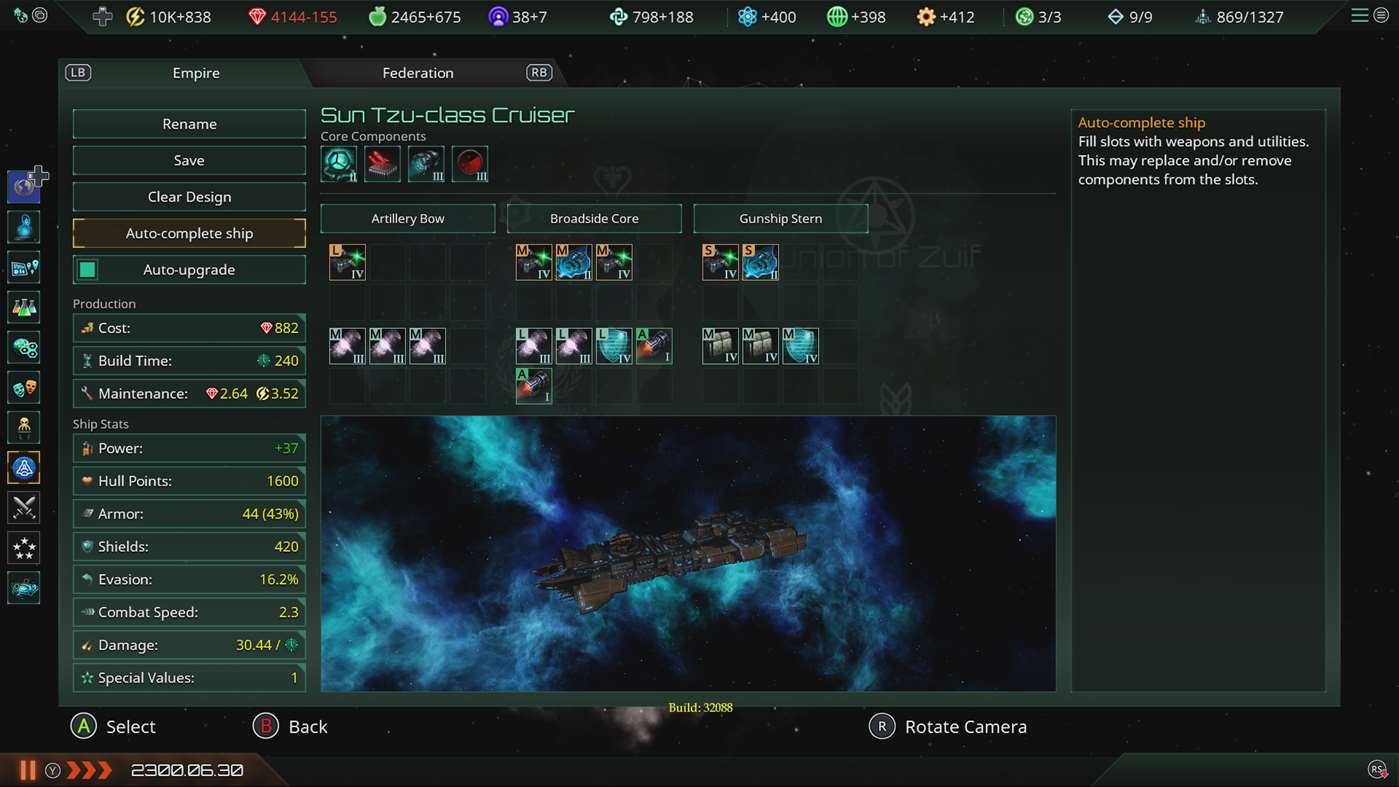 Though it might be tempting to simply auto-complete and put the strongest weapons or armor/shields on your ships, it may not necessarily be the smartest thing to do. Each encounter will be different and though there is a place for “ships of the line” (i.e. heavily armed and armored tugs that rush to the front and work to hold the line against a station or fleet), there are also a need for more hit-and-run style light ships, or picket ships to defend against oncoming missile fire. Carriers and artillery-like ships also have their place in an armada, so variation is strongly recommended in your fleet loadouts.

If there was anything I really do not like about anything related to the fleets in Stellaris, it would be how combat looks. Even fleet-to-fleet engagements tend to fall into a “let’s fly in circles.” If you zoom in on a fight you will see ships flying in circles and in later parts of the game, they tend to be super boring, which is a shame because I would love to see ships squaring off in broadsiding, or artillery ships forming their lines and holding while they put the hurt down-range. Carriers that work to flank at range would be slow-moving and push to the extremes of range while sending strike craft/bombers out one sorties. Corvettes, frigates, or strike cruisers, ships designed for speed, should move in fast in an erratic fashion, strike, and move past their target (for non-stationary targets this mechanic would make for some spectacular dogfight-like scenarios). Instead everything just … flies in circles. Like I said, it can be pretty boring. 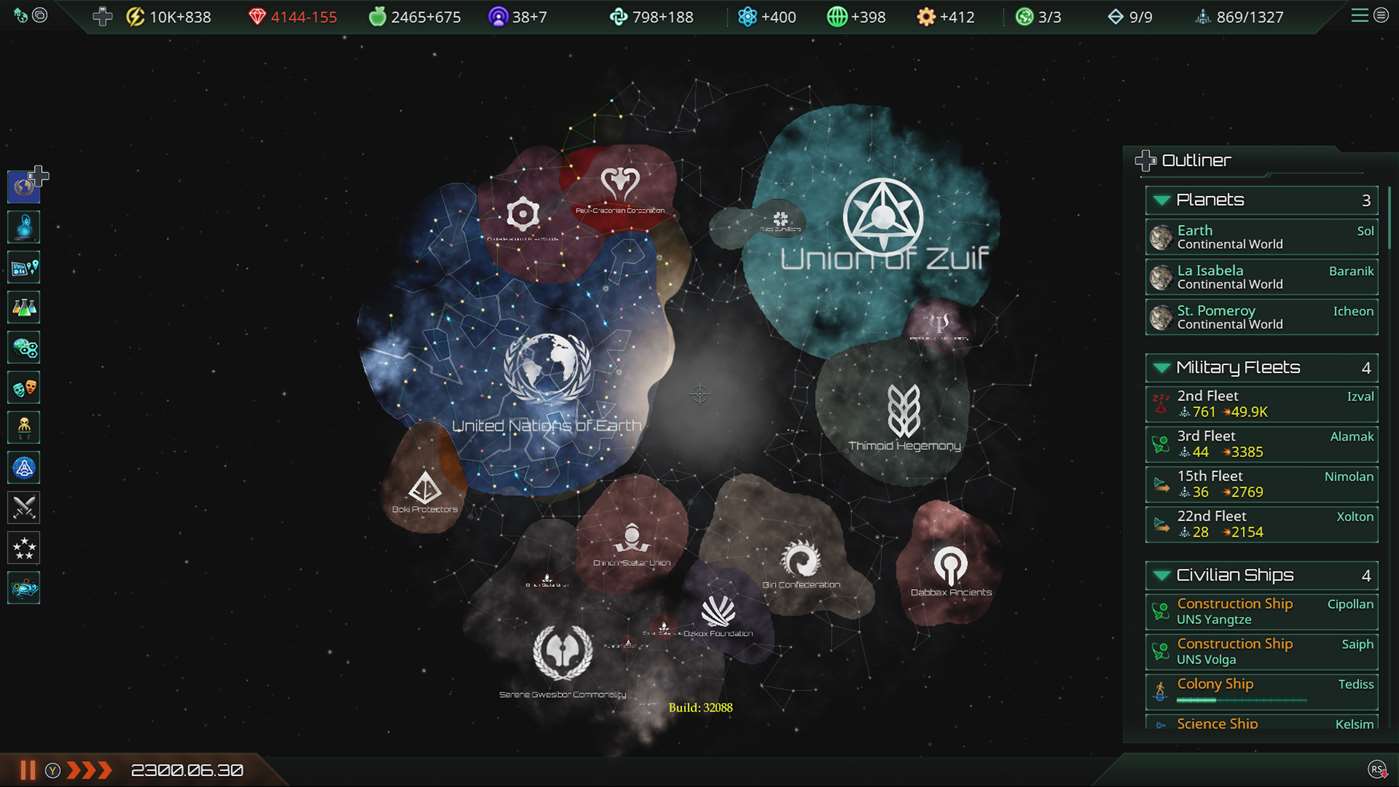 Stellaris is not a game to take lightly nor is it designed to be played in short bursts. Given the complexity of the famed 4x, Stellaris is a title that you will spend an afternoon, evening, and maybe even early morning playing … all in a single sitting. The cosmic array of minute stories are enough to keep you going for hours and if you mix in the small, more personal stories written by your vessels, you have content for days. To compliment the storytelling found in Stellaris are the graphics; though you may find yourself spending the lion’s share of your time in the galactic map, Stellaris is finely detailed all the way down to each individual ship or craft. The best part? Paradox made it work all on a console, a piece of hardware not generally thought to be suitable for epic strategy titles like Stellaris.

Given the countless possibilities within each campaign of Stellaris: Console Edition, I foresee it reigning supreme as the pivotal example of how to bring strategy to consoles. Well done Paradox.