You are reading
Atelier Lulua: Scion of Arland – PS4 Review

Now here’s a series I’ve been following since back on the PS2. The Atelier games have been around since 1997 and are produced by the Gust Corporation. These games are primarily on the PlayStation system, but have been ported to other handhelds and consoles throughout the years. From time to time these games tend to go on a roller coaster of change from title to title. Some ups…. And some downs. Luckily this time around Atelier Lulua is doing something right.

The Atelier series has now released its 20th mothership title on the PS4, known as Atelier Lulua: Scion of Arland. Surprisingly, Lulua falls under the alchemist of Arland storyline, making it the 4th part of the adventure. One of my favorite trilogy back in the day, I’m excited to see its roots return.

Our adventure centers on a young girl dreaming of becoming the next best alchemist. Her name is Elmerulia Frixell, the daughter of Rorona who was the original Protagonist of the first Arland game. Lulua is spirited just like her mother and aspires to be as great as her. She lives in the village of Arklys and is being mentored by another traveling alchemist named Piana, a previous character from Atelier Totori. Now older and more independent she takes the time to teach Lulua the basics of being an alchemist while her mother is away.

One day after returning from a small gathering excursion a mysterious book falls out of the sky and almost knocks out poor Lulua in the process. This book is called the “Alchemyriddle” and only Lulua can read it. As she ponders on the mystery of this mystical book a letter arrives at her home, addressed to her mother. It reads that if Rorona doesn’t renew her alchemy license soon she will lose her permit and workshop (sound familiar…?) Worried for her mother Lulua bucks up the courage to travel all the way to her mothers homeland, Arland, to fix her mistakes. With the aid of her fiends and mentor she ventures through past storylines to become an ace alchemist. 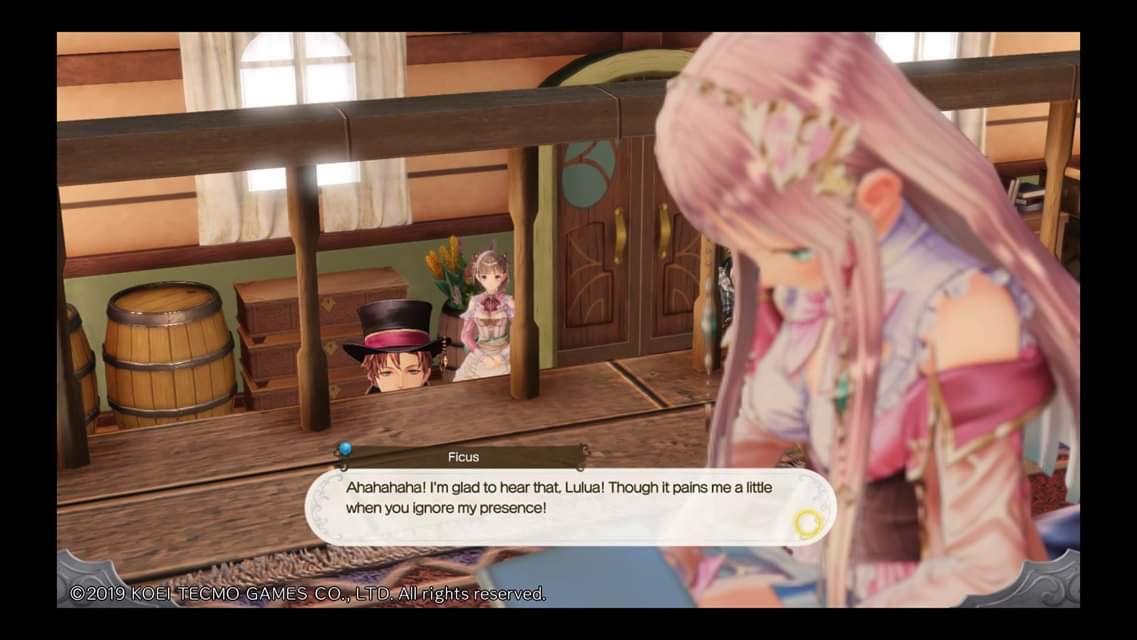 This game is beautiful with large landscapes and flavorful characters. Making each place and person unique in their own way. No two things are the same. I’ve always been attracted to the art style of this series and its definitely one point that they never falter on. It’s also a nice touch to see past characters and areas, giving long time fans a huge wave of nostalgia. Even the music has been revamped from past games, giving every piece a new little jingle while keeping the score mostly the same.

Like past generations the gameplay has stayed relatively the same, with a few new and old modifications here and there. The main focus of the game is alchemy, so put on your best boots and grab that cauldron ladle because you will be exploring for materials and synthesizing them. Finding the many different ingredients is half the fun as crafting new items with them and there are multiple ways of doing so, either through exploration, shopping or hunting monsters. I found it very helpful how they made tracking the materials on different fields displayed on the world map, helping you keep track of what you’ve found and what percentage is still missing. Some materials may require you to return at a different time or the use of a specific tool. Once you’ve had your fill of gathering it’s time to return to your workshop and begin synthesizing. 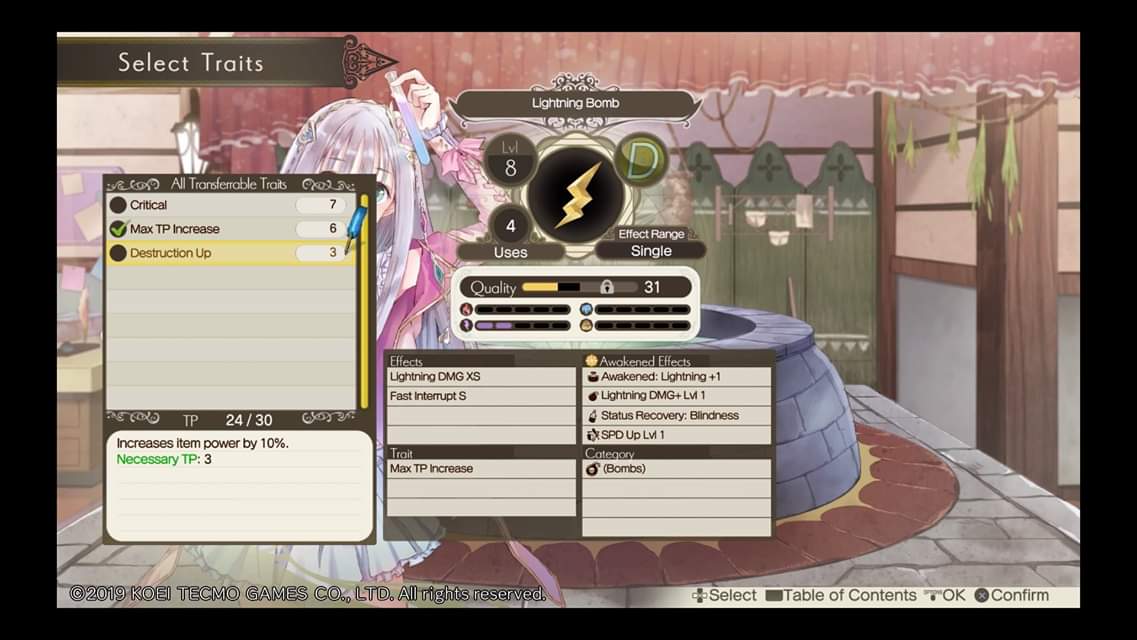 To synthesize anything you’ll be needing a recipe. In Atelier Lulua your “Alchemyriddle” will be your main source of these recipes, but you can also obtain recipes from chests or shopping. Once you have the recipe available you can start crafting your items. Each item is different and have many usable materials to choose from, but they all have three major components to focus on: quality rating, elemental attributes and transferable traits. On the subject of elemental attributes there are 4 primary elements to fuse with: water, fire, earth and lightning. Each item will display which element they harbour and how powerful it is. The more you combine materials that have the same elemental type the higher the chance you have at gaining new property effect, such as increase in power or healing.

Material can also hold traits, which you can read in their description box. If you combine three material that hold, for example: cheap cost, poison enemy and +3 to healing you may be able to transfer all these traits into the new item you’ve crafted, but be aware that there is a limit to how many you can have on one item depending on how high your trait points are.

Every time you synthesize an item you’ll gain alchemy experience points, which will help you level up, giving you access to create higher leveled items and also raise the amount of trait points you hold.

The Atelier series has always been keen on a time management function. Sometimes it makes things run smoothly, other times I feel rushed like there aren’t enough days in a year and when you have assignments due on certain dates it can make the play through a lot more jarring. This tends to result in me getting game overs or bad endings, it’s quite frustrating. However, in Lulua the calendar system is more tamed. Time has not been an issue and I haven’t run into any set backs with the plot. I feel like the game is giving me a generous amount of time to explore and create. 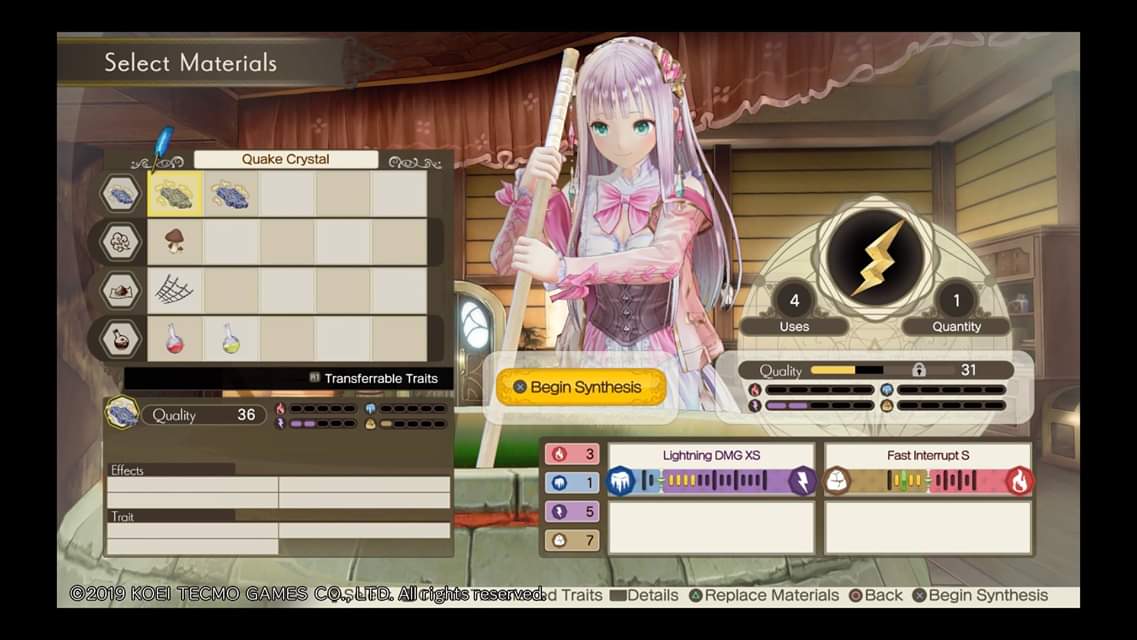 This book can be a tricky little devil when it comes to unlocking new recipes, skills or locations. It’s split into two parts: Main story events and Sub-events. When it comes to the Main story the book will automatically guide you along each step you proceed through. That part is fairly easy, but the Sub-events take a bit more time and effort. When you flip your book open to these events you’ll see the page is labeled “Basic” task. It will require you to either explore, discover, battle or create in order to unlock the next step. Once you’ve unlock these “hints” you’ll be able to decipher the page. Deciphering can only be done in your workshop, but once you’ve read through all your findings something new will be at your disposal. Upon completing all of the basic tasks, the “Advanced” task will become available. The process is exactly the same, but it’ll will be more challenging. In exchange you’ll receive better rewards and even experience towards your character.

Combat has always gone through changes throughout the series. This time around it seems their goal was to simplify every aspect of the game, even combat. Turn based is still strongly in effect, always a favorite of mine. When it’s your characters turn your battle menu will appear with the following options: Attack, Skills, Item (for the alchemist member only), Guard and Swap.

Attacking is pretty straight forward, but skills are gained through leveling up or deciphering pages in the Alchemyriddle. Items are anything from bombs, healing potion and/or stat buffs or de-buffs. Don’t feel like taking the enemies next blow? Then guarding is PERFECT for you! 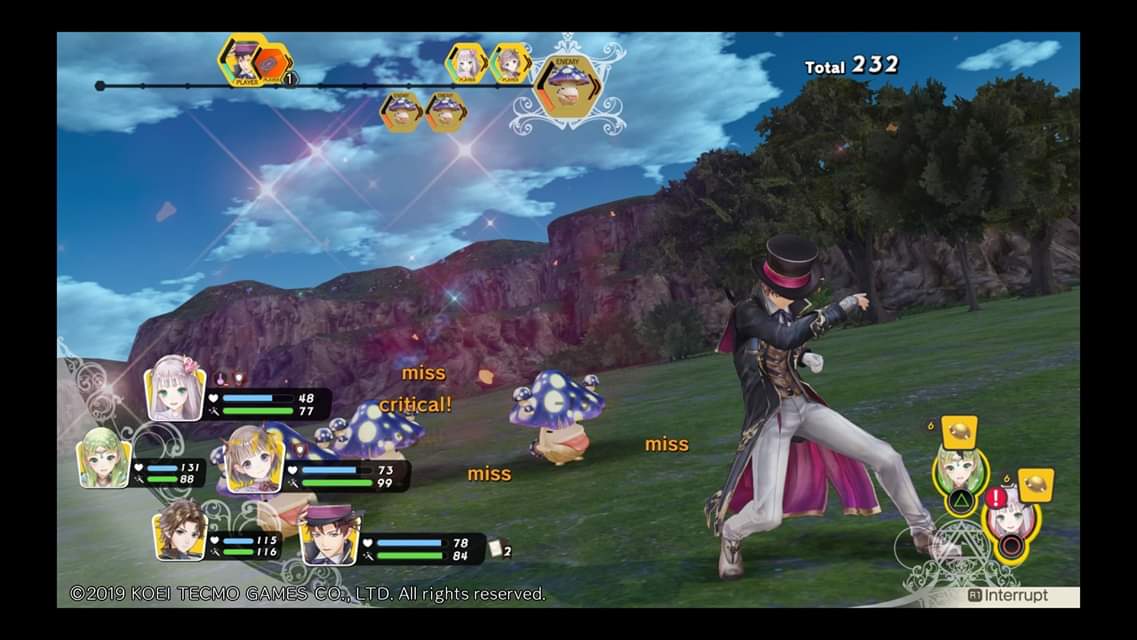 You’ll always have three party members during a fight and can swap team mates at any time, even when someone is down. Swapping allows you to switch between stand-by party members, but these characters can also be of aid to you. If you choose to hit the enemy with a skill attack your back-up party member will carry out a follow up attack to support you. They can even increase your defense stats if you choose to block an enemy attack. It’s a win-win all around.

Be wary of your opponents strength, they have the ability to stun your characters, but you can also give them the same treatment. When that happens your next attack will be a critical so it’s good to crack out your best items or skills. It’s always smart to be prepared before you go out into the fields or dungeons. Enemies can get surprisingly strong without notice and if you are surrounded you’ll lose the battle fast. Any time you experience a party death you’ll be sent back to the workshop and half the material that you collected will be lost. So make sure to be prepare.

Questing Remember how you can take on quests to gain some extra money? Whelp, that’s still around. Quests can be done at any time and are a great way to stock up on some cash. You can choose to do three types of quests: fighting, crafting and gathering. Next to each job is a meter that shows you what is an acceptable condition on finishing the job. Pass that first goal and you get your earnings. Go above and beyond that and you’ll find that your coin purse is a lot heavier and your items are even rarer. 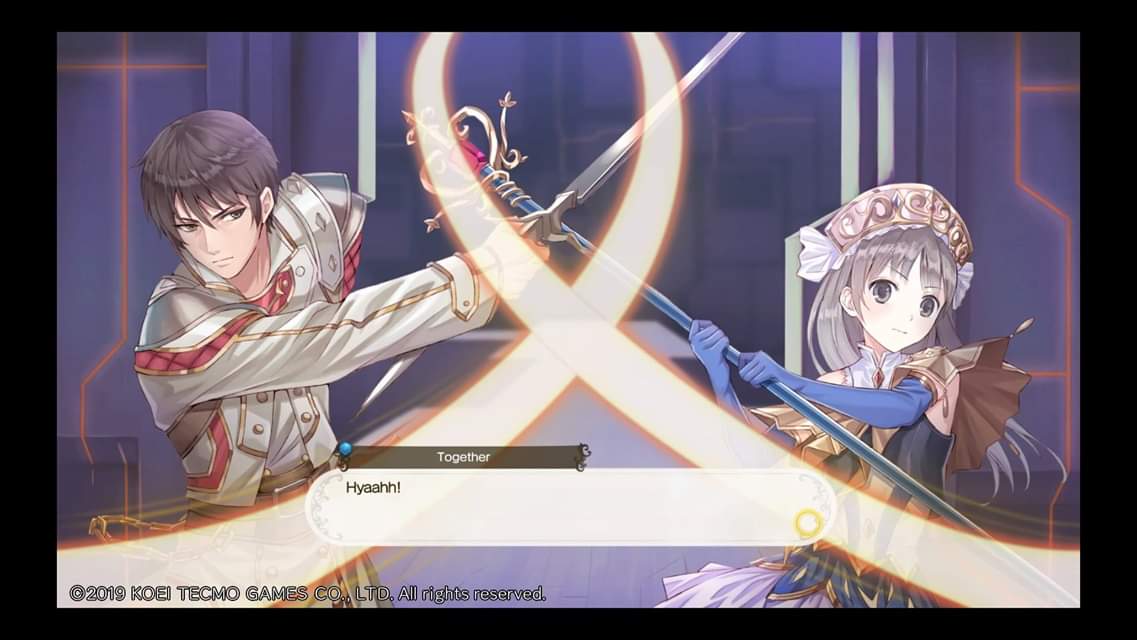 This series has continued to be adorable as ever with its cute character and querky moments. One of the funnier points I find in the game is the Jack-in-the-box, pop out of nowhere, jokes they seem to be throwing around. It cracks me up every time. Or the Over-the-hedge, hide behind objects, stare… It just makes these scenes a little more humorous.

Music and art style is always a blessing from this series. Never making you feel like they ever fall flat or get to lazy in that department.

Combat and alchemy are fun and addicting as ever. I always have to keep telling myself ‘Just one more excursion’ or ‘After this synthesis I’ll take a break’… Then I’ll look at the clock and realize I said those things 2 hours ago. I can’t seem to put this game down. Honestly, Lulua is a nice change from the… Last installment of the series.

Now, does this game have faults? Yes! But only minor ones in my opinion. For me it was the lack of an English voice cast. The last game, Atelier Lydie and Suelle, was also missing an English recording. Don’t get me wrong I’ll play games in any language, but it’s strange for a series like Atelier, that’s been around for so long, to suddenly stop bothering with it. I’m extra surprised they didn’t try for Atelier Lulua since it brings in old characters that have been voiced before…I find it bizarre and it’s something that I noticed.

The other irk is the DLC characters. I don’t like the idea of having to pay for key characters, like Totori and Meruru, when they’re mentioned and shown in the main storyline. I find that to be a bit of a low blow, which makes the game feel incomplete. 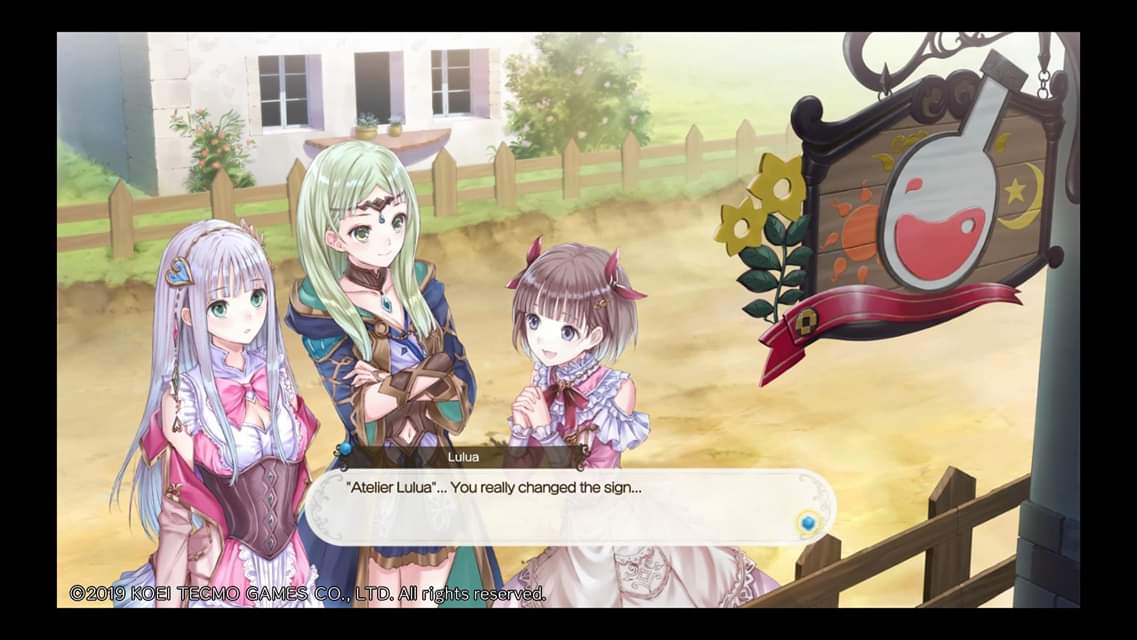 Atelier Lulua is a great game. Cruising through the story at a great pace and never tripping over my own feet to understand the gameplay. If I had to describe this game in one word it would be "Simplicity", as it does a wonderful job of guiding you through each and every new and old discoveries. I'm glad to be able to experience a 4th part to the Arland storyline. It's fun for long time fans to enjoy and easy enough to grasp for newcomers. I'm giving this game a 9 out of 10 for being nostalgic and playful.