Los Angeles, CA (June 13, 2019) – Netmarble has announced “A Brand New Day,” the second song available from the BTS WORLD original soundtrack, will be released on June 14 at 2 am PDT/6 pm KST.

“A Brand New Day” is an electronic hip-hop song by j-hope and V, which features Zara Larsson, a next generation pop star from Sweden. The song was produced by British hip-hop electronic music producer and beat maker Mura Masa.

Mura Masa’s unique beat and sound of East Asian musical instrumentation offer a bold and harmonious feeling in the song. The Korean traditional musical instrument daegeum leads the song, highlighting the most Korean yet trendy sound, and the combination of Eastern and Western vocals create perfect harmony.

With the new song, Netmarble opened BTS WORLD’s “Another Story,” in which each member of BTS appears as the main character, through its official website. Two stories of RM and Jin were opened on June 10 and 12, and more stories of other members will come sequentially.

Netmarble is also revealing a preview of text messaging with BTS members, which is one of the main interactive content components of the game, through the BTS WORLD website. The reactions of BTS members vary by responses selected by the players, and their individual characteristics can be seen through how they react.

The game will be released worldwide (excluding some countries) for iOS and Android devices. For more information on BTS WORLD, please visit https://btsw.netmarble.com. The latest updates are also available by following BTS WORLD on Twitter and Instagram. 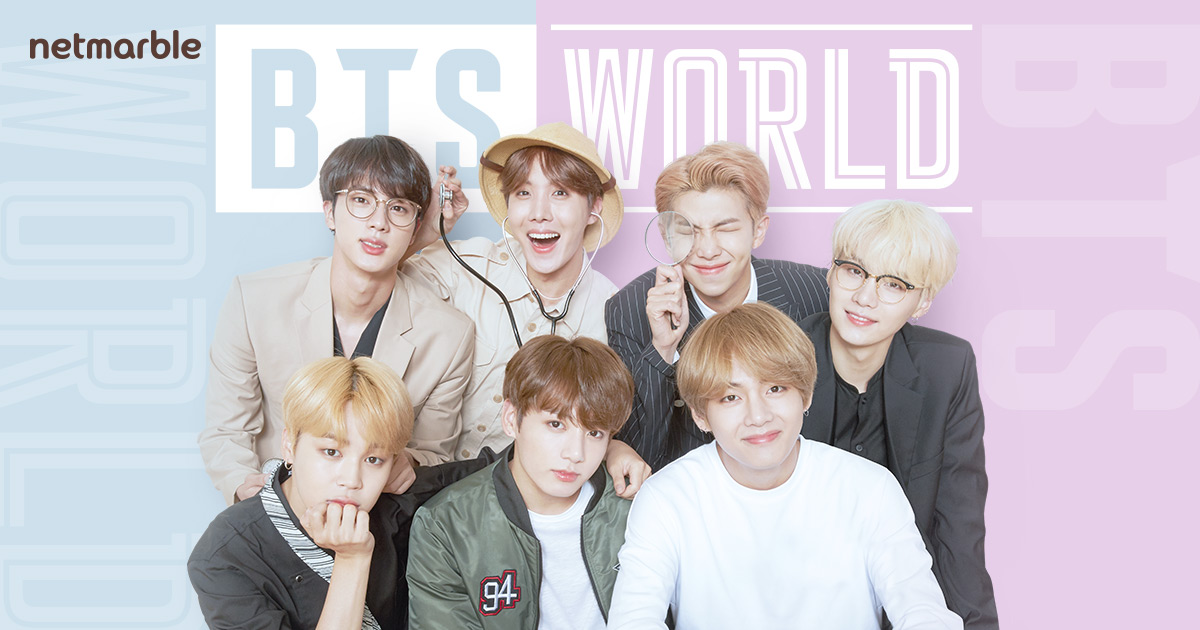 Netmarble Corporation strives to entertain audiences of all ages around the world by providing great mobile gaming experiences. Established in Korea in 2000, Netmarble is one of the fastest-growing mobile game companies and consistently ranks as a top mobile developer and publisher worldwide. With more than 6,000 employees, Netmarble has been producing and servicing some of the most successful mobile games including Lineage 2: Revolution, Blade & Soul Revolution, MARVEL Future Fight, Everybody’s Marble, and Seven Knights. As a parent company to Kabam, a top mobile game developer in massively multiplayer free-to-play games, and the largest shareholder to Jam City, a leading casual social game developer, Netmarble has a strategic partnership with CJ ENM Corporation, Asia’s largest entertainment company, Tencent Holdings, Asia’s largest internet company, and NCsoft, a prominent MMORPG company. More information can be found at http://company.netmarble.com

Founded in February 2005 in South Korea by CEO and Producer Bang Si-Hyuk, Big Hit Entertainment’s core business focuses on music production, artist management and publishing. Big Hit’s business ventures incorporate and develop a range of content produced from top-notch artists’ IP, including global boy band BTS and its newest addition TOMORROW X TOGETHER. With its mission of ‘Music & Artist for Healing’, Big Hit strives to impart a positive influence through content while providing comfort and inspiration to music fans worldwide.

Takeone Company Corp. is an innovative content company that utilizes pop-culture within a gaming environment. Established in 2016, Takeone is leading the new genre of mobile games called ‘Cinematic Games’ that combines interactive game elements within a story concept based on both pop-culture and original IP’s.  The games include full motion videos and various visual contents that push the boundaries of next-generation storytelling.  Years of experience and knowledge in both storytelling and game development have led to the creation of cinematic games such as Take Urban, BTS WORLD.  Takeone is currently developing a series of future cinematic games for their next up and coming titles.  For more information, please refer to www.takeonecompany.com.