Rebel Galaxy Outlaw is the pseudo-prequel to 2015’s Rebel Galaxy and is an absolutely stellar example of franchise evolution and studio growth. With few true faults, Rebel Galaxy Outlaw has firmly cemented itself in the Game of the Year running, with its phenomenal sound design, spectacular flight model, gorgeous visuals, and massive array of objectives which include an excellent story. Though it might throw a bit too much shade at other franchises at times, it is still a wonderful romp in a space-western-meets-space-simulator game that pulls out all the stops. Well done, Double Damage Studios, well done indeed.

While I may not have had the best of times with Rebel Galaxy back in 2015, Rebel Galaxy Outlaw was one of my more anticipated titles of 2019. With the first franchise I ran into issues with graphical pop-in, uninspired ship design, and a bit too much hype by friends and colleagues. It was consistently touted by reviewers and YouTubers as the best Firefly game out there; everywhere I turned I saw Rebel Galaxy being compared to the laudable television franchise and when I jumped into the verse, Rebel Galaxy was disappointment after disappointment. Rebel Galaxy Outlaw? Well, it does something few games have done … it is better than the hype. So good that you all need to go pick it up like, right freaking now. You can do so here.

To start, the sound design. Holy crap. Now, I liked the sound design of Rebel Galaxy, especially how aliens spoke alien languages, as it helped with immersion, then add to it the spectacular soundtrack and on an aural level, it was excellent. Rebel Galaxy Outlaw ups the ante in all respects but one; for some reason they seemed to drop the very Star Wars: Knights of the Old Republic-esque aliens-speaking-alien-languages feel and that sort of bummed me out as it was one of the more immersive elements in both Rebel Galaxy and KOTOR. However, the music, sound effects, and quality of voice acting make up for it in a multitude of ways. From the various weapons (the missiles sound glorious) to the flaming wrecks left in your rear-view camera, every element of audio is wonderful to behold.

Now, I feel it important to point out that I have been a long-standing fan of space simulators like Elite: Dangerous, the X franchise, and more recently, Star Citizen. Why is it important? Because most of the titles that I have massively enjoyed in recent months/years have been utterly huge in scale and scope, and those titles are from studios or teams with a long history in making expansive titles. With Rebel Galaxy Outlaw it is clear that you do not need a long pedigree game development or an extensive list  of titles under your studio’s belt in order to make a game that is giant, full of life, extraordinarily detailed, and possessing some of the best audio design in any game outside of the horror game genre. With scope and scale come bugs and confusing gameplay loops, and a reduction in scope with regard to stories or primary quest content. RGO? Not. At. All. While there are some bugs and confusing elements here and there, the story is great, loops are fun, and scope is maintained from start to finish with little struggle. In fact, I think one of the best terms to describe Rebel Galaxy Outlaw is “tight.”  Everything is tightly developed, controlled, and executed, and it is an absolute breath of fresh air, something the space genre needs.

Where Rebel Galaxy Outlaw’s few flaws come into play are with its strongest point; the audio. As mentioned, the dropping of alien languages is a little sad, but there are also weird audio volume variances that happen with little explanation. While it is nice that music or effects will slightly mute when spoken audio appears, when it rights itself it can be louder than before, or audio will be at a volume that is perfectly fine, then you will explode a ship and it will be ear-splittingly loud, or the strange discrepancy between game volume and the gorgeous hand-drawn, cartoon-like cutscenes, where the game sounds great and the cutscenes are able to be heard as far out as Io in orbit of Jupiter. Headphone-using gamers beware. There are other little issues, such as incredibly “busy” ship interiors, with all their stunning neon lights twinkling, distract the eye from what might be important. The interiors are awesome, mind you, but with the incredibly neon and flashy colors, it can be almost-nauseating at times. 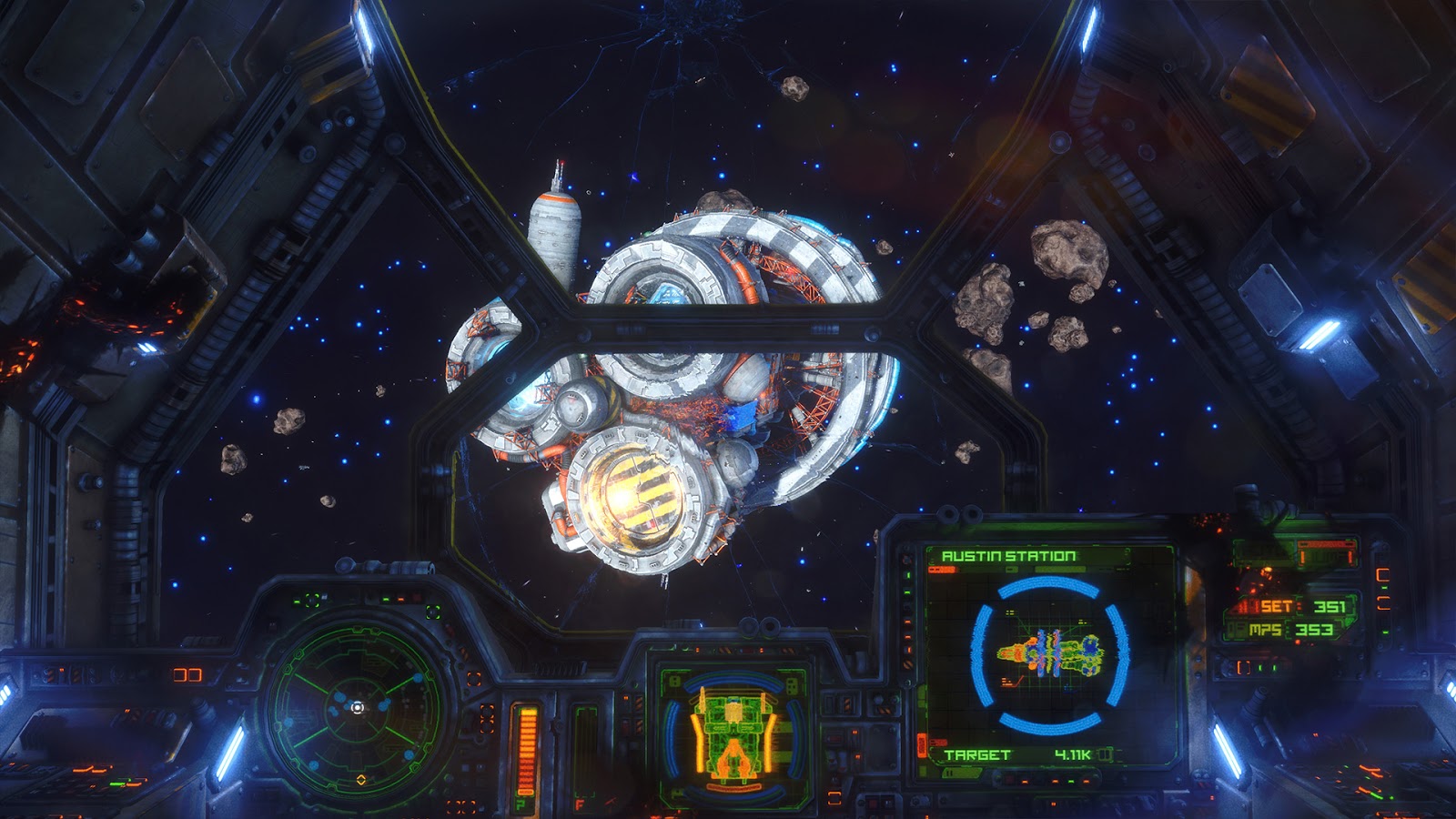 Speaking of colors, this game is full of them. Ship explosions are gorgeous, neon lighting in signs and the aforementioned cockpits, and blend incredibly well with the Titan A.E.-like grunge design. From simple asteroids to the wide array of space station designs to debris just floating in space, everything just looks right. In Rebel Galaxy I was unimpressed with ship design, as they felt uninspiring and slow but in Rebel Galaxy Outlaw each ship feels unique, responsive, and tailormade for purposes found throughout the game. In that respect it feels like a tighter, more interesting title than juggernauts like Elite: Dangerous or X4: Foundations.

One thing I like, too, is that these ships feel more like the single-seat nimble craft that they are, whereas the original Rebel Galaxy was exclusively (if by intention or not) large-scale ships (hence the broadside combat, I believe?). The snappy, more agile craft, better flight model, and wide selection of weapons and armor help drive home that this is no lumbering RPG-like space simulator like its predecessor, but rather a fully fleshed arcade-y space combat game with tons to do. With minigames like pool (seriously, I could spend days playing 8-ball in RGO), the slot machines, or dice, combined with numerous side missions like scanning sectors, trading content, or bounty hunting, all while on a very personal mission of revenge, there is no end of entertainment in Rebel Galaxy Outlaw.

Double Damage Games has nailed it out of the park with the near-perfect evolution of Rebel Galaxy Outlaw. With its stunning graphics, detailed universe, and stellar gameplay, it is an upgrade in every sense of the word from the original Rebel Galaxy, but it has not lost touch with the core of the original title. Strong quests, side missions, customization options, and scope will firmly land RGO as the best space game of 2019. Take dozens of hours, thousands of customization options, and one of the best ship customization tools I have ever seen, and package it with stupendous audio design, a soundtrack to make Cowboy Bebop jealous, and a story that is touching at times, riveting at others, and you have Rebel Galaxy Outlaw. It is a damn shame they felt a need to throw shade at other developers or titles (including their own), as it came off as petty and unreasonably haughty; let the game speak for itself, especially Rebel Galaxy Outlaw, because it is worth it. Just a damn shame I could not get out of my ship for some FPS combat goodness, nor could I build my own station and trade empire…