Take on your opponents in this fast and furious racing game where anything goes!

Paris – Tuesday 30 July 2019 – Today, Microids and Paws, Inc. are announcing the upcoming release of the game Garfield Kart Furious Racing! The game will be available on PlayStation 4, Xbox One, Nintendo Switch and Steam on 7 November in Europe and on 5 November in the United States.

Fans of racing, cats and lasagna: get ready! Garfield, the world-famous cat, is back to take on Jon, Odie and their friends in this racing game where anything goes! Each of the available characters and karts (which can be customised with dozens of accessories) has its own characteristics and a unique driving style: make a strategic choice to match your playing style so that you can cross the finish line in first place! Get off to the best start on the starting line and master tough skids to save time and win the race.

Crazy bonus items will be available too, including the pillow and the magic wand, to give you the edge over your competitors. Are you as lazy as Garfield? Take shortcuts and use the Spring to overtake everyone else!

The Garfield Kart Furious Racing game is perfect for playing with friends or family and features 16 iconic tracks from the world of Garfield, including Palerock Lake and the Pastacosi Factory. Compete in online races with up to 8 players and split-screen races with up to 4 players. Nintendo Switch players can take advantage of local, wireless connections to connect up to 8 consoles!

Three game modes will be available to please even the toughest of drivers: Grand Prix, Single Race and Time Trial. 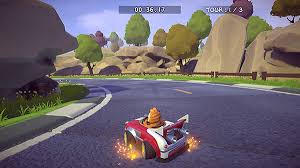 ***
Ready to cross the finish line?
Reunite with the series’ 8 iconic characters (Garfield, Odie, Jon, Nermal, Arlene, Liz, Harry and Squeak) from 7 November 2019 in Europe and 5 November 2019 in the United States on PlayStation 4, Xbox One, Nintendo Switch and Steam!
Find Microids on Facebook, Twitter and Instagram
See all our videos on Youtube

Over the last few years, Microids has built up a solid catalogue of games for PC and next-generation consoles. Its work with well-known studios and authors (Pendulo Studios, Eden Games, Paul Cuisset, Benoit Sokal…) and its adaptations of famous licences (Asterix, Blacksad, Vertigo, Garfield….) have enabled it to reach a wide audience.

GARFIELD was born on the comics pages on June 19, 1978. The creation of cartoonist Jim Davis, GARFIELD is a humorous strip centered on the lives of a quick-witted orange cat who loves lasagne, coffee, and his remote control; Jon Arbuckle, his owner; and Odie, a sweet but dumb dog. GARFIELD was introduced to the world in just 41 newspapers and is now the most widely syndicated comic strip ever, appearing in 2100 newspapers. The strip, distributed by Universal Press, is read by over 200 million people each day and is translated into 42 languages.  The success of the comic strip spawned an entertainment empire including television: Garfield and Friends (1988-1995), The Garfield Show, currently on Cartoon Network in 130 countries, a dozen primetime specials; movies, including Garfield: The Movie and Garfield: A Tail of Two Kitties; hundreds of best-selling books, and thousands of licensed products.

Garfield has long been considered an evergreen property because he has not only endured, but continues to be fresh and funny after 36 years in the limelight.

Cartoonist Jim Davis’ company, Paws, Inc., was founded in 1981 to handle the creative end of the Garfield licensing business. Today, Paws is the sole owner of all copyrights and trademarks for the Garfield property, and controls not only the creative angle of the fat cat’s flourishing empire, but also the licensing, marketing, and brand management of Garfield and the Garfield characters.