You are reading
Cadence of Hyrule – Switch Review

Take your sword~
It’s time for a mighty quest~
So take your sword and heart containers~
So steel your composure the time has come to flee the crypt or
DANCE FOR THE SAKE OF HYRULE.

Cadence of Hyrule was a thoughtful collaboration between Nintendo and Brace Yourself Games where Hyrule’s children of legend must boogie their way through new and old enemies alongside our dirt-digging heroine. Together this game combines action adventure with rhythm puzzle solving mechanics. So strap on your dancing shoes because we will be diving back into the kingdom of Hyrule with our legendary heroes, Link and Princess Zelda, who are confronted with a new villain; its up to them and their new partner, Cadence, to shovel their way through darkness and dig for the truth.

Combining the music styling from Crypt of the Necrodancer with the action/puzzle solving gameplay and dungeon exploring mechanics of the Legend of Zelda series is definitely an interesting choice. As with Necrodancer, you move to the rhythm of the songs playing in the background, where every beat is when you perform your actions such as poking things with the pointy end of your sword, or simply moving around the map, at least until you clear out all the enemies. 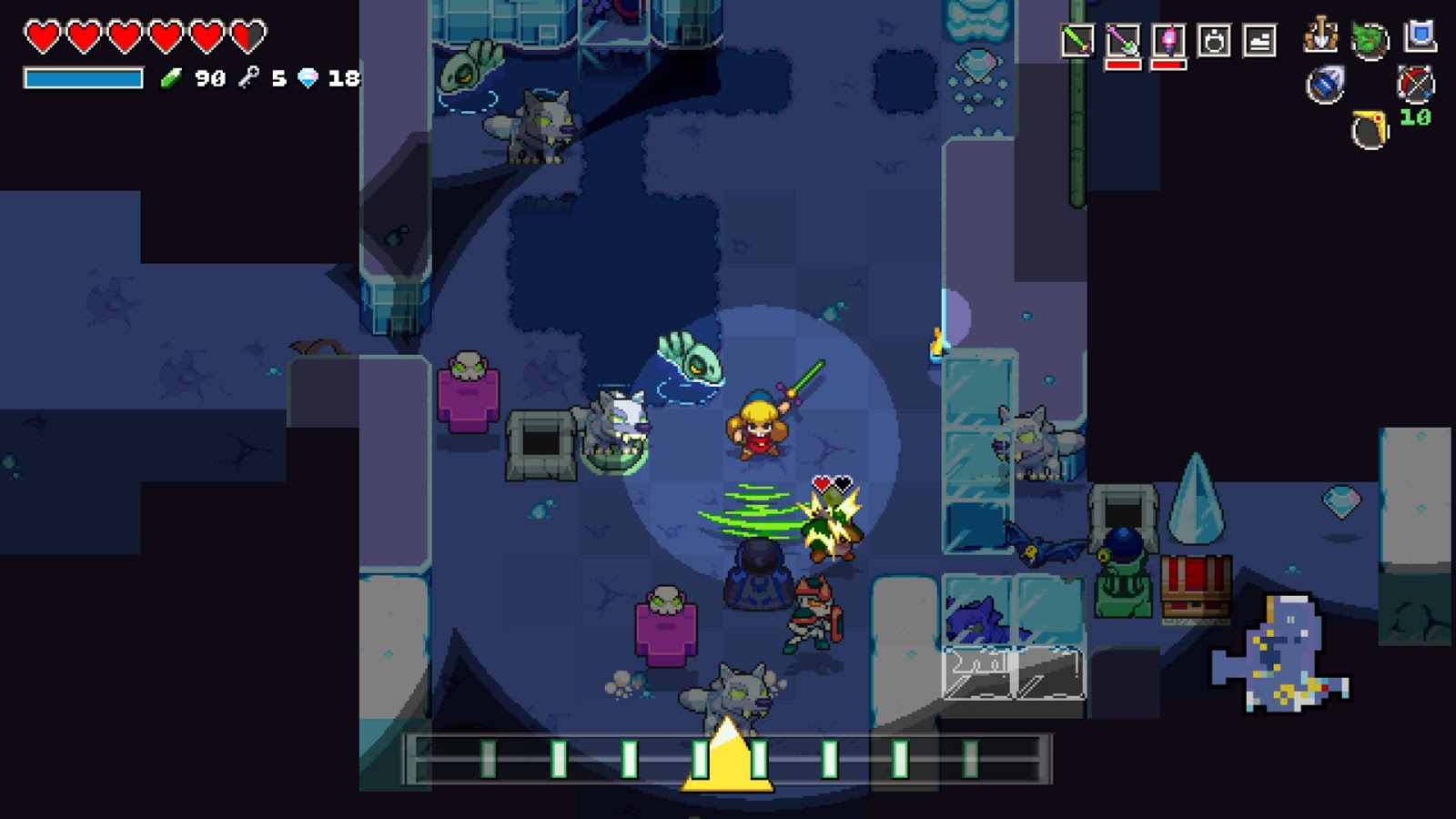 Guess what? The game has an added Co-op mode! Like Necrodancer, where you could solo the whole experience or team up with a friend, Hyrule…mancer? allows you to play with a friend as well. As you start your quest you’ll be alone with Cadence, but don’t worry, simply foxtrot your way over to a Sheika stone, which are scattered through the game, and you’ll be given the option to add a second player. Opening this menu allows you to choose either Link, Zelda or you can choose to stay as Cadence. With your sidekick to back you up, fighting through the dungeons and fields make for a fun adventure.

And a lot of fun you will have, as you dance your way through perilous enemies, poking them in the weak points, collecting new weapons, items, and power-ups, finding heart containers, and fighting pun-tacular bosses. Really though, I still can’t get over “Bass Guitarmos Knights”. You will collect a bunch of different weapons and items on your travels, ranging from the standard sword or a spear, to a deku leaf that blows enemies away, or the cane of Somalia that creates a block in front of you. You also can pick up boots that prevent you from slipping on ice, or power gloves that allow you to throw things. Couple this with a friend who has their own gear loadout and you can create some interesting synergy, even allowing you to bypass some areas if you handle yourselves well. With a bit of practice both you and your pals will be dancing around your foes.

You know what else you can tango to, too? The vast map that you have the freedom to explore. The land of Hyrule is squarely sizable with each area being cubic looking. Jumping from one screen to the next you’ll almost always be faced with enemies, but if the beat keeps on rollin’ then you know the job ain’t done yet. As I mentioned earlier, Sheika stones are placed throughout the map and act as your save points. Each stone will only activate once all the enemies on the map have been eliminated or you touch it, so make sure you bust out those moves. You can also use the stones to travel back to other active save points, making going from point A to B a cinch. 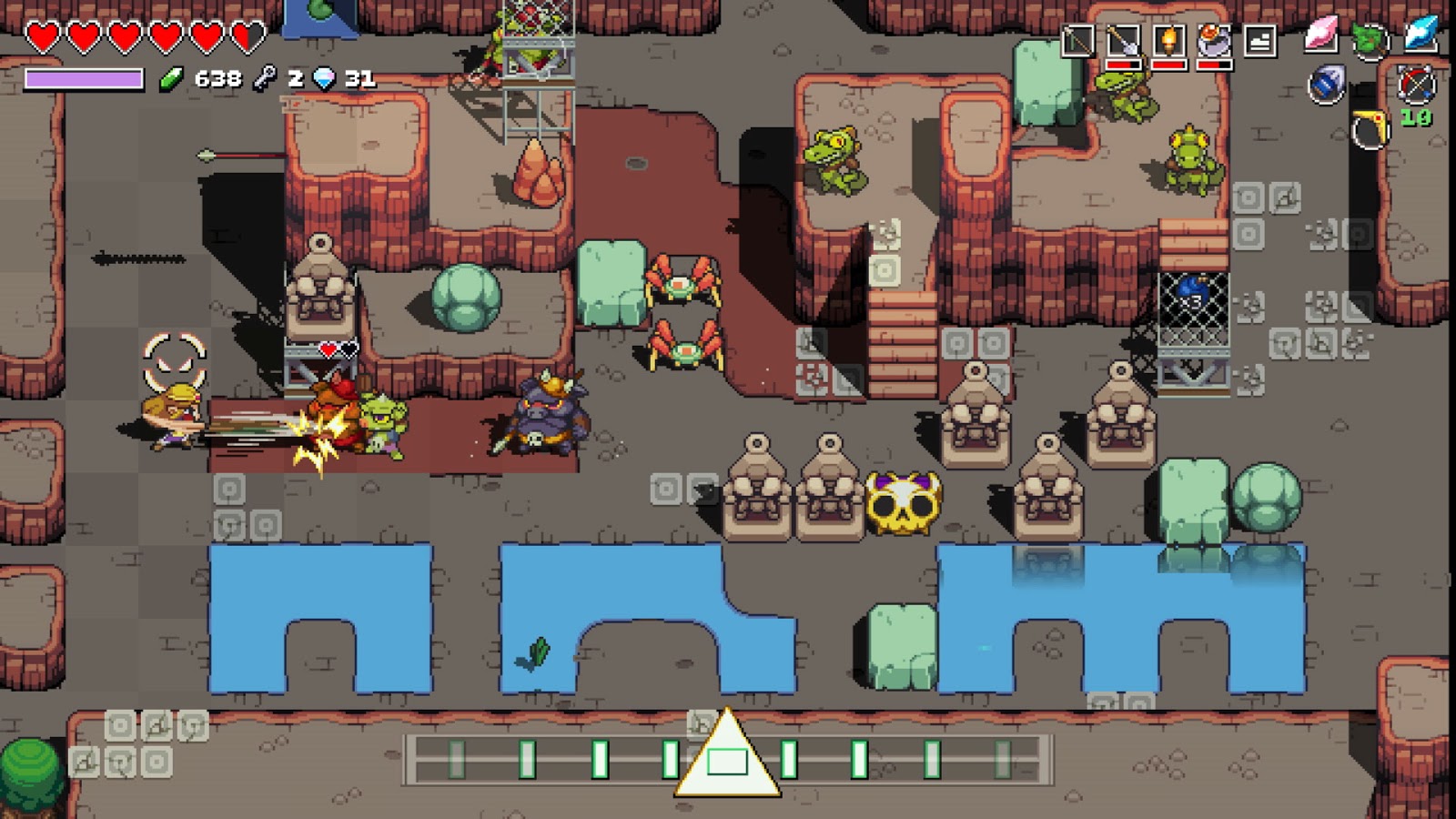 Like in the traditional Zelda titles, you have dungeons to explore. The dungeons in Cadence of Hyrule are an interesting mash-up of the crypt dancing from Necrodancer and more classic Zelda titles. You roam the dungeons to the beat, just like in Necrodancer or in the overworld, but there are multiple floors, as well as locked rooms and small keys to find, as well as a compass and a map. There are also little puzzles, usually involving pushing some blocks around, in order to reach treasure chests or heart containers. At the end of the dungeon, you face off against a pun-iano! Er, pun-themed boss. Like the Bass Guitarmos Knights. They’re big, they’re tough, and they can drop some sick beats.

Speaking of beats, the soundtrack for this title is to die for. If you liked Crypts 8-bit, techno-filed, guitar-shredding tunes then you’ll be getting more of it in Cadence of Hyrule, but with a Zelda twist to it. All your favourite, memorable, pieces in the series are now amped up to the hip sounds of Necrodancer. Jamming your way through numbers like Death Mountain, Gerudo Desert, Hyrule Field and much more. I don’t think there was a single moment where Solaris and myself (JaydaNyx) weren’t chiming to most of the music. Don’t even tell me that you aren’t going to go by the shop and listen to those sweet sweet notes sung by the glorious shop keeper as he chorus out to the Zelda theme song, you be a liar! That stuff is heavy metal! 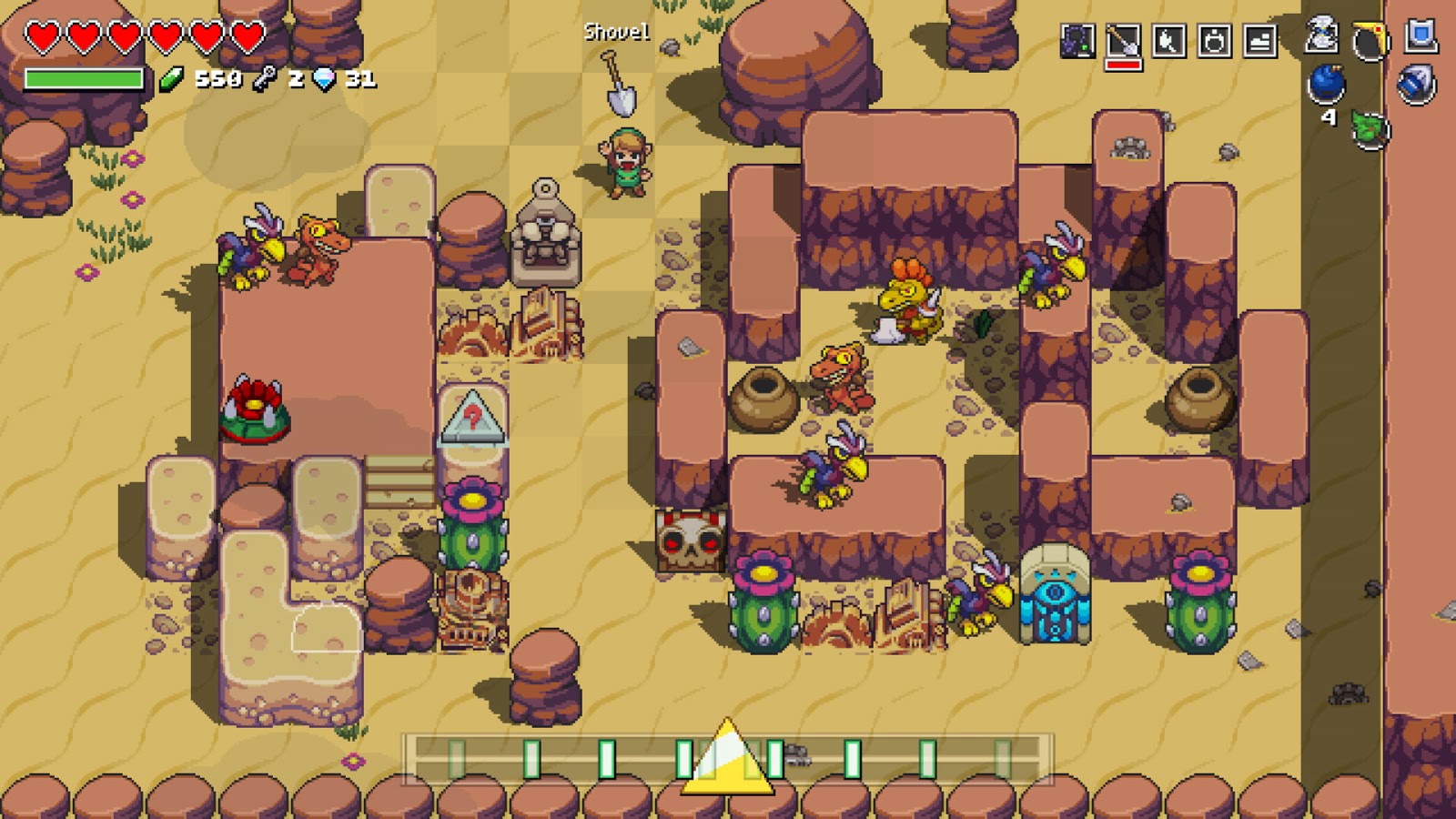 With a more recent stylizing to the graphics that acts like a nice blend between Necrodancer while leaning a little more heavily towards more recent 2-D Zelda titles, Cadence of Hyrule is a wonderful rhythm adventure through some nostalgic locations. With or without a friend, you’re sure to enjoy the Zelda style or the great music that gets dropped on you. Even if you aren’t a super big rhythm game fan, you should at least give it a shot, you might be pleasantly surprised. Co-op mode was an absolute blast, and I’d be up for plowing through baddies with my co-writer Natasha again!

And let’s not forget to give a big thanks to Nintendo for continuing to bring us these uniquely fun crossover games. Cadence of Hyrule was a great experience for a long time fan like myself and I’d be glad to pick it back up and play it again with my best bud. Nothing screams FRIENDSHIP like a good rhythm game that makes you want to have a dance-off.

So grab your dance shoes and pick up your switch~
As you descend into the crypt (dungeon)~
To dance
Your way
Out of a frightful death~
And dance. For. Your. LIFE!