You are reading
Automachef – PC Review

Side Note Be follow Hermes Interactive on their official webpage, Twitter, and LinkedIn. Keep an eye on Team17 for future published titles on their website as well!

Ever wanted to create the ultimate automated kitchen where you don’t have to worry about pesky employees not being efficient enough? Well, now you can live your dreams in Automachef where you create the best, quickest, and tastiest meals. Just make sure to keep that efficiency rating high and don’t anger the food critics! This management puzzle game provides several hours of entertainment as players scratch their heads over the fastest designs possible. Automachef is a great time for all ages and I’m enjoying the heck out of it.

I’m incredibly surprised at how much time I spent playing Automachef. It is a management game that has an intuitive design. Each level has objectives that players need to fulfill in order to succeed. If an objective is not completed then, when looking at the timeline, the circle next to that particular requirement would not be filled. Level requirements will be things like energy usage, orders fulfilled, food critic orders satisfied, total ingredients used, or time limits. In the campaign, completing these objectives opens up the next level, however, there are a couple of other modes that can be played.

Notably, Automachef possesses a Career mode where players begin with a budget to take on contracts. This mode presumes that players have already completed the game or understand what machines are needed to complete various orders. It does not hold your hand by telling you what is required for each contract. The most players receive is the menu list, a budget, a power usage, or total ingredients that can be used. Objectives in each contract changes based on the difficulty level set. While players can complete a contract on easy, they will receive less money, less of a bonus payment, and a lower efficiency target to meet. The objectives will also scale accordingly, allowing players to produce fewer dishes during rush hour times and lower energy use. Overall, this mode is great at providing a challenge once players finish the campaign mode. 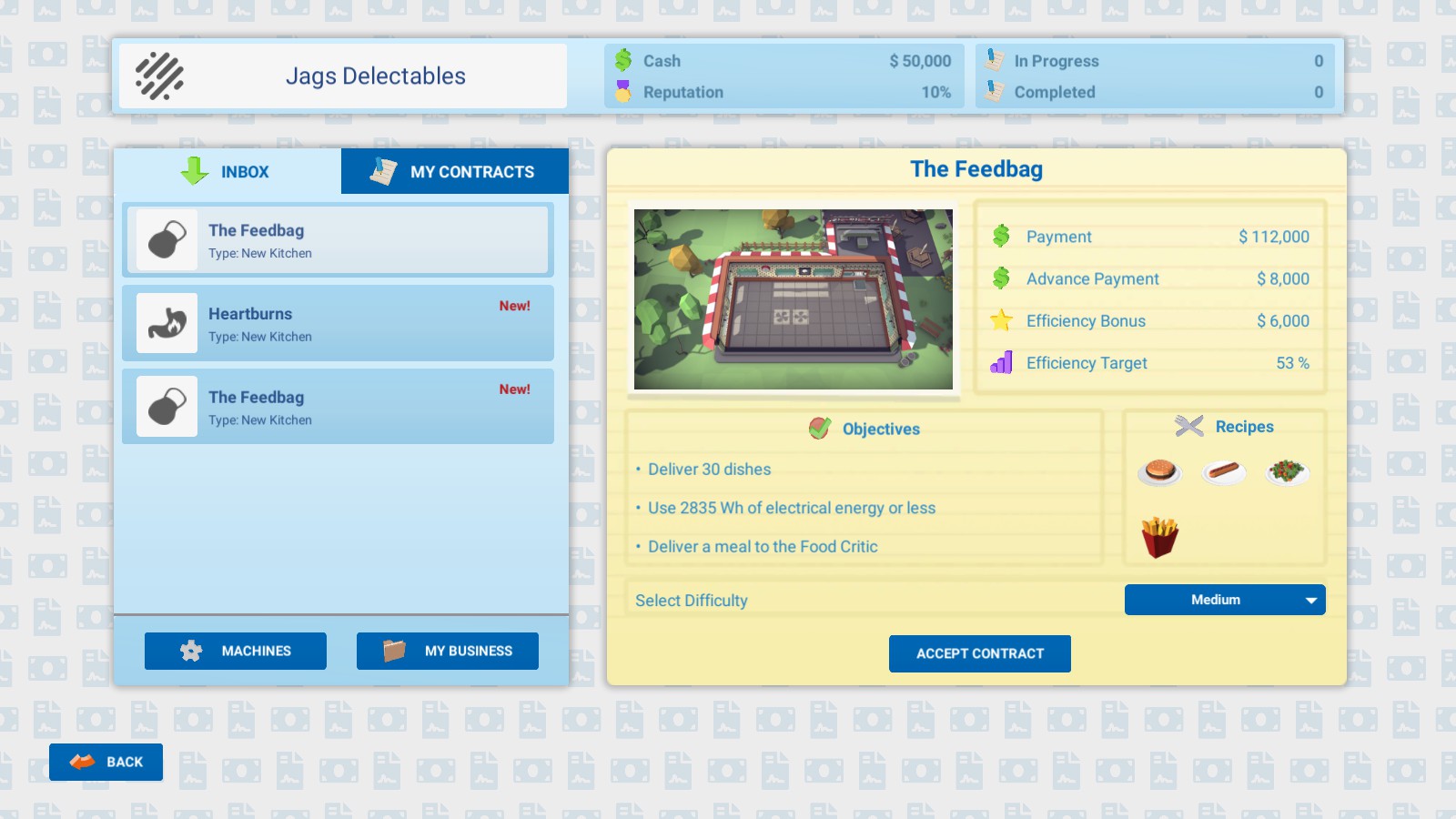 There are three other options that are self-explanatory. A scenario mode allows players to make their own challenges with their own objective list that can be published on the Steam workshop. At the moment, there aren’t many scenarios available, but there are a few that players can try.

Another option is the test site where players can see how their builds function, apart from testing them out during levels. Players are able to stop the level from completing when something isn’t working and because of that, I haven’t really needed to use this mode. I imagine that it is useful for players who are looking to build complex kitchen designs for scenarios they will publish at a later point.

Finally, there are mods for Automachef. Currently, there are four available (at the time of writing this review), and each presents different food choices like onion rings or steak. Instead of just cooking a steak to one base rareness level, players have to cook it to the specifications of the order (like medium or well done). With the mods, players will be able to add more management fun to an already entertaining game and I love it.

The UI in Automachef is quite intuitive. On the left is a menu screen with two tabs, one labeled Parts and the other is Blueprints. Under the parts tab, different machines available to you are listed. Once you click on a machine, a drop-down appears that displays the power usage, cost, and description. Under the blueprints tab, players can create machine setups that will be frequently used in their kitchens. This comes in handy when playing the burger frenzy optional level where the objective is to crank out 50 plain burgers in under 2 minutes. Your setup has to be fast and efficient to succeed at this level. Trust me. And when you find the right design, making a blueprint goes a long way.

Above the machine list are four buttons: move, duplicate, recipe, and turn camera. The move button allows players to move whole sections of their automated machines, instead of having to individually click on them. Duplicate is self-explanatory. The recipe button shows players what ingredients are needed to complete an order, though it does not tell you what machines are need – something that needs to be figured out by the players. Lastly, there is the turn camera option which twists the camera 45 degrees on the right then left and back to normal again. To me, the camera option is the most useless feature, but I digress…

After setting up the kitchen and when you begin taking orders, the screen changes to have new information displayed on the left. The Level Progress will appear, displaying objectives to succeed such as, the number of dishes delivered, energy used, total ingredients used, food critic orders satisfied, or time left to complete objectives. Underneath those will be power usage and reputation percentage. Reputation is most important in Contracts mode, where players will bolster the rating by successfully completing contracts. In the campaign, the reputation remains at 100%, and thus far, I haven’t determined how important this is in later levels.

When players are fulfilling their objectives, there is a drop-down menu on the right side of the screen which displays useful information like Power Usage, On/Off, Bacteria, Fire Hazard, and Infestation Hazard. All of these display options help determine the success rate of kitchen designs for the player, which is incredibly useful for later levels where some of these kitchen issues are introduced.

Overall, I love how simple and accessible the UI is. It has a lightweight feel to it and I find that because of Automachef’s graphics, it is easy to play on older computers.

On the good side of automating food:

On the bad side of food automation: 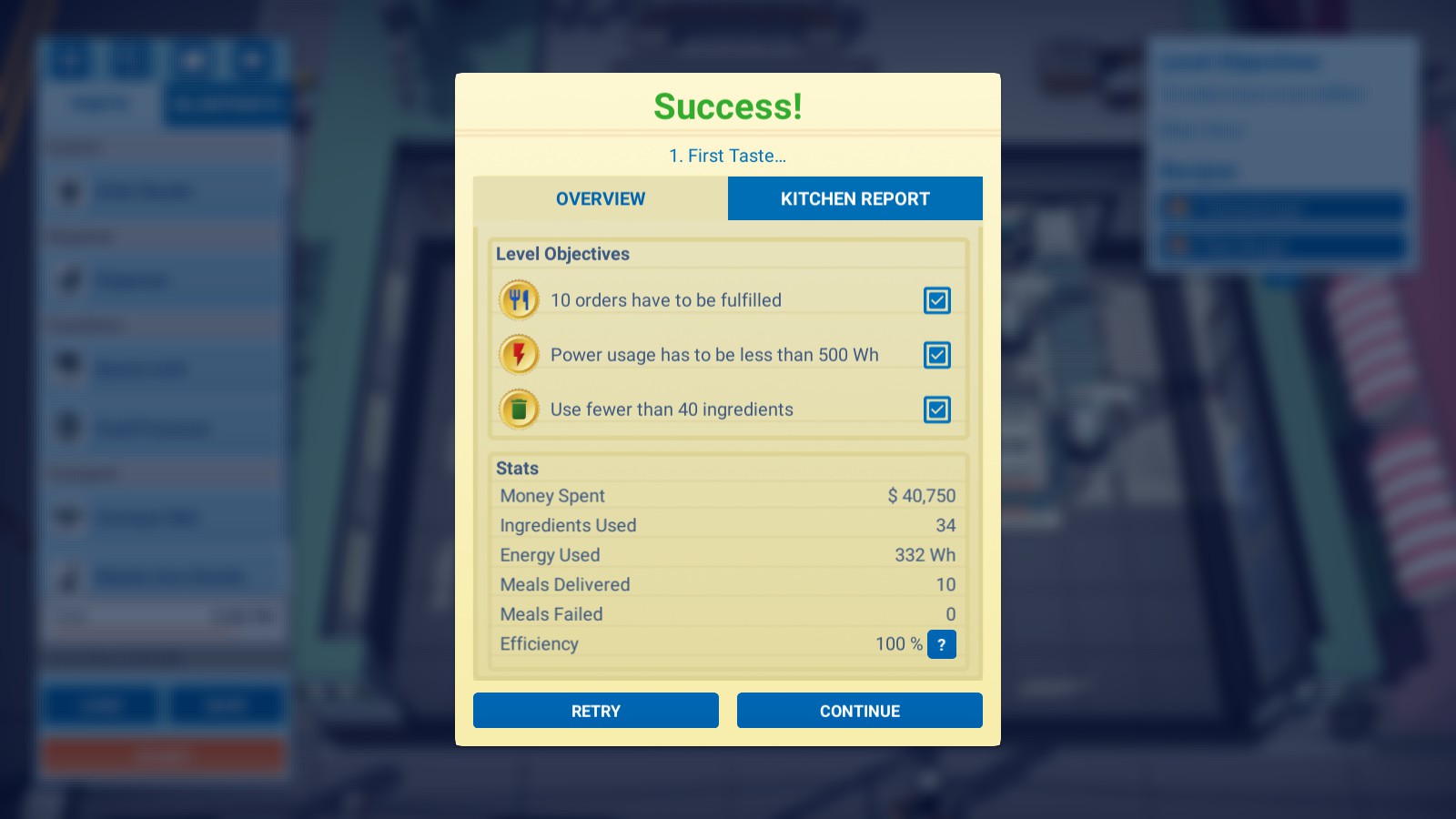 I’ve been having a great time playing Automachef because it is a challenging management game. Plus it helps that the robot you work with has a lot of ambition and high expectations. There are different modes that players can sink their teeth into and there are all kinds of food options available to satisfy your hungry clients. Even though there are some minor grievances about Automachef, they are not enough to detract me from playing this title a ton. As such, Automachef has made it past the chopping block and onto our plates with a solid 8 out of 10. So be sure to pick this title up for every gamer you know that love management puzzle simulators on Steam.