You are reading
MistOver – Switch Review

After a deadly mist covers a part of the world unleashing death and hell itself upon it, it just as quickly disappeared. Fearing what may come out it, expeditions started to make their way in for fortune and fame against the creatures that lay waiting for them within.

MistOver, like the name implies, is a hardcore permadeath roguelike of what a fantasy world could be like once the mist that devestated it fell back to where it came. Finding a sort of weird, yet perfect marriage, between Etrian Odyssey, Mystery Dungeon and Darkest Dungeon, you’ll be putting a team together and sending them out into unknown territories to complete quests and hold off what is basically the end of the world.

If I hadn’t seen who had developed this I honestly would have said that it was Atlus and that this belongs in the Etrian series. Krafton have not only created an excellent and hardcore form of gameplay, but the art style is simply uncanny in all of the right ways. MistOver definitely stands out enough to catch your eye and make you wonder what’s it all about with its various characters acting as classes and the hordes of different monsters. 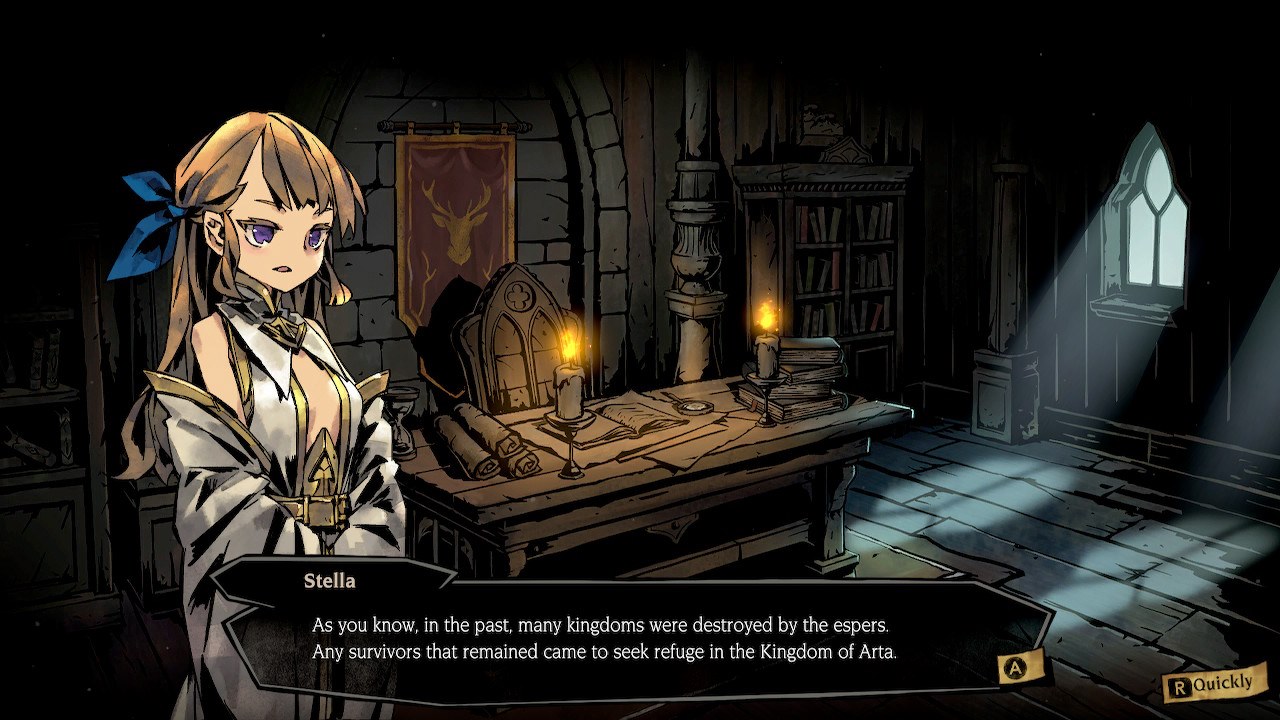 After a very brief and quick tutorial, you’ll be starting off with a view of the town that will be acting as your base of operations. Leaving town with a party of up to five, you’ll be entering fields where every step your party takes will take away from both your light source and your hunger in the typical Mystery Dungeon fashion. Starting with a high value of four units a piece, MistOver holds no punches as it doesn’t take long to leave your party both hungry and in the dark with the monsters already hiding just out of sight.

None of the styles that compose MistOver are ever to be taken lightly and even less in this case. Starting off at level one, each member of your party owns no equipment, has no way to improve their skills, and over all of this, has no way to upgrade their capabilities until at least a few delves into the mist where they’ve gained enough experience in order to level up. Equipment can only be found in the reaches of the mist or as a quest reward, experience can only be gained by fighting packs of monsters that have not been fought before, and skill points are given at the rate of one per level and then you have to pay for the upgrade. Needing to buy food every time you come back as what you had become spoiled, there’s a lot of inventory management along with the stress of if you’ll even make it back.

But it works. Even if it feels rather unfair in the opening few delves and you getting a hang of the system, it works. The party that you form up can have up to five characters. Each character works as their own class and its finding what works for you that will help you ever push forward. Sisters are clerics, Omnyoji are Japanese spirit priest, Ronin are badass warriors without defensive abilities, Paladins are tanks, Witches are glass cannons, Reapers are a form of long range warriors specializing in debuffs and Werewolves are just freaking cool and look like berserkers. 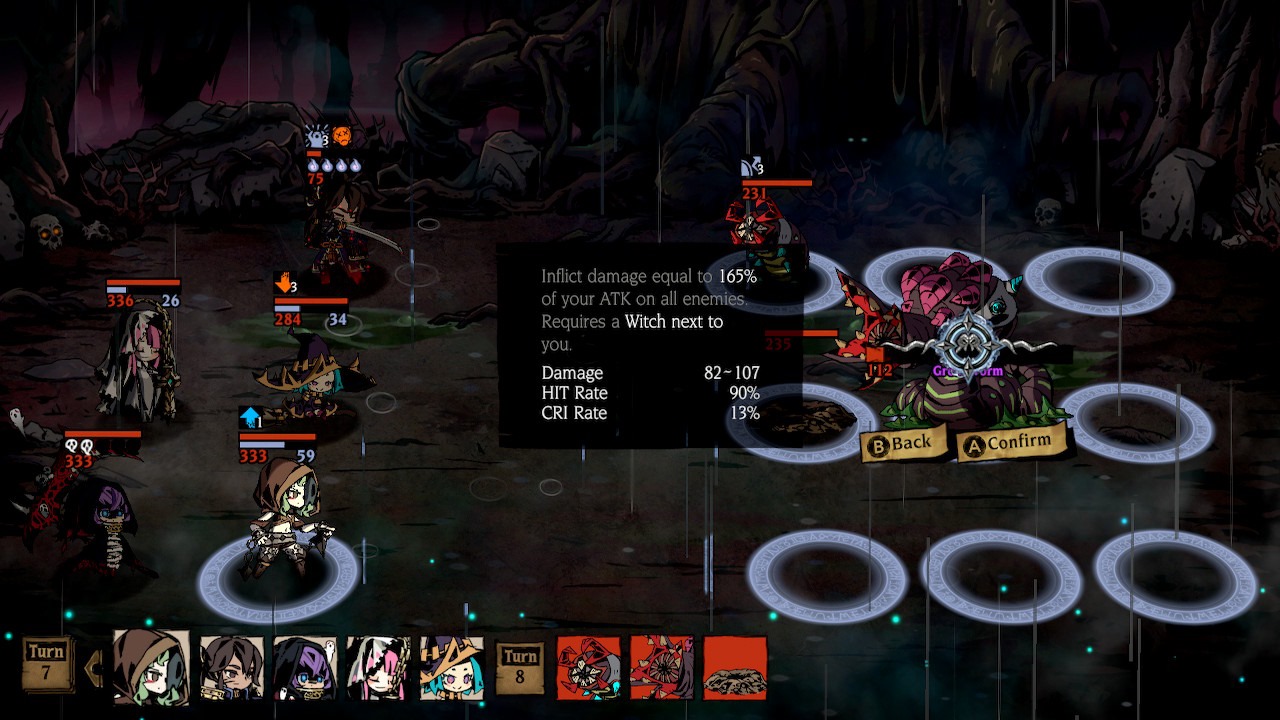 More than just their class alone, as they level up characters can learn special abilities that require another character to be in front, behind or to the side in order to be performed. My favorite Shadowblade for example beside a Witch can launch giant ninja stars onto every single enemy. The Sister in front of the Shadowblade can hit everyone with a less power but cause bleeding damage over time. Each character is placed on a 3×3 grid and their placement matters for every single skill. Some like the Reaper and Ronin if in the middle row can use almost everything they have, while if you have your Shadowblade in the back, she’s really there for the ninja star ability because of how useful it is.

On top of worrying about your inventory space, how much food you have left, how much light and if you have the space for more equipment or not, MistOver is a severe game of numbers. Skills will all tell you how much of your attack power they deal and if it’s for one enemy, a row, column, or everyone. AND FINALLY as you level up these abilities, they don’t cost more but actually less as the character has gotten better at it. Who would have actually thought. So leveling up abilities is finally in your benefit as you can cast them more instead of less.

Now where MistOver hurts the most, is the perma death. Once a character has reached zero hit points, as long as you notice, you have a chance to save them. It’s not pretty and it hurts to lose them, but thankfully you don’t need anything special for once, you just need to heal them up. My first Paladin died because I had nothing on hand and didn’t know that just magic would do it. MUCH later when I finally hit game over, my Witch died because I didn’t know she was bleeding out once the battle was over. But gave over you say? Can’t you just recruit more characters? Yes, but only for so long. 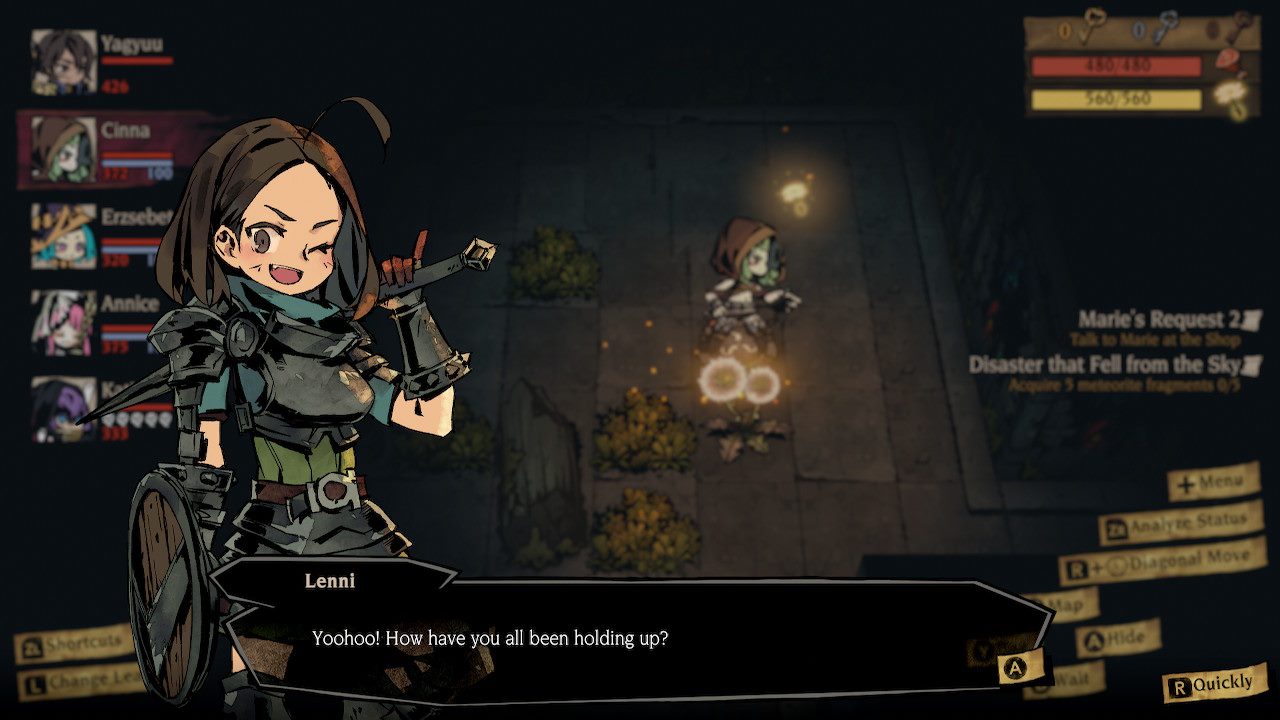 MistOver’s permadeath is two-fold. One is for your characters, the second is for you save file. Let’s just say that the second hurts a lot more than the first. So, why? While the mist may have pulled back, it pulled back just enough to save up power in a sense in order to finish what it started. In order to prevent this, everytime that you launch your party out into the mist, you’re going to have to do one of several things while exploring, grinding for experience and taking care of quests.

You’re going to have to open chests which lead to loot, light up flowers which grand you back your own light making you only really have to worry about your fullness, and finally, kick the crap out of monsters that you have to do anyways in order to level up. It sounds easy, but in the beginning once you’re learning what to do, “it ain’t easy kid” and you’ll often see the clock move towards your doom. Once that clock strikes what is basically midnight, there’s a play by play visual cutscene in which you’ll see the world being torn apart until everything fades to black and the credits roll.

Oh! And there’s no NG+ or carry over from this. Just the option to start anew knowing a little better what you’ve got to do and the results if you don’t!

That said, MistOver was fantastic. Each character can affect the environment differently such as the Shadowblade can hide for fifteen turns or the Paladin can break obstacles freely instead of your party losing hit points. The controls themselves are smooth, the amount of customization for classes and party setup are vast especially when put onto a 3×3 grid and finally the combat itself was fun. It’s an amazing marriage between Etrian Odyssey’s class like system, the Mystery Dungeon series’ take on dungeon crawling and Darkest Dungeon which forms the more western influence. 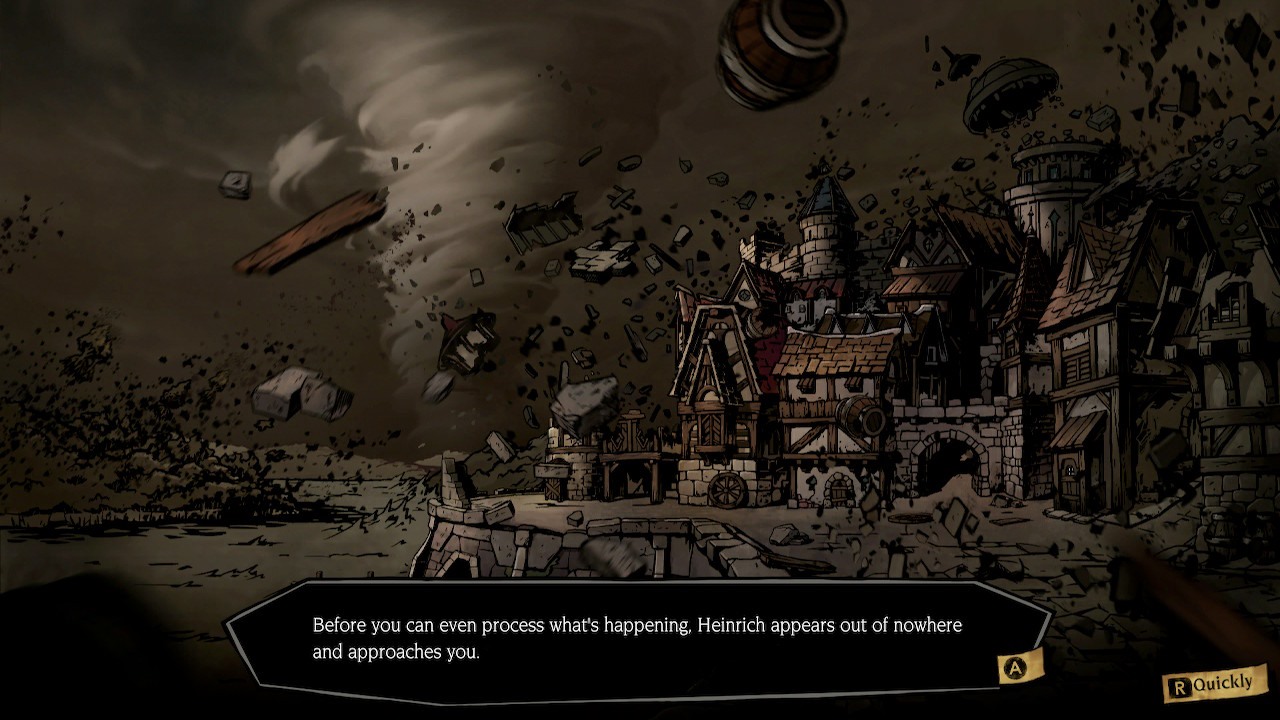 This last element is what makes everything tricky. It isn’t just that you lose the light while exploring, but it’s that you pick up jinxes as the adventure moves forward. Thankfully unlike Darkest Dungeon where you have to worry about physical injuries and mental ailments and having to lose party members to be healed, MistOver instead heals everyone the moment you get back. What it does in order to make things harder however is that as you level up you pick up bad traits such as your attack power decreasing when you get hit, automatically bleeding, or losing defense because of where you’re exploring. Thankfully even if you pick up these bad traits you can always swap them for another. You can’t get rid of them, but at least you can work at mitigating the damage.

So as long as don’t game over because the clock went and struck twelve, MistOver will keep you busy for a lot of hours. Hell, even if you wipe out and decide to go at it all over again, MistOver is worth it. MistOver is honestly a dungeon crawler that fans should look into even if they have a fear with permadeath for characters. Even if they die off, you keep the gear, cursed, but you keep it and slap it onto the next replacement that you’ve hired as a just in case things went south. With plenty of quests, boss fights and environments to explore, the mist awaits you!