You are reading
Grobo – Mobile Review

Grobo is a cute puzzle platformer that immediately pulls players in with a story about a robot that has the ability to shift gravity. It’s not a complicated game to understand, especially with the introduction/tutorial, and it has consumed a ton of my time. For a mobile game, of which, I personally don’t play many, Grobo has captured my heart and attention.

This is the first mobile title I’ve done as a review, which meant that I did a bunch of checking of phone specs before I even received the code. Once I was certain that the game would run on my phone and after obtaining the game, I found myself taken in by Grobo. As players progress in the game, there is a story being told right before each level. Certain levels also contain ghosts which will give players more of the backstory of Megatropolis. We, the players, come to understand that Grobo is alone in this world. He wakes up in an area that is quiet and void of other robots (or ‘life’), so he embarks on a quest to find answers. Each level is a puzzle that players must complete in order to open up more story bits. 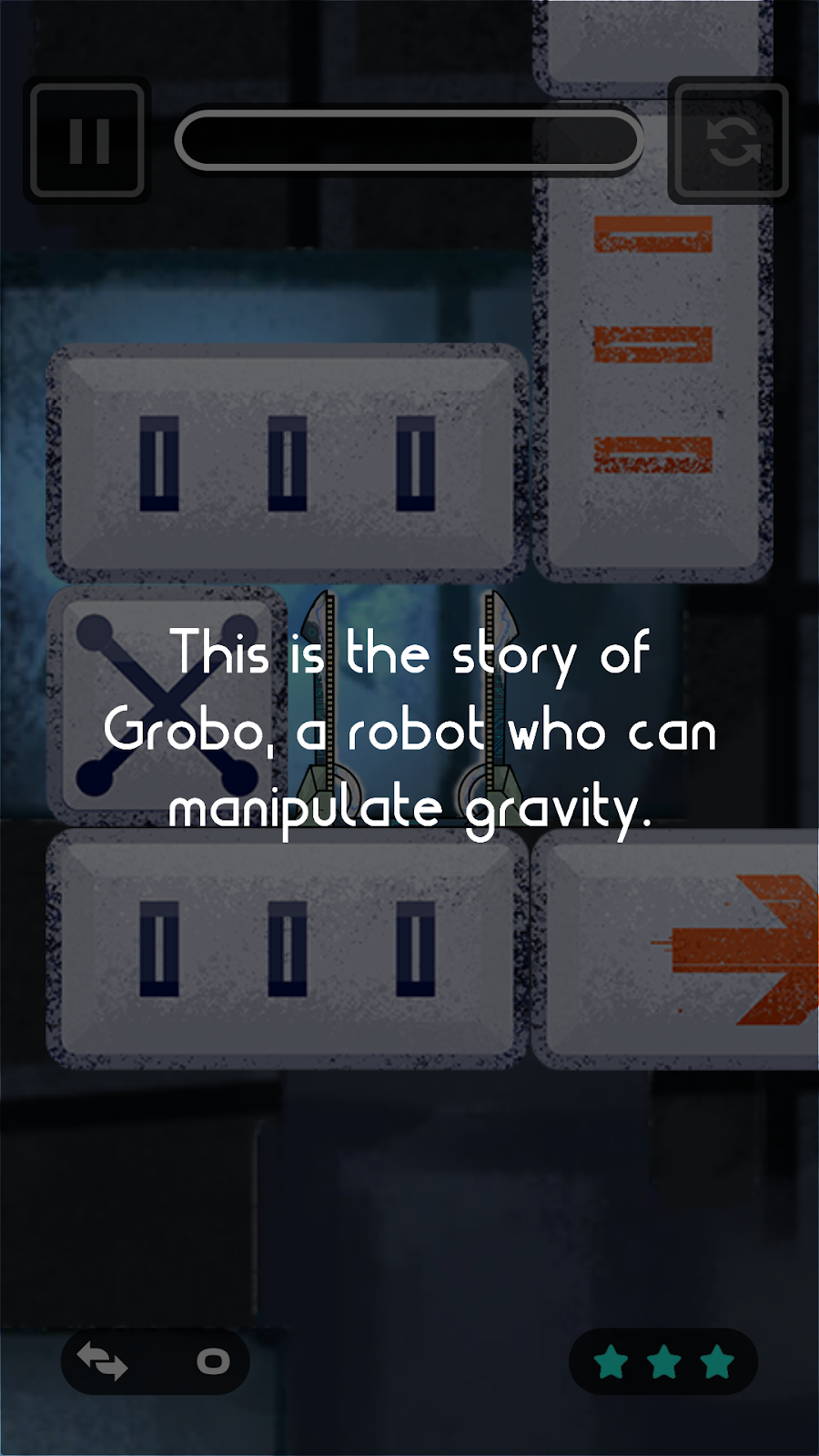 As with any puzzle game, there is a start point and an end point where players must get to, but there are obstacles in the way. Each. level increases in difficulty as the game adds more blocks that stop players from easily making it to the end. It isn’t too long before they run into mines that are strategically placed in the middle of the level to force players into solving the puzzles differently. Levels also include certain blocks that will gravity shift with Grobo and players can gravity shift the direction where these movable blocks can act as ground that he can stand on. Beware though, the blocks serve as useful tools for the player but if Grobo is shift gravity the wrong way, he can be squished by the blocks.

Movement on mobile is easy, although it was frustrating on my phone (which I’ll touch on later), players can touch and drag their finger across the screen for Grobo to move in a direction. They can also tap their finger on the screen so that Grobo moves a little bit, like to get close to an edge where he can land on another platform. To gravity shift, players flick their finger in the direction they want to go. As an example, if there is a block above Grobo that he needs to land on, the player would flick up. Not only would he be on that northern block, but he would also be upside down to the player.

Grobo has a couple of negative points about it that aren’t actual problems but perhaps it is more accurate to call them preferences. My first issue is: depending on the sensitivity of the smart phone, the game will sometimes read an action that isn’t intended. This isn’t the fault of the game, it’s more of a phone issue. For example, my old phone, which I played most of the game on, was frustrating to move Grobo or get the screen to register a gravity shift – often causing me to die. My newer phone responds to the movement of Grobo much better, but has a higher chance of registering a movement that wasn’t intended – also leading to my untimely demise. The reason I mention this is that this game could benefit from a touch sensitivity bar much like PC games would have a pointer speed in game (that is separate from the native mouse speed OR the individually set DPI). If not that, my other suggestion might be to have a way that players can move Grobo with directional arrows. By adding a feature like what I just explained, it would help the game be less frustrating for certain situations and allow players to enjoy the game more. 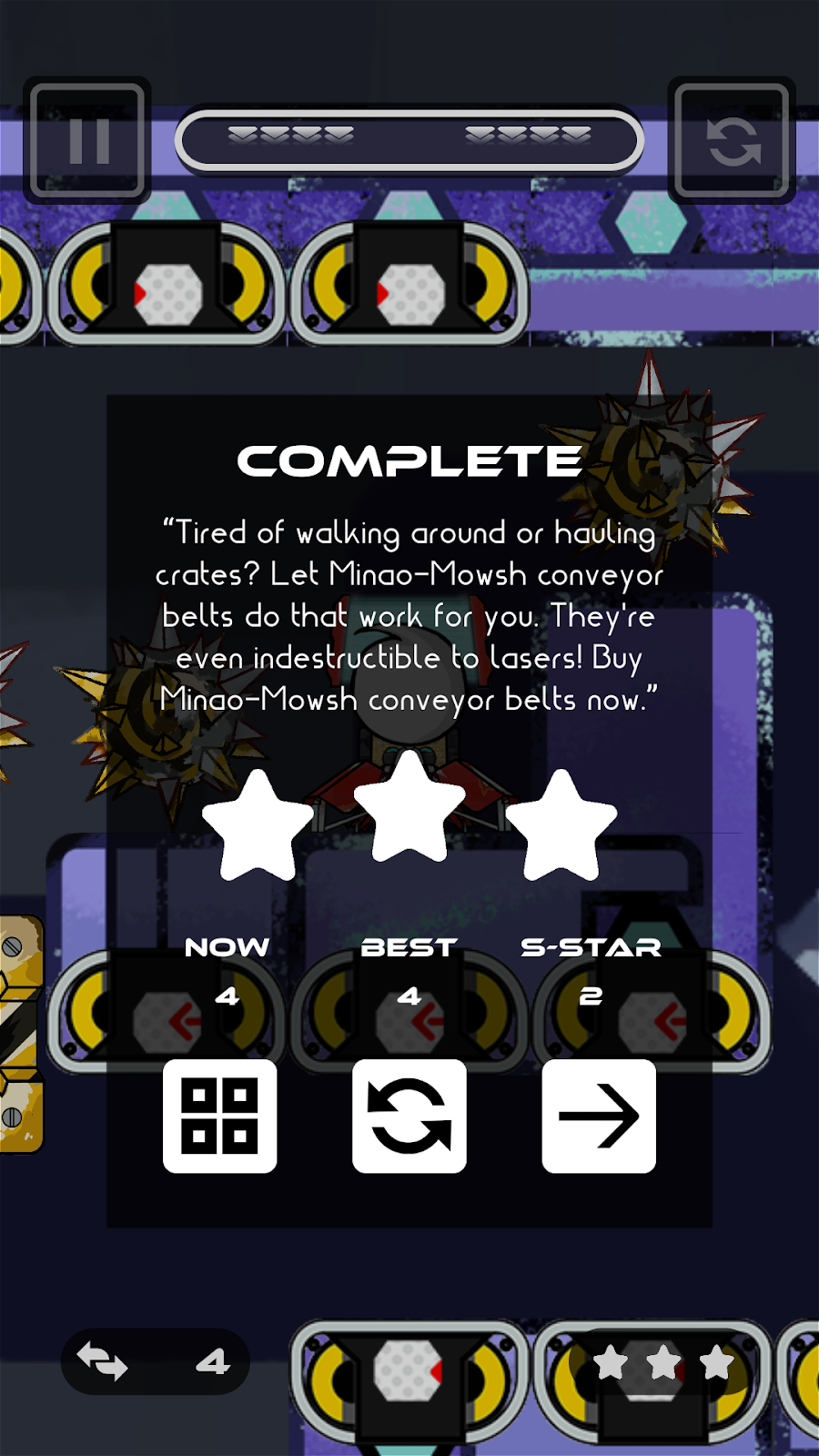 The second minor issue I have with the game is not a requirement but would certainly be helpful, which is that the game only tells players how many moves they need in order to 3 star a level after the fact. But further than that, the real issue here is that many of the levels feel like they only have one solution that players can make. In this case, the reason I feel like this is a con to the game is because many of the levels almost feel like they are holding your hand – leaving little room for creative solving. Grobo suffers from having one clear solution to each level and once a player sees that solution, the game becomes easy.  For a puzzle game, I consider that to be a con – especially since I haven’t yet hit a level that I couldn’t figure out with a fair amount of ease.

With those things said, neither ‘detriment’ to the game deters my enjoyment of it. I found Grobo to be fairly easy, cute, and relaxing to play – so long as my phone would let me move! But the real charm of Grobo comes from the story, which is the driving force of the game, in my opinion. It is the idea that Grobo is alone, and players are taking him through these levels in order to find out what happened. Ultimately, that is the reason I quite like this mobile title. Grobo is a polished game. Despite my individual issues with movement because of the touch screen sensitivity levels, the games graphics are quite detailed. It isn’t a pixelated game in that appearances can sometimes formulate a persons opinion of a game, but rather it looks fantastic even though players are inside a factory. Grobo is detailed, like in the case of the boxes and the mines. The aesthetic of being inside a factory of a Megatropolis comes across clearly between the music, graphic choices, and background splashes. Moreover, the detailing of the ground makes players feel like they are in different places – as in, the ground is not static. It paints a clear picture for players to immerse themselves in – a fact I appreciate, which is to say that I like stories that are told not just with the obvious indicators but with everything else that creates the atmosphere.

I quite like the music in Grobo, which functions as a relaxing backdrop to the puzzle solving nature of the game. It is smooth and non-intrusive allowing players to focus on the puzzle solutions, and it adds to the atmosphere of the game. The music and sound design in Grobo was done by a company called Phoz who are based in New York City. Its team consists of two people, Alba S. Torremocha and Noah Kellman, who have worked on two other games besides Grobo. More information about Phoz can be found on their Website, YouTube, Instagram, and Facebook pages.

Overall, I feel that Grobo is a charming mobile title. While the puzzles don't seem overly complicated, I had a good time playing the game and learning about Megatropolis. It is a neat title that fans of the genre would enjoy, even though the game is fairly short. As such, I give Grobo a 9 out of 10.