Green Hell is a tough-as-nails survival title that brilliantly uses a story mode to easy you through the harrowing survival experience and set in what is easily the most gorgeous survival game available to date. Set in a dense Amazonian rainforest, Green Hell’s staple survival elements will find you peeling leeches off your limbs, managing your sanity via intelligent elements such as hydration or proteins, crafting makeshift weapons, and building structures to protect you from hazardous elements.

Though not ground-breaking by any means, Green Hell does manage to tie in be an excellent introduction into survival titles, with its easy approachability and smooth gameplay elements, however veteran survival game players will find the simplicity of Green Hell something of a drawback. Is Green Hell worth the modest price asked? Without a doubt. Will you spend the next three to four hundred hours exploring the lush rainforests of Green Hell? Likely not.

Simply put, Green Hell is gorgeous with its thick underbrush, towering trees, dense rain, and an atmosphere that simply oozes … humidity. and bugs. While I am an occasional fan of the survival genre, often finding most tedious and set about 4-5 years behind with regard to graphical fidelity, with Green Hell I was instantly pulled in … by the mud. Seriously, it looks great (and I hate to get dirty), but what I found as the real icing on the cake was the combination of the stunning graphics and quality audio design. 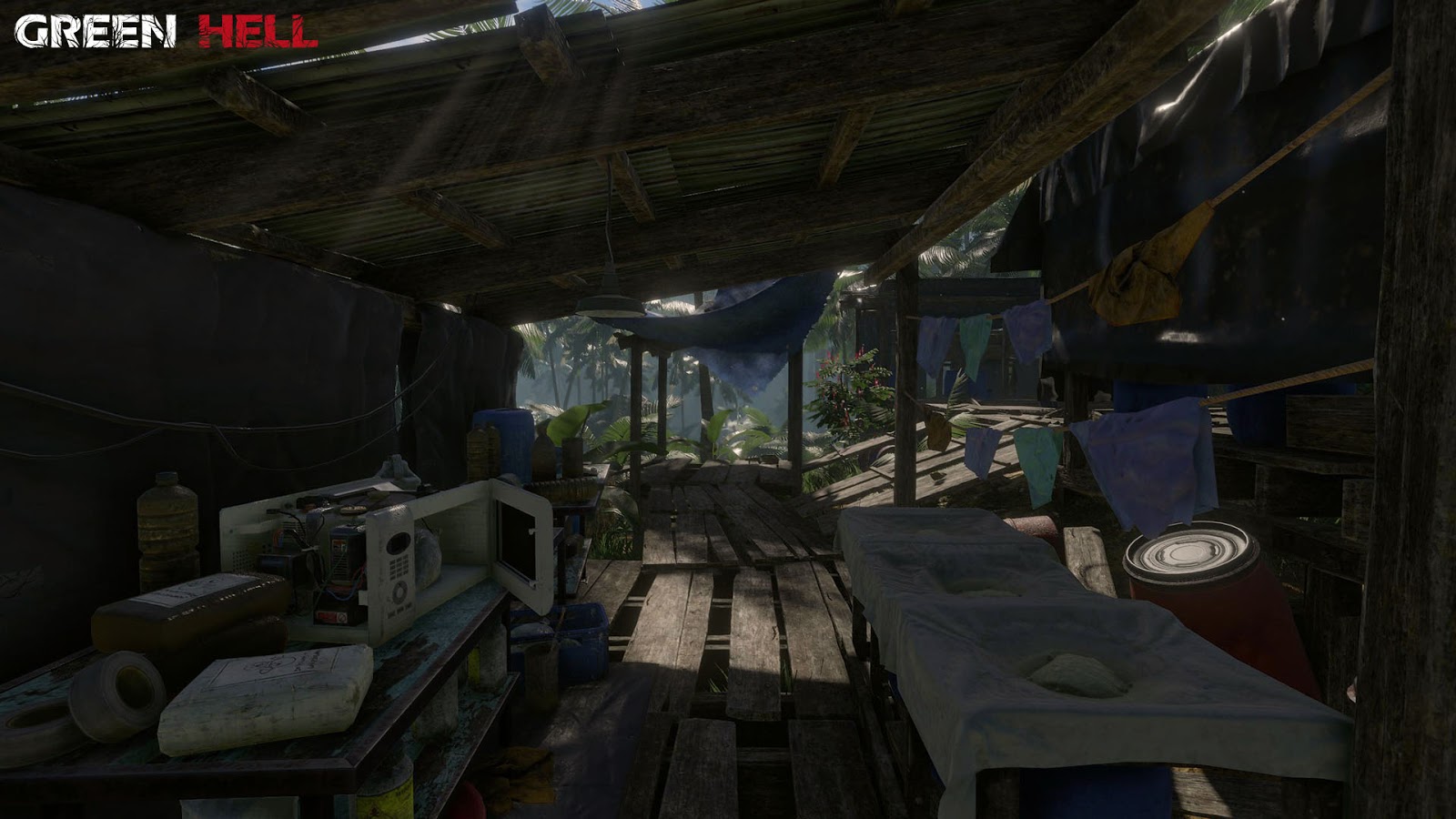 Emerging from your humbly built abode after an intense downpour, to see the sun poking through the clouds and canopy, only to be greeted by the sound of distant running water, various birds and insects, is a wonderful experience. Just be ready to see sub-30 FPS on anything other than modern hardware; this game is a bit of a hog and though it runs excellently on a Ryzen 7 2700x with 32GB RAM and an RTX 2080 8GB (CPU, GPU, and RAM are all overclocked), but with less powerful systems, you will likely see performance issues, especially just after a rainstorm.

Then you die. Because you forgot to pull off leeches (which you will be doing dozens of times an hour). Or you did not grab a protein bar or cooked meat or a drink of water for what seems like the thousandth time an hour. Or you got bit by a snake (seriously happens constantly; keep your tobacco handy in game because that is what is used to heal snake bites, and you will get a TON of them). The balance to manage sanity and enjoyment is weighted poorly in the more challenging difficulty settings but works well in the more beginner or basic difficulty levels.

In fact, balance is not the only place Green Hell shows some of its more amateur underpinnings. Take crafting for example, some items, such as buildings or basic survival needs, are managed through a crafting notebook and that is an enjoyable and immersive experience. However, if you want to craft smaller items, such as weapons or building elements specific to the larger items in the notebook, then you do so through a more traditional crafting menu … This strange dichotomy is rampant throughout Green Hell and though confusing, is not exactly detracting from the overall experience. 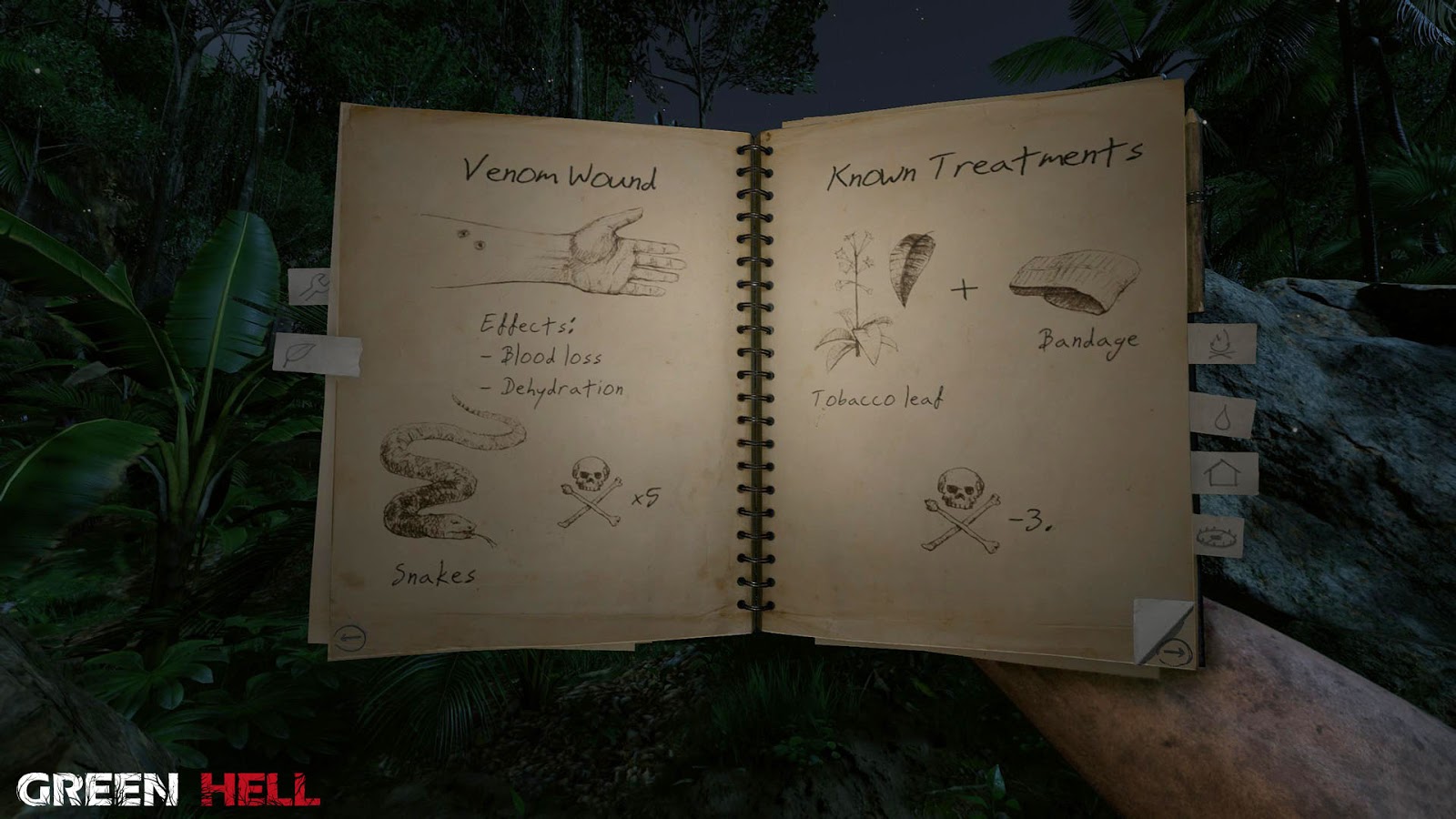 That very strange branching path for similar elements shows its real colors in the overall experience of Green Hell. The story is interesting, full of exciting moments, and incredibly well written … not exactly something one would expect from a survival game. In most games you simply … wake up with some sort of vague recollection of being abducted and thrown out of a plane, or maybe your plane has crashed in some hostile environment, or you are a prisoner or whatever. Instead, with Green Hell, you are researcher Jake Higgins and along with his wife Mia, head into the Amazon rainforest in an attempt to deepen relations with one of the Lost Tribes.

From there the game progresses through a few simple days (used as a basics tutorial) then the fecal matter really hits the rotary blades. Unfortunately I cannot go into any real detail about the story since, well … spoilers. Though exceedingly fun, to go into it at all would really spoil things; I can say this though … imagine a more realistic take on Indiana Jones, but full of the fulfilling if mundane elements and not so full on crazed volcano-dwelling heart-stealers or Arks that can, well … you know. Where the duality lies is in the fact that the game’s story mode is stellar yet the standalone sandbox mode is actually quite unfulfilling. This lies largely in the fact that though engrossing for a time, Green Hell is not as deep as other titles (like The Forest or, believe it or not … Rust).

Though full of frustrating elements, like snakes and leeches, Green Hell has some incredibly memorable elements that tie well together with the lush forest and oppressive weather effects. Though the UI aspect of crafting is a bit off-putting, the organizational aspects are interesting, engaging, and immersive and lend well to the overall experience that Green Hell provides you with. While veteran survival players may only spend a dozen or so hours in the game, Green Hell’s approachability, storytelling, and immersively gorgeous graphical fidelity make it one of the most accessible and forgiving survival titles of today.