Released as an enhanced version of a game originally published in 2012, Touhou Azure Reflections is now available on PC for all you fellow bullet hell aficionados out there. With some interesting gimmicks that will keep more veteran players entertained, or striving for score, and a story mode that can be easy enough for newcomers, Azure Reflections certainly paints a solid picture for the genre.

I believe I’ve used this phrase before, but the Touhou series, and generally other bullet hell styles as well, can usually be summed up as “the most colourful death you’ve ever experienced”, and Azure Reflections is no stranger to that. A sort of “retelling” of the events of “Embodyment of the Scarlet Devil”, local lazy and forever in poverty shrine maiden Reimu finds herself once again trapped in the mist of the Scarlet devil mansion. Is Remilia up to the same old tricks? Has the maid decided to host a revolt? Is Flandre going to beat you into next century? The first two maybe, the last definitely.

While the traditional Touhou titles are top down auto-scrolling shooters, Azure Reflections is a horizontal shooter, allowing you, and forcing you, to shoot both forwards and backwards in order to dispatch those annoying fairies (yes, Cirno too). While the standard fare is there, choosing a character (if unlocked) and shot type to help you get through the mansion to resolve the incident, there is a fancy little barrier system, where you can pull up a barrier to absorb bullets and then make a sort of bum rush at the enemy in order to return that absorbed damage. This is in addition to the spell cards that give you the bullet clearing/high damaging blast and your standard shot. 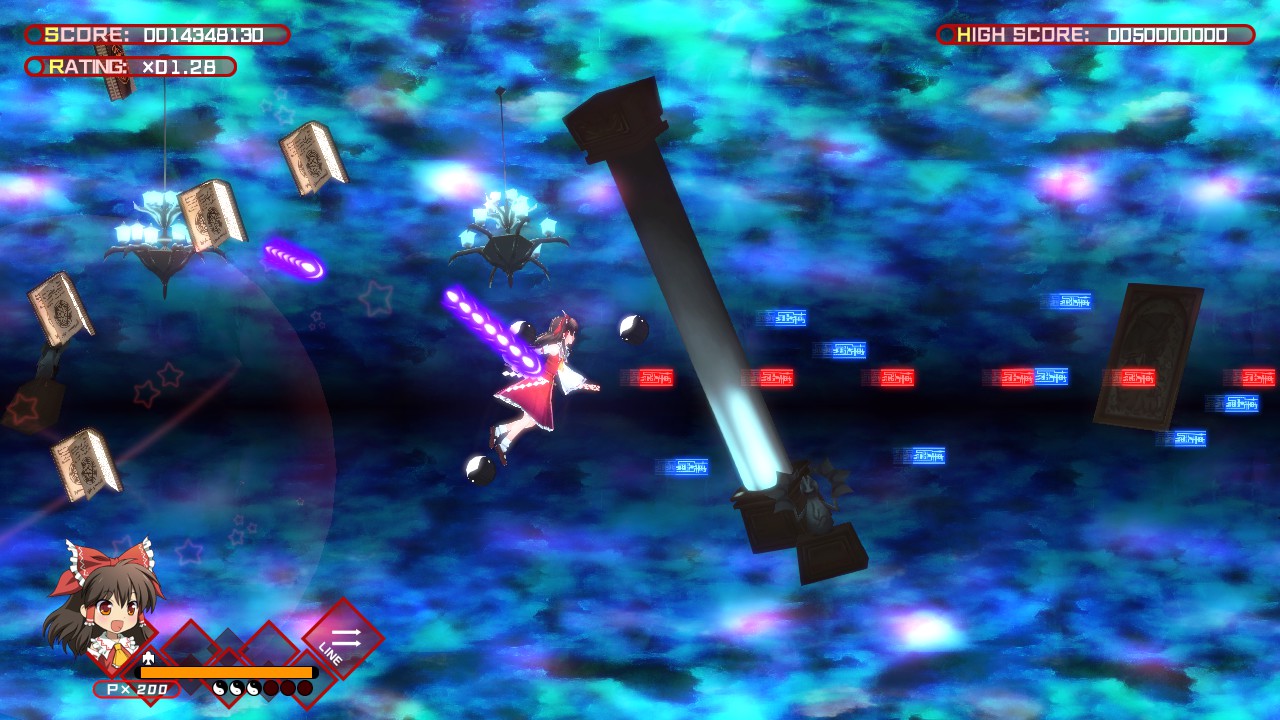 There are a few other changes to the standard formula, where you can actually take damage and recover your “hit point” as long as you don’t get hit within a time window after taking the first hit. This is a great system for newer players who need a little help learning the ropes (or those that aren’t as good at the games). Another interesting change for the newer or less proficient (like me) audience is that you can clear the storyline on easy. Yep, that’s right, you don’t get cut off for being a weenie this time, as long as you meet the other requirements (which they handily tell you if you fail to meet them). My biggest issue is trying to horde spell cards for no real reason. Probably because I want to earn the spell card bonuses. You can now also customize your appearance with accessories that you can purchase, which also happen to have effects attached to them, such as increasing the graze score bonuses. Are you all about the fashion, or all about the efficiency? Either way, there’s something there for you.

As can generally be found in the Touhou titles, the music is well done, with each character and stage having their own remix of the songs from the original Embodiment of the Scarlet Devil. The graphics are crisp and sharp in the standard anime style for the series, but come in multiple expressive variations. The neat little “cutscenes” during battles where the characters are duking it out are pretty cool too, and you can even unlock a model viewer and jukebox for music listening and character viewing. 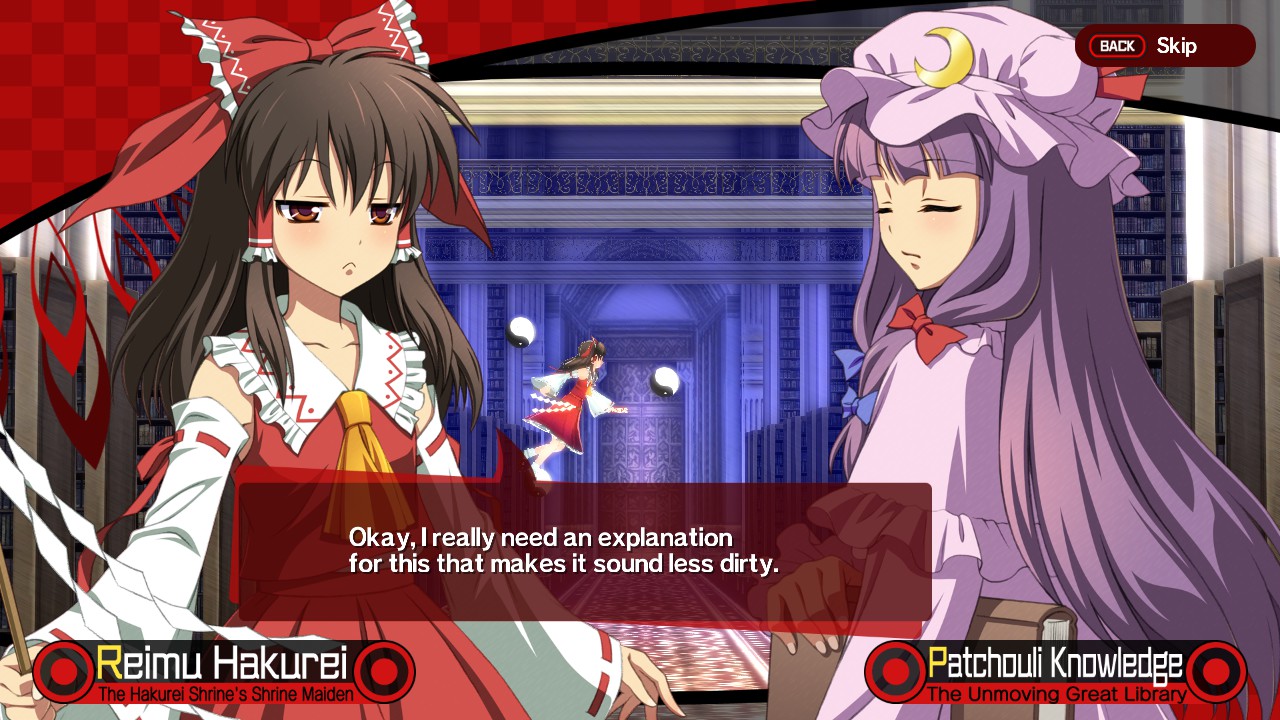 While the title definitely feels easier compared to some, or most, of the other Touhou titles, that’s what the harder difficulties and self imposed challenges are for! Seriously though, any game that has a difficulty called “Lunatic” with the description “for crazy people” you know is gonna be like ramming your face at a brick wall. Although Azure Reflections is relatively easier, except the stupid bats, there was a lot I really enjoyed about it.

One of the aspects of the Touhou series as a whole that is also applied to Azure Reflections is how the characters interact with each other. Usually there’s a lot of rather un-serious banter, a couple of puns or gags, and occasionally a serious line or two. While most of this can get lost in translation, whether official or fan, I’m glad to say that the banter in Azure Reflections was well translated and doesn’t fall off the mark of what I’ve come to love and expect from the series.

As a whole, Touhou: Azure Reflections is a bit of a niche title. Most people I know aren’t super big fans of the bullet hell/danmaku style games, and those that will play them don’t necessarily recognize the Touhou franchise. That being said, what it offers is not only true to its roots, but also offers its own twist to keep things fresh and interesting. If you’ve got a hankering for colourful bullets, a masochistic tendency to watch yourself get shot down, a desire for an anime-esque scrolling shooter challenge, or a fancy soundtrack, you can’t go very wrong with Azure Reflections.