You are reading
The Legend of Heroes: Trails of Cold Steel III – PS4 Review

The Legend of Heroes series is nothing short of a brilliant one. Whether talking about Trails in the Sky or Trails of Cold Steel, there’s brilliance in their design that just make them nothing short of Epic for the 50-80 hours that they take in order to complete. Having finally had the chance to sit down to the latest of the four chapters in that of the Cold Steel series, Rean Schwarzer is back again though this time he really has his work cut out for him. Recently graduated from Thor’s Military Academy, this alumny has turned instructor and it’s now his turn to teach a group of rowdy “kids” what it means to essentially be the heroes they’ll need to be in order to keep their country safe from those that would harm it.

Trails of Cold Steel 3 has been a few years in coming. Taking up about a year after the end of the second chapter, you’ll once again be following Rean and his new adventures as an instructor instead of a student. Having helped put an end to the war presented in the first two chapters and having participated in another one between the second and third chapter, this poor dogooder dubbed the Ashen Chevalier isn’t exactly viewed in the greatest of light as most people think he’s nothing more than a glory hog or someone that relies on the powers at his disposal. Finding out that Rean is really just someone who keeps happening to be there at the right time, this new teacher slowly starts to get respect from his students. Very slowly.

Part of the brilliance of the cold steel series is how it tells a story both through the vast dialog that would put some novels to shame, and the gameplay. If you look at each entry so far individually and together, they couldn’t be more different. One has Rean starting a school year, the other has him separated from his classmates and needing to travel the country to find them in the middle of a civil war and finally, the third chapter has him starting off his career as an instructor to a newly constructed branch campus of the military academy that he graduated from. When you look at it mechanically though, they are identical. In each case, you have the story rolling until you first “free day” which happens in the second chapter as your group relaxes after a successful mission. Once you’ve been given control on your free day, you are free to choose how many optional requests that you wish to actually complete as well as who you want to get to know better by using bonding points. Once those are over and the story resumes, you are once again going to have to dive through a dungeon before getting back on track and seeing the school year advance. It’s a formula that works, and that works well at this point. With different methods of how you get to that point, it keeps it feeling fresh and making you want to actually spend the time going through it especially with how long each entry can be.

What’s really neat about all of this for Cold Steel 3 is that Rean is no longer being told what to do from multiple levels. Instead, he only really answers to his board of instructors and the Principal. Having switched from being the one learning to the one teaching is also a neat shift as now Rean wonders what he can do to make it easier, what he can do to bridge the gaps, and what he can do to show that he’s not just someone who relies on his wicked powers (giant ancient mech named Valimar). It’s a nice change of pace that rekindles a bit of the first Cold Steel as it’s a similar town not that far away from the first, but different enough that it doesn’t feel like a simple copy and paste.

Adding into the new features, is that Trails of Cold Steel 3 has been fully designed for the PS4. I do have to question some elements that are still present like the fact that the gameplay itself when you leave it on standard speed is super slow and feels a bit like molasses. To get things really moving you’re going to want to turn on the turbo mode that had been added to the recent PS4 and PC upgrades of the original PS3 and Vita versions that first graced us with Rean’s story. I’m really not sure why the Turbo setting wasn’t actually near the default speed before being able to run around as it feels more natural in today’s gaming sphere. 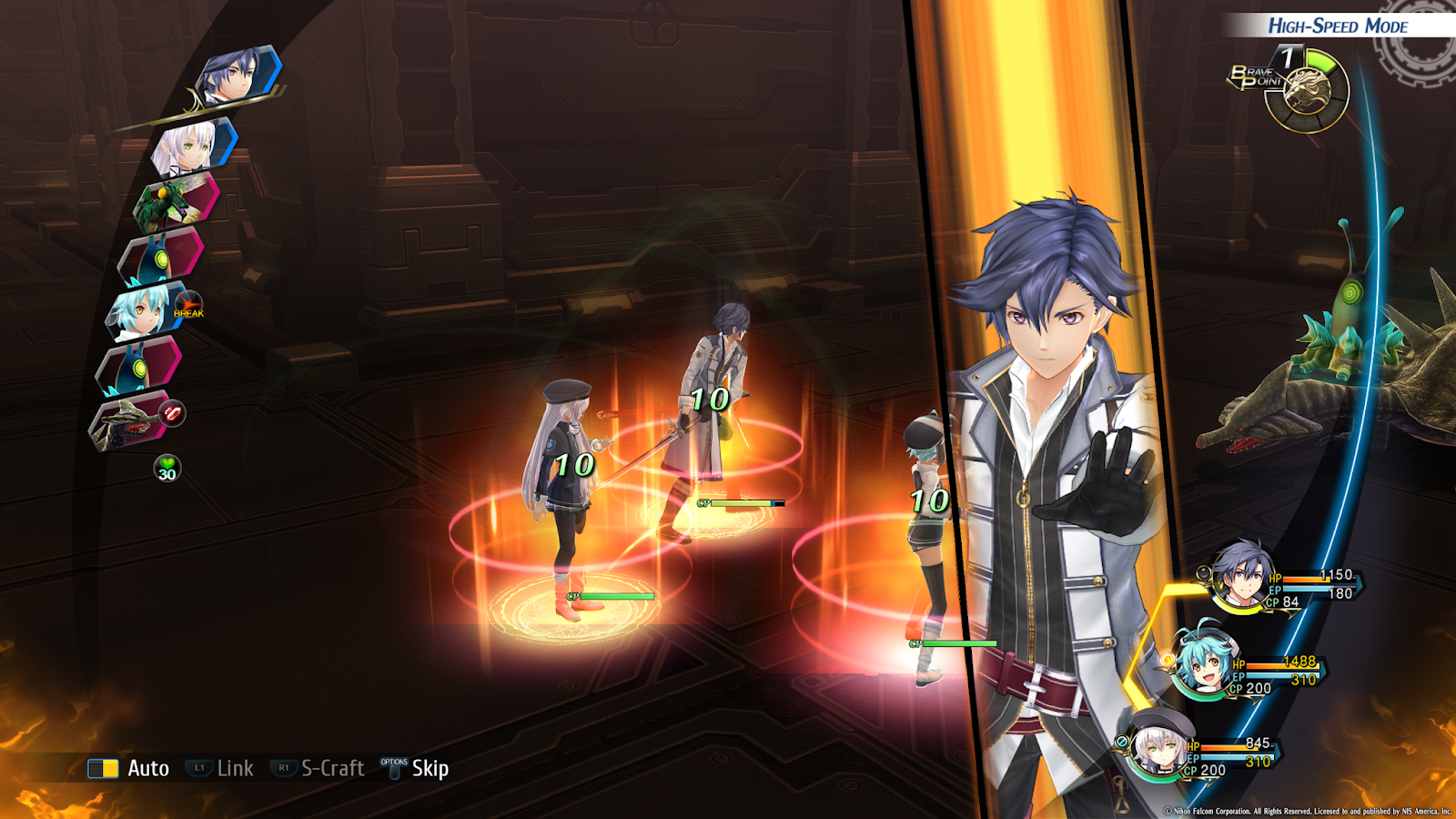 New to the board though is that not the Bravery Points (BP) granted for landing critical hits and following them up now have more uses. Originally, you could link for an Assist Attack which had your linked partner make a follow up attack. In the second, you still had this option but the option to do a full team rush with five bravery points which is the max. Now? Now you still have these options plus the option to issue out orders which can be the difference between winning and losing a boss battle. Being an instructor now, Rean’s decided that issuing order to capilitze on his student’s or allies’ abilities would be a good idea. And it really is. Orders which take BP to issue can raise attack or defense for a few turns. They can shield allies or have health restored. With Arts and Crafts both making a return, Orders add on that extra layer to the mix in order to both keep things fresh and to make things just that little bit harder for those already stupidly hard bosses.

One thing that’s changed, and in certain ways is for all the better but in certain cases for the worst, is the layout of your controls when it comes to battle. The main menus have also changed but more in a visual style than an operational one. Taking it from the top, battle menus no longer have to be run through a wheel left or right to decide what you want to do. Instead, everything is now mapped to your four buttons and the d-pad. Attack, Arts, Crafts, Items, Orders, Movement and the other two things I never remember are all now at your immediate fingertips instead of having to look for them. This change is one of the best things that the series could have added to the battle system as it really makes it much more robust and easy to do.

Where I’m a lot less happy in the new changes is that because it was designed with purely the console in mind, the text for battles is not so damned small that I have to squint at the TV and it’s a 55” 4K OLED! I wish I could say that I was exaggerating about the font size, but I’m not. It’s hard to see the number for your hit points which are the biggest and I’ve often had to move forward to see what my CP was so that I could decide whether to use a Craft or save just a bit more for the epic S-Crafts that either make or break a fight with their power. So between that and the gameplay speed, there’s a bit of a drop in the overall performance but is it enough to make one stop? Hell no. 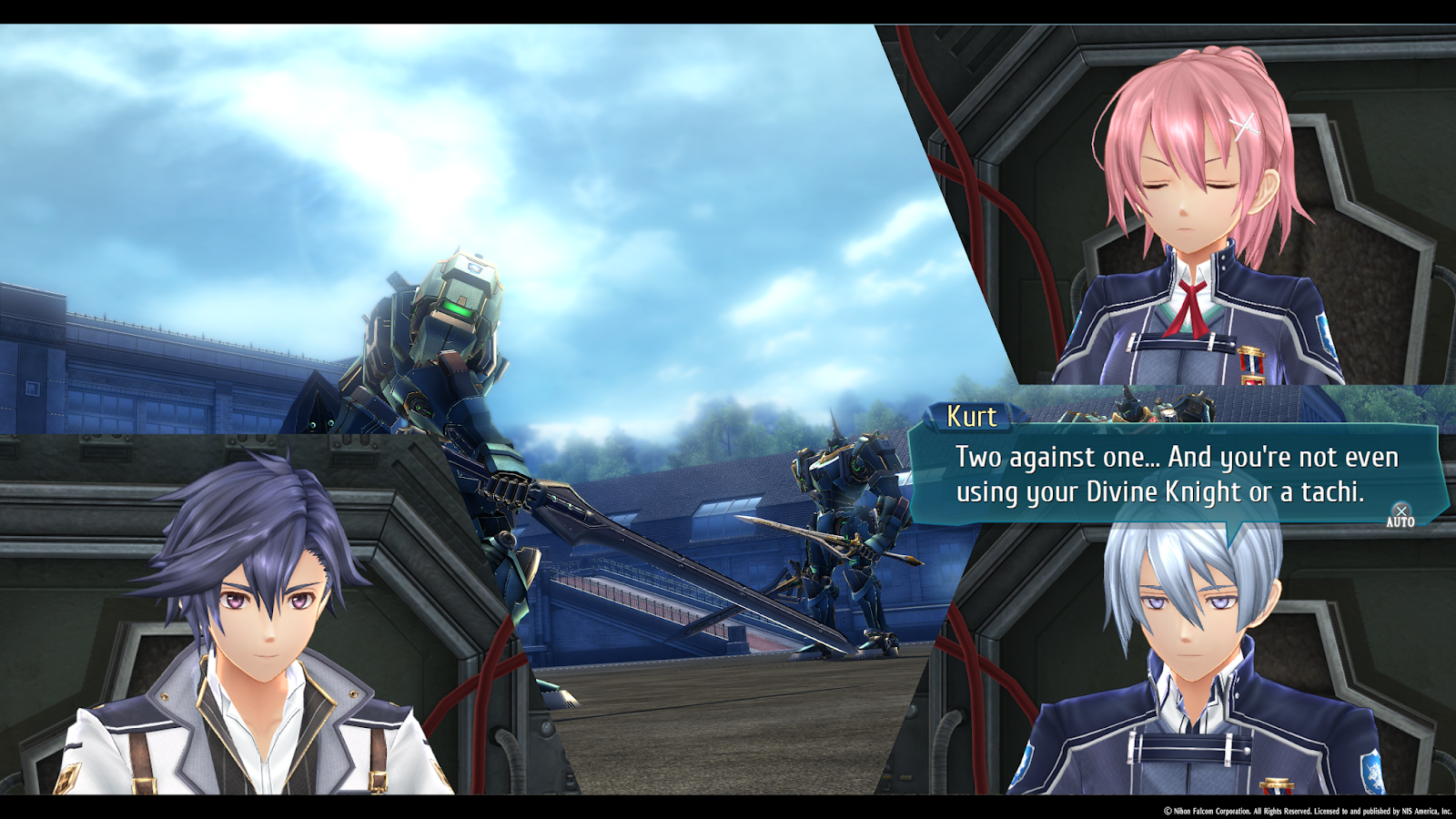 Finally, the last “disappointed’ is the fact that there was no carry over bonus from completed Cold Steel 2 data. While one could argue that the original parts were designed for the PS3/Vita, the recent PS4 remasters would have been the perfect opportunity to give something back for all of those playthroughs. Like a bit more Mira to buy alllllll of the presents available at 1k a pop when you only have just over three. This isn’t really a “complaint” as much as it would have been nice to have.

The Legend of Heroes - Trails of Cold Steel 3 is the perfect continuation for the series. With the first two chapters telling their story to completion it could be hard to see where things go next with the same protagonist but with his new direction in life? It works really well. From learning in the classrooms and the battlefield to teaching students about both, the only thing left is to wait for Trails of Cold Steel 4 and not spoil it for yourselves as it was released last year and it could be some time before we get our hands on it.