Promises are basically contracts and they are meant to be kept whatever the cost. Unable to keep his promise to a woman that meant everything to him, Valvatorez has for hundreds of years refused to take even an ounce of human blood. Having lost all of his powers because of this and become a lowly Prinny Instructor dood, hell soon both come back into power on a crusade against the Corrupternment who refused to allow him to give his graduating Prinnies the Sardines that he promised them.

Strategy game of the decade. I’m serious. Disgaea 4 whether in its first release or the various re-releases is one of the best damn entries in the Makai Series. It’s also an extremely solid experience full of tales of loyalty, revenge, and incredulous denial. Sorry Mao and Almaz, three was good, four was perfect. For a premise that at the time would have essentially been a Twilight spoof featuring a vampire, a werewolf and a teenage girl, the political ride that they embark on to overthrow a government was nothing short of brilliance in its craziness involving the living, the dead, and the in-between.

Known for its strategy, Disgaea and the subsequent entries into the Makai Series such as Soul Nomad and the World Waters or Maki Kingdom and Phantom Brave, have also struck a good balance with heavy strategic turn based combat and story. Loads of dialog between stages and even in stages themselves, it’s an element that can really make or break the experience because if the characters don’t resonate with one another or the story itself feels lackluster, then you’re left sighing between stages and just wanting to get it over with and out of the current five of the main series? Disgaea 4 hits it on every level. 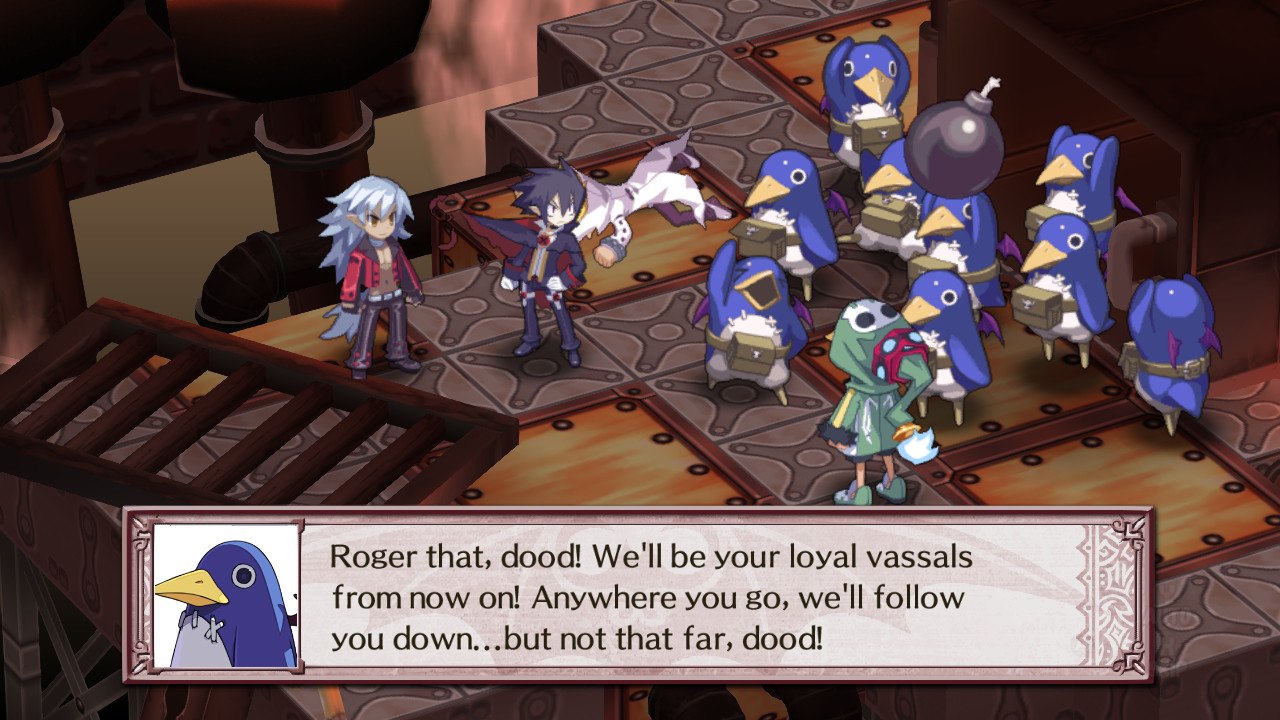 Like any good tale, ours starts off with Valvatorez being slighted in not being able to give his graduating Prinnies the deadlines that he promised. Fighting the warden of Hades, his boss, he finds out that he wasn’t even the returning Axel’s call, but that of the Corrupternment. Setting off on his crusade, it won’t take long to meet the rest of the cast such as one of my favorite females in gaming Fuka, and her sister Desco that her father built to help her take over the world. Over the top, the shenanigans take to the battlefields on some very solid turn based mechanics with plenty of grinding and more class changing and min maxing to keep even the most insane occupied until level 9999. At least until they reincarnate one more time.

Hitting the fields of combat, you can summon up to eight party members onto a square based environments that just get more complicated as the story moves on. Characters whether story based or class created all have different movement ranges and proficiencies with different weapons in order to dominate the battlefield. Swords, bows, guns, axes, spears, staves, fists and monster weapons are all available on top of throwing your enemy into a killbox or stacking your entire party for a tower of maximum damage. What’s always been great is that there’s no wrong way to do things and improving upon Disgaea 3’s change to how units learn their abilities.

Up until the point of the original release of Disgaea 4: A Promise Unforgotten for the entire theme behind Valvatorez’s decision and decline from the Tyrant he was once known for, characters would gain abilities by leveling up their proficiency with a weapon. For melee characters, this worked great, for casters? It was a little trickier as they would more often than not be using their actual spells. Moving into the new system, characters now learn and upgrade abilities with the mana that is earned for defeating foes. This can let you skyrocket a unit’s progression forward and even help you out if a particular stage is causing you grief because your team isn’t yet strong enough… item world. But what of the weaker ones? Mana is split between everyone so has defeated a foe, so if there was a combo? Everyone gets a part of it. If it’s a tower of your characters to beat higher level enemies mercilessly? It goes even faster! 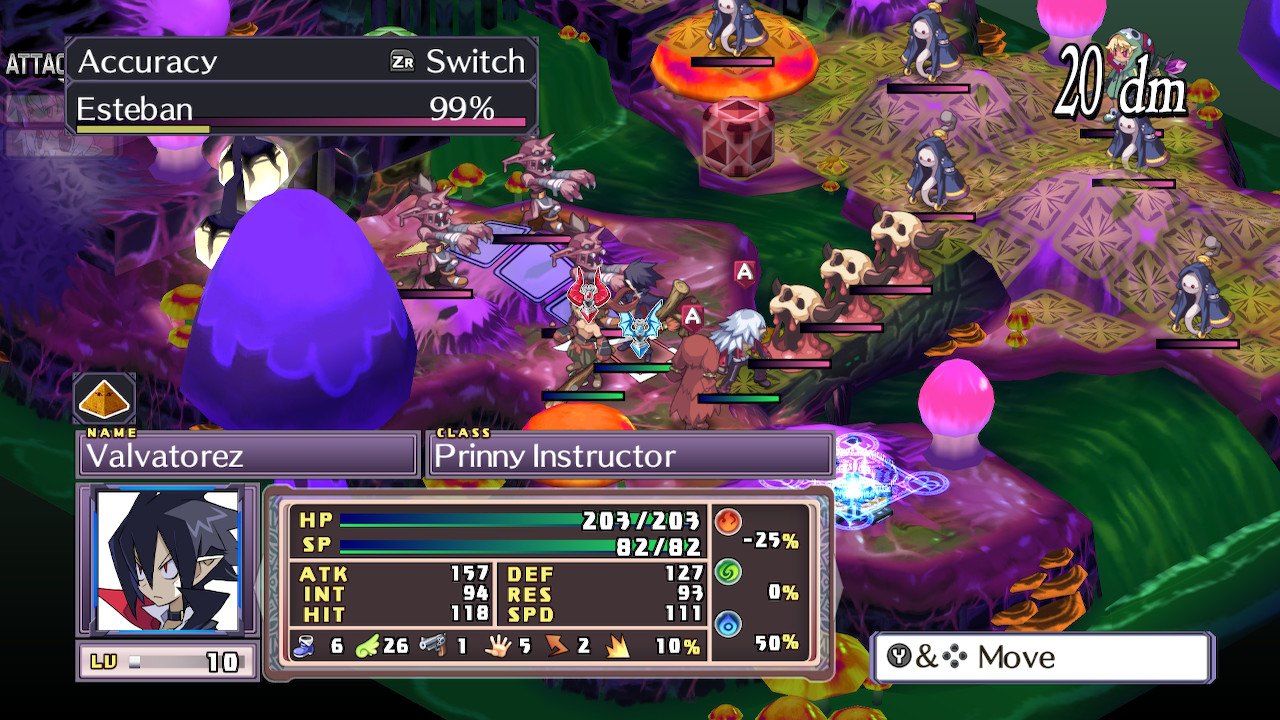 It’s abusing the system, yes abusing, that lets you propel forward in both the story and into the side stories that have been provided over time. All the DLC and additional characters are present, and as they start at level 100 and you have to beat them up first? Well you may want to work on your cheese tactics. This is honestly what has always made this series so damned good. The post game isn’t designed as an afterthought, it’s designed to be tackled head on and at all times past the initial unlocking of it, you have the item world that can be used to exp grind your party while simultaneously making your items more powerful. It’s a win-win, as long as you win of course.

Still technically a niche title, even if this is the… third re-release? Disgaea 4 was the first NIS title to hit the realm of actual HD sprites and it’s looking even more amazing on the Switch than it has so far. Having also re-released on the PS4 which Nick is covering, the Switch offers up a bit of a double experience as you can take it on the go and it looks just as good. Like most of the series, the PS2 entries of D1 and D2 were brought to the PSP while the PS3 D3 and D4 were brought to the Vita and in each case, care was taken to make sure that they would run smoothly. Furthermore, with D1, D4, and D5 now being on the switch, over half of the core series is straddling the netherworld both from the comfort of a player’s home to the on the go in the bus or in a boardroom between meetings. Yes I’ve done all of the above and there are no regrets. Both to playing Disgaea and where I’ve played it.

Whether it’s your first time getting to see the glorious adventure of Valvatorez, Fenrir and Fuka, or the third or fourth time, it’s an adventure that doesn’t get old. Because of its initial HD treatment, Disgaea 4 Complete+ feels just as refined as it did upon its original release. While some may find it a little harder to get back into after the vast changes into Disgaea 5: Alliance of Vengeance or the Complete version, for me? It’s going to be really hard to de-thrown this tale of politics and sardines from the throne that it currently sits upon.