You are reading
Legrand Legacy: Tale of the Fatebounds – XB1 Review

Legrand Legacy oozes nostalgia in the best possible way most of the time. It has that visual style and gameplay that reminds me of the earlier PlayStation consoles with their bevy of enjoyable JRPG’s. Despite many of the classic trappings of more successful roleplaying games from the past, Legrand Legacy: Tale of the Fatebounds is never going to be considered a true classic itself. It is a perfectly good, enjoyable experience, but one that is a bit too short and shallow to really be remembered once you put the controller down. However, if you have an itch for an old-school JRPG experience, Legrand Legacy should successfully scratch that itch for you.

I have to admit that things got off to a slightly rocky start for me and Legrand Legacy. Right off of the bat, I somehow wound up with a locked menu during my first fight in the desert right outside of the initial city. I have no idea how that happened, but pressing any and all buttons and directions on the sticks would not attack, move around in the menu or anything else. This was shortly after learning that my young amnesiac of a protagonist was… well… a young amnesiac of a protagonist, making this old-school JRPG just feel a bit old and trope-heavy right off of the bat. Finn is not necessarily a bad character, but he is something of a bland one as he relies on being a blank slate so he can ask lots of questions and help you, the player, better understand the world through the explanations he is given. 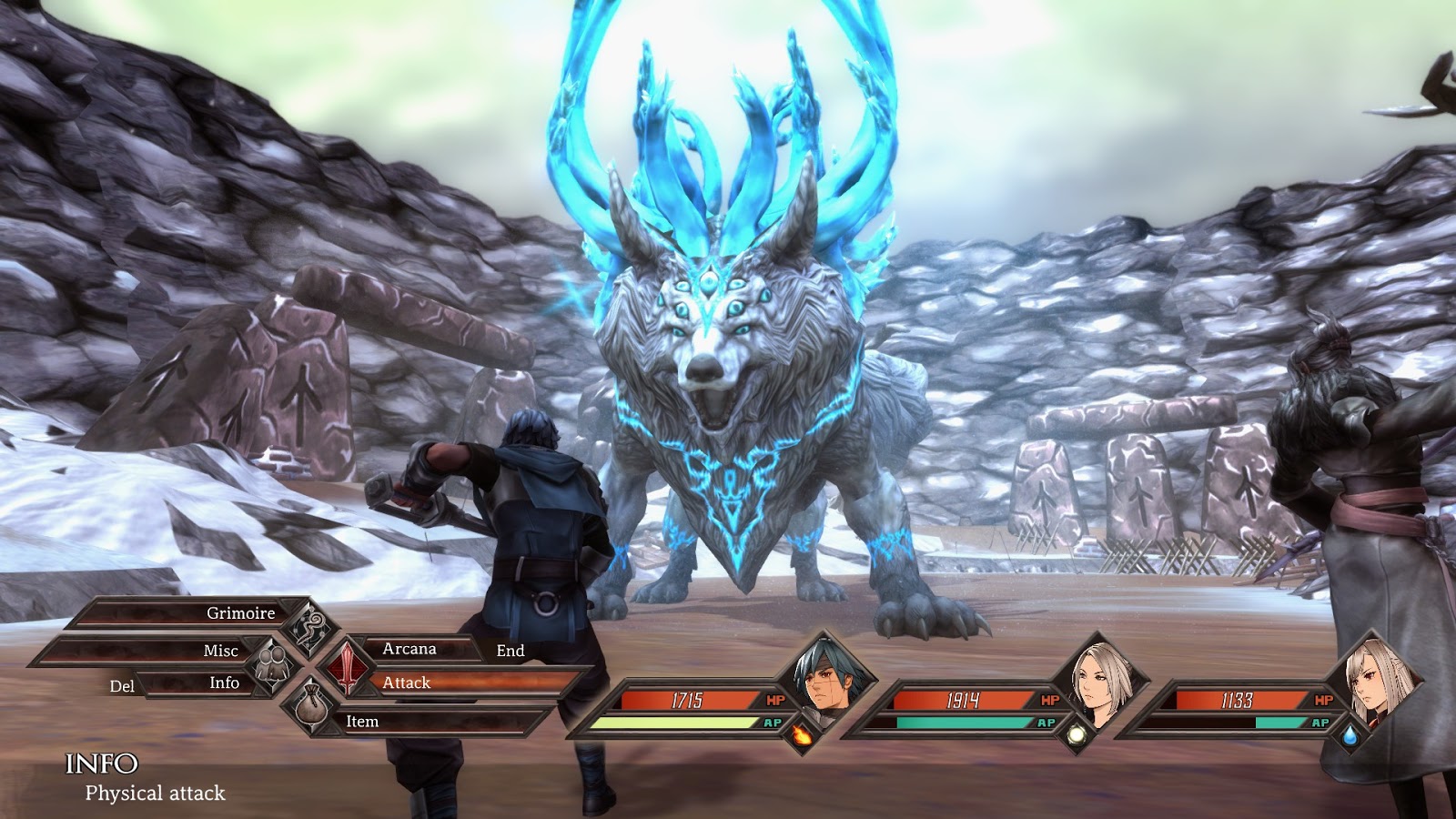 Narrative is pretty important in a roleplaying game, as you are generally spending dozens of hours with these characters as they adventure through a fantastic world exploring a variety of themes. By and large, Legrand Legacy is decent on this front. The dialog is a bit stiff and might have benefited from voice acting, and having to save the world as a chosen one is just as well-worn as the idea of a main character who has no idea where he is or whom he is. The world however, is beautifully realized and there is a real sense of depth to the lore as you explore underground passages, walk through burning sinkhole-filled desserts and learn more about the past and potential future of Legrand. Even little things like the generously sprinkled in restore points are discussed as the world leaking magical energy that is unhealthy for the world, but beneficial to your party of adventurers.

Combat is an interesting collection of ideas that comes together rather well. It is turn-based by nature, but it tries to keep you engaged via an active button pressing system. Pick your target to unleash an attack or skill on, and one of four random face buttons pops up on the screen. From there, two random slivers (think of them visually as narrow slices of pie), one embedded in the center of the other. A marker then appears on the button icon, swinging in a clockwise direction. Press the appropriate button with the broader slice, and you get a ‘good’ from your attack. Nail your timing and get the mush more slender segment within and you get a perfect, dealing more damage and restoring more AP (used for unleashing powerful ultimate attacks which also adhere to this timing mechanism to define their success). Fail to press a button at all or have your timing fall outside of the segments, and you get a poor result. Systems like this have shown up in other games, but it is a nice way to keep the player actively involved in what is taking place on the screen as opposed to JRPGs where the battles auto-resolve or simply happen after you make your selections from the menu, turning you into simply a spectator. Getting perfects never gets old, though it can be a little misleading. This is about the quality of the damage dealt and it was irritating to have Finn get a ‘perfect’ timing against a flying enemy who is weak to slashes, only to have the attack completely miss. Admittedly, that can be a little annoying at times and feels almost just a bit misleading when you should be excited by your timing. 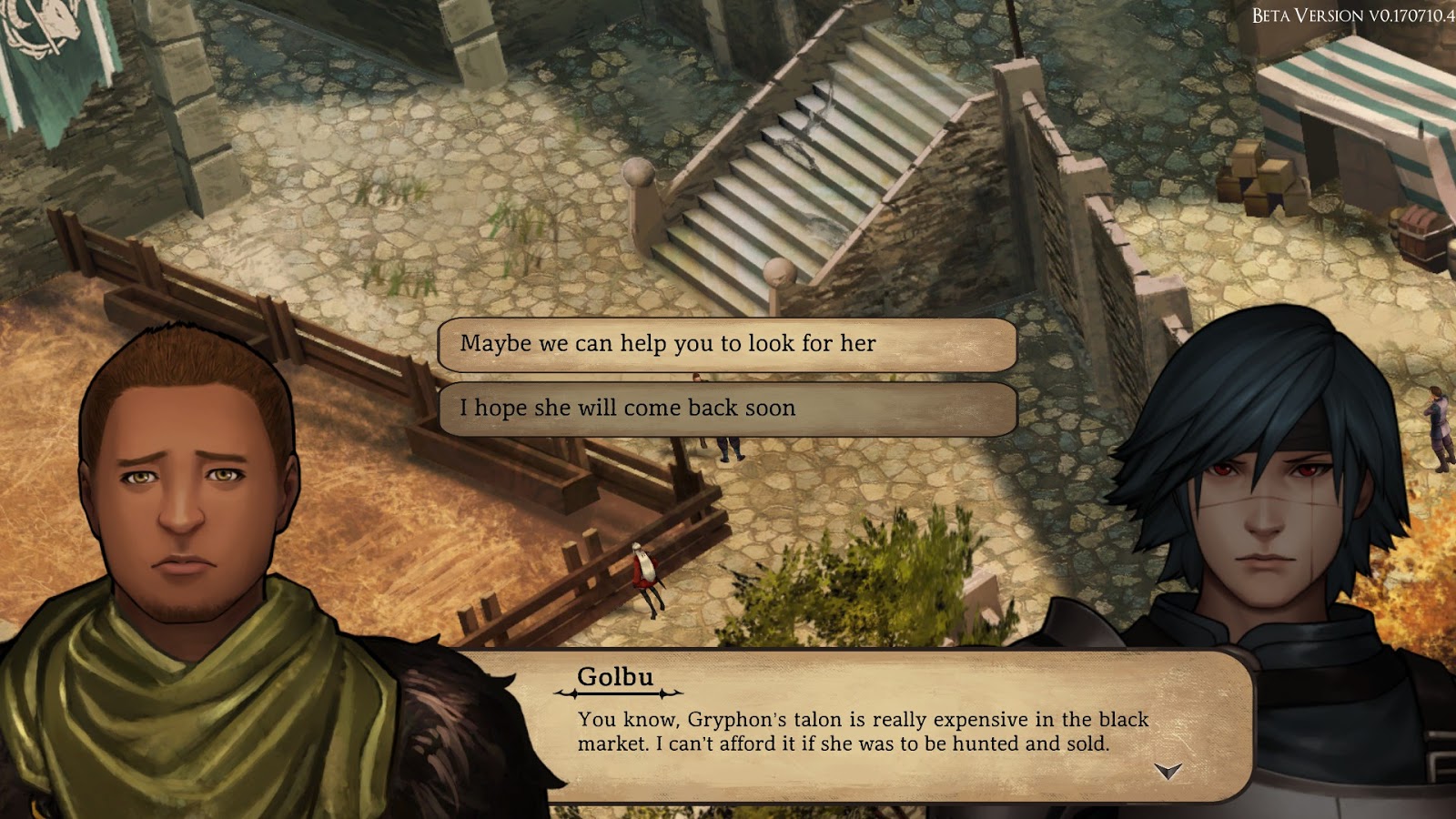 The other aspect of combat that has a decidedly Final Fantasy feel to it is the focus on resistances and vulnerabilities. Almost every type of enemy has some combination of these factors applied to physical and elemental attacks. Hit a sand creature with physical weapons that are not imbued with fire, and they may just shrug the attack off while hitting them with any type of magic can take them out in a turn. Thankfully investigating enemies is an easy item that does not require a specific spell or skill, so taking the time to get familiar with your opponents is almost always helpful. There is also a tactical element to character placement as you can enter battle with up to three characters at a time, with the traditional front and back rows that protect the squishier ranged mages and archers in the back while allowing your beefier tank-like characters to perform blocks (also with the timed system) if need be to shield them.

In terms of enemy encounters, these are tangible, visible enemies on the screen and not randomly generated battles. Get too close to an enemy, and they will make a beeline for you and if contact is made, combat is initiated. If they hit you from behind, you do not get to perform any actions during the first round. Tag them from behind, and they have a helpless first round. There are some exceptions to this rule, as specific enemies for quests or a particular storyline element’s progression are staged in specific spots or rooms. I will say that while there are a few different levels of difficulty, as a rule combat never really felt all that difficult. I tend to grind a lot, fighting pretty much everything in my path. This was especially true in Legrand Legacy, due to the brisk pace of the combat itself, so I never really felt under-leveled for almost all of my encounters. If you really find yourself up against a nasty character, just guard a few times while building up AP to unleash ultimate attacks and then lather, rinse and repeat as needed. 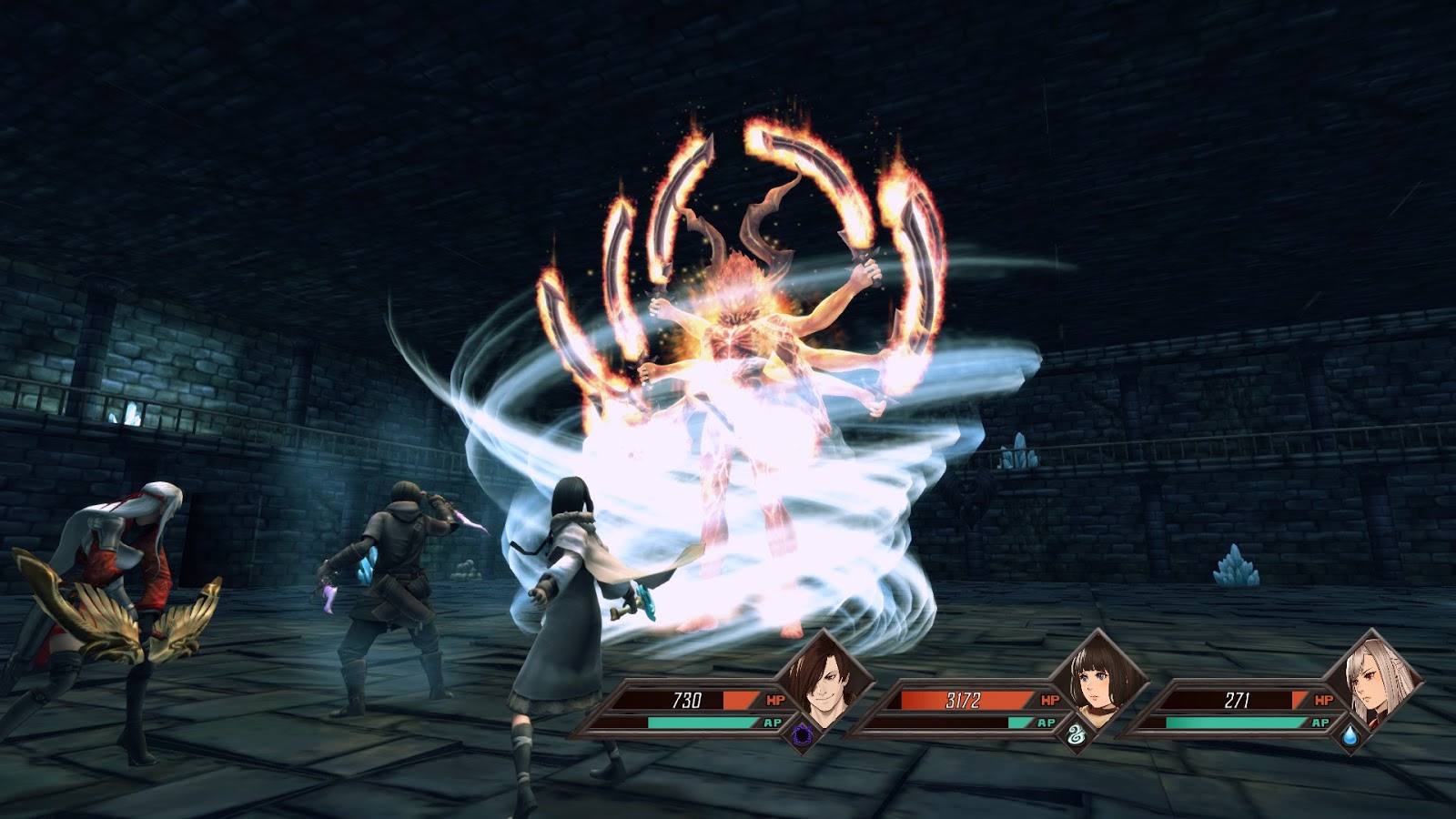 There is a bit of additional variety sprinkled in via a more tactical, grander scaled skirmishes that are introduced a bit later in the proceedings. It is not terribly deep, but it works well enough. Additional detours such as fishing or side quests also abound, though the side quests often feel somewhat like missed opportunities. Even if the primary characters are somewhat dull, I had hopes that the interesting world around it might become somewhat better fleshed out by these side quests, but they seldom really add much texture to what is taking place. There are times here and there that the side quests are genuinely interesting, but the majority of them are some combination of simple fetch / kill / provide X number of items quests.

That is a bit of a shame, because the world itself is not only interesting in the details sprinkled in throughout the experience, but also in how it is visually realized. Characters are a bit on the dull side in terms of appearance and animate while gliding around much richer environments. Old tombs, busy jungles, sprawling desserts and more are brought to life with a painted aesthetic I really enjoyed. The music is solid, even a little catchy at times which just makes it feel even more like a throwback to the golden age of JRPGs. 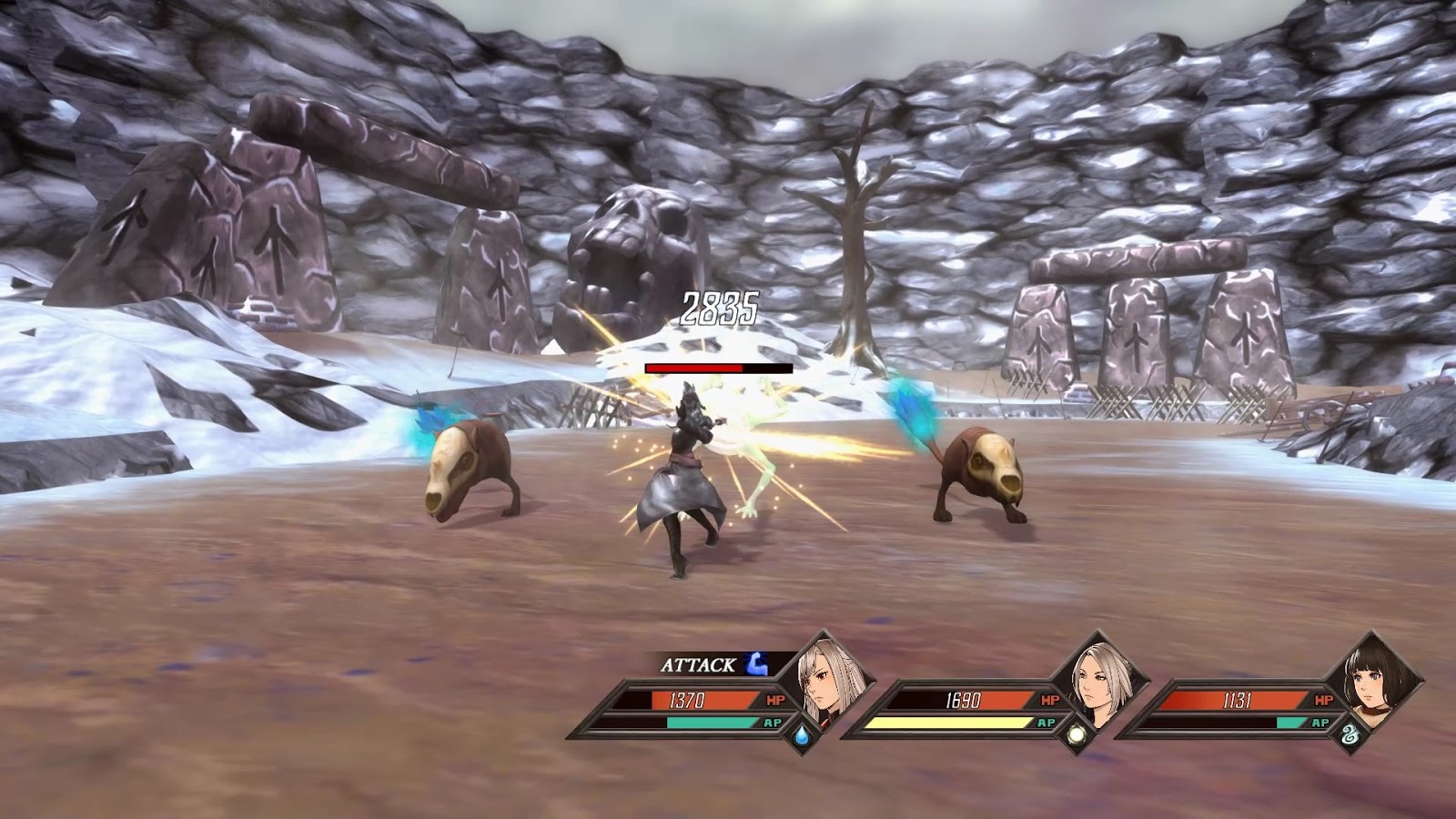 The controls and menus are something that certainly took a little getting used to. Inventory management is pretty gnarly at times, and the way pressing on the analog stick or using buttons can advance and select things during combat was a little strange at first. I eventually got the hang of it, and I appreciate that the design is meant to make command selection snappy, but for whatever reason I just found it awkward for the first few hours. Considering that this is not a terribly long game by any means, that makes those first few hours a rather large chunk of the experience.

Fans of the JRPG genre are the target audience here, especially those who have an appreciation for titles from a couple of generations back. The good news is, this is a genre that generally ages rather well, and Legrand Legacy: Tale of the Fatebounds is a welcome throwback to that era. Still, a bit more effort put into developing the characters and steering away from some of the overly familiar tropes of the genre would have gone a long ways toward making Legrand Legacy a more memorable overall experience. It is fun while you play it, but falls short of the unforgettable games of the past it tries to emulate.