Welcome back everyone to Heavenly Host Elementary School, the location of death, dismemberment, ghosts, murder, and supernatural quasi-underworld. Once again you begin the journey into the school of nightmares, all in a ploy to bring your friends who died there back to life.

If you aren’t familiar with the Corpse Party universe, or like me you’ve been slacking on it and need a refresher course, worry not, for the game does a decent job of summarizing the major points up until Blood Drive when it’s needed. The basic premise is that prior to the start of Blood Drive, a group of friends performed a spooky ritual that was said to be able to bind those who perform the ritual together as true friends. Unfortunately, not so much, as it actually just brings the performers of the ritual to another dimension that acts as a “killing pen” for a vengeful ghost. This happens in one of the previous titles, and a group of the friends manage to escape, although not without casualties.

In Blood Drive, the main focus is on Ayumi Shinozaki, one of the escapees who has some form of spiritual power, and was the one who was tricked into getting her friends to perform the ritual previously. Now she wants to return to the school of horror and rickety floorboards in order to find a grimoire that will allow her to resurrect her friends. 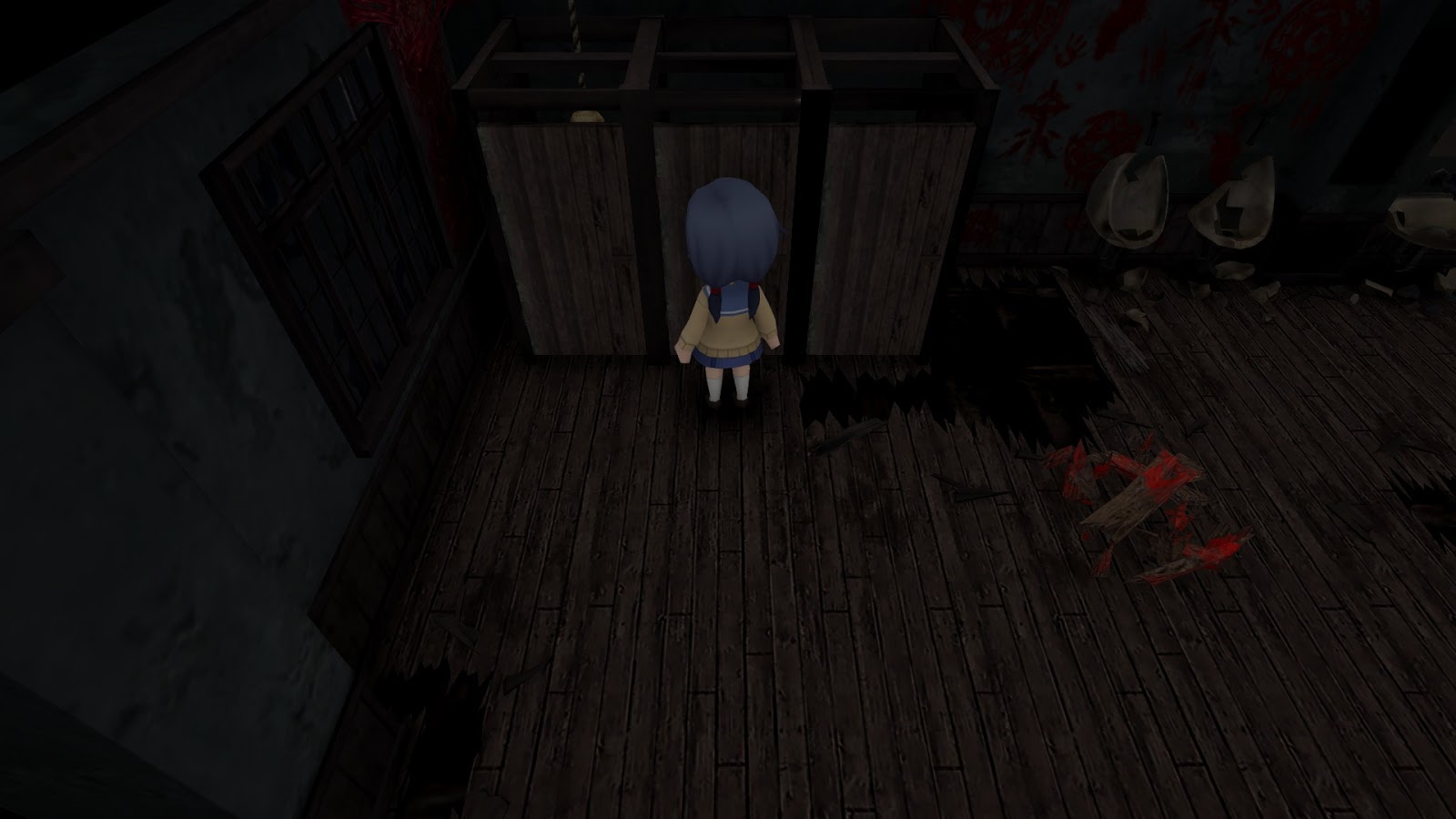 Evidently enough in a survival horror game, this isn’t exactly a jaunt in the park, as the school is full of sharp pointy floor protrusions, malevolent spirits, monsters, trip wire traps, and some really sketchy floor construction. It’s your job to guide Ayumi and the other characters through the murder school, collecting items, running away and hiding from ghosts and monsters, and trying, and probably failing, to avoid the unreasonably invisible trip wires. Blood Drive takes place in chapters, each one building on the previous, where you need to explore the school to find objects to open up more of the school, or to find somebody else trapped in the spooky confines of the bloody halls. Armed with only a flashlight and any talismans you find on your way, you need to disable the traps, slap talismans on the ghosts (that can be dealt with), and find the Book of Shadows that will allow you to resurrect your friends.

Now let me just state right here that I’m a big wuss. Horror games freak me out and I get super jumpy. Add this to the fact that I always want to explore everything I can and this makes for what others have called “hilarious free entertainment” while giving me a horror title to play. While Corpse party definitely isn’t as spooky as some more realistic titles, Blood Drive being an isometric with chibi-like anime-styled characters, rather than the monsters, what spooked me out the most was generally the atmosphere, followed shortly thereafter by accidentally hitting a trip wire or stepping on some pointy objects I didn’t see because I was conserving flashlight battery power. The monsters and evil spirits? Not so bad until chapter 4. Chapter 4 and onwards? I really want to give the design crew a flying lariat.

I see where the idea came from, you’ve got monsters and spirits chasing you, so you need to hide in closets interspersed throughout the school and wait for them to lose track of you before you can emerge from cover. There are a couple glaring issues with the implementation here though. First off, the monsters and evil spirits have a detection range that includes “off-screen”, meaning they can, and will, rip you out of a closet and beat you if they spot you hiding. Problem two is that they’re deceptively speedy. No seriously, they can freaking book it like a track team member. For the evil spirits it’s…I hesitate to say “better”, but talismans will basically eliminate the evil spirits that appear as dark shadows, however both the talismans, and as far as I could tell evil spirits too, are limited, so pay attention with that. 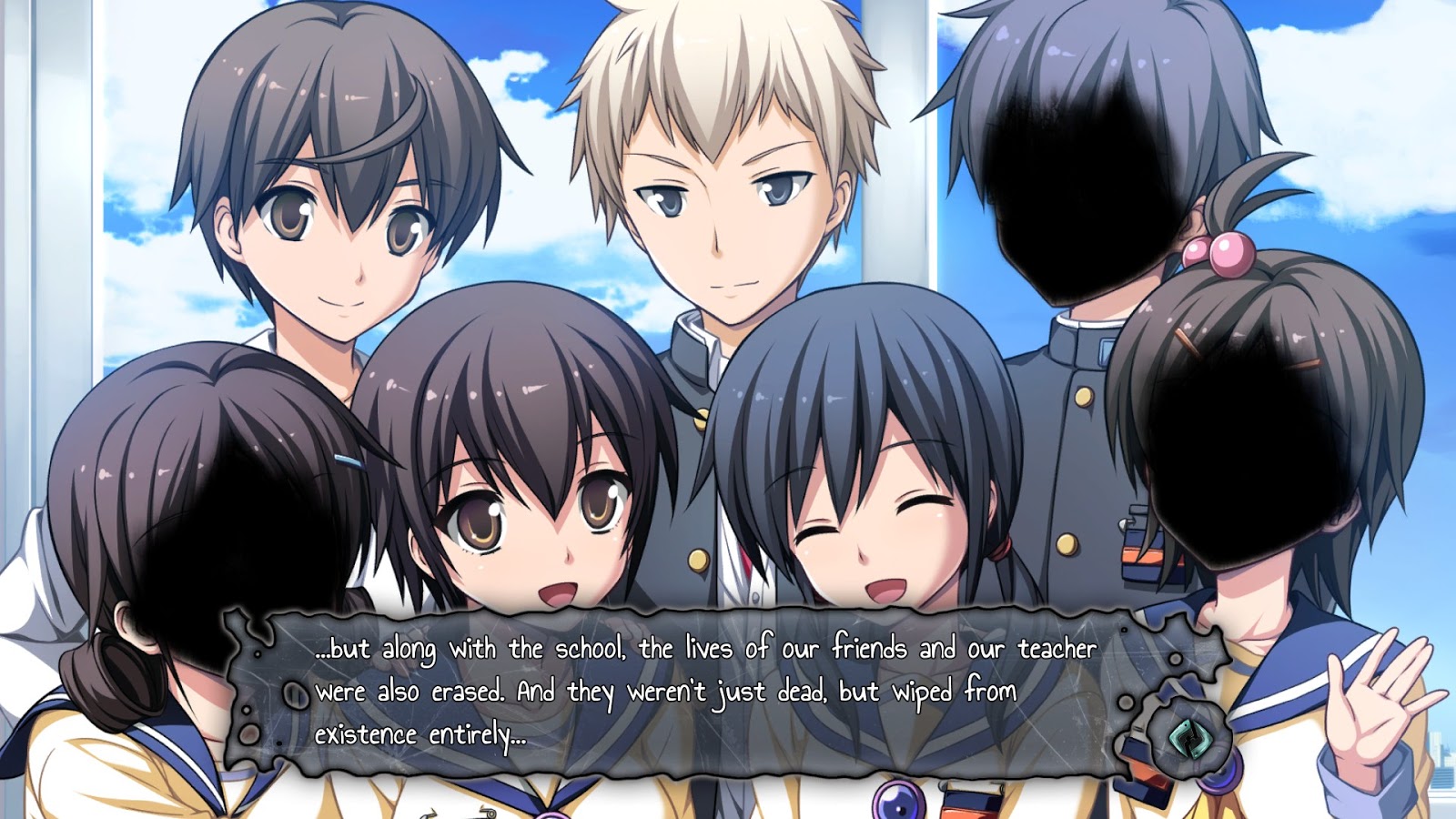 The third, and arguably most glaring issue, is the sheer volume of evil spirits you can have chasing you at once. Even through cut-scenes. I think my record was about five before I said “screw it, I’m loading a save point” because these little buggers are freaking relentless. More often than not I found myself running out of stamina and then a surge of just black would chase me faster than I could get away as I tried to make my way to a closet to hide in. The only way “around” this I found was that saving and loading resets a spirit to it’s original spawn location. I abused the heck out of this, and anyone who knows me can say that I really don’t like abusing a gimmick or glitch unless I’ve proven I can be almost as effective, or more, without it. Not here, no way.

While the atmosphere, music, and storytelling have always been something I’ve really loved about the Corpse Party series as a whole, Blood Drive feels bogged down not by gameplay mechanics, atmosphere, or story telling, but by whatever douche rocket decided to program the evil spirits the way they did. Once you learn where the spirits hang out it isn’t so bad, bad it honestly got so frustrating trying to repeatedly run away, and failing miserably, that I legitimately almost just stopped playing right there. There’s plenty of depth to the game, whether it consists of the storytelling or finding the name tags of previous Heavenly Host victims scattered throughout the school, so it feels a real shame that I didn’t enjoy playing this as much as I was hoping to.

If you ask whether Corpse Party: Blood Drive is a “good game”, the answer would have to be “not really”. The story is engaging and the characters are all fairly unique in their own rights, and there’s enough back story given to you in-game and in the dictionary you get that you shouldn’t feel too lost while playing. Unfortunately the game takes a hit for how infuriating the chase mechanics can be. Especially when coupled with some often rather vague directions and arbitrary backtracking that doesn’t always make sense as to why it was needed in the first place, and Corpse Party: Blood Drive just can’t squeeze itself out of a really mediocre feeling. It’s a nice sort of wrap-up to the series, or at least the “Heavenly Host saga”, as a sequel series has also been released recently in the west, “Dead Patient”, which you’ll probably see pop up on the review site shortly after this, so it does round the series out for those who’ve followed it this far.