Cat Quest II is the much-awaited sequel to Cat Quest, from a couple years back, as the name suggests.  It isn’t a true sequel, mind you, because you’re not playing the same cat.  Except you kind of are?  You arrive at the port adjacent to the catpital, after a long and arduous journey, to the world once more.  People seem to remember you, but they also don’t really seem to remember you as well as they should as the savior of the world from the first game, so … what gives?

Felingard and the Lupus empire are at war!  Each great nation is ruled over by a fearsome and warmongering monarch that seems more interested in wiping the other empire from existence than in enriching the lives of his own subjects.  You start off in Felingard, at the aforementioned Catpital, and it’s up to you to figure out what is going on, why you don’t remember anything, where you’ve been for so long, and just how to go about thwarting King Lioner.  Along the way, you’ll delve into caves, complete sidequests, and make your way to the Lupus empire, where you learn about Lord Wolfen, the monarch of the Lupus Empire.

In the Lupus empire, you learn that not all dogs go to heaven, but not all of them are all that bad, either… they’re just doing what they’re told, and reacting to the only information that they’re given… that cats are arrogant and holier-than-thou.  But you see, it’s not all cut and dry.  There’s cats that are drugging and mutating fellow felines, dogs that are adopting cat refugees and lying to everyone, and even mobile troupes of both species that simply travel and play music together.  The social commentary that they’re not really all that different, and certainly not as evil or strange as they had each been led to believe of the other species draws some remarkable parallels in reality, but this game doesn’t exactly bludgeon you over the head with a clue-by-four about it, either! 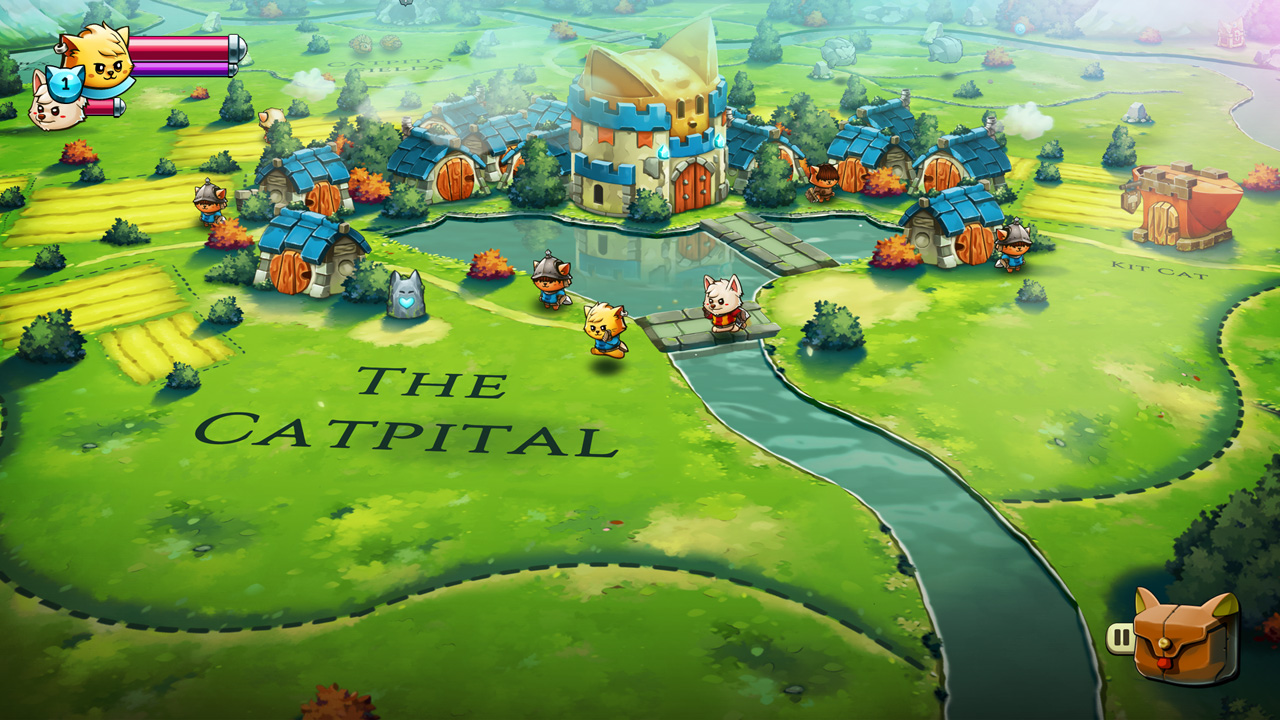 The gameplay itself is, for the most part, unchanged since the first.  You can attack with your weapon, chain a combo together with that, dodge roll, use one of four equipped spells.  THEN you have the swap character button, which alternates between your adorable cat hero and your moderately tolerable doge hero.  He’s a good boy, really… it’s not his fault that dogs aren’t as good as cats, and you shouldn’t hold it against him!  There’s two kinds of weapons, which are melee weapons and staves/wands.  The former behaves much as you would expect, while the latter provides an infinite-ammo ranged option that usually powers up your magic stat (allowing your flamepurr to hit harder, for example), but also regenerates twice as much mana per hit as the sword.  This allows you to choose between the ‘in your face’ attack-flurry-then-roll-out gameplay, or the ranged hit-and-run, then nuke them with a massive space lazer style of play.

The space lazer is gross, and I killed the final boss with a single cast of that along with the vacuum spell that pulls enemies in and holds them there.  Swapping between the cat and dog, though, allows you the option of equipping each hero with a different loadout or gameplay style, and different spells on each to boot.  So your mage cat (or dog) can handle healing, mana regen, and massive-but-slow damage, while your fighter cat (or dog…) can shake it up in melee with a huge sword, and all the damage reduction in the world with damage bubbles, attack buffs, a damaging melee aura, and more.  This is a linearly incremental addition to the game, but executed with the freedom that allows the build options to grow exponentially.  That’s just solid design.

This game is one part dog, two parts cat, one part adventure game, and about thirty seven parts pun.  Honestly, if puns bother you, especially cat/dog puns, you’re going to have a bad time playing this game.  I loved it, personally, but some of them felt like just too big a stretch.  Sure, the Labrathor vest and helm were fine, but Pawlonjir is just … Pawjolnir?  Mjolnir, okay? but punned up to the nines.  The Purrsecutor is by far the better punned up weapon anyways. 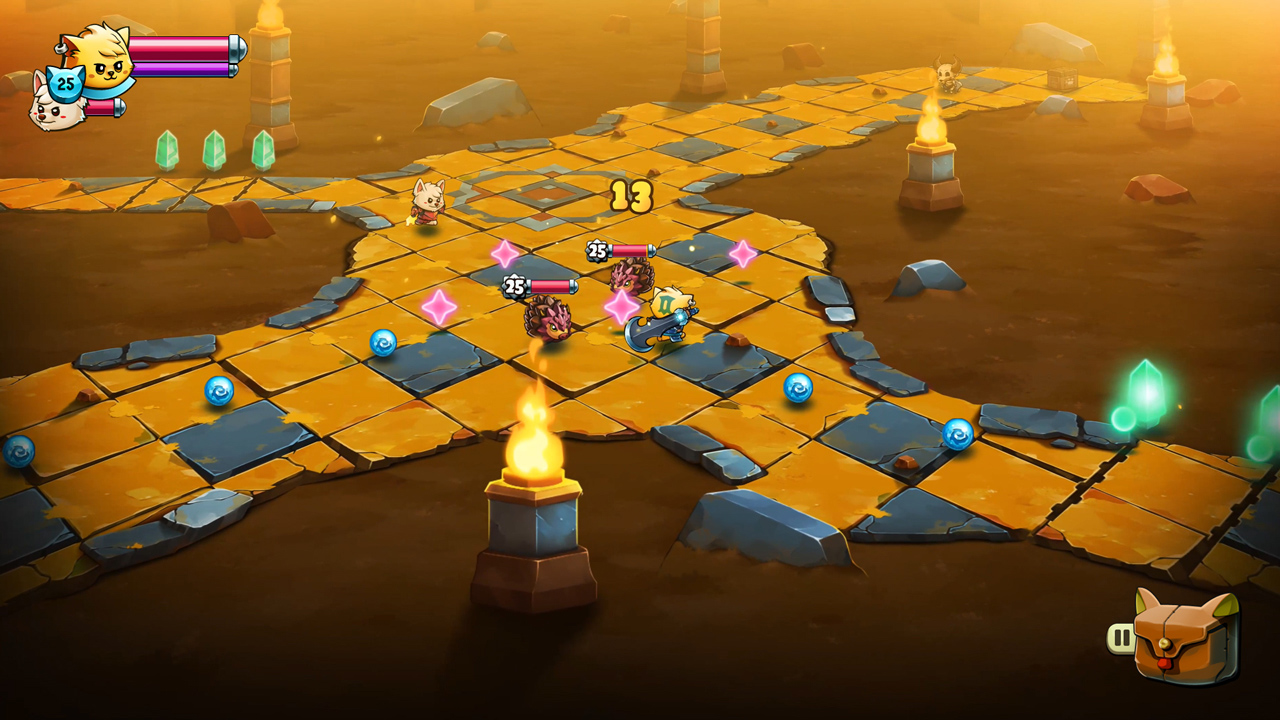 You’re going to want to play this with a controller, if you’re on anything non-console.  Just trust me on this one.  The controls on the switch just felt purrfect, especially with the wireless pro controller.  Each of the four shoulder buttons is one of the four assignable spell slots, while attack, roll, interact, and switch are the usual action buttons of A, B, X, and Y.  + is the menu, as you’d expect, and – is the map.  Now imagine, instead, wasd, shift, 1-4, space.  Ew.  This game was meant to be played on the switch, especially with your options for a ‘Player 2’ to control the other character, instead of alternating play.

This game is the cat’s meow and dog balls rolled all up into one, with a cute art style that feels so warm and genuine, along with music that always seems to suit the mood.  Caves and dungeons feel ominous and mysterious, while the overworld feels light, whimsical, and adventurous.  There isn’t a single negative feeling in this game that isn’t overcome and replaced with the whole ‘light and warmth’ message that The Gentlebros seem so fond of.  In today’s day and age, that’s a welcomed feeling that a lot more developers could stand to do once in a while, even if just to change it up from all of the angsty dark brooding edgelord plots that saturate the game market.  Want a game to play with your wife or kids?  Play this.  Want a game you can play for ten minutes a day on lunch breaks but still feel like you’re accomplishing something?  Play this.  Want a game that looks just as good on the go as it does docked, because they made everything cute, instead of gritty and photorealistic?  Play this.  At the very least, watch an LP of it… and THEN go play it.

The gameplay is simple, but diverse… and the game is as hard as you want it to be.  You can stick to the main story and face a challenge, or you can do every side-quest in sight, explore every cave, and power-level your way to endgame state before you even visit the Lupus Empire.  But whatever you do, just play this game. I loved it, my wife loved it, even my cat loved watching me play it.  Now pounce along and go get this purrific title.