You are reading
Rain of Reflections – PC Review

Notes: If you want to know more about Rain of Reflections, which only has three episodes planned, please check out the website or purchase it on Steam. Please note that Rain of Reflections recently updated to be only 9.99 Euros for each episode, $10.99 CDN, and $9.99 USD. Lionbite Games can be found on Facebook, Twitter, and YouTube, so be sure to follow them!

Welcome to a dystopian cyberpunk-esque world where players take on the role of Wilona who lives in a world where humans have become completely infertile. She is a scientist that has been helping to work on the problem in order to keep humanity alive – herself included. To achieve this, Wilona enters a dialogue with her mother to move out of OneCity into a place where the ministers’ role will not be diminished. Instead, players are tasked with helping the only natural born child left escape from the experiments, ignoring your mother, and beginning your adventure.

Rain of Reflections is a point and click story based game that has some elements which are not used in many games of its type. There are plenty of titles that rely on the choices that players make in order to show off the premise. In RoR, players not only get to choose dialogue options – that will alter the course of the game – they can stealth through encounters, and hack into various systems! In fact, even though there are all three of these elements in the game, I rather enjoyed my experience… Until I reached the end of the episode… I NEED TO KNOW MORE. YOU CAN’T JUST LEAVE US LIKE THAT! *Ahem* Excuse me… Let’s talk about the Encounters, the hacking, and the story.

The encounters in RoR are turn-based, so players get a certain amount of movement squares, motivation, and abilities to deal with. Wilona is able to perform two actions per turn – in fact, so can her friend Luca when they meet up later in the game – where players can choose to attack, speak, or move. She is able to speak or move twice per turn but is only able to attack once per turn.

Wilona has a special ability that is introduced to at the beginning of the game, which is a cloaking ability. It only lasts for one turn and dissipates at the start of her next turn. It’s best not to stand in line of sight of enemy bolts (re: security) or pay the consequences! Anyways, the cloaking ability does not consume an action, meaning that players can cloak, move, and then shoot – which is really handy if you ask me! If, for some reason, your character is sighted after uncloaking or moving, then encounter does not automatically fail – a feature I appreciate. Players are able to continue to play the game as long as they don’t die. (I mean, this should be an obvious statement, but you never know…)

When players are with Luca, and the two of them are in combat together, they can use a speak command as one of their turns. This is another important feature of the game because speaking can do one of three things: boost their own morale, boost the morale of the party members, or decrease the motivation of the enemy bolts. Each of these are integral to the survival of Wilona and Luca as the game progresses forward, especially because of the way ‘health’ is handled in RoR.

Unlike most games, the health bar is actually a motivation bar and it is the driving force of the encounters in RoR. It is an all in one package way of running encounters without creating a complex combat system. With it, players can deal damage or heal themselves without the use of multiple extra abilities, whereas traditional games where attacking and healing are separate abilities an require cast times or line of sight. Because motivation can either increase or decrease during an encounter, the use of multiple abilities beyond cloak, move, attack, or speak is completely unnecessary. It also means that developers had an easier time creating an easily balanced combat system. As one would expect, motivation can increase from pep talks and hiding behind cover. Motivation will decrease if players are shot, robbed of their cover, or taunted by the enemy bolts.

While the encounters are not particularly complicated in RoR, they are unique to this game, making it a combat system I enjoy.

In RoR, the hacking is both interesting and highly irritating at the same time. But before I explain why, let me explain how the hacking is achieved in RoR.

There are three types of hacks:

And each type of puzzle is presented in the story as a way that can make saving the child easier or harder, depending on if players succeed or fail to hack into a machine. So to explain, the reason players use the hacking system are to help out other people in the area (because, you are a nice person , after all), listening in to the bolt communication lines, or disabling barriers. Even in this slightly futuristic game, hacking is not the most legal method of acquiring information and such, but most often the NPCs will turn a blind eye.

The sound puzzles were more infuriating to me than any of the others, because players press a button to see the sound waves, and they must move towards it. The key to solving these is to land on the grid square that the sound emits from. It is only a pain when players realize that later in the game, they have less moves to find the sound. And if there were any hacking puzzles that I failed more than the rest, it ended up being these since it is all too easy to move to the square right next to the one that is correct.
Racing puzzles are also done on a grid but what players are doing is outrunning the security system from reaching them. To do this, players click on a space in a 3×3 square. If they choose the three closest to them, then the next 3×3 square will appear on the next line, not progressing further at a faster rate. Should they click on the second line, then the next 3×3 grid will appear a couple of squares away from the player (who is shown as a ball, by the way.) And the third row would start the next 3×3 grid three spaces away from the ball. These puzzles are solved when the player has dropped the ball in the hole and in later levels, it can only be reached by bouncing the ball off walls. Strangely enough, these were my favorite hacking puzzles.
The final type of hacking puzzle is the rubik cube puzzles. These puzzles require players to manipulate a digital version of a rubik cube that isn’t square. The objective is to fit the shape into the outline shown on the screen by manipulating the piece to turn 20 degrees either way, or by manipulating the piece up/down. As the game progresses, these types of puzzles have multiple layers to be solved before the hack is complete. Most of these puzzles have a certain amount of manipulations before players have ‘failed’ the hack – causing security to be alerted, as an example.
Overall, I enjoyed the visual representation of hacking done in a video game. Most hacking styled games that I’ve seen are ones that actually teach lines of code or would require QTE’s to succeed, where RoR tried their hand at showing how hacking could be incorporated into a story based game. While I found the sound puzzles annoying, the concept behind their inclusion was a nice touch to my impression of the game. 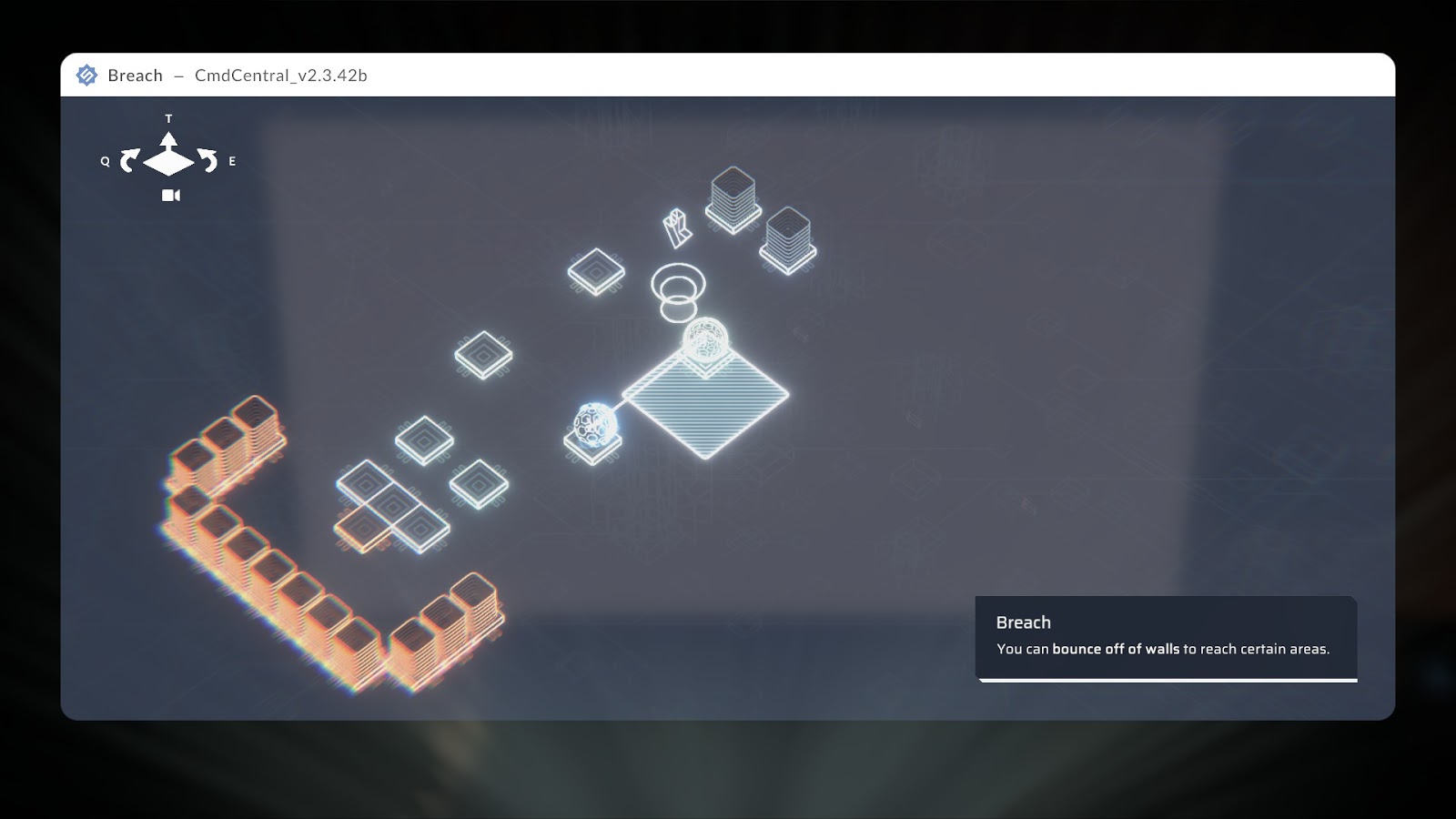 In RoR, the story is the driving force of the whole game. Players begin in Wilona’s apartment in OneCity where she is leaving to rendezvous with Luca. Their objective is to let the last human born child free of the scientists who’ve been trying to make sense of her existence. Wilona is one of the scientists which is why she knows of the child’s life – she interacts with her regularly. On the way out the door, Wilona receives a phone call from her mother, that players find out is the Minister. Players learn that she is calling because there are ‘terrorists’ in the city, which are threatening enough that the Minister has arranged for an escort out of the city. After calming her down, Wilona continues her initial plan of freeing the little girl before her escort arrives.

The tension between the two doesn’t go unnoticed, and further solidifies itself as a major issue when Wilona runs into some Bolts (security and escort) on her floor, leaving her with little time to escape unnoticed. In playing through the story, players are introduced to the hacking system and encounter system in the game. They are also presented with a variety of dialogue options that can be used to adjust the games course. And the whole while, players are simply trying to save this poor little girl stuff away in a lab somewhere… 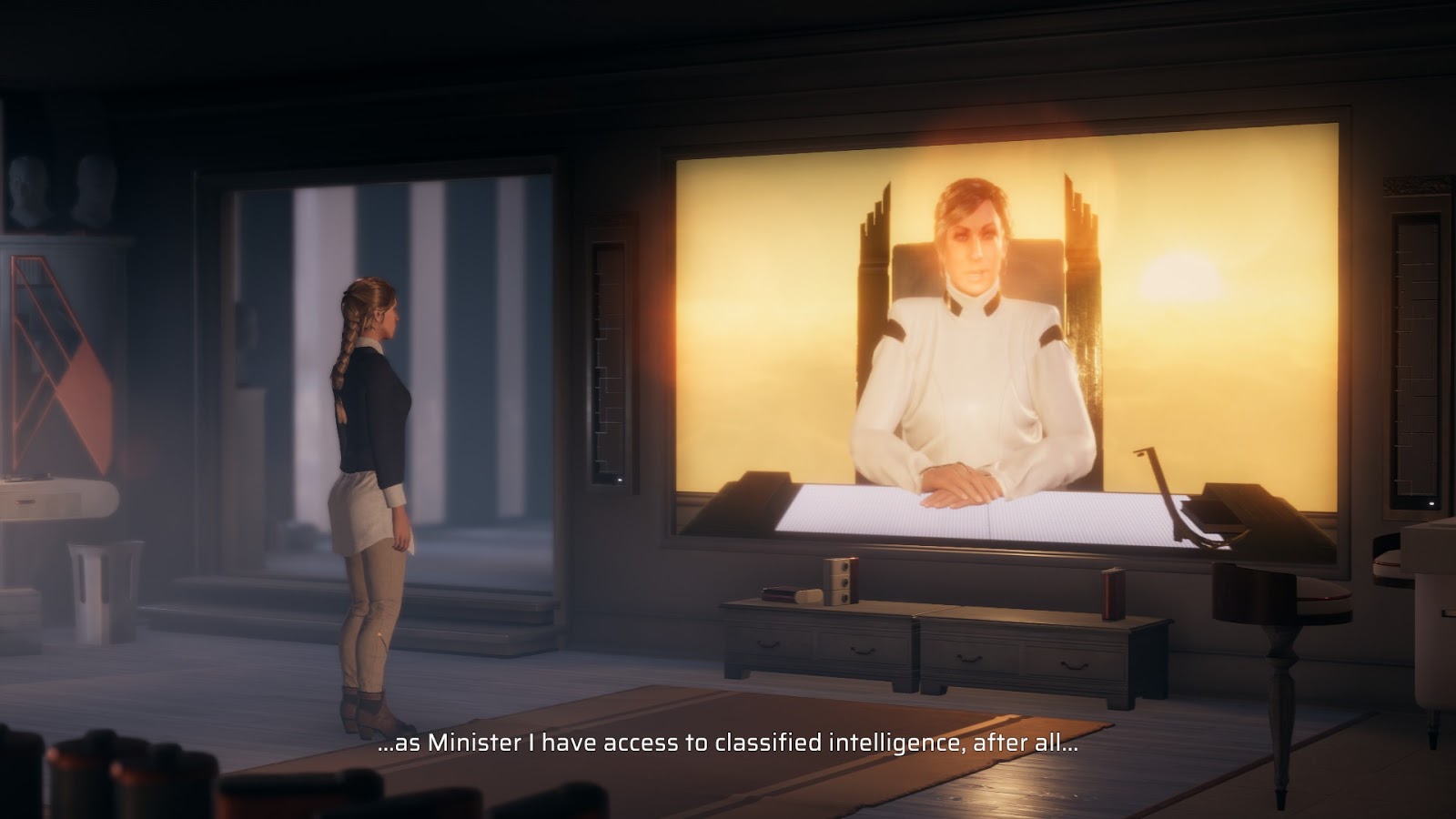 Along the way, are various characters that are well thought out and fairly three dimensional – at least for the time you interact with them. Throughout the story, players are able to interact with some of these characters, if they wish. Doing so will sometimes make sections of the game easier or harder depending on what players choose in dialogue. And I found that interacting with many of these characters shows that the world is well thought out. At first I had focused more on the hacking or the encounters but really, the story is what pulled me through all the way. In fact, by the end of the episode “Set Free”, I screamed at my computer because that should not be the way it ends! I need to know more! You can’t just leave us hanging like that! DAMN YOU (in a good way)!!!!!

Anyways, since I had that kind of reaction, it shows me that Lionbite Games has put together an excellent story that is engaging and different from others of its kind. I need the rest of these episodes to find out more about this world. NEED IT!

Overall, I am really glad to have played Rain of Reflection. It may be an episodic game but I absolutely enjoyed it. The graphics were extremely well done, the music was absolutely breathtaking, and the gameplay was unique. It's story is one that I need to see the end of, and I can't wait to see what happens to this universe. Because of my experience with the game, I'm going to give RoR an 8 out of 10.