AeternoBlade II is an improvement from its predecessor, and it still has a really solid gameplay mechanic as the primary hook. Beyond that mechanic however, is a game that may appeal to those who enjoy action / RPG Metroidvania style games but few others due to its rough edges.

It is really hard to talk about AeternoBlade II without at least briefly touching on the original game, which was designed for the 3DS initially. It worked best on that platform, because the visuals really did not feel at home on the big screen when it was ported to consoles later. I had hopes that with AeternoBlade II being made for consoles like the Xbox One, Nintendo Switch and PlayStation 4, the team would spend a bit more time with the visuals, honing them for their new homes. I have to give the team credit for crafting some interesting stage environments and doing some cool things with rotation that give the stages a bit of faux 3D depth, but the character models and animations remain pretty rough and the overall textures distract from what could have been exciting gothic styled backdrops.

These rough edges show up in the other part of the presentation as well – the audio. Not necessarily the music or sound effects, which are passable if not terribly memorable, but the really stilted voice acting. Of course, it does not help that the dialog is poorly written as well. Even in one of the character profiles I opened up, I noticed a malformed sentence due to grammatical / poor word choice error. Most of the time, I prefer voice acting in games, because it can lend a little extra dimension to how characters are perceived, but here I think it might have been better to just have silent characters with written dialog. The biggest issue I have with the dialog is how forced much of it is. Early on in the game, we have characters saying things to one another that… well, in reality they would probably never feel compelled to state. It is generally better to show how close characters are through organic situations, not having lifelong friends randomly spouting off that they are in fact lifelong friends. It is just awkward and takes me out of the type of mindset that they are trying to convey. 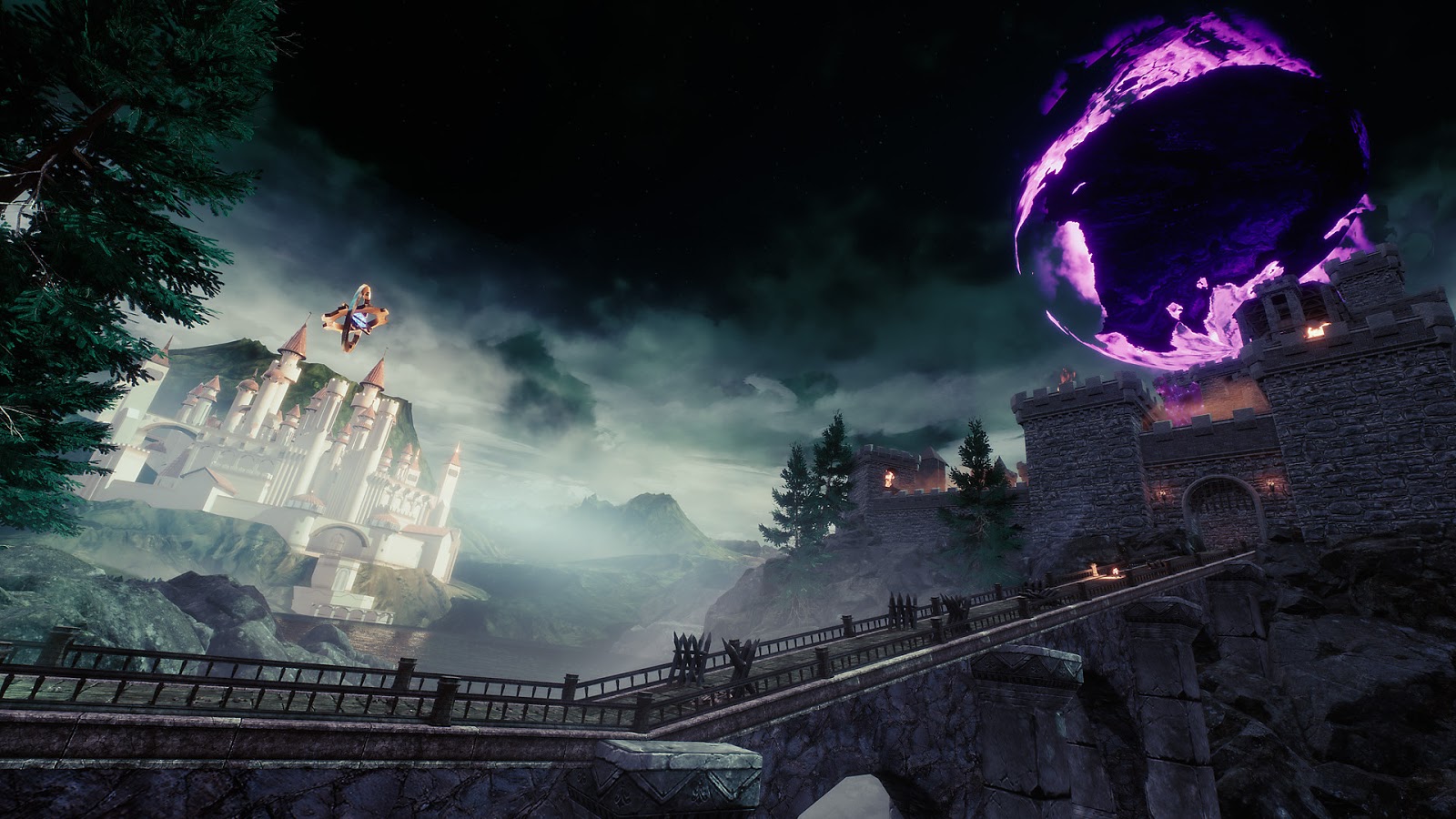 As for the gameplay itself, I refer to it as a Metroidvania title because the influences of those types of titles can clearly be felt in AeternoBlade II’s game design. There is a blend of 2D action with puzzle solving that can be pretty interesting, and is wrapped around the game’s primary mechanic. This mechanic is tied to the AeternoBlade, which allows you to essentially start recording your actions, and then break away from those actions before replaying them. The utility here is twofold, as it is heavily used in solving puzzles but also combat – especially with bosses.

Most of the puzzles are relatively straightforward, but they make great use of the record mechanic. One of the earliest ones in the game gives you a taste of this as you start recording and walk up to hit a switch that raises the door from below so you can access the treasure down there. Break away from your recording and watch as your recorded self hits the switch, leaving you free to go down and grab the object.

This mechanic comes in very handy during any fight really, but boss battles in particular. Usually I find myself starting to record and doing my best to wail away at a boss and inflict as much damage as possible, making sure that I do not get killed in the process – but otherwise not really worrying too much about how much damage I take in the process. Why? Because when I break from the recording, my actual life returns to what it was when I started it. I then try to navigate myself to the backside of said boss, who is engaged with my recorded self and allowing me to inflict oodles of damage safely from behind as both ‘versions’ of myself are beating on him. 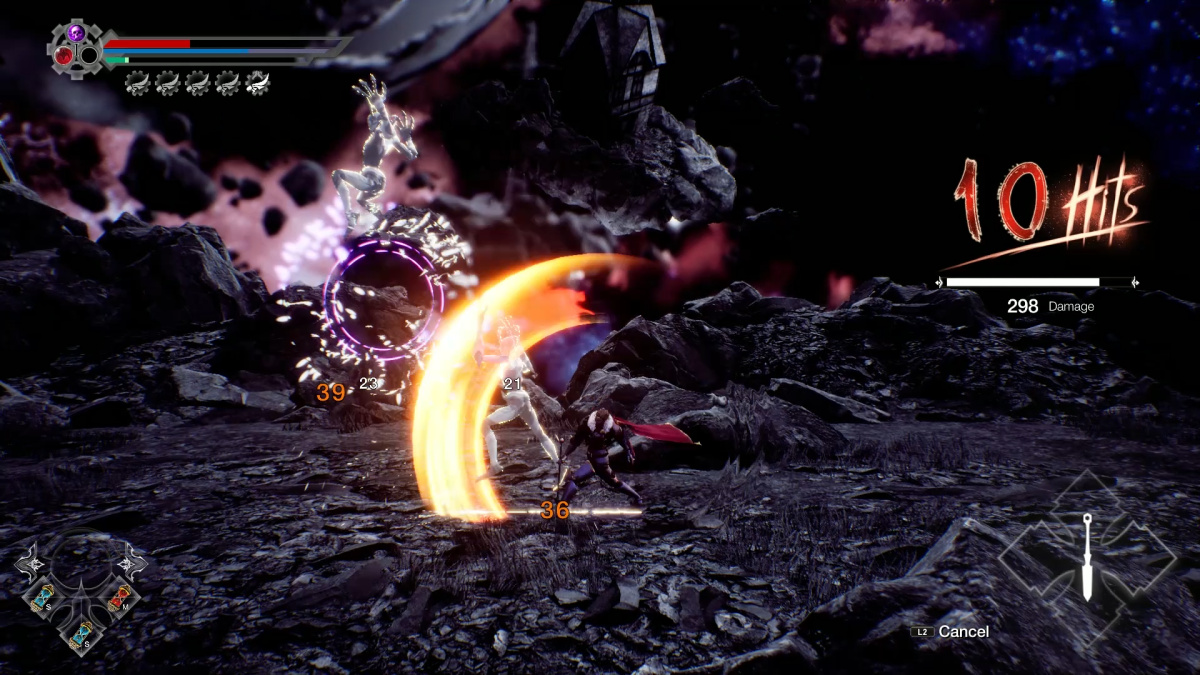 If this all sounds a little confusing, that is because it is a pretty interesting but also intricate mechanic that is probably easier to see in action than to describe. This is AeternoBlade II at its best really, as the combat itself is okay but nothing terribly special. You have characters who can attack, jump, dodge and so on. Enemies try to melee you at ground level, shoot at you from range or inflict death from above. AeternoBlade II is generally a 2D game, though it does try to inject some variety in the form of awkward 3D moments. Thankfully there is a lock-on option that makes it easier to keep your potential prey in front of you, but these sections do not feel as polished as the 2D ones. It works okay for specific boss battles, but feels clumsier when taking on a horde of enemies, and you never quite get comfortable trying to lock in on them. The 2D portions are more polished and less frustrating by far.

Thankfully there are some light RPG elements in how the three characters you use progress. You earn experience that lets you unlock upgrades, most of which do make things a little easier on you, but never really feel like they are unlocking a new world of possibilities. They simply make the protagonists slightly less likely to die, which is a good thing if not a terribly compelling hook. Still, I am a sucker for some kind of progression gameplay elements and AeternoBlade II is better for having them in there than not as it encourages exploration and experimentation. 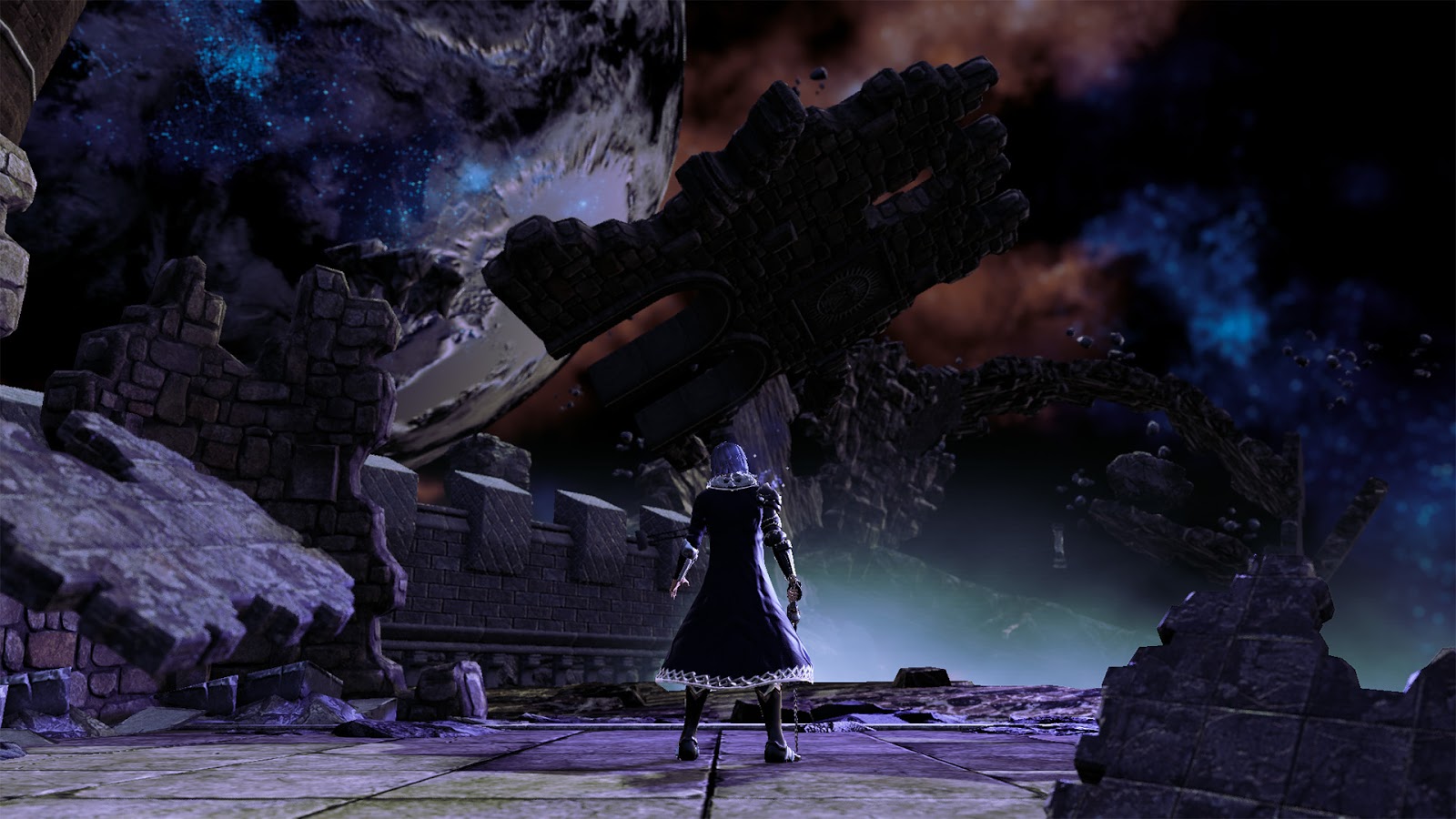 No one is going to mistake AeternoBlade II for a AAA effort due to its writing, voice acting and visuals, and that is okay if you are a fan of the Metroidvania genre enough to focus in on the gameplay. Here the gameplay is merely average by and large, though the time lapse / recording element is a really great twist that does elevate the experience a little. The ideas seem to be there, but the polish is lacking and there are better examples of the genre out there to be had.