To its credit, Ski Jumping Pro VR is actually an entertaining game that works pretty well as a virtual reality sport. However, as refined as the gameplay is, the relative lack of content does make bring into question the value of the overall offering.

So knowing that this had its roots in a mobile app originally, I was kind of skeptical as to how well this would work when ported over to the PSVR. Visually, I had high hopes, as it seemed easy to picture this title being rather engaging from a point of view. Add to it the use of motion controls, and before long I found myself working through the tutorial and enjoying the rather simple, but still interesting gameplay.

Basically, gameplay breaks down into three stages. The foremost is at the top of your run, where you wait for the green indicator that you can go. At this point, you watch the windsock and try to pick the perfect time for your launch. Then it is about sliding down the slope and heading towards the end of the upward end of the ramp. You need to time this part perfectly, as you want to be as close to the edge as possible without messing up. From there, you launch with a flick of the controls and position yourself to fly through the air with an objective of getting as far as possible. At this point, balance is the key as you watch for the on-screen prompts to make sure you are as even as possible while in-flight. Last but not least, you try to time the perfect landing. 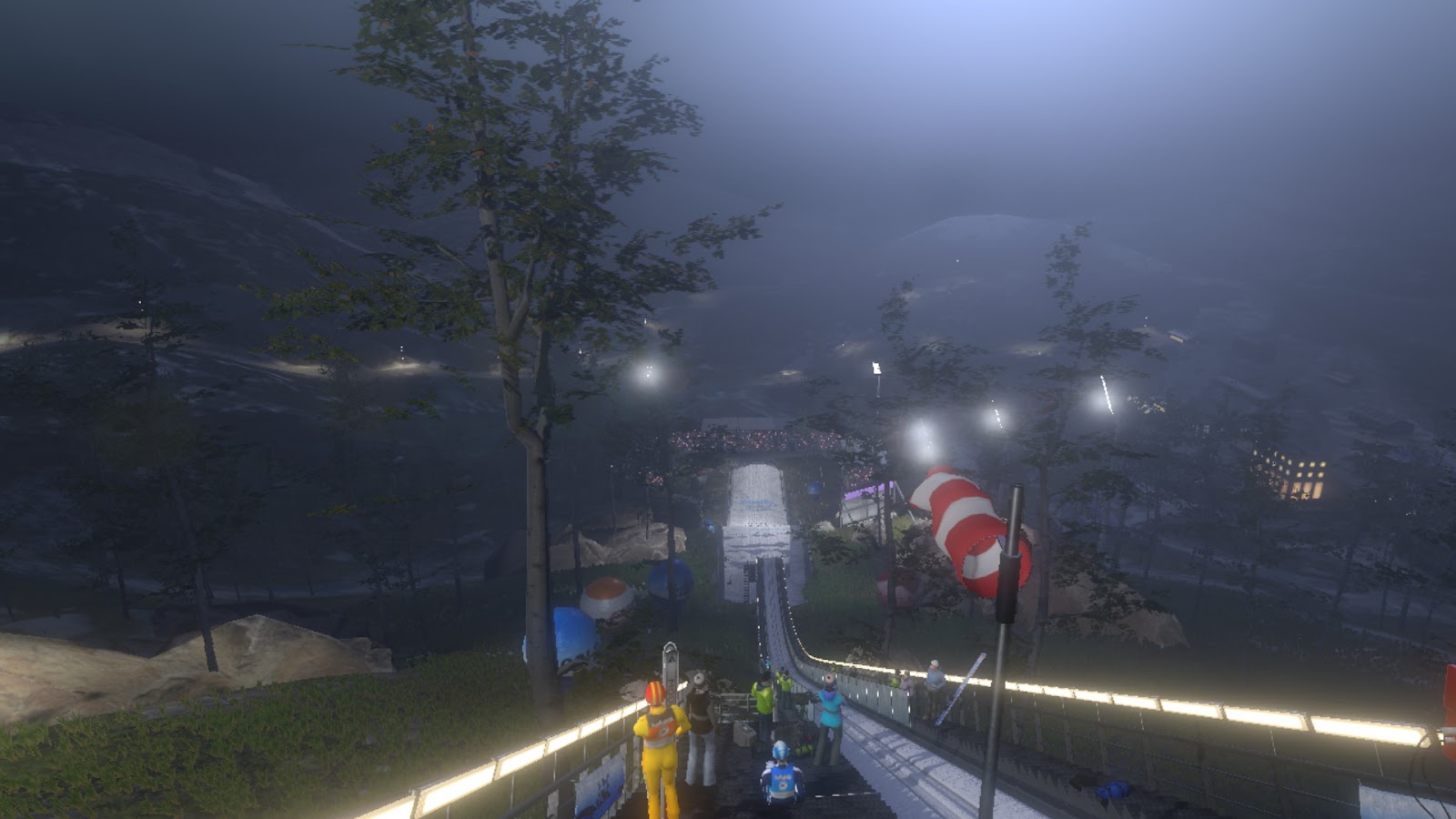 All of this can be done with the motion controls or a regular controller. From a precision standpoint, a regular controller works best (and also works far better for the menu navigation process). From an immersion standpoint, I preferred the motion controls (which you can use while standing or sitting). While the actual controller is a bit more precise, credit the developers for coming up with a quality control scheme that works well with motion.

In terms of the content and its structure, this is where the value proposition can come into question. Essentially it is the same basic motion over and over again. Three steps in fairly quick succession that leads to money earned. There is a free play and a career mode. The money you earn can get spent between sponsorships (which in turn earns you more money), training (which is like a character stat increase) and better equipment (which offers moderate boosts as well). It gives a nice bit of progression to dangle in front of you like a carrot, and combined with the tight, short gameplay bursts, it is pretty entertaining. It helps that there are a variety of venues, with unique backgrounds. They look pleasant enough, even if the textures on some things up close do show their limitations (like the skier on replays). Speaking of replays, they are not nearly as dynamic or interesting as the actual jump. I almost would have preferred a first-person option where I could move my head around and take things in a bit more slowly and safely, instead of only having that view during the part where you have to concentrate on the gameplay.

Does the VR view actually convey a sense of speed? Mostly, though like anything where there are other elements physically lacking (movement, cold wind against the face, etc) there are limitations to what the virtual environment can provide. Still, if you are a fan of ski jumping or just dislike actual sports outside in the cold (this would be me, by the way. I hate cold weather. I chose wisely, living in Michigan…) you will probably get more out of this offering. 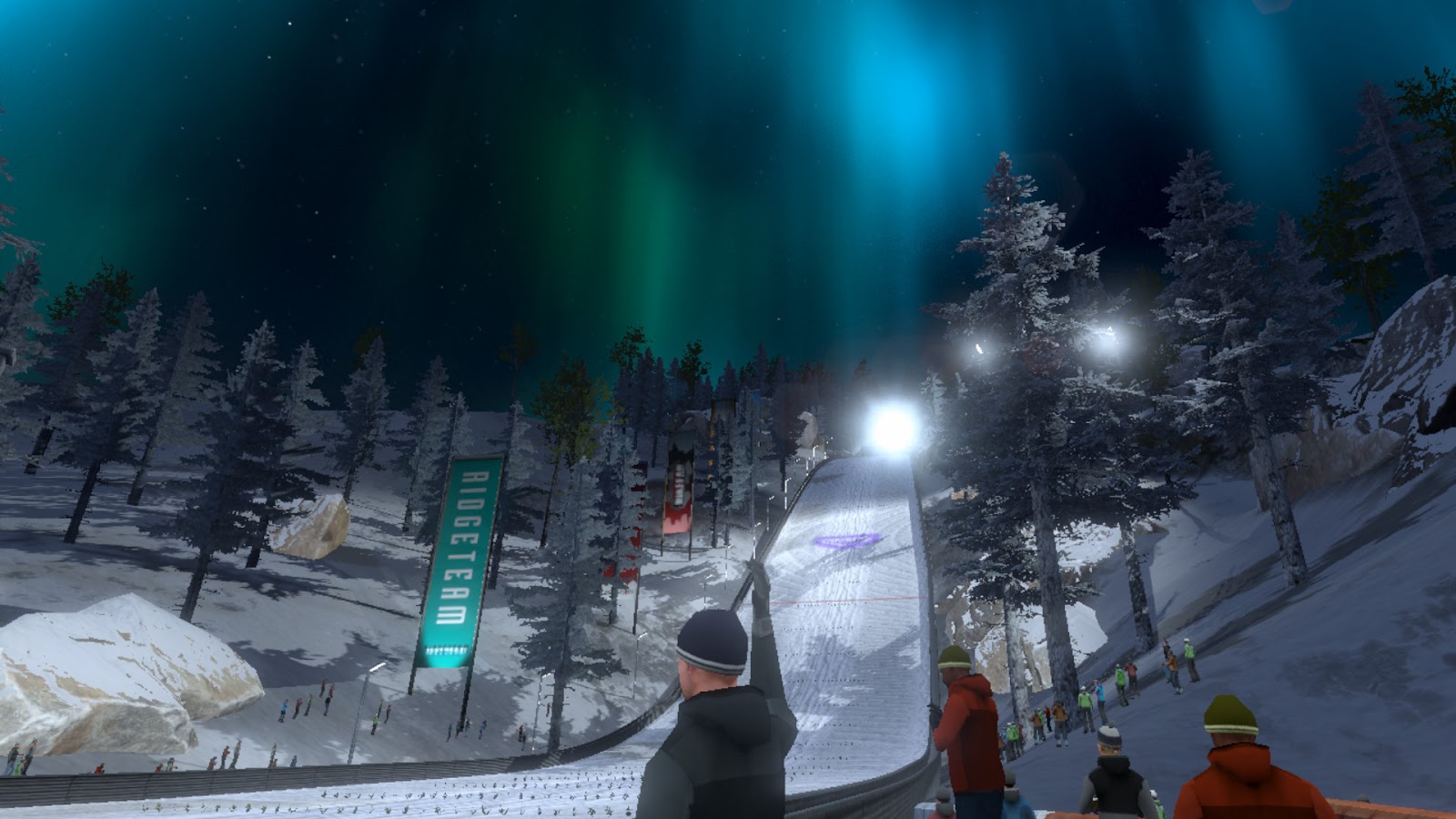 However, that leads into the biggest issue – ‘getting more’. The gameplay is in pocket-sized chunks. Once you learn the basics it never really evolves. While the environments are varied, it has little to no impact on the actual gameplay. Even though you will be performing the same basic movements over a hundred times, it is not a stretch to say you can complete the campaign mode in under two hours. It is not terribly difficult and there just is not much content there. You can do a new game plus campaign mode where your purchases carry over, which is nice – but really just more of the same with less of a challenge. As such, I would view Ski Jumping Pro VR as more appropriate at about half its price – something for potential fans to look out for should it go on sale. Or, it might have been nice to see the devs find another way / game / event that they could have applied to this. Some sort of winter games / broader skiing games than what is currently there. That would certainly provide more bang for the buck, and it’s pretty clear that the team at Yippee Entertainment has a good handle on this event, so I would love to see them try their hands at another.

Ski Jumping Pro VR offers bite-sized fun at a slightly higher price point than I can recommend. Even knowing that, what we have here is a slightly better than average effort that provides an enjoyable, if brief, VR experience.